The Satanic Temple comes to Boston

Devil worshippers for free speech? Not quite 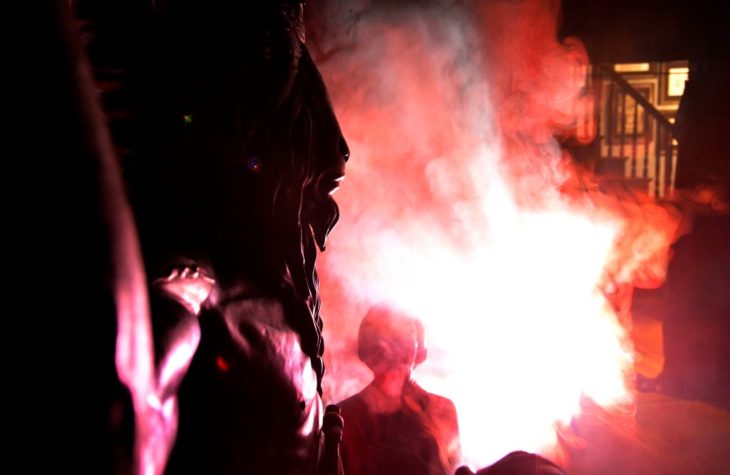 The Baphomet room bathed in lighting and fog as members of the Satanic temple walk by at the Satanic Temple where a “Hell House” is being held in Salem, Massachusett (Photo by JOSEPH PREZIOSO/AFP via Getty Images) 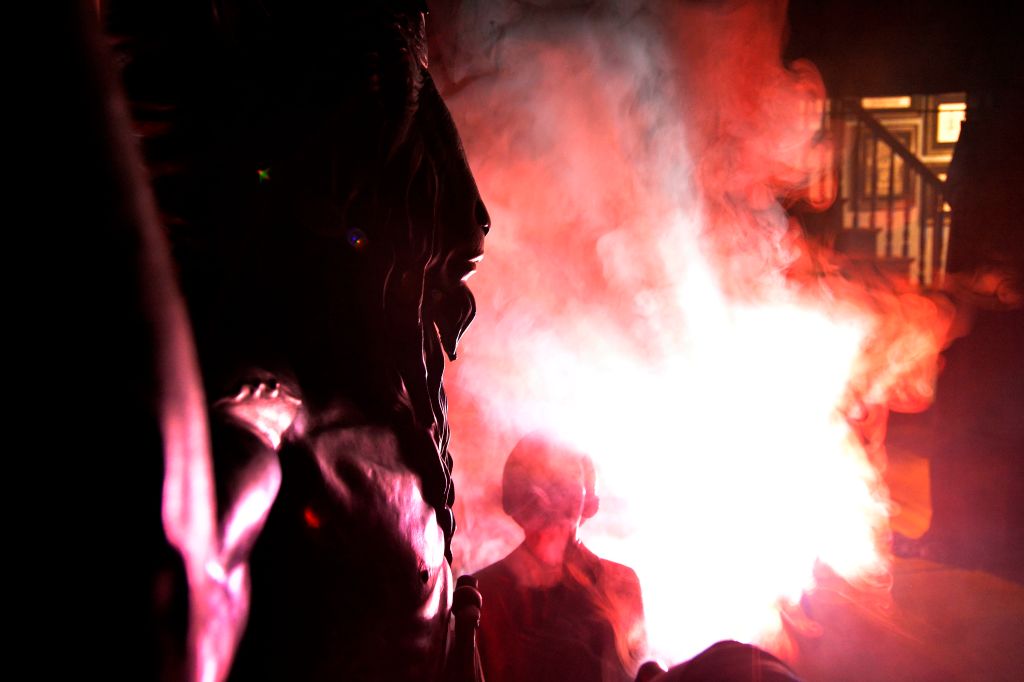 The Satanic Temple comes to Boston

The Satanic Temple is petitioning the City of Boston to fly their newly designed Satanic flag over City Hall. After a court ruled that the city had to fly a Christian group’s flag, the Temple insisted that it also had the right to display its banner during “Satanic Appreciation Week” from July 23 to 29.

According to Lucien Greaves, the Temple’s founder, “A public forum that allows for religious expression can either announce a dedication to religious pluralism or it can signal a decline into theocracy by allowing public representatives to dictate limits on the civic...

The Satanic Temple is petitioning the City of Boston to fly their newly designed Satanic flag over City Hall. After a court ruled that the city had to fly a Christian group’s flag, the Temple insisted that it also had the right to display its banner during “Satanic Appreciation Week” from July 23 to 29.

According to Lucien Greaves, the Temple’s founder, “A public forum that allows for religious expression can either announce a dedication to religious pluralism or it can signal a decline into theocracy by allowing public representatives to dictate limits on the civic capacities of some religious identities by exercising exclusive preference for others.”

If Mr. Greaves seems more interested in politics than religion, that’s because the Temple calls itself a “nontheistic religion.” They claim not to believe in a literal God — or a literal Satan, for that matter. They just use diabolical imagery to fight for free speech. 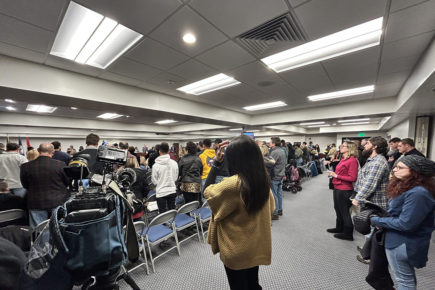 ‘Hail Satan’: a Virginia town at war over After School Satan Club

Hence their giant statue of the demon Baphomet. TST erected the idol at a courthouse in 2018 to counter a new monument to the Ten Commandments. Mr. Greaves said it wasn’t really a religious gesture. Rather, it was “a symbol of pluralism, legal equality, tolerance and reconciliation.” First Amendment, separation of church and state, etc.

For what it’s worth, I think the Satanic Temple is lying about their “nontheism.” A quick glance at their website (which I don’t recommend) shows that they very much believe in the supernatural. They’re devil worshippers. Yet either way, the Satanic Temple aren’t the brave freethinkers they claim to be.

The word “religion” itself comes from the Latin religiō, meaning something like “sacred duty.” The religious man seeks to act in accordance with the law of nature, to achieve harmony with the cosmos. It’s about doing right by God and one’s fellow man. It’s about justice. Now, you can believe all religion is a total crock. But our churches, no less than our courts, attest to a desire for justice.

It doesn’t matter whether you believe God gave Moses the stone tablets on Mount Sinai or whether you think a bunch of prehistoric Jews pulled the whole story out of thin air. The point is that those who try to follow the Ten Commandments are at least trying to be good.

Satan, meanwhile, is the most recognizably bad thing in human history. He’s the negation of the good for which Jews and Christians strive. Whether he really exists, or whether he’s a figment of the Hebrew imagination, that’s his only function. What does it say that the Satanic Temple takes him as its mascot?

The Satanic Temple evidently don’t believe that some statements are true and others are false. They certainly don’t believe that true statements deserve a greater hearing than false ones. They believe that both God and Satan — both the Ten Commandments and their opposite, their negation — should be considered equal. But what’s the point of “free speech,” then, if not for better ideas to triumph over weaker ideas in the intellectual area? I’ll tell you that too: it’s attention-seeking nonsense.

Like I said, I suspect the Satanic Temple does believe that Satan is real, and that they worship him. Its leaders do encourage people to sin — that is, to do the opposite of what Christianity teaches. I just wish they would come out and say it.

I’d almost prefer some sort of fundamentalist, evangelical Satanist — one of those who thinks of Lucifer as some kind of Promethean hero and finds Christianity morally repellant. He’d be as disgusted as we Christians are by the thought of Baphomet sharing a stage with the Ten Commandments.

He’d also be wrong, of course. He’d be wrong about practically everything. But at least he would be trying to be right. Then at least we could explain to him why he’s wrong.

As for Lucien Greaves, he’s not just making fun of Christians and Jews. He’s not just putting the Ten Commandments on their heads. He’s mocking the pursuit of justice and truth. He’s trying to destroy even the possibility of moral progress. He’s saying, quite explicitly, that the government should be indifferent to good and evil. And I’m afraid he’ll get his wish.

Michael Warren Davis is author of The Reactionary Mind. Subscribe to his newsletter “The Common Man.”