The Barr is raised

Many will be furious at the Mueller report’s findings. That’s a big problem for America 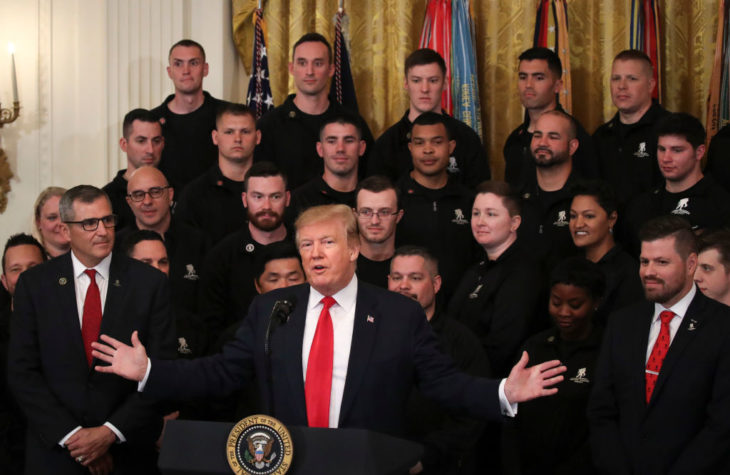 The Barr is raised

Thursday, and press report
And one clear call for me.
And may there be no moaning of the Barr
When we set out to see.

OK, Possums, here it is in redact and white (drum roll, please): The Mueller Report, 448 color-coded pages, replete with almost 900 redactions. Who says the government isn’t effective at education: over the last months it expanded the vocabulary of many Americans by putting that nice word into general circulation.

So quickly was the report edited and rushed into print that the Surgeon General’s warning against operating heavy machinery while...

Thursday, and press report
And one clear call for me.
And may there be no moaning of the Barr
When we set out to see.

OK, Possums, here it is in redact and white (drum roll, please): The Mueller Report, 448 color-coded pages, replete with almost 900 redactions. Who says the government isn’t effective at education: over the last months it expanded the vocabulary of many Americans by putting that nice word into general circulation.

So quickly was the report edited and rushed into print that the Surgeon General’s warning against operating heavy machinery while or shortly after dosing up on the report was omitted. So let me supply the defect and warn you: the report is boring. After Jerry Nadler’s commandos finish poring over it for dirt and discard the tome in frustrated disgust, the authorities are planning to collect the remaindered copies of the report and make them mandatory punitive reading in penitential institutions around the country.

The former newspaper known as The New York Times made a manful attempt to skew the results of the report, offering a pathetic ‘live analysis’ of cherry-picked excerpts. But Donald Trump is right. As anyone not named Bill Kristol has suspected for months, and known since the Mueller report was delivered to Attorney General Barr last month, it’s Game Over: finis, end of the line, thank you all for coming, the egress is just over yonder.

I understand that on the Left there will continue to be what Matthew (13:42) called fletus et stridor dentium: ‘wailing and gnashing of teeth.’ But, really, they should give it up. Just stop it. It’s over.

That was the take-away from Attorney General Barr’s comments this morning. Yes, Russia interfered in our election (as, he might have added, it has done since 1928, and just as, by the way, the United States does as well in the elections of other countries).

But, no, no American, including no one from the Trump campaign, colluded, conspired, or coordinated with the Russian efforts. Moreover, although Donald Trump was (rightly) enraged by the cataract of abuse he and his administration was subjected to, not least by the Mueller investigation, he never attempted to impede, hinder, or obstruct the investigation.

‘[T]he Special Counsel found no evidence that any Americans – including anyone associated with the Trump campaign – conspired or coordinated with the Russian government or the IRA [the “Internet Research Agency, a Russian company with close ties to the Russian government”] in carrying out this illegal scheme. Indeed, as the report states, “[t]he investigation did not identify evidence that any US persons knowingly or intentionally coordinated with the IRA’s interference operation.”’

In case that is not clear enough, Barr helpfully added this periphrasis: ‘Put another way, the Special Counsel found no “collusion” by any Americans in the IRA’s illegal activity.’

As if that were not bad enough, the Attorney General went on to observe that ‘the Special Counsel’s report did not find any evidence that members of the Trump campaign or anyone associated with the campaign conspired or coordinated with the Russian government in its hacking operations. In other words, there was no evidence of Trump campaign “collusion” with the Russian government’s hacking.’

And it gets even worse:

‘After nearly two years of investigation, thousands of subpoenas, and hundreds of warrants and witness interviews, the Special Counsel confirmed that the Russian government sponsored efforts to illegally interfere with the 2016 presidential election but did not find that the Trump campaign or other Americans colluded in those schemes.’

It was essentially the same story when it came to obstruction: ‘the evidence developed by the Special Counsel is not sufficient to establish that the President committed an obstruction-of-justice offense.’

Barr also offers an important historical comment. ‘President Trump,’ he notes, ‘faced an unprecedented situation. As he entered into office, and sought to perform his responsibilities as president, federal agents and prosecutors were scrutinizing his conduct before and after taking office, and the conduct of some of his associates.’

You remember that, right: way before Robert Mueller there was ‘Crossfire Hurricane’ and before that there was Bloviating John Brennan with his fantastic spook stories from Estonian, Australian, and British intelligence.

Then there was the media. ‘At the same time,’ Barr went on to observe, ‘there was relentless speculation in the news media about the president’s personal culpability. Yet, as he said from the beginning, there was in fact no collusion [my emphasis].’

That’s really the end of the story, But Barr added a dollop of human interest to his remarks. ‘[As] the Special Counsel’s report acknowledges, there is substantial evidence to show that the president was frustrated and angered by a sincere belief that the investigation was undermining his presidency, propelled by his political opponents, and fueled by illegal leaks.’

But here is the kicker: ‘Nonetheless, the White House fully cooperated with the Special Counsel’s investigation, providing unfettered access to campaign and White House documents, directing senior aides to testify freely, and asserting no privilege claims. And at the same time, the president took no act that in fact deprived the Special Counsel of the documents and witnesses necessary to complete his investigation.’ Again my emphasis, which I needn’t add to this conclusion: ‘Apart from whether the acts were obstructive, this evidence of non-corrupt motives weighs heavily against any allegation that the president had a corrupt intent to obstruct the investigation.’

I happen to have just seen an amusing production of Gilbert and Sullivan’s Gondoliers, and I came away admiring the deep wisdom contained in some of Gilbert’s lyrics, e.g.

I rather doubt that we’ll see a lot of ‘quiet, calm deliberation’ in the partisan feeding frenzy that is sure to greet the Mueller report and William Barr’s comments.

But here is the existential issue that the report confronts us with. William Barr observed at one point that ‘all Americans can and should be grateful to have [the president’s innocence] confirmed.’ And yet many people, far from being grateful, will be enraged. And that is a huge problem for the Republic.

What has happened over the past two-plus years is a fundamental attack on the legitimacy of our democratic republic. Tactical partisan maneuvering has overwhelmed the institution of presidential elections. Note that this is a one-party party. It probably started in earnest with the election of George W. Bush in 2000. Al Gore withdrew his concession and put the country through months of legal wrangling. Republicans were unhappy when Barack Obama was elected in 2008 and again in 2012. But there was no question of his legitimacy. But when Donald Trump won in 2016, the sort of antidemocratic forces that beset George Bush had mutated from an angry squad of activists into an army of deniers.

Should that substitution of weaponized tactical maneuvering continue to intrude upon the legitimacy of our elections, those elections will be decided less and less at the ballot box and more and more by interest-group jockeying, bribery, and intimidation.

In other words, it will remind us of the teeth in Ben Franklin’s response to the lady who encountered him after the Constitutional Convention and asked him what sort of government they had given the people. ‘A Republic, madam, if you can keep it.’