A crime still in progress

The Russiagate whistleblowers have blown their cover 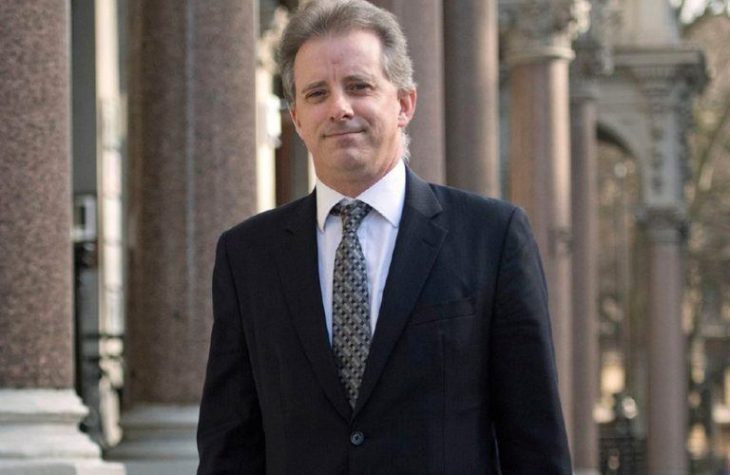 A crime still in progress

This article is in The Spectator’s January 2020 US edition. Subscribe here.Crime in Progress is, inadvertently, the cruelest book ever written about the American media. Its authors, Glenn Simpson and Peter Fritsch, are the two former Wall Street Journal reporters who founded the DC-based consultancy Fusion GPS. In 2016, the Hillary Clinton campaign paid them to use their former media colleagues to push a conspiracy theory smearing her Republican opponent, Donald Trump. The crime is still in progress.

To help top-notch journalists market the fantasy that one of the world’s most familiar faces was a secret Russian spy,...

This article is in The Spectator’s January 2020 US edition. Subscribe here.Crime in Progress

is, inadvertently, the cruelest book ever written about the American media. Its authors, Glenn Simpson and Peter Fritsch, are the two former Wall Street Journal reporters who founded the DC-based consultancy Fusion GPS. In 2016, the Hillary Clinton campaign paid them to use their former media colleagues to push a conspiracy theory smearing her Republican opponent, Donald Trump. The crime is still in progress.

To help top-notch journalists market the fantasy that one of the world’s most familiar faces was a secret Russian spy, Fusion GPS co-ordinated with the FBI to forge a series of ‘intelligence reports’. They attributed these lurid memos to a down-on-his-luck Brit, a former spy named Christopher Steele.

The interested punters included some of the biggest names in the business: the New York Times, the Washington Post, CNN, the New Yorker, even Yahoo! News. Eventually, they all endorsed Steele’s ‘dossier’.

Simpson and Fritsch ask us to believe that they and Steele are heroes for saving western democracy from Vladimir Putin. The media sustains this ludicrous cover story by obscuring mountains of evidence showing ‘Russian collusion’ to be a massive fraud on the American public. Crime in Progress intends to perpetuate that absurdity, but it incriminates its manufacturers by unintentionally confirming the four-year Get Trump operation.

Simpson and Fritsch boast that Fusion GPS waged a smear campaign against Devin Nunes, the California congressman who uncovered crimes and abuses in the FBI’s investigation of Trump and his aides. They confirm that Fusion GPS produced a 15-page report on the Trump circle a month before Steele filed his first memo on June 20, 2016. That earlier Fusion GPS report alleged that the Trump team had ties to Russian organized crime. By contrast, Steele’s first memo claimed that Trump’s presidential campaign was clandestinely working for Russia. The sudden shift of focus suggests that Steele was hired and his work tailored to win the FBI a Foreign Intelligence Surveillance Act (FISA) warrant for spying on the Trump campaign.

Russiagate aficionados will find little new in Crime in Progress. There is no fresh evidence for collusion or any of the cartoonish claims that Fusion GPS pushed on behalf of the Clinton campaign. Those let down by Rachel Maddow’s nightly prophecies of Trump’s doom will again be disappointed.

Then again, this book’s intended audience is not the public, but the large ensemble of media operatives who helped stage Russiagate. Crime in Progress is a promptbook in case the players blow their lines, especially now the spotlight is on their unsuccessful performances.

The anti-Trump plotters are under new pressures from US attorney John Durham’s criminal investigation and the Department of Justice report on FISA abuses in the FBI investigation. These implicate as lawbreakers not only former senior officials, but also the media accomplices who facilitated crimes by leaking classified information.

Durham’s investigation and the DOJ inspector general’s audit probably won’t convince journalists to reassess the Trump-Russia narrative in which they have invested the prestige and fortunes of the media. But there are signs that the media is starting to feel the cost of dumping poison into the information ecosystem.

Large parts of the public say they struggle to judge the big events shaping their lives. With impeachment in the news, readers and viewers confess they do not know whether there is merit to the allegations that Trump bribed or extorted the Ukrainian president, or to whatever charges Representative Adam Schiff & Co. are cooking up to dirty Trump before the 2020 election.

The New York Times touchingly reports a reader’s complaint: ‘I don’t know that I’m getting the facts from the media right now.’ But the journalists can’t imagine why Americans say they’re in the dark. The Washington Post’s media columnist Margaret Sullivan even blames the public for no longer trusting outlets like hers, which published Fusion GPS’s Trump-Russia nonsense. For the philosophers at Vox, it’s ‘tribal epistemology’, or listening only to your own side — which explains why, after three years of Russiagate, news consumers are not falling for Ukrainegate.

It wasn’t Fox News that spent $40 million and hired dozens of DOJ lawyers and FBI agents for a special counsel investigation that found no evidence of collusion. It was former FBI director Robert Mueller. It’s hardly breaking news that much of the US public distrusts an openly politicized press. What’s changed is that half of America has seen evidence that the media participated in a political operation to topple the president they elected.

Team Collusion’s strategy is to keep feeding exculpatory fan fiction into the news cycle so as to discredit the inspector general’s report and Durham’s investigation as politicized attacks on upright public servants. Selling this narrative requires unit cohesion.

To enforce it, Simpson and Fritsch populate Crime in Progress with the names of some of the more expendable journalists who used their product. The identities of the dozens of other Fusion GPS delivery mechanisms at major media brands like NBC, Politico, CNN, the Washington Post and the New York Times will continue to be protected, so long as they don’t break ranks.

The ultimate effect of Fusion GPS’s information operation, of which Crime in Progress is the latest installment, will be to harden the country’s political divide, delineated by what we might call the Simpson-Fritsch Line. On one side is the national elite and an intelligentsia whose commitment to a conspiracy theory proves they will promote any lie from which they stand to benefit. On the other are those who perceive themselves as the target of a destructive confidence scheme, a class of voters increasingly aware that they are being disenfranchised because their fellow Americans hold them in contempt. The fabric of our peace is tearing.