Seasonal vegetables are a secret weapon in the fight against crime 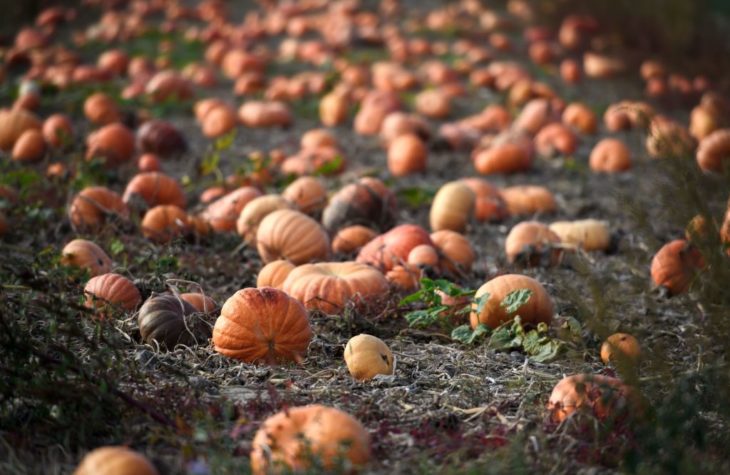 Tall and thin — a little stooped, his moustache and the thatch of his hair starting to show a little white — Lowell Gerry was putting out pumpkins this past week. Dozens and dozens of the things: round ones and flattened ovals. Bright orange ones, as neon as DayGlo, and deeper colours edging toward a reddish brown. A range of albino pumpkins, too, like pale sickly ghosts. Like vegetable lepers.

They seem to sell fairly well. Last Tuesday, before the first snow dusted eastern South Dakota over the weekend, two or three other shoppers stopped by...

Tall and thin — a little stooped, his moustache and the thatch of his hair starting to show a little white — Lowell Gerry was putting out pumpkins this past week. Dozens and dozens of the things: round ones and flattened ovals. Bright orange ones, as neon as DayGlo, and deeper colours edging toward a reddish brown. A range of albino pumpkins, too, like pale sickly ghosts. Like vegetable lepers.

They seem to sell fairly well. Last Tuesday, before the first snow dusted eastern South Dakota over the weekend, two or three other shoppers stopped by in the 15 minutes I was there to look for a few of the harvest’s last green tomatoes. It’s Halloween, of course, that incites the pumpkin fervour. The town of Madison is not exactly tiny, by rural standards. A county seat surrounded by farms, it has around 6,500 people, and like many such not-quite-small Midwestern towns, Madison devotes considerable effort to Halloween. Only Christmas outshines the October holiday. The residents say it’s for the children, but, then, adults often say such things.

The Halloween preparations need a lot of pumpkins, so Lowell and Terri Gerry keep a small stand in Madison, hauling in part of the harvest from their farm out in the county. It’s up at the top of Egan Avenue, just past the college, and most of the time the stand is unattended. Just a trestle table loaded with vegetables and a yard crowded with pumpkins. A sign chalked with prices and a box into which customers can put their money. Some plastic bags, recycled from grocery shopping. And the health of civilisation is measured by such things.

Call it the Farm Stand Test. From the sidewalks of Shanghai to the market squares of small English towns, the hipster street fairs of gentrified Brooklyn to the decidedly unhip vegetable gardens of the American Midwest, an easy gauge of social capital is simply this: one can set out pumpkins for sale, walk away, and reasonably expect people to pay for what they take. Reasonably expect that vandals won’t smash the pumpkins just for the excitement of destruction. Reasonably expect that no one will steal the money in the wooden box.

The Farm Stand Test expresses the second half, the flip side, of the ‘Broken Windows’ theory of public safety given its best-known form in a 1982 Atlantic article by George L. Kelling and James Q. Wilson. As a sociological account of the ways people share physical spaces, Kelling and Wilson’s work was fascinating. Drawing on a set of older studies, the authors argued that small disorders — graffiti, broken windows, uncollected trash — send a signal that an area is outside the protection of civil society.

The number of crimes may increase as a result, but the theory holds that greater damage to the social order comes from those who aren’t criminally minded. Taught by small signs of disorder to believe an area is unsafe, people grow fearful. They hurry through public spaces as quickly as possible and so devote less time to local maintenance. They feel less solidarity with their neighbours and so offer less help to injured victims of crime. They doubt that government cares about their welfare and so come to feel a constant resentment about the political arrangement of their society.

After a brief vogue for Broken Windows policing in the 1990s, especially during William Bratton’s tenure as New York City’s police commissioner while Rudy Giuliani was mayor, the theory has had more critics than defenders. And rightly so. Minor crimes, such as subway-turnstile jumping and littering, were deterred, but studies failed to show a firm connection to decreases in major crime. As applied by police, the theory resulted in ‘stop and frisk’ and ‘zero tolerance’ procedures disproportionately directed toward minorities. Law enforcement proved an insufficient substitute for what Kelling and Wilson (and Jane Jacobs, before them) understood as the civility created by the attention of people in a neighborhood.

As a measure of public virtue, a Farm Stand Test would skip past what Jacobs called ‘eyes on street’ — an informal mechanism for preventing crime that seems applicable mostly to busy mixed-use areas in big cities, with many people, interested in their neighbourhoods, keeping tabs on that’s happening on their sidewalks. There’s a hypocrisy in those who admire the idea of Jacobs’s concerned urban street watchers while sneering at what they imagine are prissy small-town busybodies, spying on their neighbors through starched white-lace curtains.

The truth is, in a Midwestern place like Madison, South Dakota, there just aren’t enough eyes on the street to achieve either the urban civility the Broken Windows theorists seek or the stultifying Peeping Tom world imagined by the cultural despisers of small-town life. I could easily have stolen my vegetables from Farmer Gerry, with no one else the wiser. Or from the lonely melon stand out toward the edge of town. Or the Prairie Village display a little ways down Highway 81. No one would have known. No one would have seen.

Which is the point, isn’t it? Manners and morals are indicated best by what we do when no one else is watching. And public virtue, the social capital of a civilisation, is demonstrated by the individual behaviour of those stopping by an unattended farm stand. Midwestern American life is no pinnacle of civilisation. But at its best, a place like Madison, South Dakota, does suggest that the enforcement of law is much less powerful than the teaching of virtue. The Farm Stand Test suggests that how culture shapes us matters more than how we are policed.