How long can Russia stay in this fight? 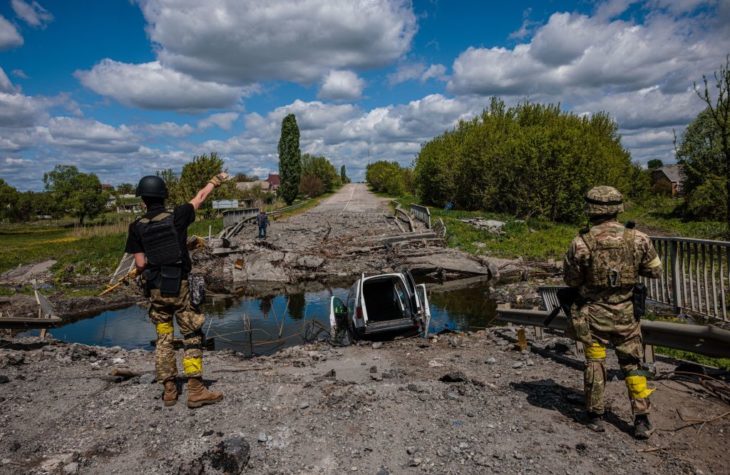 TOPSHOT – Soldiers of the Kraken Ukrainian special forces unit talk to a man at a destroyed bridge on the road near the village of Rus’ka Lozova, north of Kharkiv, on May 16, 2022 (Getty Images) 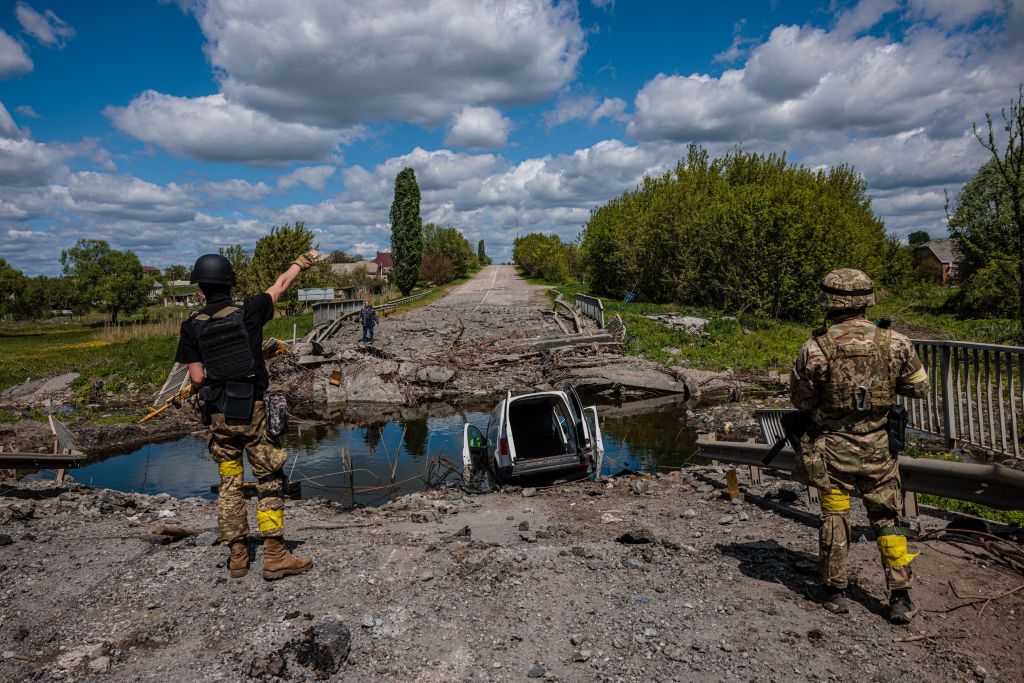 How long can Russia stay in this fight?

The sheer complexity of the war in Ukraine can mask its most important features. So let’s cut through the complexity and focus on where the combatants now stand, how they got there, and what is likely to happen next.

The central point is one we all know: Ukraine has prevented a Russian victory but has not yet won the war. There is still hard fighting to come, but the battlefield is increasingly tilted in Ukraine’s favor. Vladimir Putin wanted to seize the capital, decapitate the Zelensky regime, install a puppet government, and control as much of...

The sheer complexity of the war in Ukraine can mask its most important features. So let’s cut through the complexity and focus on where the combatants now stand, how they got there, and what is likely to happen next.

The central point is one we all know: Ukraine has prevented a Russian victory but has not yet won the war. There is still hard fighting to come, but the battlefield is increasingly tilted in Ukraine’s favor. Vladimir Putin wanted to seize the capital, decapitate the Zelensky regime, install a puppet government, and control as much of the country as he could, incorporating some of that territory into Mother Russia and establishing “independent” republics in the rest. Not only did he fail militarily, he united the Ukrainian people in fierce opposition, including those who speak Russian, live near the border, and once favored Moscow. This broad opposition forged a nation and marks a significant change since Russia’s seizure of the Crimea and Donbas region in 2014.

Putin’s invasion and Ukraine’s resistance has three immediate consequences. First, it has fueled the fighting spirit of all Ukrainians, led by a smart, tenacious army and Churchillian president. Second, it means that, outside Crimea, Russia can only control the territory it seizes with a permanent occupying army. That’s expensive and dangerous. Third, it dashes any hopes Putin may have had for ruling the country with a proxy regime that could defend itself.

Putin also failed in his larger diplomatic aim: fracturing NATO. Worse for him, he managed to reactivate the sluggish alliance, solidify it behind Ukraine, and prompt the addition of two more countries, Finland and Sweden, both with histories of neutrality. Finland’s membership in particular poses a major strategic challenge for Russia, since they share an 870-mile border, which comes near St. Petersburg.

Equally important, NATO’s war aims have expanded as the fighting has continued. Initially, most NATO members expected a swift Russian victory and, after that failed, simply hoped Russia would not conquer the country. Seeking Russia’s complete defeat, they feared, might provoke a trapped Putin to use weapons of mass destruction. That fear has not disappeared — or, at least, it shouldn’t have. No one knows if a cornered Putin might use chemical weapons or even small battlefield nuclear weapons.

Despite the risk, NATO has slowly shifted its preferences in favor of Ukrainian victory, thanks to Ukraine’s success on the battlefield, Russia’s horrific (and very visible) war crimes, and the Kremlin’s stated goal of seizing territory beyond Ukraine. Opinions within the alliance vary. Britain and NATO’s east European members are most vocal in supporting these expansive aims; France and Germany most cautious. But the cleavage has not blocked NATO’s powerful support — military and diplomatic — for Kyiv.

That support goes well beyond NATO. Some forty countries are now working with Kyiv, including some, like Israel, that once sought to remain neutral. (Israel hoped to maintain its working relationship with Russia to constrain Iran’s terrorist proxies in Syria and Lebanon.) Almost no countries are supporting Russia. Even Belarus, a neighbor and subordinate ally, has expressed doubts about the war and refused to send forces to fight in Ukraine. Russia’s chief geopolitical ally, China, is reported to be deeply concerned about the failed war and its reputational impact on Beijing. It has refused to provide Moscow the economic and military aid it desperately needs.

Meanwhile, most of Ukraine’s allies are squeezing Russia with sanctions on trade and banking. The main gap in those sanctions remains oil and gas. Although the world’s reliance on Russian energy is diminishing and Moscow has been forced to sell its oil at a discount, the Kremlin’s income is still large enough to fund the war.

The most important sanctions, aside from frozen banking assets and tightening restrictions on energy, are the prohibitions on selling computer chips to Russia. Those are essential for building and repairing modern weapons, and Russia has no way of manufacturing its own, even if it steals the intellectual property. It has been reduced to cannibalizing washing machines to find chips to fix damaged weapons.

Russia’s loss of those weapons, pilots, and soldiers, including more than ten general officers, has been massive and completely unexpected. The losses are devastating for a military that relies on top-down command and overwhelming numbers on the battlefield. Those numbers were shredded in the fight for Kyiv. The battle groups crippled in that fight have been redeployed to eastern and southern Ukraine, but they are depleted and demoralized. Reliable reports are that Russia has lost about one third of its ground forces so far, an astonishing and unsustainable rate of loss. Equipment losses are equally severe and irreplaceable.

Faced with these losses, Russia has sharply curtailed its strategic goals. Its main aim now is to consolidate control over two provinces in eastern Ukraine’s Donbas region: Luhansk and Donetsk. If Russia can consolidate control there and expand it southward through Mariupol, it can form a continuous land bridge from Russia to Crimea, which it seized eight years ago. It expected to accomplish that goal soon after launching the invasion in February, but it has still not done so.

Russia’s secondary objective is to expand its reach west from Crimea to incorporate Ukraine’s major Black Sea port, Odessa. The loss of Odessa would leave Ukraine landlocked, with no easy way to export its massive grain crops and no cheap way to import consumer goods.

Let’s consider both Russian objectives, starting with the drive for Odessa. To take that port, Russian forces must move westward from Crimea and Kherson, which is just north of Crimea. Their ground assault on the port city would be supplemented by an amphibious landing, plus shelling from Russia’s Black Sea fleet.

The major obstacle to the land assault has been the city of Mykolaiv, which lies between Crimea and Odessa. The city’s defenders have completely repelled the Russian advance, prevented them from crossing the wide Inhul River, and actually retaken some territory to the east, approaching the city of Kherson.

Since Ukraine lacks a navy, Russia might have expected its fleet to remain invulnerable. Not so. Ukraine’s land-based missiles and armed drones have caused devastating losses and forced Russian vessels to back well away from shore. There’s no chance of any amphibious assault.

Despite these Ukrainian successes, it still faces important limitations on the southern coast. The most important is that Russia can still block all seaborne trade through Odessa. That blockage not only hurts Ukraine, it also damages the world economy, because Ukraine is such a huge grain exporter. The second limitation is that Ukraine has been unable to attack Russia’s surface ships and submarines when they dock in Sevastopol, on Crimea. That harbor is far beyond the reach of Ukrainian artillery and well protected, so far, against drone and missile attacks. Finally, Ukraine’s gains in the Kherson oblast are still small. If Ukraine manages to take more territory there, it would put Crimea and the naval base at Sevastopol at risk.

Important as this fight on the southern coast is, the main fight is still in the north and east. After Ukraine won the battle for Kyiv, combat shifted 300 miles eastward to Kharkiv, the country’s second largest city. That city, which had 1.5 million residents before the war started, is near the country’s northern border and close to the Russian city of Belgorod, the logistics base for Russia’s fight in the east.

Putin’s goal in Kharkiv was the same as in Kyiv: envelope the city, destroy as many people and structures as it can, cut off the Ukrainian army, and capture or kill them. That effort failed as completely in Kharkiv as it did in Kyiv. In both cases, Ukrainian forces prevented envelopment, cut off Russian logistical supplies, pushed the enemy out of artillery range of the city, and began to reconquer surrounding territory. As Russia retreated, it pursued its standard, scorched-earth program of killing civilians and destroying homes and buildings, leaving their own battlefield dead scattered on the streets and setting booby traps for civilians who returned. Wall-to-wall war crimes.

After repelling the Russians from Kharkiv, Ukrainian forces are now advancing toward the Russia border. Instead of digging in for a fight, Russia is withdrawing its troops and equipment and repositioning them to protect its supply lines to the Donbas. Those lines run from Belgorod to the Ukrainian city of Izyum. Ukraine’s likely goal is to cut those lines at Voychansk, near the border, and Kupyansk, further south and east. Russia will fight ferociously to keep Ukrainian artillery beyond the range of those cities and prevent their drones from destroying road and rail links. After that, the fight it likely to shift to Izyum, on the Donets River, currently under Russian control.

It’s not all defense for Russia. Their army is staging one offensive push, hoping to encircle some Ukrainian forces in the Donbas region, between Popasna (in the south) and Bilohorivka/Rubizhne/Severodonetsk (further north). Russia is making some progress there, forcing Ukraine to choose between reinforcing its army or withdrawing them and ceding the territory.

There is hard fight to come in the Donbas, where Russia has the advantage of defensive positions, but Ukraine has far better weapons, intelligence, resupply, and motivation. The looming question is how long Russia can stay in this fight as its army continues to lose vast numbers of men and material and its economy struggles — and fails — to replace them. Meanwhile, NATO’s powerful, long-range weapons are now reaching the frontlines. Those weapons, combined with good intelligence and precision targeting, should shift the advantage to Ukraine, whose outnumbered forces are determined to win back their country.