Unlike their liberal cousins in America, Jews in Israel much prefer the Donald to his predecessor 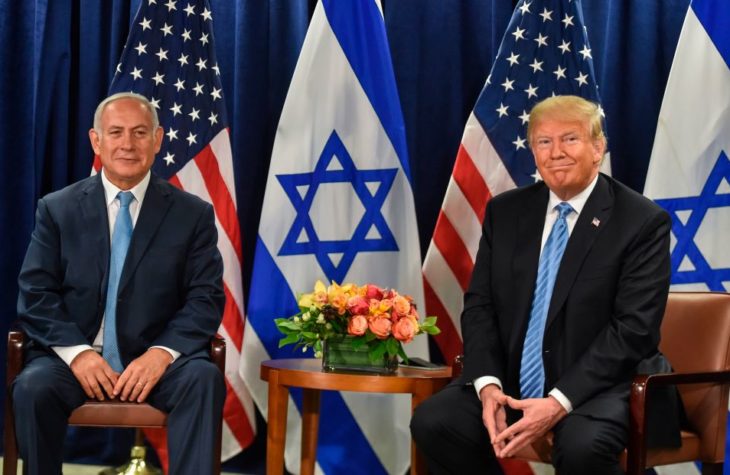 I spent the Jewish High Holidays this year attending services at Temple Micah on Wisconsin Avenue in Washington, DC, a congregation affiliated with the liberal Reform Movement. Its cognitive-elite-type members include prominent policy intellectuals, a lot of law degrees from Yale and Harvard, media types from the Washington Post, CNN, etc. And while they may disagree on whether Elizabeth Warren or Cory Booker would beat him on 2020, they all share one thing in common: they hate, like really hate, in a quasi-pathological way (you know what I mean) President Donald Trump and anyone and...

I spent the Jewish High Holidays this year attending services at Temple Micah on Wisconsin Avenue in Washington, DC, a congregation affiliated with the liberal Reform Movement. Its cognitive-elite-type members include prominent policy intellectuals, a lot of law degrees from Yale and Harvard, media types from the Washington Post, CNN, etc. And while they may disagree on whether Elizabeth Warren or Cory Booker would beat him on 2020, they all share one thing in common: they hate, like really hate, in a quasi-pathological way (you know what I mean) President Donald Trump and anyone and anything associated with him.

Say something nice about the American economy under Trump and you’ll get that ‘are-you-a-Nazi-or-something?’ kind-of-look from the ultra-progressive congregants who accept it as a given that the elderly grandfather of three little Jewish kids residing in nearby 1600 Pennsylvania Avenue is ‘like Hitler’ (the more moderate members could live with the Mussolini or David Duke analogies).

But then that President Trump also happens to be the BFF of the Israeli Prime Minister Benjamin ‘Bibi’ Netanyahu and probably the most pro-Israeli American politician to occupy the House since LBJ (who gave Israel the green light to attack Egypt in 1967) and before him, President Harry Truman (who had recognised the Jewish State immediately after its establishment in 1948) does not seem to fit into the the liberal Jewish narrative that turns the Donald into El Numero Uno Enemy of the Jewish People.

So Rabbi Daniel Zemel, the Chief Rabbi of Temple Micah set out to resolve the cognitive dissonance facing liberal American Jews, at a time when their old political allies in the political left seem to be distancing themselves from Israel while Trump and his right-wing supporters profess their love to the Israeli people and their PM.

In the sermon he delivered on Rosh Hashanah (the Jewish New Year), Rabbi Zemel explained to members of his flock that the main threat to the Enlightenment Project and Western interest are not, Allah Forbid, radical Islamists spreading hate and destruction in Europe or the Ayatollahs in Tehran and their nuclear program, but — you guessed it — Donald Trump’s America: racist, misogynist, homophobic, Islamophobic, and, oops…pro-Israeli.

And on Judaism׳s holiest day, Yom Kippur, Rabbi Zemel chose to deliver a blistering criticism of Benjamin Netanyahu’s Israel, and what he described as the rise of nationalist extremism religious intolerance in the Jewish State, the stalling of the Israeli-Palestinian peace process by the Netanyahu government, and the growing ties between Israel and illiberal governments in Poland, Hungary and elsewhere.

From the perspective of Rabbi Zemel, who last year dismissed First Daughter Ivanka Trump and her husband, Jared Kushner as ‘Court Jews,’ and many other liberal American Jews there is something very un-kosher about the love affair between Israel and the American President they love to hate. If only, if only, their matinee idol, Barack Obama was still occupying the White House and Israel was governed by, well, by whom actually?

Two weeks after Rabbi Zemel delivered his Yom Kippur sermon I was shopping for t-shirts in the Castro clothing store in Tel Aviv (no relationship to the late Fidel) where the young salesperson, Dina, explained to me why she and her friends have never liked ‘Hussein’ Obama and couldn’t understand why her Jewish friends in New York were so mesmerised by him. The dark skinned daughter of a Yemenite father and a Moroccan mother, she added that she was actually ‘blacker’ than Obama. ‘We also have Jews from Ethiopia here and we don’t need lessons from Americans about racism,’ she suggested, adding: ‘Israel, Apartheid state? Mona, my Arab friend who works here makes money more than I do.’

And then we move to discus Obama’s successor in the Oval Office, and Ivanka, and Jared and the relocation of the American Embassy from Tel Aviv to Jerusalem, the revoking of the nuclear deal with Iran, Trump’s visit to Israel, and his friendship with Bibi — the defender of Israel and the West — and Dina sounds like a teenager raving about her favorite film star. ‘We are meshugaim (crazy) about him and Ivanka here,’ she raised her voice, as other shoppers smiled and nodded with approval. ‘He is like our Cyrus’ (the Persian King that allowed to Jews to return from Babylon to Jerusalem and rebuild the Second Jewish Temple).

It is not only Trump’s I-don’t-put-a-damn-on-the-Palestinians and his disdain towards Muslims that many Israelis like. In contrast to the so, so smart and metrosexual Obama, the tough and unpolished Trump talks doogri— straight in-your-face and a not-politically-correct kind-of-guy. What is there not to love about him?

All of which explains why if Israel had been the 51st state, it would have been the ‘reddest’ state in the union — step aside West Virginia! — that Trump could carry in a landslide in 2020. In any case, Bibi, his Man in Jerusalem, who like his buddy in Washington is embroiled in a series of political scandals, is expected to win the next parliamentary election in Israel.

That the Israelis love Trump more than other Americans and that the Jewish State has become Trump Country, has been made clear after the release of the new Pew Research study of trends in global public opinion, which indicated that among the 25 countries included in the survey, Israel is in second place in its confidence in Trump’s ability to manage the world, closely behind the Philippines, led by Rodrigo Duterte who had actually made an official visit to Israel recently.

But then most of my Israeli friends that, as you probably suspected, are journalists, academics, and well-to-do lawyers, residing the political-cultural bubble of the secular and liberal Tel Aviv — caricatured as the ‘State of Tel Aviv’ by right wing critics — that Netanyahu did not carry in the last election, would probably feel quite at home spending the High Holidays at Temple Micah, applauding Rabbi Zemel’s sermons. They certainly do not feel being part of Trump Country, and subscribe to familiar western liberal causes, like feminism and gay rights, including the plight of thousands of illegal immigrants from Eritrea, residing now in Israel.

I mentioned Rabbi Zemel during a dinner I had in Tel Aviv with Alon Liel, the former Israeli Ambassador to Turkey, and a harsh critic of the Netanyahu government, and his wife Rachel, the former director of the New Israel Fund which promotes liberal causes, at the time when in Washington they were debating the nomination of Brett Kavanaugh to the Supreme Court.

Not surprisingly, the Liels found Kavanaugh’s accuser, Christine Blasey Ford to be ‘credible’ and expressed their frustration at being politically isolated in Israel, feeling sometimes as strangers in their own land and their hope is that liberal American Jews would have more influence on Israeli politics.

They probably won’t. In fact, while the demographic trends in the United States, especially the growing percentage of non-white and Millennial voters favours the Democrats in the long-run, among Israeli Jews the trend is in the other direction, with young voters moving the political right, raising the prospects for growing tension between Israel and America’s liberal elite and it large Jewish component.

Meanwhile the left-leaning Israeli Haaretz (where I publish occasionally) is decrying the rise of Trump Country and mocks those Israelis who hope that Trump would make Israel great again.

‘Outside the Israeli bubble, the world’s confidence in American leadership is collapsing,’ suggested a columnist for the newspaper recently, predicting that ‘Israel will pay for its too-tight embrace of Donald Trump.’ Maybe. But just now the Israelis seem to be having a great time with Trump.