Why are fake bombs sent to Democrats more shocking than real ricin packages to Republicans? 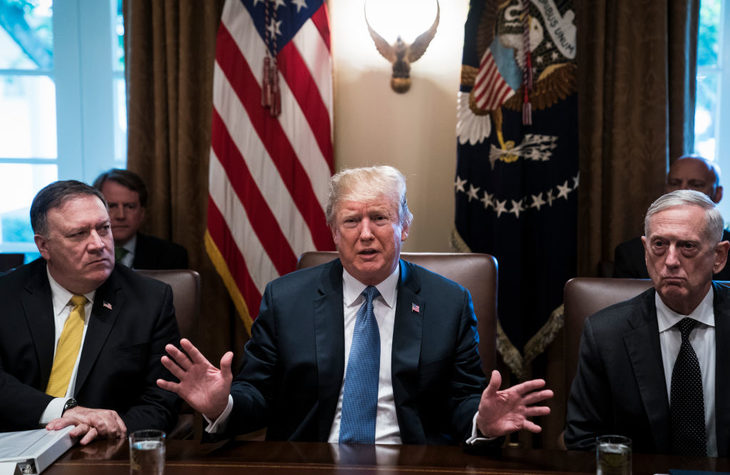 Why are fake bombs sent to Democrats more shocking than real ricin packages to Republicans?

Remember that time American media was consumed with news that the deadly poison ricin – contact with the skin can be deadly – was sent to President Trump, Republican Senator Ted Cruz, Defense Secretary James Mattis, and the Chief of Naval Operations, Admiral John Richardson? Remember all of the introspective opinion pieces wondering if attacks on the president had gone too far? Or if claiming that Republican policies kill people, might not be an incitement to violence?

Me either. But who can remember all the way back to October 2?

There are a few other differences between...

Remember that time American media was consumed with news that the deadly poison ricin – contact with the skin can be deadly – was sent to President Trump, Republican Senator Ted Cruz, Defense Secretary James Mattis, and the Chief of Naval Operations, Admiral John Richardson? Remember all of the introspective opinion pieces wondering if attacks on the president had gone too far? Or if claiming that Republican policies kill people, might not be an incitement to violence?

Me either. But who can remember all the way back to October 2?

There are a few other differences between then and now. The target then was the president, his Secretary of Defense, a senior naval officer, and a Republican Senator. And then, wasn’t there more than an implication that Republicans have it coming? After all, Democrats routinely claim that Republicans are not just cruel but that, as Nancy Pelosi said ‘millions, hundreds of thousands will die’ if Republicans get their way. What stronger language is there than that? And if you believe it, then violence against Republicans becomes a justifiable – perhaps even heroic — act of self-defense.

That was certainly the case when James Hodgkinson attempted the mass murder of Republican Congressmen and staffers playing softball last year sending Rep Steve Scalise and four others to the hospital. Hodgkinson was a volunteer for socialist Bernie Sanders who declared ‘It’s time to destroy Trump & Co.’ in one of many anti-Republicans social media posts. And CNN claimed in a laudatory profile that the violent left-wing paramilitary group Antifa ‘seeks peace through violence’ while its anchors Chris Cuomo and Don Lemon have both defended the group’s violent streak because, as Cuomo said, ‘fighting against hate matters.’ But such action is wrong not just for the obvious reasons, but because it is an attempt to appropriate more than one’s legitimate share of political influence. Every vote is supposed to count the same, but by physically imposing on an elected representative, agitators are trying increase their own power at the expense of their fellow citizens using fear rather than reason.

The other difference between this spate of packages and the attack on Trump, Cruz, Mattis, and Richardson it that the ricin attack was real and it was potentially deadly. The letters really contained ricin. Whereas, the packages sent to Democrat grandees including Hillary Clinton, Barack Obama, George Soros, Maxine Waters, and Joe Biden were apparently inert and were made just to look dangerous according to recent reporting.

The notes that accompanied the packages read like parodies of how committed progressives think Republicans speak. They are laughably hyperbolic attempts to mimic redneck sensibilities and hillbilly patois including, ‘Git r done’, a dated homage to the Blue Collar Comedy Tour’s Larry The Cable Guy character. The notes play to every Democrat stereotype of the American deplorables who support Donald Trump. In case you didn’t know, both the Left and establishment Right, known affectionately as Conservatism, Inc., are sure that everyone who voted for Trump is married to a sibling – or wants to be – chews tobacco, and handles snakes during Sunday worship services. And these notes play off those caricatures.

I’m inclined to issue the standard disclaimer abhorring violence in politics. I do. Nonetheless there is something absurd about it. Why must I engage in this ritual cleansing? I have never encouraged or condoned political violence. Nor has anyone I know. So to be forced to disclaim it brings a whiff of guilt, as though conservatives are known for supporting violence so I better let everyone know I’m not one of those conservatives.  It’s a slander and an insult up with which we should not put. After all, it was Eric Holder, not Jeff Sessions, who told the faithful, ‘when they go low we kick ‘em’ and it was Obama telling his adoring fans to find people who disagree with them and ‘get in their face.’ And let’s not forget the Justice Editor of the hard left group Think Progress who advocated harassing Republicans ‘where they eat, where they sleep, and where they work’ less than 30 days ago.

Yet, on the day the first packages were delivered CNN ran an on-air headline saying that there was a ‘manhunt for serial bomber going after Trump’s targets.’ Get it? Democrats have a history of rhetoric that glorifies and encourages political violence, of winking at it when it comes from groups like Antifa, and then of claiming the unknown sender of the suspicious packages was doing Trump’s bidding.

Perhaps the people whose sense of their own moral superiority allows them to think that harassment, intimidation, and physical assault are justified by the higher calling of their own side should take some responsibility. But I supposed they would claim that was blaming the victim.

On the other hand, a cynic might wonder if these packages didn’t earn their recipients a certain amount of social standing or street cred within the Progressive universe. And if so, one would be forced to wonder if, given that the packages weren’t, in fact, dangerous, if they didn’t engender a certain amount of jealousy from Democrats who didn’t make the cut. After all, some presidential contenders like Bernie Sanders were snubbed – but maybe the prankster didn’t know which of the socialist senators three homes he should send it to.