America’s mood is somewhere between despondency and revolt 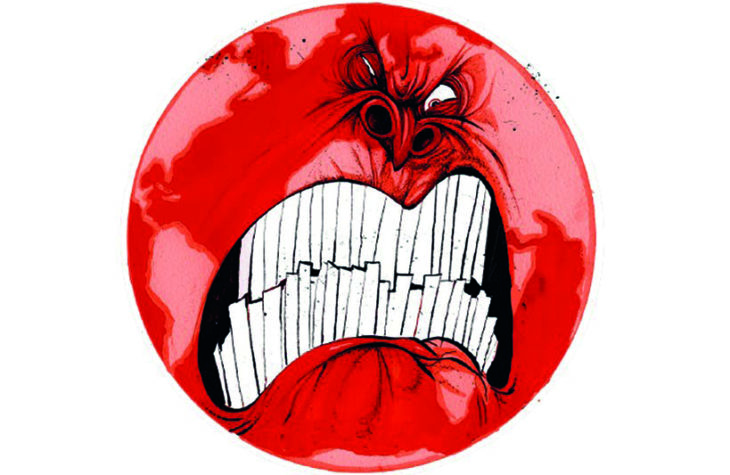 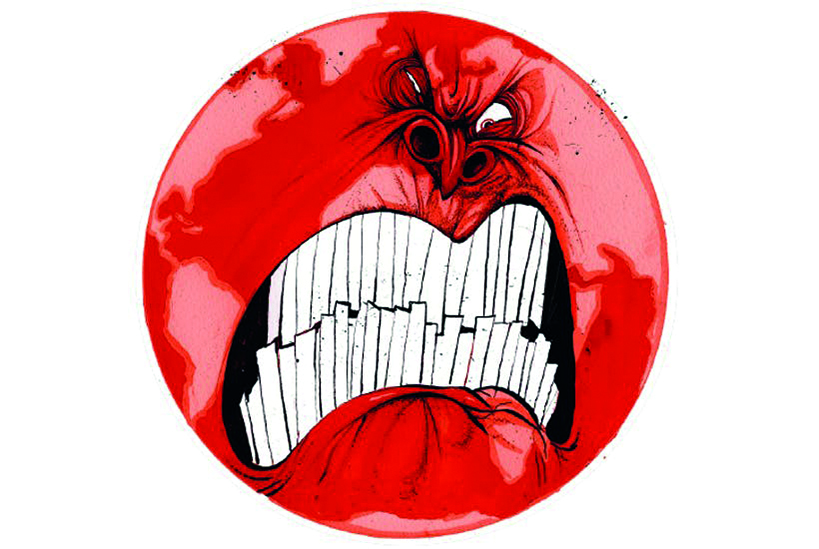 America is no longer just angry. We have become a nation of wrath. It is a risky emotional condition, recognizable by our desire to obliterate our opponents. Wrath doesn’t seek reconciliation. It wants revenge. Nor does wrath want to accommodate what it can’t control. It wants to rub the slate clean.

There is a wrathfulness of the political left, stemming from visceral hatred of Trump and his supporters. But as the left is ascendant in the seats of power, it can pursue its effort to extinguish its opposition via the instruments of state. The wrathfulness on...

America is no longer just angry. We have become a nation of wrath. It is a risky emotional condition, recognizable by our desire to obliterate our opponents. Wrath doesn’t seek reconciliation. It wants revenge. Nor does wrath want to accommodate what it can’t control. It wants to rub the slate clean.

There is a wrathfulness of the political left, stemming from visceral hatred of Trump and his supporters. But as the left is ascendant in the seats of power, it can pursue its effort to extinguish its opposition via the instruments of state. The wrathfulness on the political right is another story. Wrath reaches its zenith when people feel not just abused but hopeless in the pursuit of any redress. American wrath right now is the white-hot anger of the millions of people who have concluded the country is being destroyed and they have no legal redress.

I have been writing about anger in America for close to 20 years. That is a period that encompasses the ‘I hate George W. Bush’ manifestos; Revd Wright’s ‘God damn America’ sermons; Obama’s ‘They get bitter, they cling to guns or religion or antipathy to people who aren’t like them’; Hillary’s ‘basket of deplorables’ characterized by ‘racist, sexist, homophobic, xenophobic, Islamophobic’ views; Trump Derangement Syndrome; the 2020 George Floyd ‘peaceful protests’; and the QAnon Shaman at the January 6 Capitol riot.

All of these are instances of American rage, specifically from its political branch. But the quality of the anger differs from one instance to another. Anger against George W. Bush, first ignited by his disputed 2000 victory over Al Gore, was vehement but theatrical. Ben Cohen of Ben & Jerry’s Ice Cream, for example, mounted a national ‘Pants on Fire’ tour in 2004, exhibiting a 12-foot effigy of Bush with fake flames shooting out of his trousers.

The pussyhatted protesters at Trump’s inaugural in 2017 had some similar goal of deflating a man they saw as pompous and overbearing, but the tone of the protest shifted from exaggerated disrespect to something approaching bitter enmity.

Both are instances of what I call ‘new anger’, a self-congratulatory, look-at-me styling of the old emotion. New anger is a post-World War Two phenomenon that followed from the breakdown of an older ethic. For centuries American culture had upheld an ideal of self-control, in which easy resort to anger was stigmatized as a weakness and a personal fault. The arrival on these shores of Freudian analysis, emphasizing that repressed anger causes neurosis, and the simultaneous importation of the existentialist idea that unleashing anger is the path toward finding your authentic self, opened the door to this emotional rewiring of the American temperament.

The transformation took decades to move from sophisticated elites to common culture because emotional patterns are set in childhood, and relinquishing one set of parental expectations and replacing it with its exact opposite took several generations. But by the turn of the century, new anger was dominant and the older edicts of anger held in check were vanquished in mainstream America. In my 2006 book, A Bee in the Mouth, I warned that Americans would pay a significant price for this trade. Our personal lives would be impoverished and our political life would become chaotic. But my telescope was not powerful enough to see the details. Anger itself is almost as common as air. It is one of the ambient conditions of human social life. Politics and every other endeavor that involves people doing things together always entails toes stepped on, noses out of joint, and other metaphoric bits of anatomy pummeled. You can’t tell a story, let alone hold a dinner party, without drawing on currents of subterranean anger.

But its ubiquity doesn’t mean anger is everywhere the same. Anger can be bent into all sorts of shapes. From ‘new anger’, we have descended into wrath. The stairway of that descent has too many steps to recount here, but I can give a pretty telling example or two of what the descent looks like.

Feelings about the 9/11 attacks were still running high in May 2002 when country singer Toby Keith released ‘Courtesy of the Red, White, and Blue (The Angry American)’.

Keith’s song was seemingly ubiquitous and can rightly be considered the embodiment of popular sentiment of the time. It begins in a quiet, almost elegiac tone:

‘American girls and American guys
We’ll always stand up and salute
We’ll always recognize
When we see Old Glory flying
There’s a lot of men dead
So we can sleep in peace at night when we lay down our head.’

But the second verse pivots to a gravelly snarl as Keith recounts his father’s fierce patriotism:

If the sound and the lyrics of ‘The Angry American’ don’t instantly play in your head, you are either too young to remember that time or you spent it too immersed in reading Katha Pollitt ‘Put Out No Flags’ editorials in the Nation to register the emotional tenor of popular culture.

Keith’s song has some silly imagery about the Statue of Liberty ‘shakin’ her fist’, and mother freedom ‘ringin’ her bell’, but the details don’t matter as much as Keith’s overpowering conviction that America is righteously angry over the terrorist attack. The climax of the song comes after several lines in which he quiets his tone and reins in his vehemence (‘Justice will be served and the battle will rage’) only to unleash his full-on contempt, the point at which his audiences erupted into thunderous cheers: ‘Cause we’ll put a boot in your ass / It’s the American way.’ ‘The Angry American’ might be called vulgar, jingoist, or trite, but it is the epitome of assertive cultural confidence: a war anthem, rather than a lament.

Among President Trump’s last acts in office, on January 13 — the day Congress was busy impeaching him — was to bestow the National Medal of the Arts on Toby Keith. That might be the first national medal forged in the furnace of the new anger on the right. Keith’s song made it crystal-clear that he proudly endorsed our national anger, personally identified with it, and had not the least doubt we were strong enough to prevail.

After ‘Courtesy of the Red, White, and Blue (The Angry American)’ Keith had many successful country hits but with no other songs that, to borrow his phrase, lit up our world ‘like the Fourth of July’. Today, however, he has a new song, ‘Happy Birthday America’, that is as much of our current moment as ‘The Angry American’ was of the post 9/11 catharsis. ‘Happy Birthday America’ is another flag-themed declaration, but in a disheartened tone that veers towards cynicism:

‘Happy birthday America
It’s the Fourth of July
I get to wake up in your freedom
But sometimes I wonder why.’

‘Seems like everybody’s pissin’
On the red, white and blue
Happy birthday America
Whatever’s left of you.’

Keith recites America’s contributions in the two world wars and then turns to the disdain school children direct towards the country:

Ungrateful Europeans and derisive domestic activists lead a litany of laments Keith has for a country he now sees as ‘broken down’.

His voice in this song is querulous and complaining. The opening verses are set against a mournful organ. When Keith hinges at the second verse to a guitar-backed protest sound and breaks out into his characteristic vocal swagger, he is still somehow subdued.

‘Happy Birthday America’ isn’t really a protest song. It belongs to the less celebrated genre of resignation music. Think of the Band’s ‘The Night They Drove Old Dixie Down’, where resentment and hopelessness mingle with nostalgia.

Toby Keith isn’t the only country singer/songwriter voicing this new despair. Perhaps the outstanding example is Aaron Lewis, whose ‘Am I the Only One?’ weaves together many of the resentments that red-state Americans feel toward the prevailing culture.

Lewis performs this mournful song solo with his guitar, and in live performances gives a preamble in which he explains his bafflement at the nation’s demise (actually he says, ‘You have to be scratchin’ your head saying, “What the fuck is going on?”’) The opening lyric is actually four questions:

‘Am I the only one here tonight,
Shakin’ my head and think’ somethin’ ain’t right?
Is it just me? Am I losin’ my mind?
Am I standin’ on the edge of the end of time?’

The answers are plainly ‘no’. Aaron Lewis realizes his new song is something exceptional: ‘This is what I am supposed to do. God put me on Earth to do this shit right here.’

Toby Keith’s rage at those ‘pissin’ on the red, white and blue’ is undercut by his waking up demoralized and seeing America in the past tense. Aaron Lewis’s ‘thinkin’ somethin’ ain’t right’ sits beside his feeling of being isolated and alone, ‘watchin’ the threads of Old Glory come undone’. These songs capture that borderland between despondency and revolt. They are the opening, dissonant chords of the music of wrath.

The odd election of 2020 does not sit well with a great many Americans. They are not in the mood to engage in the equivalent theatrics of Ben Cohen’s mockery of Bush or the pussyhat feminists’ sneers against Trump.

President Biden is, in their view, a hollow figure not even worth mention. Their complaint lies far deeper as they see the purposeful destruction of American values by an elite that bullies and derides them.

What will come of this? How might revolt manifest itself? I hope it will be a successful recapture of key institutions, perhaps beginning with the schools. But the political elite that prefers to scorn the common people for wanting a say in their government is playing an awfully risky game. Despair breeds wrath and that fire, once ignited, will engulf us all.