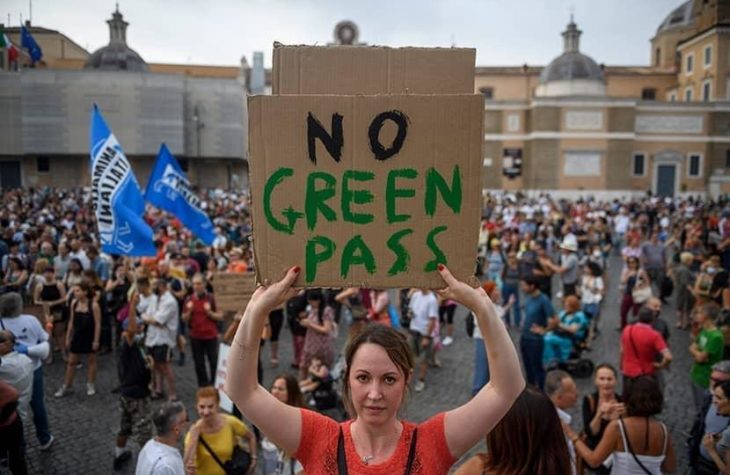 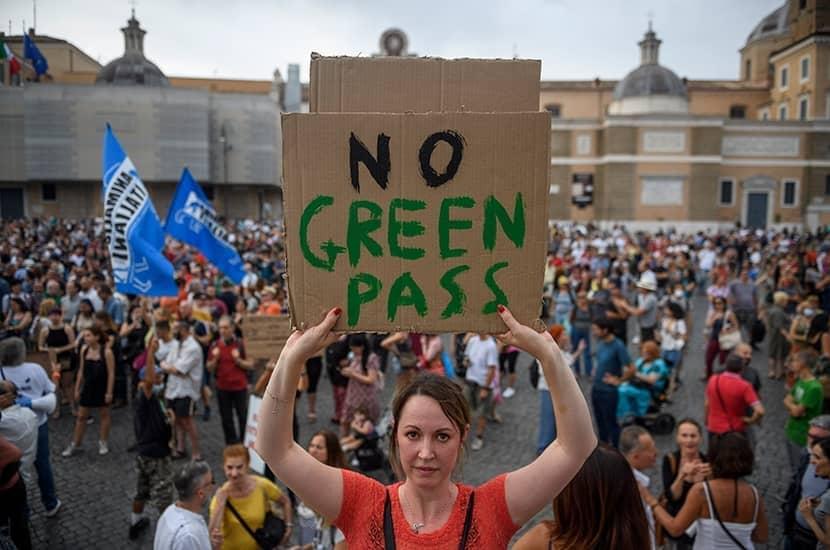 Rome
From this week, all workers in Italy must show a ‘green pass’ certificate in order to access any public place. A green pass shows that you’ve either been vaccinated, tested negative or recovered from COVID-19, and anyone without a pass could be suspended from work and fined.

But why is the Mario Draghi administration restricting basic public freedoms in this way when the Italian vaccination rate is one of the highest in the world? It is nothing short of mind-boggling. We have a higher vaccination rate than the UK, for instance, though restrictions have been all...

From this week, all workers in Italy must show a ‘green pass’ certificate in order to access any public place. A green pass shows that you’ve either been vaccinated, tested negative or recovered from COVID-19, and anyone without a pass could be suspended from work and fined.

But why is the Mario Draghi administration restricting basic public freedoms in this way when the Italian vaccination rate is one of the highest in the world? It is nothing short of mind-boggling. We have a higher vaccination rate than the UK, for instance, though restrictions have been all but lifted there. Yes, COVID is dangerous, but this unjustified loss of freedom is dangerous too because Italians are angry and increasingly taking to the streets. There have already been large protests — I’ve attended a few — and more are planned, though for some reason most of the media downplays them.

Take the protest a few weeks ago in the Piazza San Giovanni in Laterano, the square traditionally used for trade union rallies. I was there and I can tell you that the crowd came from every sector of society and the demonstration was extremely large even though it was not organized by a trade union or political party. I estimated that there were at least 80,000 protesters, but Italy’s main newspaper, La Repubblica, reported that the police claimed there were only 3,000. Perhaps for fear of seeming to side with anti-vaxxers, the Italian papers are portraying protesters as a sort of unreasonable lunatic fringe, although in my experience they are peaceful and well-informed.

That day in Piazza San Giovanni, a determined young woman appeared on the stage. She was a police officer, but said she had come to speak as a private citizen. ‘When I became a police officer I swore to defend the constitution. I cannot keep silent when the constitution is battered into pieces. These green pass measures are discriminating against my fellow Italians.’ Her speech electrified the crowd, who interrupted her repeatedly with bursts of applause. Nunzia Alessandra Schilirò became, at that moment, the leader the protesters needed.

But just 18 hours after her speech, the minister of the interior, Luciana Lamorgese, issued a statement saying that she was consulting with the head of the Italian police on how to punish what she referred to as a serious act of insubordination. This had the predictable effect of boosting Schilirò’s popularity even more, and she is now the acknowledged face of the green pass protests, much to the rage of our government.

I spoke to Schilirò a few days ago and I asked whether she was surprised at the reaction of the government to her speech. ‘I knew that I would have put my career at risk but couldn’t imagine that they would ever threaten to pursue me with article 415 of the criminal code for inciting civil disobedience,’ she said. ‘But still I have no regrets… It was the right thing to do… I am receiving hundreds of messages of support from individual members of the police force and from the army too.’

Schilirò’s star is only going to rise. She has been nominated as the head of the police union Cosap and will shortly take part in another rally. ‘There is a pre-coup atmosphere now,’ says Ugo Mattei, a professor of civil law and one of the main initiators of a campaign to revoke the green pass measures. ‘There are signs of fibrillation in society, among the police and the armed forces. The constitution is stretched beyond its limits.’

During a hearing at the Senate on October 7, the philosopher Giorgio Agamben repeatedly begged members to think carefully before voting in the new decree. ‘It is a political and not a health measure,’ he warned. ‘Most say that the green pass is just a gentle way to induce people to get vaccinated. Instead I would say the contrary. The vaccine is an excuse to oblige the citizens to have this green pass with a QR code and to establish an ever more pervasive system of social control typical of totalitarian regimes.’

It’s not that Italians don’t understand COVID’s severity, but they struggle to understand why Italy has to be this draconian when other European countries are giving up restrictions. They look at Denmark and Norway or at Croatia across the Adriatic, where the president decided to lift restrictions after just 50 percent of the population were vaccinated. In neighboring Slovenia the constitutional court has banned a similar law to Italy’s.

Last weekend, more demonstrations took place all over Italy. In Piazza del Popolo in central Rome, at least 60,000 people were present and some managed to make it all the way to Palazzo Chigi, seat of the government, chanting slogans just under the balcony of Draghi’s office. The police were caught off guard and had to resort to violence in order to chase the crowd away and reestablish order in the center of the capital. I saw some demonstrators bleeding.

A fringe of more violent protesters took advantage of the situation and stormed the office of the CGIL, the main Italian trade union organization. The next day most of the media simply reported on this marginal episode involving a few hundred extreme-right hooligans and completely ignored the concerns of the thousands of other protesters.

In the meantime, workers at the harbor of Trieste are threatening to down tools so as to close and disrupt supplies. Students and university professors are mobilizing on campuses, organizing lessons outside for those without a green pass who can’t get indoors. Several industry associations fear chaos in the supply chains and factories.

One major problem is that pharmacies and hospitals will not be able to cope with the forecasted huge spike in test demands. And despite the threat of the new law, the hard core of about 20 percent of the population who are still unvaccinated will probably remain so. As a Trieste harbor worker said: ‘It is humiliating. We are not livestock. We are not going to bend to this sort of blackmail.’

Fearing chaos on the streets, Unarma, the main syndicate of the Carabinieri, has sent an appeal to the minister of defense to suspend the new decree. Nearly 20 percent of the police force are unvaccinated and even vaccinated officers feel their colleagues should have the choice. Tensions are rising.

Nunzia Alessandra Schilirò is becoming ever more popular and, given the mood among the police and the army, it feels unwise for Draghi to double down and refuse to listen to the protesters.