How should the West respond to Putin’s threats? 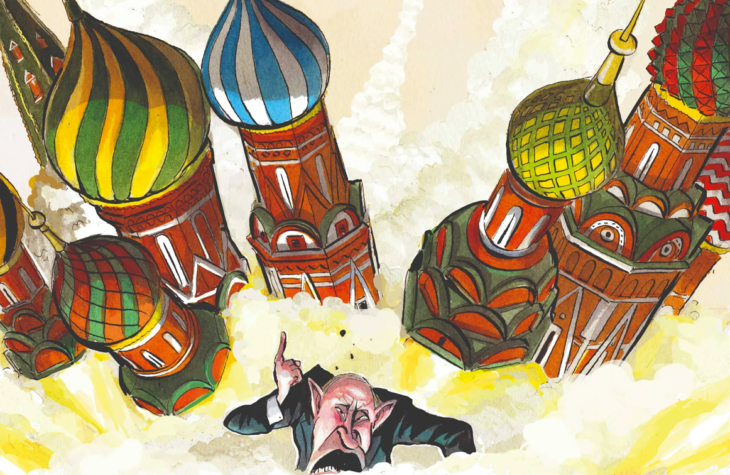 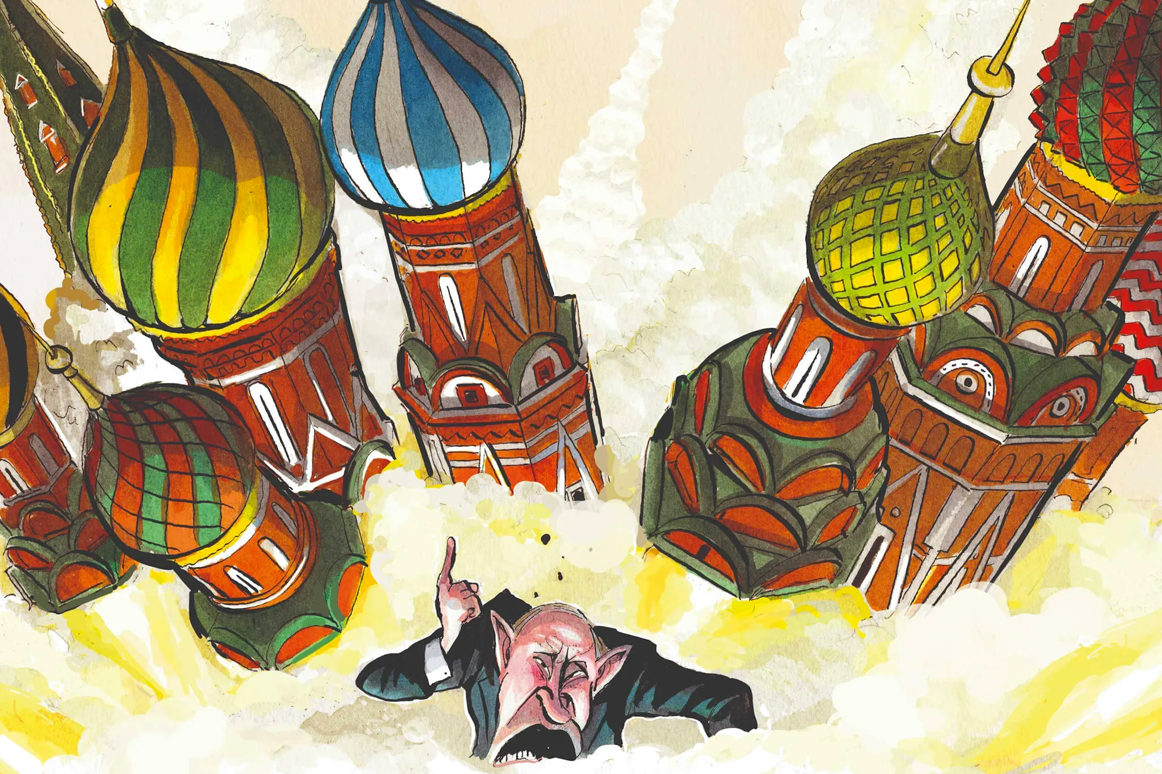 How should the West respond to Putin’s threats?

Vladimir Putin clearly wants us to worry that he is crazy enough to use a tactical nuclear weapon in Ukraine. This fear was intensified this week when images surfaced that some — possibly in error — believed showed a train operated by the secretive nuclear security forces moving towards Ukraine. Despite this, many believe the likelihood of a nuclear attack remains extremely low. Yet it is a plausible enough threat for the West to be considering how it should respond if Putin were to unleash one.

Russia has an estimated 1,900 non-strategic nuclear weapons, or NSNWs,...

Vladimir Putin clearly wants us to worry that he is crazy enough to use a tactical nuclear weapon in Ukraine. This fear was intensified this week when images surfaced that some — possibly in error — believed showed a train operated by the secretive nuclear security forces moving towards Ukraine. Despite this, many believe the likelihood of a nuclear attack remains extremely low. Yet it is a plausible enough threat for the West to be considering how it should respond if Putin were to unleash one.

Russia has an estimated 1,900 non-strategic nuclear weapons, or NSNWs, from artillery shells to warheads for missiles; their yields range from a mere 0.5 to 100 kilotons, more than twice the power of the bomb that devastated Nagasaki. However, Russia has not tried firing one in an exercise since 1990 — and we do not even know how many are still usable, even after an inevitable overhaul.

Putin has a range of options short of directly striking Ukraine, from overtly beginning to ready a warhead for use through to a performative “test” on Russian soil or in Russian waters. However, if NSNWs are used, their purpose would not be so much to dominate the battlefield — Kyiv is unlikely to pack its forces conveniently tightly together to make this worthwhile — as to shatter Ukraine’s military or civil infrastructure and above all to try to terrorize them. The hope would be that Kyiv would back away or surrender, or that a horrified West would force it to come to the negotiating table.

It is unlikely that either scenario would happen, but the fear that Putin might believe this would work is what keeps strategic planners awake at night. The kind of measures which would either be demonstrated to try to deter this kind of scenario or else deployed in response fall into four main categories.

First would come military retaliation. While Ukraine is not a NATO member and thus there is no formal commitment to its defense, there is a strong view in most western capitals that such a move cannot go unpunished. Russia would have to suffer what national security advisor Jake Sullivan recently called “catastrophic consequences.”

There is no sense that NATO would want — or need — to respond in kind. Instead, it would use its clear superiority in airpower and long-range, precision-guided missiles to deliver a massive blow to Russian military capacities and potentially also symbolic political targets. The former CIA director General David Petraeus has talked, for example, of a combined “effort that would take out every Russian conventional force that we can see and identify on the battlefield in Ukraine and also in Crimea and every ship in the Black Sea.”

Other potential targets could include any Russian ships in the Baltic Sea, as well as installations in the heavily militarized exclave of Kaliningrad, sandwiched between Lithuania and Poland. The aim would likely be to degrade as much military capacity as possible with the least bloodshed, while avoiding giving the impression that the West plans to go further and pose an existential threat to Russia. This, after all, might pitch Moscow and NATO into a vicious escalatory cycle. According to a German defense source, early warning radars such as those at Lekhtusi near St. Petersburg and Dunayevka in Kaliningrad would not be hit, lest the Kremlin think this was a prelude to a nuclear missile attack.

The West also has a range of “non-kinetic” means of punishing Russia for any such escalation. Economic sanctions would clearly be further increased, but these are long-term measures. Much more immediate could be cyberattacks on critical national infrastructure, such as the systems controlling Russian domestic flights and, above all, the railways. More than 90 percent of all freight hauled inside the country travels by rail, including most of the food supply. Any disruption to these systems, however temporary, would demonstrate this vulnerability not just to Putin but to the whole country.

Beyond that, while it is easy to disdain political responses when dealing with an autocrat like Putin, these also have a role in our arsenal. In part our problem has been that, however much western politicians often talk as if the whole world is ranked against Putin, in practice he has not lacked allies, or at least neutral bystanders. This is especially the case in the global South, where the West has failed to make much headway in persuading many countries that this is anything more than a European problem.

Were Putin to use nuclear weapons, that would change. At September’s summit of the Shanghai Cooperation Organization in Samarkand, both India’s Narendra Modi and China’s Xi Jinping left him in no doubt as to their concerns about the war and its wider impact. According to British diplomatic sources, Beijing has been warning Moscow against breaking the nuclear taboo. After all, it has its own interests at stake: if, someday, it opts to try to take Taiwan by force, its massed invasion fleets would themselves be tempting targets, were America’s NSNWs in play. More directly, the Indian foreign minister, Subrahmanyam Jaishankar, explicitly said that the ‘nuclear issue’ was “of particular anxiety.”

The scope for the comprehensive diplomatic isolation of Russia would be greater than ever, especially given that countries such as Turkey, which hitherto have tried to play both sides, would be forced off the fence. While this may sound of no more than symbolic value, were Russia denied the opportunity to trade as before with China and India, or launder money through the banks of the UAE, or send sanctions-busting freighters through the Bosporus, this would have a very practical impact on the country.

Finally, the use of NSNWs would fundamentally change the tone and thrust of western policy. Judging from conversations with officials in both London and Washington, the current mantra that “Putin must fail” would be replaced by “Putin must go.”

There has been an understandable reluctance outside some of the more hawkish European circles to broach the issue of regime change, not least because the West’s track record is rather stronger in bringing dictators down than managing to control what happens afterwards. A nuclear Russia in the hands of an angry warlord or ripped apart by civil war is arguably an even more terrifying prospect than the present standoff.

Nonetheless, there would be an inevitable and justified fear that having broken one taboo, Putin could not be trusted to break others. Attempted assassination might be off the table — Putin’s personal security is formidable, and he might be tempted to return the favor — but that still leaves a lengthy menu of options, from encouraging palace coups to efforts to stir up dissent in non-Russian regions.

Better by far, of course, to deter beforehand than to punish afterwards. A legitimate question is how far all these options are being spelled out to Putin and his people and, above all, how the will actually to use them is being demonstrated. Joe Biden may fulminate at the United Nations and western officials deliver stern warnings on TV, but Putin may still believe — despite the unexpected unity and scale of the western response to the invasion — that we would not follow through. Indeed, his only real hope of being able to salvage something from his ill-considered Ukrainian adventure is that, if we falter, he might believe we cannot match his determination.

It may be the case, then, that the time has come for the West to abandon its traditional policy of “strategic ambiguity,” not making explicit how it would respond to a nuclear strike. Biden, for example, when asked what the consequences would be, replied: “You think I would tell you if I knew exactly what it would be? Of course, I’m not going to tell you. It’ll be consequential… and depending on the extent of what they do will determine what response would occur.”

Although the aim is not to limit western options or give Russia the chance to game out the exact costs, this approach failed in February. The United States and the UK, in particular, were very clear in their belief that Russia planned to invade Ukraine and that they would respond in unprecedented ways. However, to Putin these were empty words; King Lear roaring impotently: “I will have such revenges on you both… What they are, yet I know not, but they shall be the terrors of the earth!”

Given the range and depth of the West’s potential options, it is time to present Putin — and the Russian elite as a whole — with a clear and painful statement of precisely what they would face if Moscow took the nuclear option. Even if, as is likely, no NATO consensus can be reached on this, nothing stops Washington and a “coalition of the worried” from doing so on their own account.

Putin is probably bluffing, hoping the very thought of the mushroom cloud is enough to make us falter in our support for Ukraine. Just in case this is something more, though, it is time to spell out what a catastrophe he faces if he goes beyond explosive rhetoric.