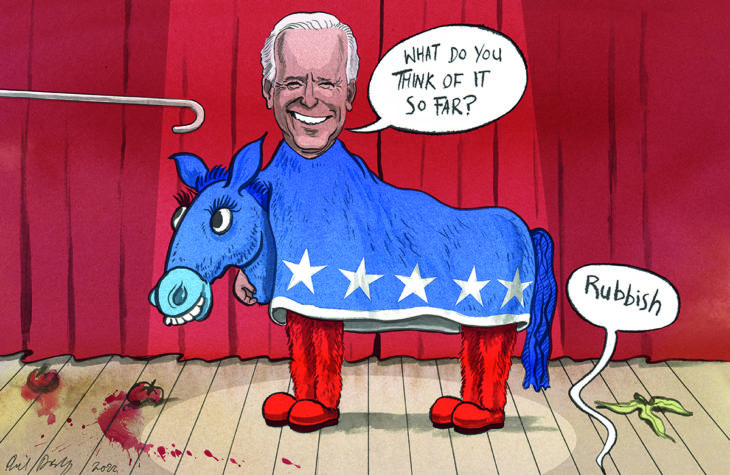 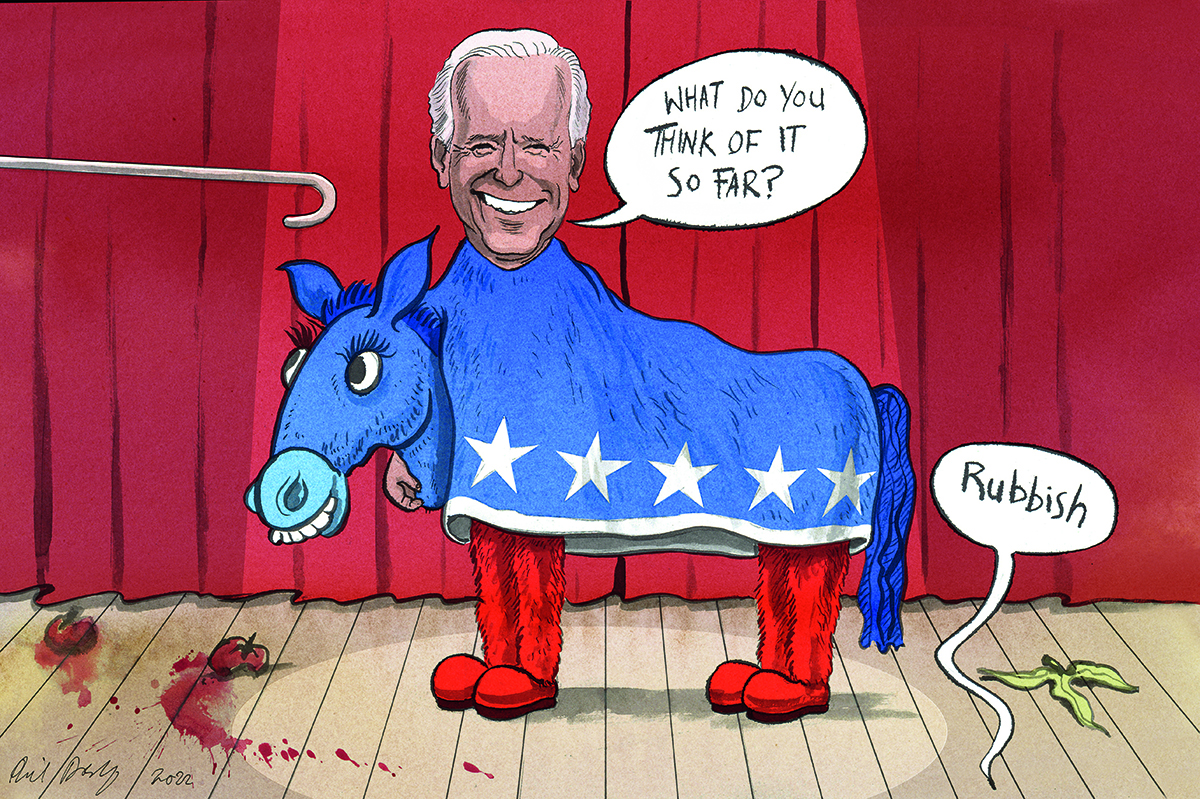 By the middle of January, I’d read some version of the headline “Biden Can Still Rescue His Presidency” so many times that it seemed an algorithm had taken over from the editors.

The New York Times placed it above a column by Bret Stephens, a prominent anti-Trump conservative and a member of the pundit pack that earnestly wished the president Godspeed when he entered the White House more than a year ago. Stephens, like most of his colleagues, argued that Biden was “flailing — and failing” — because of what the paper’s news pages have described...

By the middle of January, I’d read some version of the headline “Biden Can Still Rescue His Presidency” so many times that it seemed an algorithm had taken over from the editors.

The New York Times placed it above a column by Bret Stephens, a prominent anti-Trump conservative and a member of the pundit pack that earnestly wished the president Godspeed when he entered the White House more than a year ago. Stephens, like most of his colleagues, argued that Biden was “flailing — and failing” — because of what the paper’s news pages have described as a “legislative agenda in shambles.”

While Stephens in part blamed “political incompetence” for the failure, he implicitly agreed with the assertion by Boston Globe columnist Jeff Jacoby that Biden’s difficulties were due to a dreadful alliance with reckless left-wingers in his party. Instead of unifying the country by dealing with the immediate crises of Covid-19, violent crime and inflation, the president, in Jacoby’s analysis, “had yielded to the temptation to push the sweeping, expensive, transformational agenda championed by his party’s left-wing base.” According to Jacoby, “the further leftward he moved, the more intolerant [Biden’s] rhetoric became,” culminating in “language… so unhinged and intemperate [about voting rights] that even Senator Dick Durbin… deplored it.” 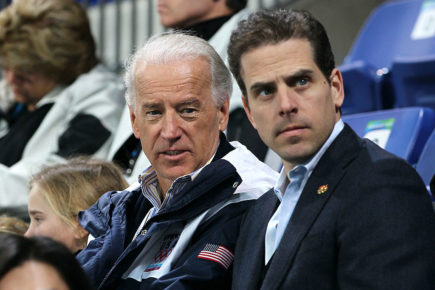 Good heavens, the formerly pro-Biden Jacoby was disappointed. A veritable Robespierre, that Joe. Or maybe even a “progressive” version of Trump.

Allow me to present an alternative view: far from being a failure, Joe Biden has been immensely successful – that is, at the tasks that were assigned to him when he halted the surge by Bernie Sanders during the 2020 primary, before Covid shut down the country.

The president is a man of limited abilities, especially when it comes to stringing together coherent sentences. But he is nothing if not spectacularly persistent in the one cause that has animated his entire career: maintaining in the Democratic Party a rigid hierarchy with control emanating from the top, never from the hoi polloi and never from rebellious reformers like Sanders or Alexandria Ocasio-Cortez.

In Biden’s catechism, rewards and punishment must result from loyalty, irrespective of electoral success. A man of little principle – and no ideology – Biden is the most regular of regular Democrats, a hack politician whose positions on the important issues of the day may gravitate toward the center, but never deviate from his party’s leadership or the Washington “consensus.”

Faithful friend to the credit card industry based in Delaware, Biden has consistently supported the interests of capital over those of the debtor class. But this has been out of political self-interest, not conviction, or even hometown pride. As a US senator, Biden voted the party line and steadfastly supported President Bill Clinton’s move to the right, embracing the increased incarceration of young black men and work requirements for welfare recipients. On Clinton’s signature policy initiatives — the “free trade” accords of NAFTA and permanent normal trade relations with China — the allegedly humble, regular guy from Scranton, Pennsylvania, prioritized loyalty over the fact that these policies threw millions of regular Joes out of work and largely destroyed the American labor movement. Again, these votes stemmed from fealty to the party leadership, not firm beliefs.

As for voting rights, Biden never broke a sweat for blacks in any sphere, despite his phony claim of having being arrested as a teenager at a civil rights demonstration. The idle chatter from early 2021 that Biden wanted to enlarge on Franklin Roosevelt’s New Deal was preposterous — his votes in 1999 to repeal the Glass-Steagall Act and in 1983 to tax Social Security benefits as income were repudiations of the founder of the American welfare state.

And yet Biden’s disillusioned critics insist that he’s become either a raving lunatic or a hostage to the left. Also that he’s been foiled in his “progressive” push by the intraparty opposition of Senators Joe Manchin and Kyrsten Sinema. This is absurd. All the evidence suggests that Biden was in on the foiling from the beginning — that he cleverly lured Sanders, the incoming chairman of the Senate budget committee, into believing he would forcefully support what was, in fact, the Sanders Build Back Better bill. Sanders campaigned hard for Biden because of what he claimed was Trump’s overwhelming threat to democracy, so perhaps he thought the president was indebted to him.

It’s sad to think that he could have been so naive. Biden was rescued from imminent collapse by Representative James Clyburn, boss of the South Carolina Democrats, precisely to restore order to the party and place a reliable party man at the head of the ticket, thereby breaking the Sanders insurgency. Until he won the South Carolina primary on February 29 (his first primary victory in three presidential campaigns), Biden looked like a sure loser and Sanders the clear front-runner.

Once in power, the new president got busy doing what he does best – not promoting leftist visions of social and economic justice but dispensing patronage. Quickly jettisoned from the Covid relief bill was the Biden campaign pledge pushed by Sanders, to raise, in stages, the minimum wage to $15 an hour, allegedly because the Senate parliamentarian said it violated Senate rules to include it in a reconciliation bill. No protest from Biden over this technicality, but silent approval from Manchin and Sinema (who thought $15 was too much) and vocal praise from Republicans. Once the relief bill passed, with tiny majorities in the House and Senate powered by unanimous Democrats, whom did Biden reward? Certainly not Sanders. On March 26, Biden nominated Manchin’s wife, Gayle, as co-chair of the Appalachian Regional Commission, a federal agency and a perfect conduit to West Virginia, among thirteen states, through which to funnel pork barrel money from the proposed infrastructure bill.

Sanders apparently got the hint — his 2016 and 2020 assaults on the party leadership would not be forgiven. The progressives dug their heels in, demanding a guarantee that the Senate (with Manchin’s and Sinema’s essential support) would pass the social-spending bill before the progressives would allow passage of the infrastructure bill in the House. With a fifty-fifty split in the Senate and a slight Democratic majority in the House, Sanders thought he had the whip hand. But Manchin had the tacit support of the president and Senate majority leader Chuck Schumer, who in July signed a secret “contract” with the West Virginia senator, granting him a decisive role in determining the size and scope of BBB.

As the stalemate dragged into the fall, pundit nonsense proliferated. Writing in the Wall Street Journal, former Republican speechwriter Peggy Noonan complained, “Democratic leaders are letting progressives push them around.” Unlike Lyndon Johnson, “who knew how to kill,” Biden was an elderly milquetoast. “Progressives, who trend young, are pushing around moderates, who tend to be older.” Noonan was wrong; under pressure from the Congressional Black Caucus (orchestrated by two eighty-one-year-olds, Speaker Nancy Pelosi and James Clyburn), the House progressives caved and relinquished their leverage. The infrastructure bill passed and BBB languishes still, with Manchin offering crumbs of compromise and Sanders steaming mad, threatening primary challenges to Sinema and Manchin.

Meanwhile, the party regulars get paid. Gayle Manchin will help ARC distribute $1 billion from the infrastructure bill to needy contractors, bureaucrats and “entrepreneurs.” James Clyburn gets a black woman from the South, Ketanji Brown Jackson, nominated to the US Supreme Court. And Joe Biden, faithful servant to Clinton and Barack Obama, enjoys the ultimate political patronage — to be president for the next three years while the unchallenged boss of his party. What’s more, in spite of the many announcements of Biden’s and his party’s demise, the Democrats, as of February 1, had outraised the Republicans (themselves split over Trump) for the midterm elections by $65.8 million to $50.6 million in the critical finance/insurance/real estate category.

Punditry predicts a Republican takeover of the House, of course. But for a career politician like Biden, crushing the left-wing opposition within his party means more than the opinions of any columnist. He probably thinks he can keep stoking anti-Trump and anti-Putin hysteria to keep the progressives cooperative, more or less, until the election. The President is neither a milquetoast nor a gentleman. On February 7, Biden made his wife, a community college English professor, thrust another dagger in the back of the progressives. In a speech to community college administrators, Dr. Jill Biden announced that whatever, if anything, emerged from the rubble of Build Back Better, it would not contain money to fund free tuition for their schools. The First Lady described herself as “disappointed.” The day before, Joe Manchin had already delivered the coup de grace on national television: “The Build Back Better as it has been presented over, what, the last seven, eight, nine months, that bill no longer will exist.”