Impeachment: the verdict of history 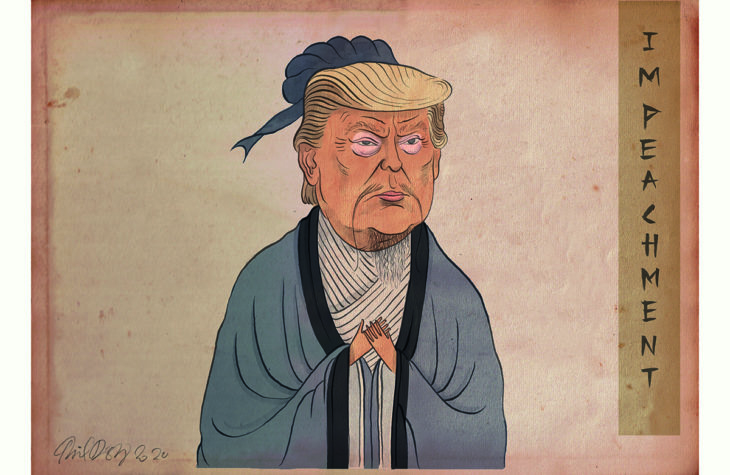 Impeachment: the verdict of history

This article is in The Spectator’s March 2020 US edition. Subscribe here.Spring term, 2170. Professor Hankins assigns an English translation from the 22nd century’s most authoritative historical survey, The Beijing Universal History. This week’s course reading is from Volume VIII: The Far Western Hemisphere — North Central American Province.
Chapter 33 The Era of Impeachment, 2020-52
At this time the North Central American province was still independent and under the system of governance known as ‘liberal democracy’, described in Chapter 29. Liberal democracy was drawn from the same corrupt well of late-western philosophy as the Marxism that had colonized...

This article is in The Spectator’s March 2020 US edition. Subscribe here.Spring term, 2170. Professor Hankins assigns an English translation from the 22nd century’s most authoritative historical survey,

At this time the North Central American province was still independent and under the system of governance known as ‘liberal democracy’, described in Chapter 29. Liberal democracy was drawn from the same corrupt well of late-western philosophy as the Marxism that had colonized Chinese political institutions in the century before the Great Restoration and obscured the Kingly Way of Benevolent Governance. Both systems are now deservedly condemned by the House of Scholars.

Marxism was rapidly abandoned in the Middle Kingdom after the New Mandarins restored monarchy and Confucian principles of governance. But in peripheral regions such as North Central America, liberal democracy went through a long process of fossilization. In retrospect, it is evident that American governing elites had lost the Mandate of Heaven soon after the beginning of the Warring Factions period. Nevertheless, as late as the regional elections of 2016, most people continued to believe that the dynasty of corrupt mandarins (‘mixed economy’ in English) would remain effectively in control of government.

During this period the rites of democratic government continued to be enacted publicly, but real power passed to a class of eunuchs, informers and professional spies in the old capital city of Washington. They are referred to in sources of the time as ‘the administrative state’ or ‘the deep state’. Despite the increasingly tyrannous rule of these corrupt mandarins the people did not rise up in revolt, for vast numbers had been indoctrinated in mandarin academies, or fed entertainment laced with subtle propaganda by mandarin sympathizers. This was produced by an influential society of mimes, magicians and entertainers known as Hao Lai Wu, from the hillside where they lived, in the modern province of Jialifuniya (‘Greater Mexico’ in English). By edict of the sage-emperor Ren (On Public Morality, 2058), Hao Lai Wu was suppressed. Its villages, including the famed Canyon of the Laurels, were burned to the ground and its hills converted to moonbeam-generator farms.

The Shanghai scholar Sima Guang was the first to label these final decades of liberal democracy the ‘Era of Impeachment’ (Sima, 2096). Impeachment was a ritual of the House of the People (‘Representative House’ in English), performed each year at the end of the legislative calendar. While in earlier periods this House had debated and passed legislation intended to benefit the people, by this period it consumed most of its energies investigating members of minority factions. By 2020 the majority of these inquisitions (‘witch hunts’ in English) were directed against the chief demagogue (‘president’ in English) of the enemy faction.

Though the post-2020 impeachments had no practical effect and were always ritually dismissed by the Senate, the colorful ceremonial that grew up around them has fascinated generations of historians and anthropologists. By North Central America’s final decades of independence, its citizens had ceased to study or record their own history in the mandarin academies. Thus these impeachment rituals, of which many videos survive, along with commentary by government newsreaders, are among our best sources for discerning political mores in the period of American decline.

The ceremonial elaboration of impeachment grew in proportion to its futility. The House chamber was hung with plastic American flags, copies of the Fundamental Laws and large banners declaring ‘Impeached!’ Soft patriotic music and the score from a film called The American President played in the background. The biggest Talker in the House of the People (‘Speaker’ in English) began the rite with a formal proclamation that the demagogue of the enemy faction was ‘impeached forever’. There followed a series of cryptic prayers to the gods of Progress, calling upon them to preserve the people’s sacred rights to infanticide, correct speech and a nation free from fireworks. The solemn execrations (‘articles’ in English) were then read out and signed by the Talker with a special silver-tipped pen in the shape of a bullet. Replicas of the pen were distributed on gold-plated trays to each of the Manipulators (‘Managers’ in English) and to the chief financial supporters of the majority faction who, being ritually impure, waited outside in the hallways (‘lobbies’ in English).

Next, the doors of the chamber were thrown open and the Manipulators, dressed in black robes with gold and blue tassels, processed in double file to deliver the solemn execrations to the Senate. The ceremonial walk eventually occupied many hours and was embellished with performances of interpretative dance, the slow beating of large drums and the keening and whooping of paid mourners. Videos of the ceremonies would then be played over and over again on government news services with a solemn commentary delivered by aspiring or former mandarins.

It is generally accepted that the annual impeachment ceremony was intended as ritual humiliation of the demagogue who led the faction in power. Historian Xue Juzheng challenged this characterization, noting that the central figures in the ritual, the Manipulators, were persons of low character and ridiculous or loathsome appearance (Xue, 2142). Reasoning from Confucian principles that only honorable people can confer honor or take it away, he hypothesized that the choice of Manipulators must have been intended to present the demagogue with a mirror image of the depravity of which he stood accused — an image so repulsive as to dissuade him from similar conduct. Juzheng’s anachronistic interpretation, however, was refuted by historian Duyang Xiu, who demonstrated that North Central Americans of the late independence period had no understanding of honor at all and were simply unaware of their own moral turpitude and folly (Duyang, 2156). According to Xiu, as the House of the People became more irrelevant to actual governance, it elaborated magnificent new ceremonies and rites to compensate for the general contempt in which it was held. This theory gains further credence from parallel developments in the early imperial period of the Romans (see Volume III: Ancient Near Western History—The Reign of Nero).

The annual impeachment rites lasted until 2052, when they were suppressed by order of the hegemon Jeffrey III, Lord Bezos. Lord Bezos put an end to the competition for political power among rival hegemons (‘billionaires’ in English) when he acquired a majority stake in all 30 components of the Dow Jones Industrial Average, the predecessor of the Beijing Universal Economic Rating. The nation burst into spontaneous rejoicing at the restoration of peace and on-time fulfillment.

In the following year, Lord Bezos guided North Central America into the safe port of monarchy when, to universal jubilation, he transferred full ownership of North Central America to Emperor Lao the Great of the Middle Kingdom. In recompense for his loyal service (‘quid pro quo’ in English), Emperor Lao confirmed Lord Bezos as the first Prince of Central North America, consented to the merger of AmazonUniverse with Alibaba Eurasia, and appointed him exclusive supplier of Confucian classics to state schools as well as all prayer books and chanting manuals used in the state religion of Yesu-Buddha.