We need a dose of vaccine realism 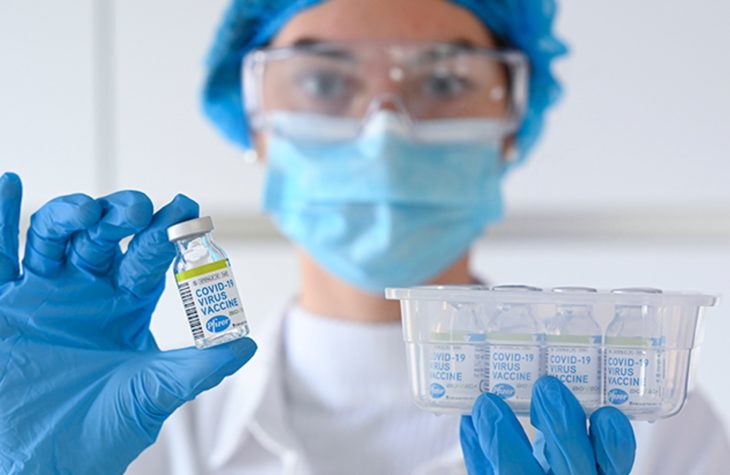 We need a dose of vaccine realism

One of my geniuses as both a commentator and a character is to confront what for most normal people amounts to unqualified good news and immediately spot the downside. I’m a professional party-pooper.Hence, as promising early results from three major COVID vaccine trials inspire a flurry of jubilant metaphors about tunnels and cavalry, your downer columnist glowers — for the New York Times didn’t tag Shriver ‘the Cassandra of American letters’ for nothing. Beware, warns this killjoy crank, allowing your minders to keep you in confinement ‘just a little bit longer’ and then you’ll be...

One of my geniuses as both a commentator and a character is to confront what for most normal people amounts to unqualified good news and immediately spot the downside. I’m a professional party-pooper.

Hence, as promising early results from three major COVID vaccine trials inspire a flurry of jubilant metaphors about tunnels and cavalry, your downer columnist glowers — for the New York Times didn’t tag Shriver ‘the Cassandra of American letters’ for nothing. Beware, warns this killjoy crank, allowing your minders to keep you in confinement ‘just a little bit longer’ and then you’ll be let out to play. Like the classic carrot dangling before a donkey’s nose, an indeterminate short time is still out of reach, and in this sense doesn’t effectively vary from a long time from now.

With an end to this farce ostensibly in sight, effective vaccines might seem to redeem lockdowns and their euphemistic ‘tier’ equivalents. See? We needn’t learn to ‘live with’ COVID-19. We’ll all get poked in the arm, and then the boogievirus will go away. Until then, keep the faith, baby. All these overbearing restrictions on your liberty, the gory wounding of the economy, the obscene overspending by the Treasury, and the horrific knock-on effects for other grave health conditions? Lo, such minor inconveniences are temporary, so put a sock in it.

Well, everything is temporary, is it not? Life is temporary. Which is why what’s now guaranteed to be a full year of our lives being blighted by misguided governmental arm-twisting constitutes no small loss. On average, we’ve only 81 of these annual sovereigns to spend, and many of us have already drained our mortality accounts to spare change. So for God’s sake let’s not extend that blight to two years.

Every fall, the NHS impressively administers 15 million flu vaccines over three months. But all these COVID vaccines require two carefully timed doses. To achieve its extraordinary target of universal adult vaccination by April, the NHS would have to improve on its flu-jab delivery rate several times over. Should the service merely manage to double its flu-jab rate, we’ll be at the mercy of government ‘measures’ until next winter.

Let’s keep hoping for Oxford’s vaccine, because Pfizer’s super-cold storage is bound to slow its rollout. Scaling up doesn’t always improve efficiency; massive operations can strain logistical capacity and implode into fiascos. A sufficient supply of constituent chemicals remains uncertain, and international competition for both compounds and finished products will be fierce.

The UK government may shy from outright compulsion, but a year from now, just try getting on a plane, or even a bus, if you haven’t yet taken part in the largest medical experiment in human history. Nevertheless, skeptics uneasy about hastily developed drugs whose long-term consequences are unknowable are certain to spoil the fun for everybody. For travel to resume, must a global population of nearly eight billion all be immunized? How long could that take

Realism also requires that we apply the roadworks test. Anywhere in the UK, when signage banners that such-and-such a bridge will be closed for repairs until, say, December 19, what would any Briton bet the farm on? That the bridge will still be closed on December 20, if not for the following decade. Or take HS2, whose first phase was meant to be completed by 2026. Last year, the finishing date shifted to 2028-2031 and counting — so hold off on those season tickets. Nightingale flatpack hospitals were astonishing precisely for their defiance of an ironclad rule: every undertaking in the UK takes longer than officialdom claims it will.

Face it. Vaccine approval, production and delivery could easily drag on for many more months than it says on the tin. What worries me is the meantime.

Having extended the costly furlough scheme ‘only’ through March, this government clearly anticipates exercising oppressive social control at least into the spring. For many once-viable businesses, four more months of closures and profit-sapping regulations will mean the difference between survival and bankruptcy. Should a bureaucratic boot remain on the economy’s neck well into next year, kiss your local, your favorite bistro, your high street and perhaps your own job goodbye.

As for the public finances, the Treasury seems afflicted by the caution-to-the-winds fatalism of the obese. Once your weight crosses a certain threshold, the situation feels hopeless, so what’s another packet of crisps? Likewise, a deficit closing on £350 billion ($465 billion) is already off the charts, so what’s a few more expenditures? How about furlough through next December — why not? Spending-wise, the UK has moved from crisps to deep-fried Mars bars. But there is a difference between weighing 30 stone and 45, as any dieter discovers when arduously forgoing one biscuit at a time. Continued profligacy will make a final reckoning even worse.

A full-service NHS also can’t wait for us all to become COVID-impervious. The litany of other health problems exacerbated by coercive restrictions and an NHS myopically consumed with a single illness has grown fatiguingly familiar: cardiovascular disease, cancer, mental health decline, suicide… An NHS additionally obsessed by vaccine delivery could further cramp non-COVID treatments. Infinitely foreshortening queues for standard care might seem to justify all the mean things that Americans say about Britain’s ‘socialized medicine’.

We cannot allow promising vaccines to entice us into acceptance of indefinite subjugation and penury. Civil liberties are rights, not privileges. Normal life is not a special treat awarded only if we behave ourselves. Grown-ups in liberal democracies should make their own decisions about taking medical risks.

And incidentally, do lockdowns work? Published in Frontiers in Public Health just last week, yet another thorough international study found no statistical correlation between COVID mortality and suppressive policies: ‘Stringency of the measures settled to fight pandemia, including lockdown, did not appear to be linked with the death rate.’ Boris Johnson’s government mustn’t condition lifting the pillow now pressed over Britain on the completion of countrywide vaccination — or we could be gasping under goose feathers for quite some time.