Democrat blues: the leadership fears and loathes the grassroots 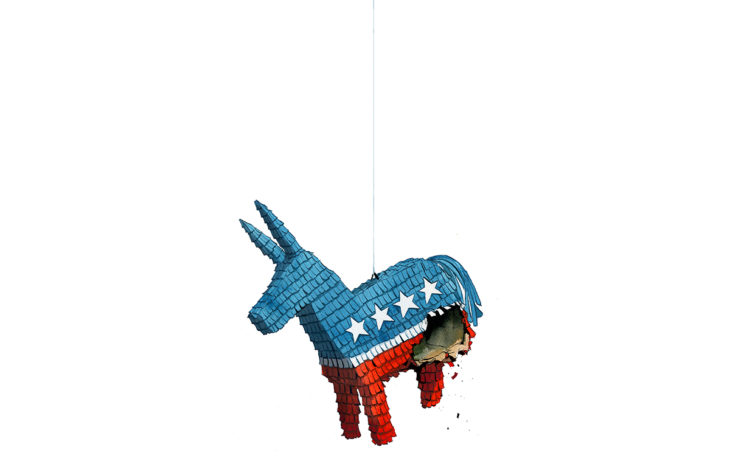 Democrat blues: the leadership fears and loathes the grassroots

‘Today, I’m reflecting on the three years we’ve spent preparing for this moment, the changes we’ve made to make sure we are ready.’ That was Tom Perez, chair of the Democratic National Committee, on February 3, as Iowa Democrats prepared to state their choices in their state’s now infamous caucuses. Proclaiming that the Democratic party is ‘at its strongest when we empower the grassroots’, he expressed pride in ‘the historic reforms we passed to increase transparency and accessibility, and that the power is where it...

‘Today, I’m reflecting on the three years we’ve spent preparing for this moment, the changes we’ve made to make sure we are ready.’ That was Tom Perez, chair of the Democratic National Committee, on February 3, as Iowa Democrats prepared to state their choices in their state’s now infamous caucuses. Proclaiming that the Democratic party is ‘at its strongest when we empower the grassroots’, he expressed pride in ‘the historic reforms we passed to increase transparency and accessibility, and that the power is where it belongs: with our voters’.

Within a few short hours it would become clear to all that the power did not belong with the voters at all but, as Joseph Stalin always liked to stress, with those who counted the votes. These turned out to be befuddled functionaries saddled with vote-monitoring technology that either didn’t work or stopped working when it was horribly evident that Bernie Sanders might be winning. As swiftly became apparent, the vote-counting technology was the work of a company replete with Obama and Clinton loyalists, reaching out from the graveyard of past administrations, their profitable death grip on the party as strong as ever.

Over the next few days, Sanders’s obvious victory in vote-numbers was successfully obscured in the news, as commentators aligned with the DNC eagerly touted the acceptably facile Pete Buttigieg. Just prior to the fateful day in Iowa, Perez had unveiled his nominations for the Democrats’ national convention committees. These formed a representative cross section of the Democratic wing of the corporate political establishment, typified by characters such as Danielle Gray, whose career has consisted of servicing the widely hated health insurance industry as a lawyer, serving as a senior adviser in the Obama White House and then returning to the health insurance sector.

The sorry events were preordained. Three years ago, I stood in a hotel ballroom in Atlanta, watching the DNC vote for a new chairman to succeed the disgraced Debbie Wasserman Schultz, who had been unmasked by WikiLeaks as having helped rig the 2016 nomination for Hillary Clinton. Until a few weeks earlier, the sure favorite for the job had been Rep. Keith Ellison, eloquent, energetic, progressive, hugely popular with the grassroots. Alarmed at the prospect that someone connected to the hated Sanders might get the job, Barack Obama himself, who had presided over the loss of a thousand Democratic seats in federal and local elections during his presidency, sprang into action and recruited the lusterless Perez, his former secretary of labor, to run for the job.

Delegates were strong-armed to vote the right way. The Iowa delegation were told to fall into line or lose their treasured status — oh, irony! — as first-in-the-nation nomination voters. The bullying worked, with Perez squeaking past Ellison by a thin margin. Along the way, a majority of delegates rejected a proposal to refuse corporate dollars, despite protests from the populist faction, because, as one told me, ‘That’s where the money is.’ Ellison, who had been palmed off with the title of deputy chair, ultimately retreated to his native Minnesota. Under Perez’s leadership, the road to the Iowa fiasco has run straight and clear.

Such behavior becomes easier to understand in light of the fact that the party establishment dislikes and fears its base. They are not unique in this. Republican bosses have always felt contempt for the yahoos at the heart of their support, but they are cleverer at concealing the fact. Democrats, on the other hand, appear to espouse betrayal as a core value. Bill Clinton exemplified this tendency, screwing key Democratic constituencies at every opportunity, with policies like Nafta, the anti-black crime bill, welfare ‘reform’ and Wall Street deregulation.

Today, it has been pointed out that Trump and Biden are similar in many ways: with their congenital lying, grabbing women, accelerating mental instability, etc. But while Trump is careful never overtly to propose harming his base by, for example, extolling job-killing free trade or cuts to social security, Biden has positively reveled in such politically inane proposals. Prior to a recent burst of mendacity on the topic, Biden long championed cuts to the already miserable pensions on which Americans depend. Add to his charge sheet a richly documented career of urging the sort of mass incarceration that disproportionately affects black people — actual or potential Democratic voters, by the way, who were thereby deprived of the vote. Despite this, the party establishment cheered and supported his candidacy, at least until Iowans rejected him to a point beyond rescue by the vote-counters.

None of this should have come as a surprise. Whereas the Republicans’ principal mission has long been to gain power and use it to enrich themselves, the Democrats — although certainly not unmindful of those same objectives — have traditionally undertaken the specific subsidiary assignment of reining in and otherwise distracting the populace whenever the latter exhibits a potentially dangerous dissatisfaction with its lot. Foreign wars have served as one eminently useful tool in this respect.

When running for vice president in 1976, Sen. Bob Dole was roundly abused for referring in debate to the 1.6 million Americans killed and wounded in 20th-century ‘Democrat wars’, but it was a fair point. He might have mentioned Woodrow Wilson. Though elected president in 1912 on a reform ticket adopted in the face of overwhelming popular demands for change — progressive candidates drew 70 percent of the vote — Wilson derided such sentiments as ‘ill-humors’. Faced with rising pressure to fulfill his reform mandate, he opted for the more attractive diversion, of ‘great national triumphs’ abroad. Wilson thus artfully steered his country into the ongoing slaughter in Europe, accompanied by harsh repression at home.

Given such a legacy, the current party leadership’s eagerness to trace our political ailments to the malign hand of Vladimir Putin becomes easier to understand. Russiagate, and its bastard sibling Ukrainegate, stand squarely in this rich tradition. The 2016 defeat, so obviously the consequence of a rigged nomination and an inept campaign, clearly threatened control by the consultants, lobbyists and congressional officeholders who dominate the party machinery. The people were angry and had to be diverted. Hence the sustained campaign to persuade us that it had all been a Kremlin plot, and that Trump was Putin’s puppet. When the Mueller investigation failed to find a shred of evidence for this, the focus shifted to Ukraine, but Russia was still in the crosshairs.

‘The United States aids Ukraine and her people so that we can fight Russia over there and we don’t have to fight Russia here,’ declared impeacher-in-chief Adam Schiff in the Senate trial. Trump had (briefly) impeded that fight, and so deserved to be overthrown. Meanwhile, in a telling demonstration of continuing infamy, Democrats quietly joined with their Republican brethren further to loot the diminishing resources of the middle class. The SECURE Act — conceived on Wall Street, sponsored in the House by Democratic congressman Richard Neal and passed with bipartisan support — adjusted the rules for 401(k) retirement plans so as to reduce sharply their value to the heirs of original contributors, a hugely significant regressive measure.

Martial vigor is a treasured element in the party’s preferred image of itself. John Kerry, who launched his public career with a courageous stand against the Vietnam war, refused to denounce the invasion of Iraq as the Democratic nominee in 2004, merely claiming that he would have managed it better.

Two years later, with the war and George W. Bush even more unpopular, the Democrats entrusted the crucial battle for control of the House of Representatives to Rahm Emanuel. This diminutive congressman had learned his trade at the knee of Tony Coelho, a master fundraiser who fostered the enduring and emasculating embrace of the party by big corporations. As chair of the Democratic Congressional Campaign Committee, Emanuel was in charge of selecting candidates for House races. Despite the Iraq disaster that had opened the door to Democratic victory, his preferred choices were veterans who could tout battlefield experience without denouncing the war itself. Above all, they should be free of unwholesomely progressive inclinations. The Democrats did win the House, partly because a number of progressive candidates who had received zero support from Emanuel were nevertheless elected.

But mark the sequel: the Democrats won again in 2008, as Clinton’s financial deregulation bore fruit in the collapse of Wall Street and the resultant crisis. The tottering economy clearly necessitated a massive stimulus as a matter of urgency. Obama managed to provide this but was forced to trim the amount by a significant degree, thanks to the obduracy of ‘blue dog’ congresspeople obsessed with notions of fiscal rectitude. Many of these representatives had been selected with Emanuel’s blessing a few years before.

In consequence, the economic crisis dragged on — and popular dissatisfaction swelled and progressed in ugly directions, culminating in the Tea Party triumph in the 2010 elections that ushered in long years of Republican dominance in legislatures across the country.

As the Iowa fiasco demonstrated, these salutary lessons have been studiously ignored. For example, Alexandria Ocasio-Cortez’s triumph in displacing incumbent Joe Crowley drew swift response from the party machine. Cheri Bustos, current chair of the DCCC, enforced a rule forbidding consultants from working on campaigns against incumbent Democrats on pain of being blacklisted from party-approved campaigns. (While the consulting profession overall often delivers little value for money, some of its members — such as specialists who navigate the complex legal thicket of campaign finance regulation — are entirely necessary.)

Thus, in an ongoing race in south Texas, incumbent Henry Cuellar, who has voted for the Trump agenda around 70 percent of the time, enjoys party support, while his primary opponent, Jessica Cisneros, is cut off from official consultant assistance. And, in a triumph of complacency over experience, the party’s affection for military candidates, preferably female, seemingly remains unabated, as suggested by Chuck Schumer’s endorsement of M.J. Hegar, late of the US Air Force, despite her 2018 loss to a Republican in a central Texas House race.

Battered by Trump but menaced by the rising power of the Sandernistas, the Democratic party establishment faces an invidious choice: throw in the towel and endorse the left in hopes of harnessing the only source of grassroots energy available, or sell out to the highest bidder. Stand by to be stopped and frisked by Mayor Mike Bloomberg.