The New York Times’s op-ed confirms everything the President has said about his enemies. 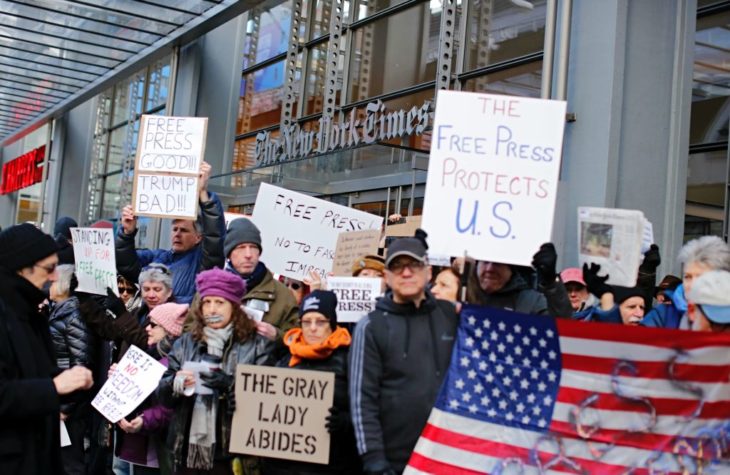 People take part in a protest outside the New York Times on February 26, 2017 in New York. The White House denied access Frebuary 24. 2017 to an off-camera briefing to several major US media outlets, including CNN and The New York Times. Smaller outlets that have provided favorable coverage however were allowed to attend the briefing by spokesman Sean Spicer. The WHCA said it was “protesting strongly” against the decision to selectively deny media access. The New York Times said the decision was “an unmistakable insult to democratic ideals,” CNN called it “an unacceptable development,” and The Los Angeles Times warned the incident had “ratcheted up the White House’s war on the free press” to a new level. / AFP / KENA BETANCUR (Photo credit should read KENA BETANCUR/AFP/Getty Images)

A couple of days ago, The New York Times took what it called the ‘rare step’ of publishing an anonymous op-ed column supposedly by a ‘senior official’ in the Trump administration. The column, which might have been written by Bill Kristol and then run through Pete Wehner’s patented Hand-Wringing Moralising Machine, is the perfect epitome of that emetic, holier-than-thou species of Never-Trump rhetoric practiced by newly irrelevant, nominally conservative pundits.

‘The root of the problem,’ writes this latter-day Mr Podsnap, ‘is the president’s amorality [unlike Hillary Clinton’s, I guess, who was the most corrupt candidate ever to run for the...

A couple of days ago, The New York Times took what it called the ‘rare step’ of publishing an anonymous op-ed column supposedly by a ‘senior official’ in the Trump administration. The column, which might have been written by Bill Kristol and then run through Pete Wehner’s patented Hand-Wringing Moralising Machine, is the perfect epitome of that emetic, holier-than-thou species of Never-Trump rhetoric practiced by newly irrelevant, nominally conservative pundits.

‘The root of the problem,’ writes this latter-day Mr Podsnap, ‘is the president’s amorality [unlike Hillary Clinton’s, I guess, who was the most corrupt candidate ever to run for the presidency]. Anyone who works with him knows he is not moored to any discernible first principles that guide his decision making.’ If only, if only President Trump had the wisdom to consult well-moored (and moral!) folks like this unnamed benefactor who is (he tells us) working diligently to ‘preserve our democratic institutions while thwarting Mr Trump’s more misguided impulses until he is out of office.’

What a guy! Giving the devil his due, our upholder of virtue acknowledges that many of President Trump’s — at least, his administration’s (let’s not let the devil get too much credit) policies ‘have already made America safer and more prosperous.’ Indeed. He might have added that in the 18 months since he took office, Donald Trump has presided over the most astonishing successful presidency in modern history, maybe ever.

I won’t bother to recite that litany. Suffice it to say that it begins with judicial appointments, moseys on through the economic growth, unemployment, and stock market numbers, passes by stunning consumer confidence reports, makes a stop at the revitalisation of our military, and certainly takes in many daring foreign policy gambits, from the decision (finally) to move our embassy in Israel to Jerusalem to the revocation of the disastrous Iranian deal through which the Obama administration covertly funded the mullahs’ efforts to acquire nuclear weapons.

There’s a lot more to that list, by the way, and I suspect the author of this curious op-ed is fully aware of this painful fact.  Which is why he is at such pains to take the only viable way out of his dilemma. Donald Trump has been unexpectedly, ostentatiously successful. That reality is too painful to admit without a filigree of negative counterpoints. Solution: say he is a bad man. Call him names. Accuse him of being without principle. Up the ante and say the principles he lacks are ‘first principles.’ That sounds so much worse. (By the way, to what ‘first principles’ did Barack Obama subscribe — apart, I mean, from blaming America and endeavouring to make us poorer and less potent?)

The final gambit is to compare the President to last week’s freshly minted saint, John McCain. ‘We may no longer have Senator McCain. But we will always have his example — a lodestar for restoring honour to public life and our national dialogue.’ Right.  Have you looked at the McCain-Feingold Act recently?  Have you wondered why we are still saddled with Obamacare? John McCain was, early in his life, a brave patriot who withstood brutal torture at the hands of Vietnamese Communists with honour. He was also a petty, grudge-holding grandstander who was always willing to sell out his party when it suited his private interests. His recent beatification by the left and the irrelevant right is a curiosity that cannot be explained absent the pathological hatred of of Donald Trump.

The putative ‘senior official’ writes that ‘President Trump shows a preference for autocrats and dictators, such as President Vladimir Putin of Russia and North Korea’s leader, Kim Jong-un, and displays little genuine appreciation for the ties that bind us to allied, like-minded nations.’ In fact, Trump shows a preference for negotiating with all important players on the world stage for the benefit of the United States.  The end of his talks with Kim ‘Rocket Man’ Jong-un is the denuclearisation of North Korea, a goal which if achieved should earn President Trump the Noble Peace Prize. The end of his talks with Vladimir Putin is a workable relationship with the world’s first or second largest nuclear power, a relationship that was scuttled by the Obama administration’s effort to ‘reset’ it.

The purveyors of fake news really ought to bow down and say a prayer each morning for Richard Nixon. Without Watergate, how could they talk about any political scandal, which doesn’t achieve lift-off until the word ‘gate’ has been suffixed to some identifying noun or adjective.  And the homage doesn’t end there, as we can see from the fact that people are already talking about ‘Deep State Throat’ as they search in earnest for the author of the op-ed.

It was announced on Twitter that a wealthy conservative has offered a $50,000 reward to the sleuth who uncovers the identity of the op-ed’s author.  He should save his money.  Maybe it is someone who works in the White House. More likely, it is a fabrication constructed for, and possibly orchestrated by, The New York Times.  Apart from confirming everything that the President has said about the malevolent, anti-Trump activities of the Deep State, its importance in the real world of political accomplishment is nil.

I have no doubt that the author or authors of this repellent, moralising piece of humbug is correct that various bureaucrats in the White House and elsewhere are ‘working diligently from within to frustrate parts of [Trump’s] agenda.’ That’s what the permanent bureaucracy does to anyone who challenges its hegemony.  Has anyone done more to frustrate that hegemony than Donald Trump?

Donald Trump was elected because he promised to do something about business as usual in Washington.  He has a long way to go to cleanse those Augean Stables, but he has made a tremendous start, which is precisely why the occupants of those stables are so alarmed.  Here is someone, not of their tribe, who is succeeding beyond their wildest dreams. But he pays them no heed and patently could not care less that they disapprove of him.

This latest bulletin from the engine room of fake news barely rises above the level of name calling. It has the acrid smell of desperation.  With every week that passes, Donald Trump ticks off another campaign promise fulfilled. It was what he was elected to do. Those who elected him like winning. And more and more people who were anti-Trump at the outset are looking around and liking what they see. The former newspaper that Donald Trump calls the ‘failing New York Times’ is a monument to impotent irrelevance. This latest prank unfolds just as Brett Kavanaugh is about to be confirmed to the Supreme Court.  The dogs are barking, but the caravan moves on.