The death of the Republican right has been greatly exaggerated

Predictions of GOP doom have a long history of being wrong 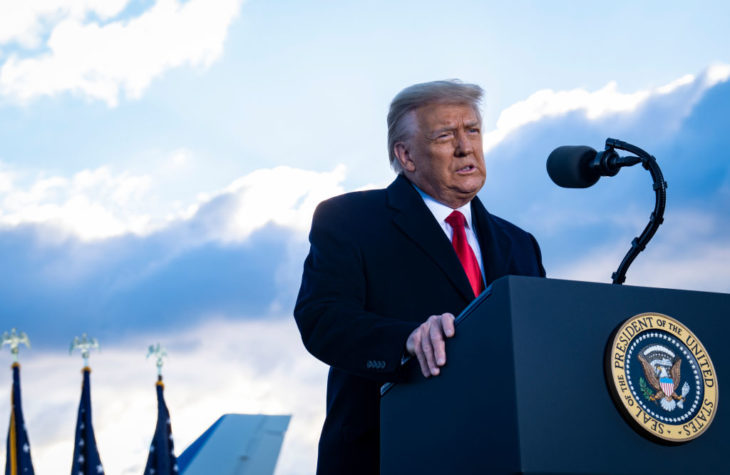 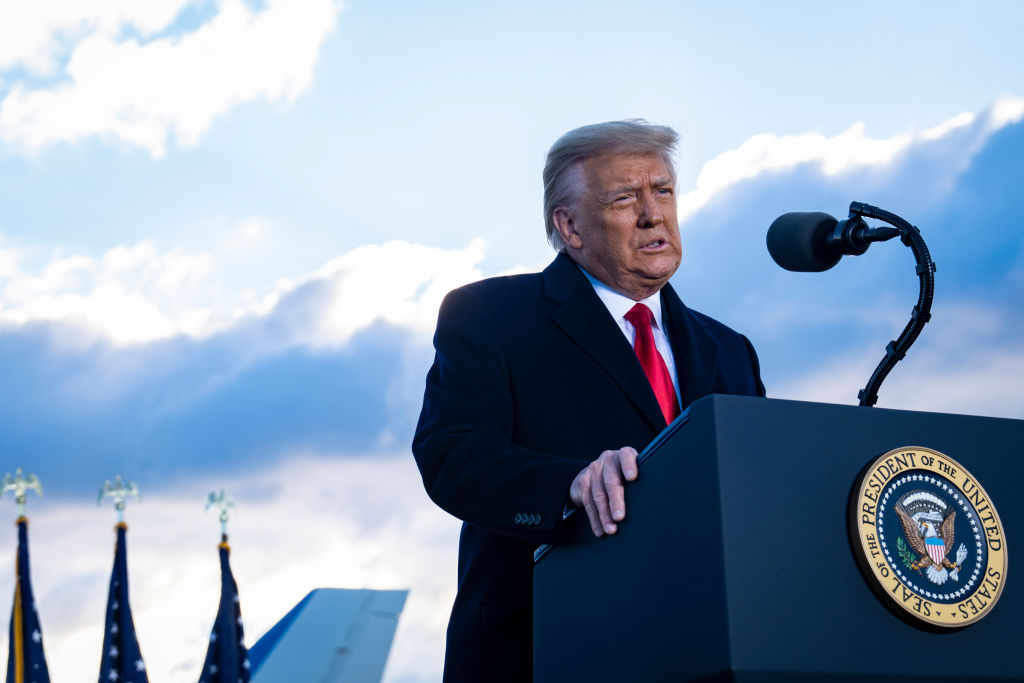 The death of the Republican right has been greatly exaggerated

As Donald Trump goes on trial in the Senate, the Republican party faces the possibility of a crack-up. Trump will almost certainly be acquitted, but the vote will be the third time in two weeks that GOP disunity is in the spotlight. Last week the attempt to oust Liz Cheney from her leadership role in the House saw the pro-Trump wing of the party come up short. Then 11 Republicans voted with the Democrats to strip Rep. Marjorie Taylor Greene (R-Ga / Q-Anon) of her committee assignments. Now it’s the Senate GOP’s turn to showcase...

As Donald Trump goes on trial in the Senate, the Republican party faces the possibility of a crack-up. Trump will almost certainly be acquitted, but the vote will be the third time in two weeks that GOP disunity is in the spotlight. Last week the attempt to oust Liz Cheney from her leadership role in the House saw the pro-Trump wing of the party come up short. Then 11 Republicans voted with the Democrats to strip Rep. Marjorie Taylor Greene (R-Ga / Q-Anon) of her committee assignments. Now it’s the Senate GOP’s turn to showcase its divisions.

​Cheney’s survival showed that the Trump faction isn’t strong enough — in Congress anyway — to purge the anti-Trump faction. Trump’s acquittal will mean his enemies inside the party can’t get rid of him, either. The two factions are seemingly stuck with each other. Or are they? The Republican civil war just might lead to secession, not from the United States (not yet, anyway) but from the GOP. Will Trump bolt the party and build a new one of his own, the Patriot party?

Democrats hope so, assuming that it will be the death of the GOP. But then, the Republican party has defied the most confident predictions of its demise before. The Republicans have supposedly been on the brink of extinction some four or five times in the last five decades. They were doomed after Barry Goldwater’s landslide defeat in 1964. The party’s only hope, according to a notably liberal media even then, was to move to the left. Instead, the party moved to the cultural right with Richard Nixon and won the next two presidential contests, including a 49-state blowout victory in 1972 that eclipsed Lyndon B. Johnson’s drubbing of Goldwater.

​But then the GOP was doomed again, according to the same sorts who predicted the party’s annihilation after 1964. This time, Watergate would be the end of the party. And sure enough, even Nixon’s resignation couldn’t save the congressional GOP from slaughter in the 1974 midterms. But the GOP just wouldn’t stay dead, and after narrowly losing the 1976 presidential contest, the party went on to win the next three in a row.

​More recently, the GOP was imagined to be ‘demographically doomed.’ Republicans would never be able to win enough of the white vote to make up for the increasing non-white percentage of the voting public. But in 2016 Donald Trump appeared to do just that and flipped several ‘blue wall’ Democratic states. In 2020, he lost because a critical segment of white voters turned against him, but he actually improved his share of the vote among blacks and Hispanics. Two of the states that were meant to be turning purple or blue at this point thanks to the GOP’s demographic doom — Texas and Florida — are in fact still solidly red.

​Wrong in the 1960s, wrong in 1970s, wrong in the past decade, the prophets of Republican collapse now have a new narrative that leads to the old familiar conclusion: Trump! Trump is the death of the Republican party! This time for real!

​The smarter sort of liberal or ex-conservative who ventures this claim knows that the numbers suggest otherwise. Trump received a record-breaking number of votes for a Republican in 2020, and if he hadn’t had COVID and its consequent recession blotting his record, he would obviously have done better still. So much better that he would have turned losing margins into winning ones in enough states to secure a second term?

Maybe, but even if not, Trump’s defeat wouldn’t be reason for Republican despair. If the Republican right could bounce back from Goldwater’s rout to take over the party, and if the party could win five of the next six presidential elections, then neither the GOP of today nor its right wing should be discouraged. The key thing about Goldwater’s race was not his defeat but what his candidacy revealed about the obsolescence of the New Deal consensus. Goldwater himself might have been more or less an old-fashioned anti-New Dealer, but the Goldwater movement represented a great change in America’s political future: the rise of a new right.

A new right began to take shape during the Trump years as well. But this time, according to the more sophisticated prognosticators of Republican extinction, the result of a rising right really will be the shattering of the GOP. If Trump does form his own third party, Democrats expect to beat two fratricidal right-leaning parties easily, much as Woodrow Wilson beat the fratricidal progressive Republicans William Howard Taft and Theodore Roosevelt (a former GOP president running as a Progressive) in 1912.

Even if Trump doesn’t start a new party, the divisions within the GOP are irreconcilable: Trump voters won’t turn out for non-Trump Republicans, and non-Trump Republicans likewise won’t vote for Trump-ish nominees. What happened in the runoff races for Georgia’s two Senate seats in January will happen everywhere.

If Trump were a conventional political strategist, the Patriot party would be his insurance policy against Senate conviction and any other measures that anti-Trump GOP leaders might be tempted to take against him. A pro-Trump third party could cost Republicans elections even in states and districts where Trump supporters can’t defeat an anti-Trump candidate in a GOP primary. The threat of a new third party gives Republican insiders reason to think twice about rigging nominating contests against Trump allies (or Trump himself in 2024).

​Yet that kind of planning is hardly characteristic of Trump, and it’s probably not necessary, either. About 80 percent of the Republican base still seems to be favorably disposed to the ex-president. Trump has little to fear from a Senate trial. Nor would it be in the self-interest even of most GOP elites to exclude Trump supporters from the party: they are the party. Splitting those supporters between two parties, the GOP and the Patriots, would also be political suicide for Trump himself: crippling to the GOP but also depleting the pro-Trump faction within the GOP, while only creating a smaller third party (smaller because it presumably couldn’t make up for the 20 percent of Republicans who presently stick with the Grand Old Party but don’t like Trump).

The expense and logistical challenges involved in creating a third party are formidable as well, and Donald Trump is not known for enjoying the intricacies of political organizing. That is in fact the primary weakness of the Trump faction in the GOP. For all its strength, the faction lacks the organization to wield its power effectively, even in such a seemingly straightforward matter as cashiering Liz Cheney.

No, the Patriot party is probably not on the horizon. And if the likes of Cheney are able to hold on not only to office but to leadership positions, their faction is not going to walk away, either. (Though holding onto office is not something Cheney can take for granted: she’s certain to face a primary challenge in 2022.)

Elite Republicans still have confidence that organization will beat enthusiasm in the long run. There’s precedent for this, after all. Ronald Reagan was a hero to the GOP’s right wing, yet within Reagan’s own administration the party establishment often outmaneuvered the right. And after Reagan, the establishment succeeded in subordinating the right completely, with the result that the next two Republican presidents, the two George Bushes, came from the establishment’s ranks. The establishment and the neoconservatives — essentially the same thing by 2000 — got what they wanted with the next two GOP presidential nominees after the George W. Bush years as well. John McCain and Mitt Romney did not come from the right wing of the party. If the Reagan Revolution could be co-opted so thoroughly, the far less organized Trump movement can also be yoked to conventional GOP leadership — or so the theory goes.

The flaw in that theory lies in the wider political conditions that led to Trump in the first place, conditions which have resurrected the Republican right after every setback. The GOP establishment is essentially identical to the Democratic establishment, as shown by the ease with which so many Bush administration officials and neoconservatives slid over to supporting Joe Biden against Donald Trump. But the consensus politics of the bipartisan elite no longer commands sufficient assent from the public, and in fact the liberal hegemony of the postwar era has always generated resistance — which again and again takes the form of right-wing popular movements. The future doesn’t belong to the politics of George Bush, Joe Biden, or Liz Cheney. Whether it belongs to someone like Donald Trump remains to be seen.

But the Republican right thrives on the decay of Washington’s liberal consensus, and that consensus cannot be saved by COVID or the repression of dissent on social media. Winning the 2020 election was one thing; reviving faith in the politics of yesteryear is quite another. The Republican party’s future is bright indeed if it can foster an organized right. If not, entropy will keep the party and the right alive, though their gains will only be prelude to the next crisis and yet more prophecies of doom.