How the GOP can win by losing Georgia

There are upsides to giving Joe Biden unbridled power 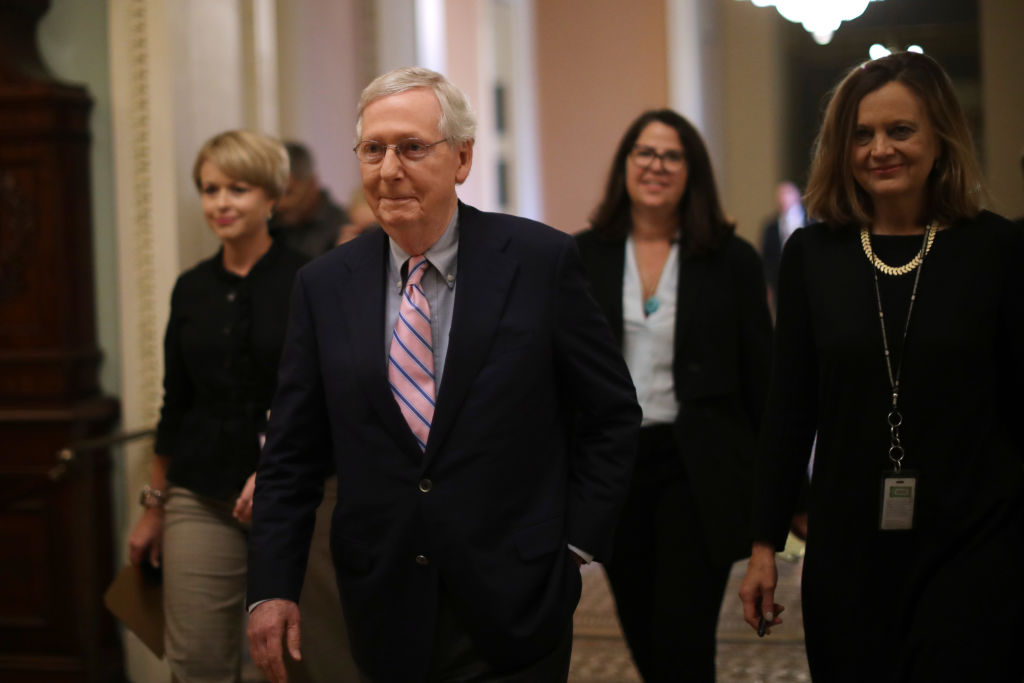 How the GOP can win by losing Georgia

Not long ago I attended a gathering of young White House and congressional Republican staffers. Conversation turned, as you might expect, to the prospects for the GOP in Georgia’s two Senate runoff races in January — races that will swing control of the chamber if Democrats win them both. Only one young man dared to say the unsayable: not only would the GOP lose those races, but it should lose those races for the party’s own good.

His points were sharp, even if no one was entirely persuaded. There would indeed be a silver lining to...

Not long ago I attended a gathering of young White House and congressional Republican staffers. Conversation turned, as you might expect, to the prospects for the GOP in Georgia’s two Senate runoff races in January — races that will swing control of the chamber if Democrats win them both. Only one young man dared to say the unsayable: not only would the GOP lose those races, but it should lose those races for the party’s own good.

His points were sharp, even if no one was entirely persuaded. There would indeed be a silver lining to losing the Senate majority, and while few Republicans will wish for that, Trump voters will have some consolation if David Perdue and Kelly Loeffler go down next month.

For one thing, Democrats and their friends in the media will not find it quite as easy to blame their every frustration on Mitch McConnell if Joe Biden’s party gains full control of the federal government. Republicans dread the prospect of Democrats holding full power. But full power also means full responsibility, both for what does and what doesn’t get done.

Let’s see whether Biden can keep the left wing of his party happy while also trying to govern as an establishment figure. Let’s see how the public reacts in the midterms two years from now, when Republican discontent will be maximally pressurized and ready to blow.

A McConnell majority is a steam valve that releases discontent and muddies responsibility. And that’s exactly what Biden needs to keep his party together: ‘Don’t blame me, I just can’t get anything past that all-powerful Cocaine Mitch!’

A bad turn for the Georgia Republicans in January deprives Biden of his excuse. Even better, with a 50-50 Senate produced by defeats for Loeffler and Perdue, guess who has to go on record to cast the deciding vote in party-line divisions?

Vice President Harris, who would thus be directly accountable for the most polarizing and divisive of congressional acts. And let the Democrats worry about keeping West Virginia’s Joe Manchin and Arizona’s Kyrsten Sinema in line with their majority. Full control of the government puts maximum stress on the Democrats’ fault lines. By contrast, who holds the decisive margin in a Republican Senate with a one- or two-vote majority? Susan Collins, Lisa Murkowski, Mitt Romney — the party’s liberal and establishment side. The laws and appointments that bring together the likes of these Republicans with Biden and the House Democrats are often the worst of both worlds: pure Clinton-Bush globalism and financialism. It’s the old Iraq War coalition all over again.

That coalition really belongs in a single party, so it cannot exercise its will regardless of how the American public votes. For now, the GOP has the best chance to purge itself of its post-Cold War establishment and present voters with a clear choice in the future. Democrats, as the party of Biden, are the party openly identifying with the policies that have led to decades of foreign-policy drift, plummeting industrial employment, rising income inequality, and declining life expectancy — the last of those one of the truly historic developments of the Obama-Biden years.

Both parties have had gruesome records over the last 30-odd years, but while Republicans are in the throes of change, thanks to Donald Trump, Democrats are led by a man who was first elected to federal office in 1972. For Joe Biden and Democrats of his mindset, the 1990s are still the future. Younger Democrats want a revolution — either socialist or cultural or both. Let them and Biden fight it out, the better for new Republicans to sweep in two years from now. Majority Leader McConnell only retards the process.

But wouldn’t a 50-50 Senate where Kamala Harris has the crucial 101st vote give us DC statehood and thereby prevent the GOP from ever having a Senate majority again? Not likely — DC statehood is not an overwhelming popular cause outside of the District itself, hardly the kind of thing that gets through on a tie-breaker vote, and it’s not a clean shot legally, either: DC would first have to be converted into something that was neither a federal district (which under the Constitution is ultimately subordinate to Congress, and thus probably not eligible for statehood) nor a part of a state. Is this where the Biden administration wants to spend its political capital, limited as it is?

Packing the Supreme Court is procedurally easier but no less politically hazardous. Loading up the Court with new justices intended explicitly to shift the ideological balance is a move that could hardly be better calculated to provoke a popular backlash — Americans still cherish the idea of a Court that’s above politics and whose ideology changes only gradually. And once Democrats set the precedent, there would be nothing to stop Republicans from packing the Court their way the next time they enjoyed single-party dominance of the elected institutions in Washington. No, Democrats do not realistically expect to pack the Court. What they’re hoping for is a chance to replace Clarence Thomas if he retires or dies, but at a mere 72 years young, the odds of Justice Thomas being around to see the results of the 2024 midterms are a fair bit better than the odds that Joe Biden (78) or Nancy Pelosi (80) will be. Nor is Justice Thomas the retiring type. He remembers what Chairman Joe Biden’s Senate Judiciary Committee put him through in 1991.

No matter how strategically intriguing the possibilities of losing an election might be, no party wants to forfeit control of a part of the federal government, and few Republican voters, even now, are mad enough at politics as usual to root for Loeffler’s and Perdue’s defeat. But the two Republican senators from Georgia are troubled incumbents who might just lose anyway. If they do, the GOP should look up, for more power will only more quickly expose the Democratic party’s incurable vulnerabilities.