It could expand the war yet Congress has had no say 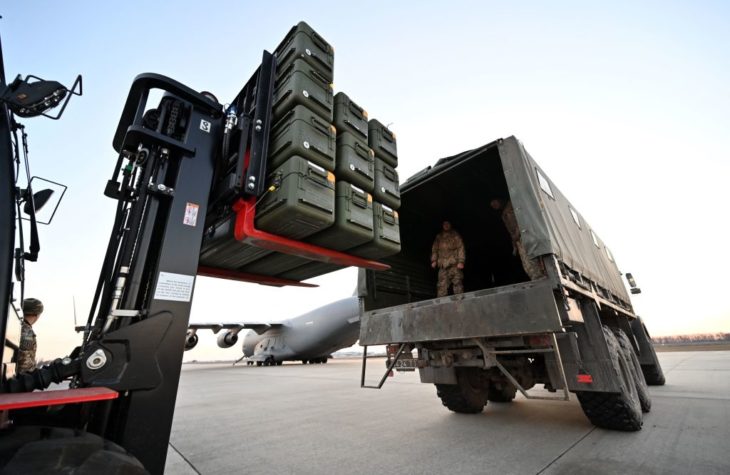 Servicemen of Ukrainian Military Forces move US made FIM-92 Stinger missiles, a man-portable air-defence system (MANPADS), that operates as an infrared homing surface-to-air missile (SAM), and the other military assistance shipped from Lithuania to Boryspil Airport in Kyiv on February 13, 2022. (Photo by SERGEI SUPINSKY/AFP via Getty Images) 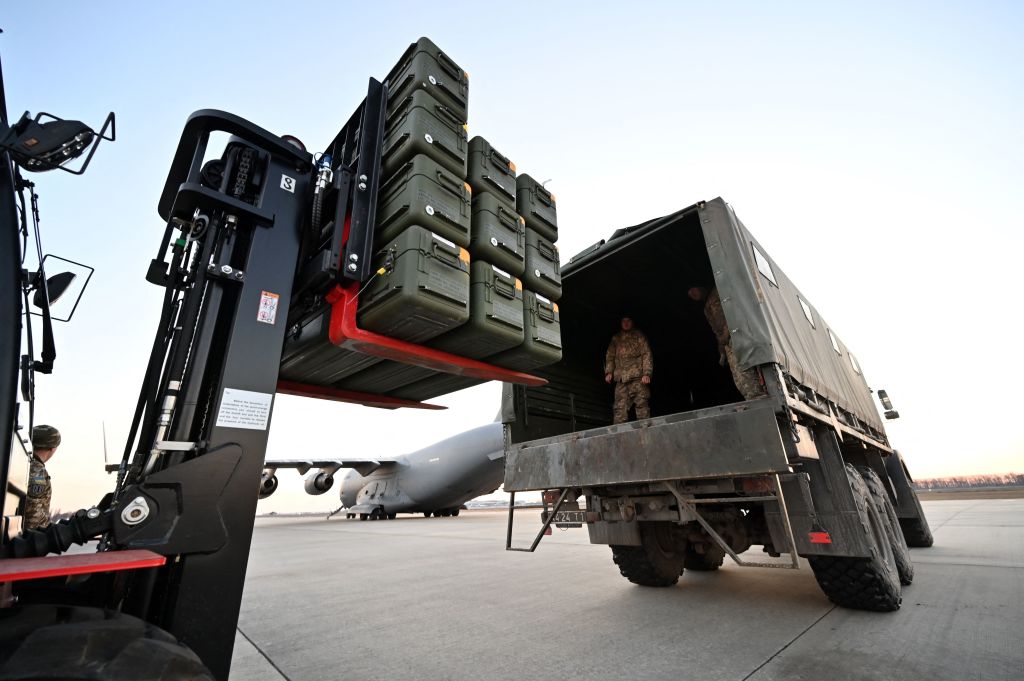 Over the last four months, the Biden administration has assured us that it is only sending “defensive weapons” to Ukraine. It's a claim that's become more difficult to believe as more sophisticated systems are announced seemingly every week that do not require further congressional approval.

Take the most recent example. The White House announced a fresh $1 billion last week for 18 more Howitzers, more long-range missiles for the HIMARS rocket systems announced earlier this month, and a new weapon, Harpoon anti-ship missiles. These are systems that can strike at the more than 20 Russian naval...

Over the last four months, the Biden administration has assured us that it is only sending “defensive weapons” to Ukraine. It’s a claim that’s become more difficult to believe as more sophisticated systems are announced seemingly every week that do not require further congressional approval.

Take the most recent example. The White House announced a fresh $1 billion last week for 18 more Howitzers, more long-range missiles for the HIMARS rocket systems announced earlier this month, and a new weapon, Harpoon anti-ship missiles. These are systems that can strike at the more than 20 Russian naval vessels accused of blockading Ukraine’s eastern ports.

If critics were debating the wisdom of sending HIMARS (​​High Mobility Artillery Rocket Systems) with medium-range missiles in the context of falling further into a proxy war with Russia, the idea of sending weapons that can sink Russian ships seems to stretch the idea of “defensive” into incredulity.

Yet that debate isn’t even happening. Aside from funds that might be used for Foreign Military Sales (FMS), which Congress can try to block after review, the White House and Pentagon can draw down on the $40 billion approved last month using a number of streams that do not need lawmakers’ approval. This means that those HIMARS can at some point be outfitted with longer range missiles (150 miles versus 45 miles).

It also means that tomorrow the Pentagon could upgrade from the Harpoon anti-ship missile (range of up to 150 miles) to the newer and longer range Naval Strike Missile, which has a range of up to 300 nautical miles and is reportedly already being considered.

There are plenty of lawmakers demanding that this happen. Just last week during the annual Center for a New American Security (CNAS) conference, Congressman Adam Smith called on the White House to send longer range weapons to Ukraine.

“I don’t agree with the President on the notion that we shouldn’t give them long range strike missiles, because I think he’s sort of buying into Putin’s rhetoric here,” Smith said. He also wants to send Ukraine our best killer drones, which is under active consideration. While these would be part of a military sale and require congressional review, it’s unlikely that vastly outnumbered critics in the Senate would be able to block it.

The recent tranche of $1 billion taps into the Presidential Drawdown Authority fund, which uses existing stocks of Defense Department materiel (this is where the additional Howitzers and HIMARs ammunition will come from), and the Ukraine Security Assistance Initiative (USAI), which will procure the Harpoons from industry. Boeing currently manufactures the Harpoons.

According to the Congressional Research Service, since August 2021, the White House has authorized more than $4 billion in PDAs, which do not require congressional approval. More than $6 billion in USAI monies have been appropriated (not all yet obligated) in 2022 alone. This is all included in the $53 billion authorized by Congress — military and humanitarian aid — since February.

According to CSIS budget guru Mark Cancian, Washington is spending some $310 million a day on weapons and humanitarian aid for Ukraine. This raises some potentially uncomfortable questions. No matter how strongly one feels about giving the Ukrainians the tools to defend themselves in order to end the war with Russia (which we all hope for), it is uncertain that slushing in billions in new weapons will ultimately accomplish that.

“The longer the war continues, the greater the death, destruction, and dislocation it will reap,” writes Georgetown University’s Charles Kupchan, warning against fueling Ukrainian confidence that it can expel Russia completely from its territory.

If officials in charge understand that, they aren’t saying so publicly. In a recent interview, NATO chief Jens Stoltenberg said that “nobody knows” how long the war will last, and that we “need to be prepared for it to last for years.”

The $40 billion has a “spend by” date of September 30. News reports already anticipate another package after that. And concerns over oversight are growing.

“Americans should know how their taxpayer dollars are being spent,” said Senator Rand Paul in a statement to The Spectator World. Paul says this is why “I requested an amendment to the $40 billion Ukraine bill which would have designated an Inspector General to oversee funds to Ukraine.”

That request did not pass. Spending under the current $40 billion package contains language that would require regular Defense Department reports to Congress and includes $5 million to “enhance oversight,” says Cancian. “These provisions recognize the problem but may be too limited, given the extent of the aid and its sensitivity.”

It’s clear from the reporting that delivery speed is far more a priority than worrying whether aid will end up in the wrong hands. Furthermore, we do not know if weapons will be used in the “defensive” manner that Biden assures us it will. Recall that officials acknowledged (then later tried to walk back) that our own intelligence-sharing has been used to kill Russian generals and sink one of Russia’s warships.

Ukrainian assurances that they will not use longer range weapons to hit inside Russian territory, risking a broader NATO confrontation or worse, seem thin in that light.

The American people may yet wake up to the reality that they are funding an increasingly protracted war overseas, that it could end up killing more civilians than was even anticipated, and that it could employ increasingly sophisticated weapons over which their own representatives have no say.

“The least President Biden and Congress could do is tell the American people where their money is going,” said Paul. The sad thing is that they are telling us: it’s just after-the-fact and there is little we can do about it.