The bewildering bombardment of Bill Barr 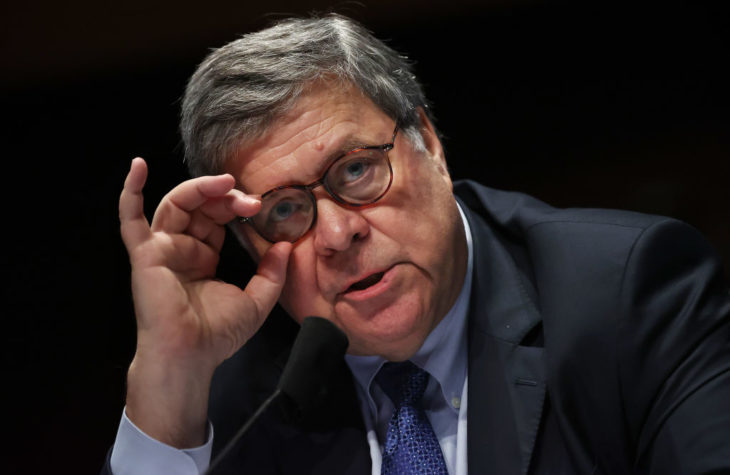 Attorney General William Barr testifies before the House Judiciary Committee hearing in the Congressional Auditorium at the US Capitol Visitors Center July 28, 2020 in Washington, DC. – In his first congressional testimony in more than a year, Barr is expected to face questions from the committee about his deployment of federal law enforcement agents to Portland, Oregon, and other cities in response to Black Lives Matter protests; his role in using federal agents to violently clear protesters from Lafayette Square near the White House last month before a photo opportunity for President Donald Trump in front of a church; his intervention in court cases involving Trump’s allies Roger Stone and Michael Flynn; and other issues. (Photo by Chip Somodevilla / POOL / AFP) (Photo by CHIP SOMODEVILLA/POOL/AFP via Getty Images)

The bewildering bombardment of Bill Barr

Attorney General William Barr’s seemingly interminable testimony before the House Judiciary Committee on Tuesday demonstrated two things. First, AG Barr is the most patient and unflappable man in Alpha Centauri. Second, his would-be inquisitors in the Democratic party have succumbed to a virus far more toxic than the Wuhan flu.

Political epidemiologists who identify the virus as Trump Derangement Syndrome are not quite right in their diagnosis. To be sure, TDS is a common comorbidity that renders this new infection more virulent and debilitating. But the nervous disorder on view yesterday, while it presupposes tertiary Trump Derangement...

Attorney General William Barr’s seemingly interminable testimony before the House Judiciary Committee on Tuesday demonstrated two things. First, AG Barr is the most patient and unflappable man in Alpha Centauri. Second, his would-be inquisitors in the Democratic party have succumbed to a virus far more toxic than the Wuhan flu.

Political epidemiologists who identify the virus as Trump Derangement Syndrome are not quite right in their diagnosis. To be sure, TDS is a common comorbidity that renders this new infection more virulent and debilitating. But the nervous disorder on view yesterday, while it presupposes tertiary Trump Derangement Syndrome, is actually distinct from that malady. I am not sure that public health officials have yet settled on a name for the sickness. Yet like the end stages of rabies, everyone can recognize its appalling symptoms.

The world saw a violent outbreak of the disease during the confirmation hearings for Judge, now Justice Brett Kavanaugh (how I like writing ‘Justice Brett Kavanaugh’). To laymen, it looks a bit like Tourette’s syndrome: uncontrollable nervous tics, inappropriate verbal outbursts, shocking disregard of mannerly behavior, et cetera.  The breathtaking savagery of the attack on Brett Kavanaugh, combined with its utter baselessness, will stand forever as a defining case in the annals of political pathology. The treatment of Attorney General Barr by the Democrats will take its place beside that disgraceful episode.

Perhaps the most difficult thing for newcomers to adjust themselves to when first confronting exhibitions of this political-moral disturbance is the sheer brazenness of its presentation. Did Sen. Whitehouse of Rhode Island really parse Brett Kavanaugh’s high-school yearbook for hints that he participated in gang rapes?  Did Jerry Nadler, the faintly comical chairman of the House Judiciary Committee, really accuse William Barr of betraying the ‘professional core’ of the Justice Department, of ‘flooding federal law enforcement into the streets of American cities’ in order to ‘forcefully and unconstitutionally suppress dissent’?

The governing irony of Tuesday’s spectacle is also the defining characteristic of today’s Democratic party: loudly accuse others of wrongdoing that you yourself are guilty of. Freud called it ‘projection.’ The rest of us call it hypocrisy.

In the case of William Barr, the most frequently expressed charge was that he has politicized the Justice Department by doing President Trump’s bidding. Never mind that Eric Holder infamously described himself as Barack Obama’s ‘wingman’, willing and able to carry out his leader’s agenda. William Barr, by contrast, looking forward to a well-earned quiet retirement, was lured back to his old job as attorney general only because of his concern over the rank politicization of the Justice Department under the Obama administration. My own suspicion is that Barr is himself often appalled by the President’s tweets and general rambunctiousness. He puts up with it because he loves the country and wants to serve it.

As AG Barr noted in his opening statement, the most basic job of government is to preserve the rule of law. The rule of law holds sway only when it is impartially applied. Mob violence has no place in a country governed by the rule of law, but mob violence is now sweeping the country. The Democrats refuse to acknowledge this, describing the mayhem and looting as ‘peaceful protests’, lawful exercises of the public’s First Amendment rights.

Jim Jordan, ranking member of the House Judiciary Committee, put paid to that canard with a video juxtaposing the media’s mindless repetition of the mantra ‘peaceful protest’ with shocking scenes from the burning streets of Portland and other sites of insurrection. As Groucho Marx put it, who are you going to believe, me or your lying eyes?

I assume that Barr’s Democratic questioners huddled beforehand to work out an obfuscating strategy, because nearly all of them bombarded him accusations masquerading as questions and then, when he attempted to answer, rudely interrupted him and informed him that they were ‘reclaiming’ their time. It  all seemed like a comic skit until you realized that these malevolent clowns are the people we have elected to govern us. Hank ‘Guam’ Johnson, Eric Swalwell,  Pramila Jayapal, David Cicilline, Zoe Lofgren, Steve Cohen: I am not sure who gave the most despicable performance on Tuesday. They are all horrible people.

Writing about President Trump’s magnificent speech at Mount Rushmore on July 3, I predicted that future historians with mark it as the date when his reelection was assured. I suspect a supporting role will be accorded to the disgraceful performance of the Democrats on Tuesday. They sought to discredit a man of sterling integrity by generating a histrionic wall of groundless accusation. They succeeded in highlighting Barr’s thoughtful deliberateness and commitment to securing the rule of law. They also succeeded — and this made the whole spectacle worthwhile — in underscoring their own essential lack of seriousness and repellent partisan hackery.