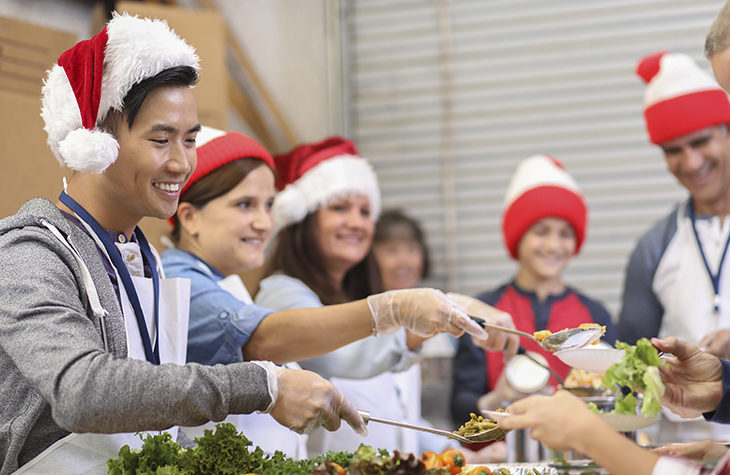 Multi-ethnic, mixed age group of volunteers serves food at a soup kitchen. A variety of food is being served to the under-resourced people in their local community. Christmas season.

Crisis veterans all told me about what a ‘rewarding experience’ it had been for them; some claimed it had been their ‘best Christmas ever’. Some take their teenage children along and they, I’m...

Crisis veterans all told me about what a ‘rewarding experience’ it had been for them; some claimed it had been their ‘best Christmas ever’. Some take their teenage children along and they, I’m assured, love it too. And now when they ask me, ‘How was it?’ and I say, ‘It was OK’, they’re disappointed in me.

I arrived on Christmas Day for the afternoon shift of 3-10 p.m. It began with the Crisis team giving us an introduction to our group leaders, which included Dependable Dave, kooky Lucy in the elf outfit, Sophie with the flashing antlers, and a woman who was so relentlessly cheerful and upbeat she seemed to have come straight from a re-run of Hi-De-Hi! Every speech from a team member was received with applause and loud cries of ‘Wow!’ and waves of high-fives. It had the feel of one of those corporate team-building experiences.

Being a general volunteer requires little in the way of training. We were instructed in just a few obvious rules: no drink, drugs or violence allowed at the center. One solemn-looking woman warned us of something more worrying than the use of drugs or drink: the use of gender bias pronouns. She said: ‘Because someone looks like a woman or a man doesn’t mean they are, so be very careful how you address them. I can’t emphasize this enough.’ But what, I wondered, do we call such a person: it?

Then we were divided up into small groups and led off to help the homeless who were arriving in the main reception area. We have this stereotype of the homeless — dirty and desperate — that comes from seeing them begging on the streets. But here many were so clean, tidy and respectable-looking that it was, at times, hard to tell the homeless from the helpers.

After much waiting around I got my first assignment: toilet duty. This involved standing on guard outside the men’s loo and every so often putting on rubber gloves, arming myself with disinfectant and summing up all my courage to go and check the state of the male sinks and toilets. I was expecting the full Bobby Sands wall-to-wall shit experience, but it was pretty civilized.

The facilities provided for the homeless were excellent: hot showers, haircuts, medical attention, advice, computers, tea, musical entertainment and even beds for the night. And they were attended to by dedicated and resourceful people. Alas, I was not one of them. I have no real practical skills so I felt useless. I had wanted to help change lives — and all I was doing was changing toilet rolls.

But I am good at making conversation, so I went around offering cups of tea and a chance to chat. I quickly discovered that talking to homeless people is exactly like talking to media people at a metropolitan dinner party: they just talk about themselves all the time and have no interest in what you have to say. I know what you’re thinking: it isn’t all about you, Cosmo! That’s true, but it makes having a two-way conversation difficult.

Having served my time in the toilets and then doing dishes in the kitchen, I was looking forward to serving Christmas dinner to tables of hungry homeless people. But even this proved something of a disappointment. I made the mistake of assuming that I would be greeted with beaming faces of gratitude as I put down big steaming mouth-watering plates of turkey, sprouts, stuffing, spuds and white bread sauce.

And many were very grateful — but others were just ungrateful grumblers. Food was sent back because there was too much gravy or too little gravy; the Christmas pudding was often denounced as ‘too bloody sweet’ or just ‘shite’. At one point I shouted out, ‘Who ordered the vegetarian meal?’ and one homeless chap shouted at me ‘Oy, you! Stop shouting over the food’, which I thought was a bit much.

Some volunteers can be a touch sanctimonious about respecting the ‘dignity’ of our ‘guests’. When clearing away the dishes I made a crack about what terrible tippers the homeless were and was instantly upbraided by a furious young lady for my ‘tasteless joke’.

‘If you think that was tasteless, wait till you try the food!’ I said.

She went and joined another group.

The truth is that helping the homeless is really boring — unless you have a special skill to offer. Long tedious hours of manual labor — cleaning dishes in the kitchen, cleaning the toilets, mopping up this and sweeping up that — were followed by long periods of inactivity.

This is not an argument against doing this kind of volunteer work at Christmas. Personally, I got little out of it — and I suspect they didn’t get much out of me. But you could argue that’s how it should be. It really is not about me — or you. There’s something suspect about people like me using the misfortune of others to feel good about ourselves. So I’ll be back there next Christmas.