As we all sat in the waiting room, we wondered what social enormity the doctor might commit next 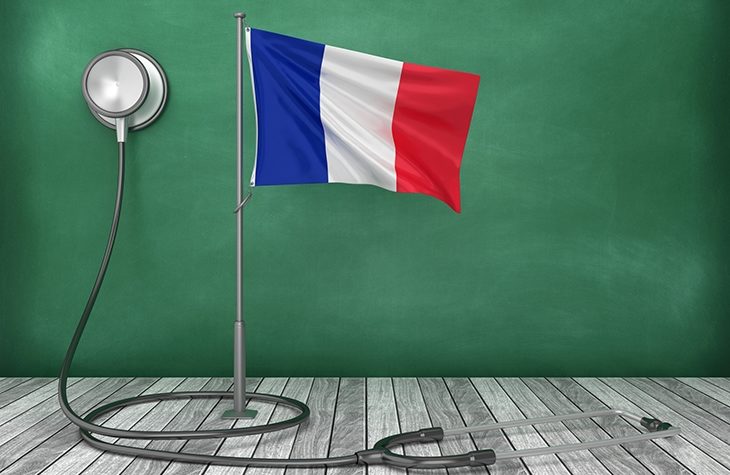 South of France
On a hard chair next to the waiting room door, I sat for an hour defusing thoughts of my own demise, if all else failed employing conscious untruths. As is the custom here in the hot sweet south, a person entering a room greets it. Being nearest to the door, and the first encountered face, I felt responsible for setting the tone of the waiting room’s responses. Interrupting my morbid sophistries, I returned each new entrant’s greeting in a spirited, democratic, welcoming manner. In this I failed as usual to sound that...

On a hard chair next to the waiting room door, I sat for an hour defusing thoughts of my own demise, if all else failed employing conscious untruths. As is the custom here in the hot sweet south, a person entering a room greets it. Being nearest to the door, and the first encountered face, I felt responsible for setting the tone of the waiting room’s responses. Interrupting my morbid sophistries, I returned each new entrant’s greeting in a spirited, democratic, welcoming manner. In this I failed as usual to sound that exact native demotic note and suspect I came across rather as a psychotic waiting for his monthly depot injection.

There were five before me waiting to see the doctor. A young mother, frantic with exhaustion, entertained her baby by dangling it in front of the aquarium. Another was passing tissues to a small boy who sneezed explosively at unpredictable intervals. A biggish woman sat bolt-upright on the waiting room’s other dining chair looking neither left nor right as though eye contact alone might have adverse consequences for her health.

The surgery door opened and Mme Benoit, the doctor, jogged into the waiting room like the fancied welterweight challenger. Celebrated locally for receiving her patients in outfits more readily associated with the trapeze than with the Hippocratic oath, today she was relatively constrained within a sober gray wool dress and knee-length leather boots. No longer young but still quite some piece, Mme Benoit has complete disregard for what other people might think of her, which in my book doubles her sexual attractiveness. She stood radiating command and presence and every eye was turned expectantly on her — even the fearful woman with the tunnel vision’s — as we wondered what social enormity Mme Benoit might commit next. Would she perhaps burst out into a vehement Bacchanalian dance and dithyrambic lament while rending her clothes? Offer shots? Denounce us? Anything was possible.

In the event, the boy’s head detonated in another messy sneeze, and she pretended to panic and scale the nearest wall. He and his mother were next in, thank goodness. She drove them ahead of her into her room like a couple of unpredictable old cows and shut the door behind them. During the next 20 minutes we in the waiting room could hear at varying intervals sneezes, shrieks, furniture being moved about, and breaking china. When they came trooping out again, all three seemed quietly elated by whatever had passed between them.

When it was my turn to go in, Mme Benoit leaned against the door frame and enticed me inside with a beckoning forefinger. Obediently I rose and followed. She jogged ahead of me to her desk and flung herself down into her chair so forcibly that her legs bounced high in the air. Then she swung her body round and faced me across the desk.

I felt as though I were being offered the undivided attention of a veteran screen diva — an elderly Ava Gardner, say. It was a face of ingrained character and the widest possible morality; a face that had been surfeited by conquest and foundered on passion; a face that Harvey Weinstein, even in his pomp, wouldn’t have messed with.

I hoped this Englishman might interest her, make her laugh. I considered also what might be the effect on her of a sliding tackle. But she showed only the politest interest in my urine-infection symptoms, described in appalling French, and none whatsoever in me as a formerly masculine individual. The phone on her desk rang. She plucked it up and the face was instantly and vitally transfigured by a male interlocutor who was at first interesting, then amusing, then very amusing indeed, then deeply shocking, then amusing again. Her interjections, in rapid, gravelly, heavily accented French, and her theatrically mobile features expressed delight, surprise, indignation, scorn, sympathy and admiration. Some of her ripostes were sharply witty, I think. She was on the phone for a good five minutes. During that time I studied her face and the extravagant emotions sweeping across it with neither understanding nor boredom. She enjoyed being looked at.

Then she slammed down the receiver, jumped to her feet, jogged around to my side of the table, parked her buttocks on the table edge and looked down at me from on high. Remembering an old Devon superstition, I said, ‘Asseyez-vous sur une table et vous ne vous marierez pas cette année.’ (‘Sit on a table and you won’t marry that year.’) She regarded me for a moment with a faintly quickened interest while exploring one of her earholes with the tip of her little finger. Then she abruptly dismissed from her mind whatever she was about to say and questioned me instead about my ‘fréquence de miction’.