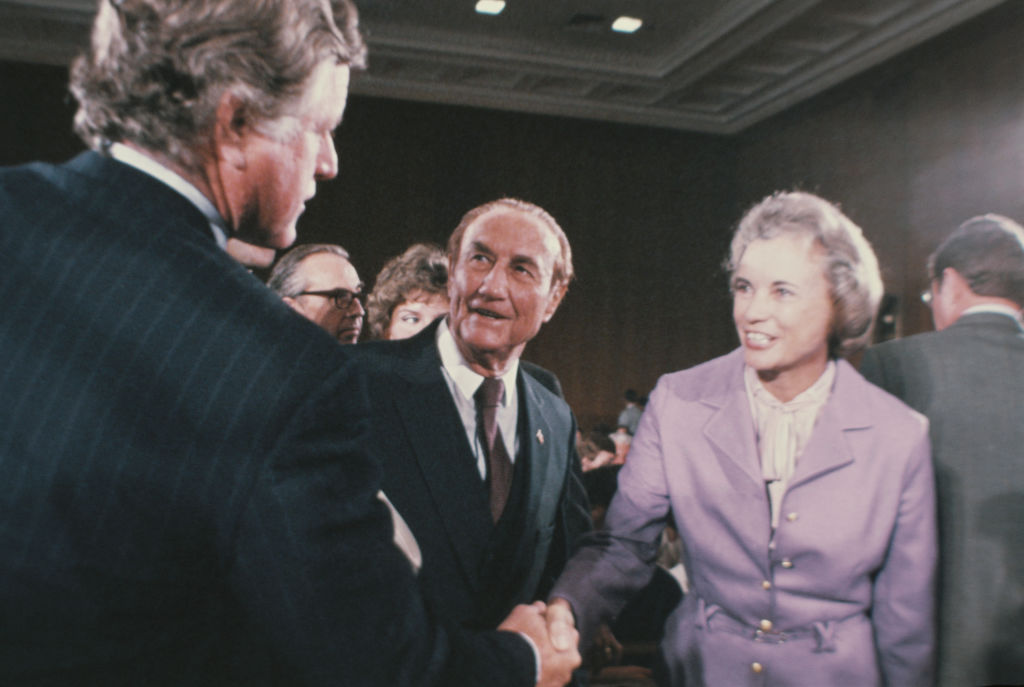 Arizona judge Sandra Day O’Connor is congratulated by Senator Ted Kennedy (1932 – 2009) on her confirmation as Associate Justice of the Supreme Court of the United States before the Senate Judiciary Committee, USA, September 1981. Between them is Strom Thurmond (1902 – 2003), the Chair of the Senate Judiciary Committee. O’Connor is the first woman to serve on the Court. (Photo by Keystone/Hulton Archive/Getty Images)

Batavia, New York
When I toiled in the world’s greatest deliberative body back in those carefree days before 9/11 and COVID-19 had given the state an excuse to try to make Every Man a Caitiff, an old US Senate hand told me a story about the crone who ran a little newsstand perhaps a punted football’s distance from the Russell Senate Office Building.

It seems that the aged proprietress had been the paramour of James Eastland, the law-and-order worshipping, segregation-championing Democratic senator from Mississippi who never met a civil liberties violation he didn’t like. Eastland, chairman...

When I toiled in the world’s greatest deliberative body back in those carefree days before 9/11 and COVID-19 had given the state an excuse to try to make Every Man a Caitiff, an old US Senate hand told me a story about the crone who ran a little newsstand perhaps a punted football’s distance from the Russell Senate Office Building.

It seems that the aged proprietress had been the paramour of James Eastland, the law-and-order worshipping, segregation-championing Democratic senator from Mississippi who never met a civil liberties violation he didn’t like. Eastland, chairman of the Senate Judiciary Committee, was well regarded within the Senate, however, and considered a fair dealer by his colleagues. One of them was Sen. Ted Kennedy, who counted Eastland a friend, no matter their antipodal voting records.

Kennedy, who succeeded Eastland as Judiciary chairman, agreed to look out for Eastland’s mistress after the Mississippian left the Senate in 1978, or so I was told, and her favorably situated newsstand was evidence of Kennedy’s faithful performance as her shield and protector. Sens. Eastland and Kennedy and, I assume, the venerable and venereal vendor are all dead now, and the etiquette of our refined age, when we look down from the heights upon our benighted forebears, demands that we piss on their graves.

I thought of Kennedy’s solicitude for the old seg and his doxy when Joe Biden committed one of the few recognizably human acts of his career. Asserting his talent for ‘bringing people together’, Biden told an audience, ‘I’ve been around so long, I worked with James Eastland. Even in the days when I got there, the Democratic party still had seven or eight old-fashioned segregationists. You’d get up and argue like the devil with them. Then you’d go down and have lunch or dinner together.’ Two flame-out rivals of Biden’s for the Democratic nomination, Sens. Cory Booker and Kamala Harris, both products of privileged professional-class upbringings, emitted gasps of horror. Biden apologized for having behaved like a normal person, and the matter was dropped. (You’d think that Sen. Harris, who got her start in politics as bedmate of Willie Brown when he was Speaker of the California assembly, would appreciate Sen. Eastland’s concern for his concubine.)

In US Senators and their World, his classic scholarly study of life inside the upper chamber, political scientist Donald R. Matthews described the alternative to an institutional ethic of courtesy as ‘chaos’. One senator told him, ‘You discover that political self-preservation dictates at least a semblance of friendship. And then before you know it, you really are friends. It is rather like the friendships that might develop within a band of outlaws. You all hang together or you will hang separately’.

Matthews was writing in the 1950s, but as late as the 1980s, the folkways of the Senate encouraged cross-ideological friendships. A friend of mine wrote speeches for Paul Simon (the progressive Democratic senator from Illinois, not the composer of ‘Feelin’ Groovy’). My pal, who had known Simon for years, asked him who his closest friend in the Senate might be. Ted Kennedy? Paul Wellstone? Some other lion of the left?

Sen. Simon thought about it for a second, then said, ‘Jesse Helms’ — the archconservative and bogeyman extraordinaire to a generation of liberals.

Those days of comity, if not comedy, are gone, or so folks on Capitol Hill tell me.

I acknowledge the case for incivility toward politicians. Men and women who order or officially sanction mass slaughter or the erasure of personal liberties have forfeited any claim to courtesy.

The novelist William Saroyan, an Armenian-American anarchist, pointedly refused to shake FDR’s hand. Dwight Macdonald, the heterodox critic-essayist, showed up at LBJ’s 1965 cattle call for intellectuals, the White House Festival of the Arts, and buttonholed attendees to sign a petition denouncing his host’s foreign policy.

A more recent example is former senator Jim Webb, the fiery working-class Virginia Democrat and the best novel-writing politician since Brand Whitlock. When President George W. Bush asked about Webb’s son, a Marine stationed in Iraq, Webb reportedly said, ‘I’d like to get them out of Iraq, Mr President’. Miffed, Bush said, ‘That’s not what I asked you. How’s your boy?’ To which Webb replied, ‘That’s between me and my boy, Mr President’.

Bush, whose war of choice has resulted in hundreds of thousands of deaths, had his feelings hurt. Saroyan, Macdonald, and Webb were writers, independent intellectuals, and their acts of lèse-majesté were directed at the President of the United States, not their colleagues. Theirs were also acts of conscience, not moral preening or grandstanding.

The solution to all this would be to shrink state power so radically that policy disagreements would be akin to flyweight arguments over the merits of Coke vs Pepsi. Failing that, we might try to love our enemies. I know, it’s been tried before, but maybe we should take another shot?

This article is in The Spectator’s August 2020 US edition.