The lessons I learned cycling across Rwanda

‘There is no ethnicity here now’, said my escort Eric, moments before I shot headfirst over the handlebars 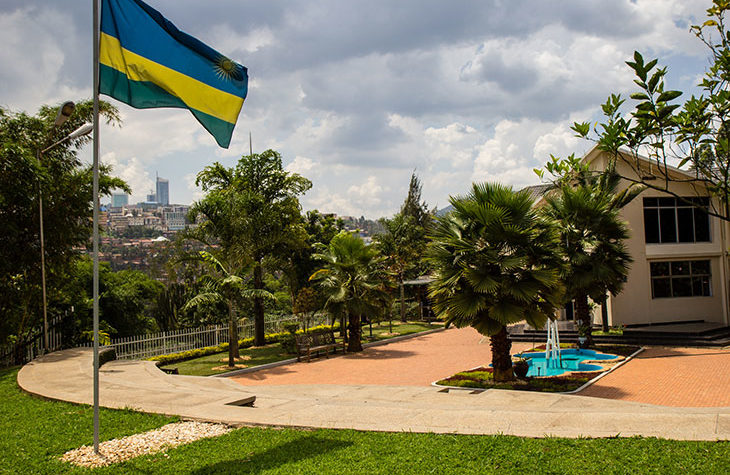 The lessons I learned cycling across Rwanda

The backmarker of the peloton was Eric, a tall, stick-thin Rwandan. Under his cycling helmet he wore a baseball cap with a long peak which give the whole a fashionable Peaky Blinders look. Eric carried the peloton water supply in two rear panniers and it was also his job to ensure that nobody fell so far behind that they got lost. Which basically meant me. Even though I had chosen to ride an electrically assisted bike, I was always last.

We were riding along the base of a chain of volcanos in the north-west of the...

The backmarker of the peloton was Eric, a tall, stick-thin Rwandan. Under his cycling helmet he wore a baseball cap with a long peak which give the whole a fashionable Peaky Blinders look. Eric carried the peloton water supply in two rear panniers and it was also his job to ensure that nobody fell so far behind that they got lost. Which basically meant me. Even though I had chosen to ride an electrically assisted bike, I was always last.

We were riding along the base of a chain of volcanos in the north-west of the country on undulating but relatively smooth black cinder roads. The fertile countryside was densely populated with rural poor who rushed to the side of the road to witness our passing spectacle and shout greetings, or laugh, or to silently contemplate the stark difference between the lives of those bombing through on two and a half-grand bikes for the fun of it, and their own stationary shell-shocked poverty.

But I was learning. I was learning above all that the thick, almost tractor-like tires of my bike could absorb the shock of much larger stones than I had originally thought possible. Also that if I stood up on the pedals when riding over large stones, it didn’t hurt. Having learned this, I no longer had to concentrate as intently on the road surface as before and I could survey the dramatic scenery and even engage Eric in conversation.

Before setting off, we had visited the Genocide Memorial museum in the capital, Kigali. The magnitude of the Rwandan genocide was brought home to me by an exchange overheard between our museum guide and the member of our cycling party who asked the most questions. The guide had said 84,000 corpses had been unearthed last year alone, mainly by construction work. ‘What, in Rwanda?’ said our inquisitor-in-chief. ‘No. In Kigali,’ said the guide. Since then I had found the subject of the Rwandan genocide difficult to dismiss sufficiently from my mind to focus on the usual, more trivial matters.

‘So Eric. You are a Tutsi, right?’ I said as we freewheeled down a relatively smooth section of cinder track. ‘There is no ethnicity here in Rwanda now. We are all Rwandan.’ ‘No ethnicity and no plastic bags,’ I said. Alive to the slightest suggestion of humor, Eric laughed at the juxtaposition. ‘Correct,’ he said.

‘What about before?’ I said. (In Rwanda everything is either ‘before’ or ‘after’.) ’Before it was never clear-cut,’ he said. ‘Being Tutsi or Hutu was about status rather than ethnicity. A Hutu could acquire cows and become Tutsi, then lose them and become Hutu again. They were socioeconomic labels.’

This was the line that the Genocide Memorial museum guide — tall, stick-thin — had taken. He himself had lost half a dozen family members in 1994, including all four grandparents. Eric, too, had lost uncles and aunts. So who was I to question anything he or Eric said about anything. Moreover I was once the best of friends with a proud Ndebele man who told me that his father had emigrated to Zimbabwe from Mozambique and adopted the warrior Ndebele identity as one might choose to support Millwall as a football team. African tribalism is complicated. That much I knew. And yet. But Eric preferred not to elaborate on the official position, perhaps because it was against the law of his country, quite understandably, to speak in terms of Hutu and Tutsi, and Rwandans are known for their obedience to authority.

Then we were toiling up a steep hill and further discussion about the thorny question of race vs class was completely out of the question. Also, slowed by the uphill gradient, we were obliged to engage breathlessly with the platoons of ragged toddlers who had rushed to the roadside to wish the muzungus good morning.

To say ‘how are you?’ one says ‘amakuru?’ To which the answer is ‘ni meza’ — ‘I’m fine’. Not wanting to be thought rude as well as science-fiction wealthy, I diligently greeted or responded to young and old, sour and beaming, with these phrases. I could never get the word amakuru installed into my thick head and so wrote it on a postcard and carried it in a breast pocket and whipped it out to read out to them if the damned word had escaped me again.

It was while juggling postcard, bike, politeness, and a wet and slippery tree trunk serving as a bridge across a culvert that I went over the handlebars and headfirst into the gully, the bike following. While flying through the air I heard Eric say, in English, ‘Oh my God!’. After that I ditched the postcard and stuck to French or Swahili greetings, which to my surprise I found to be perfectly valid currencies of basic courtesy among the volcanos of northwestern Rwanda.