In Ottawa, where junkies and technocrats collide 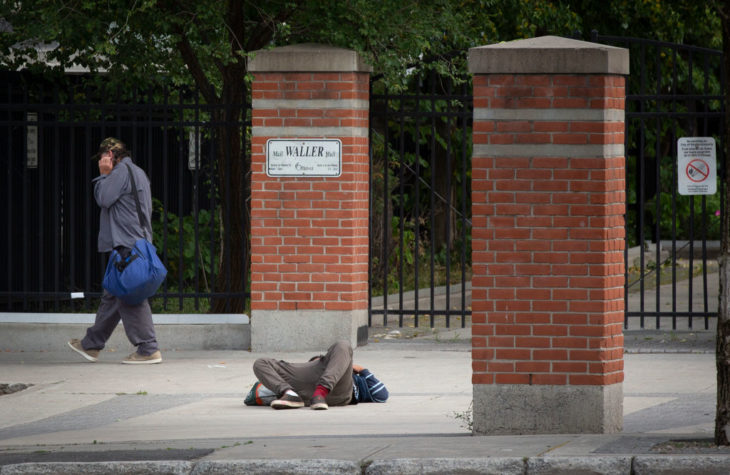 A pedestrian walks past a person that used drugs in Ottawa, Ontario, on June 25, 2020. (Photo by LARS HAGBERG/AFP via Getty Images) 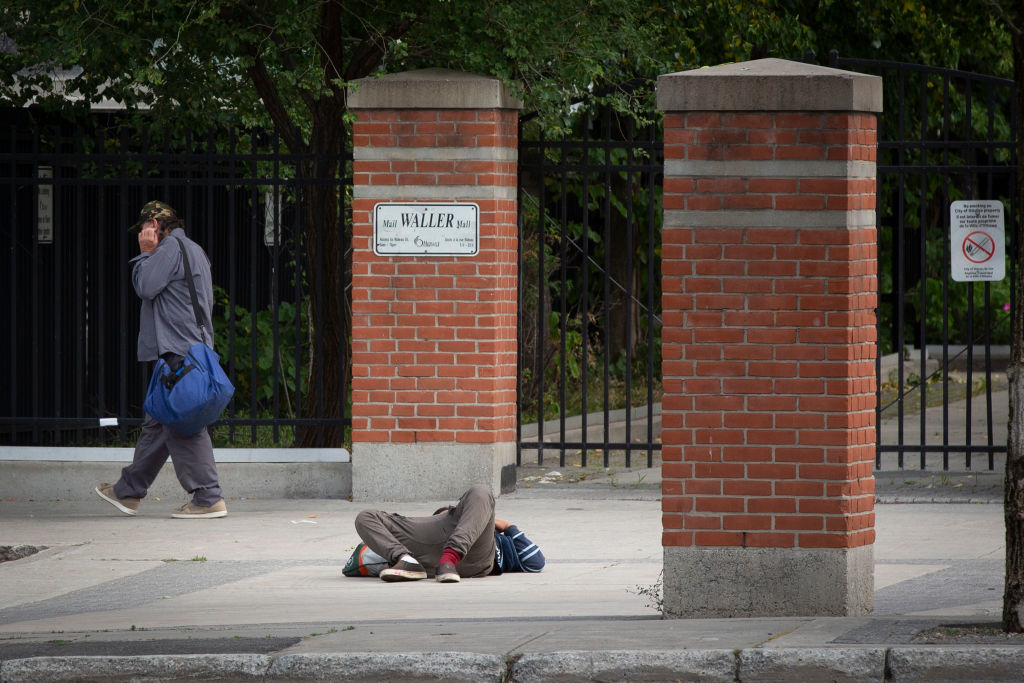 In Ottawa, where junkies and technocrats collide

I got out of the taxi in front of my hotel in lower town Ottawa and was immediately accosted by a homeless junkie looking for a donation to the cause. It was a Sunday evening, well after sunset, and not quite the greeting I had hoped for upon arrival in Canada’s leafy capital. The smell of pot was in the air, a lot of it — there was a cannabis store across the street, and another around the corner.

After checking in and dropping off my bags, I went in search of a late dinner. A...

I got out of the taxi in front of my hotel in lower town Ottawa and was immediately accosted by a homeless junkie looking for a donation to the cause. It was a Sunday evening, well after sunset, and not quite the greeting I had hoped for upon arrival in Canada’s leafy capital. The smell of pot was in the air, a lot of it — there was a cannabis store across the street, and another around the corner.

After checking in and dropping off my bags, I went in search of a late dinner. A two-block journey to a trendy tap house with a wide selection of craft beers witnessed another half-dozen, very animated homeless people. One, eyes closed, was dancing in the middle of the sidewalk, his arms flailing in the air, oblivious to everyone and everything around him (mind the lamppost!). A disheveled woman menacingly approached me with what looked like a police baton and shouted some colorful language to express her distaste for me and my kind.

Hurrying into the bar, which prominently featured the most updated pride flag on the door, I felt transported to any neighborhood watering hole in America’s most gentrified urban neighborhoods — Hell’s Kitchen in New York City or U Street in Washington. Twenty-something hipsters in flannel munched on poutine with “organic smoked meat,” and a group of a dozen women at a long table laughed while sipping rosé and luxury cocktails. 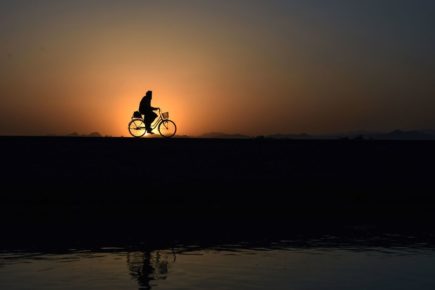 October is a beautiful time to visit Ontario, and certainly Ottawa. The trees are blushing deep yellows, oranges and crimsons. The views from Major’s Hill Park present Parliament Hill in all of its neo-gothic splendor. The vista from various perches atop Parliament Hill across the Ottawa River into heavily forested southern Quebec are equally arresting. Downtown Ottawa seems to offer endless inspiring architectural achievements: the Royal Canadian Mint, the Office of the Prime Minister, the Fairmont Château Laurier, Notre Dame Basilica Cathedral, and the Canadian Museum of Nature, just to name a few.

Ottawa possesses a UNESCO World Heritage site: the Rideau Canal, built in the early 19th century when Great Britain and the United States competed for control of the Great Lakes Basin. It was designed for steam-powered vessels, and, according to UNESCO, “is the best-preserved example of a slackwater canal in North America, demonstrating the use of this European technology on a large scale.” One thousand hearty canal workers died during its construction, mostly from disease, and principally from complications stemming from malaria.

You can get a look at the opening of the canal strolling through Major’s Hill Park, once the official residence of Lieutenant-Colonel John By, superintending engineer of the remarkable project. I stopped there one evening at dusk to snap a photo of Canada’s parliamentary buildings. I was quickly interrupted by a homeless man I had not noticed who was lying behind a stone marker which was partially in view of my iPhone.

“Relax, buddy, I’m not taking a photo of you,” I retorted, looking around nervously. Passersby seemed oblivious to our exchange.

I pointed with admiration at his parliament. “That. It’s impressive.”

He seemed confused, uninterested, perhaps already distracted by something else. He picked up his stuff and wandered off, cursing under his breath.

I asked a number of Ottawa residents about the significant size of the homeless population in their city. My interlocutors would inevitably shake their heads with grave solemnity. They all had their own stories to tell, whether witnessing people openly using needles on the street or purposefully avoiding crazed individuals on city sidewalks. In January 2020, the Ottawa City Council, I learned, unanimously declared homelessness an emergency. “In 2019 alone, over 8,000 people were in emergency shelters,” notes one local website.

The pandemic exacerbated the homeless crisis in Ottawa, according to local and national media, which have reported on the lack of sufficient mental health services in the capital. Perhaps something about long-term enforced lockdowns in a city of almost a million? One of my cab drivers told me that Ottawa liquor stores remained open and easily accessible throughout the pandemic, something the Canadian Centre on Substance Abuse and Addiction warned would likely aggravate alcoholism (later data proved that it did). Canadian authorities are also widely pursuing a policy of not enforcing their own drug laws (or even decriminalizing hard drugs). Substance abuse, little surprise, is on the rise across Canada.

These problems are of course not unique to Ottawa or Canada (just ask Michael Shellenberger, author of San Fransicko: Why Progressives Ruin Cities). But what struck me about Ottawa was the dramatic juxtaposition of a homeless junkie population with the city’s Bobo bureaucratic class. Every morning, Canadian technocrats carry their custom-made cappuccinos as they shuffle by unstable drug addicts. Every night, those same technocrats enjoy an enviable diversity of international cuisine while homeless people visible through restaurant windows debate and scream at inanimate or imagined objects — I saw this several times in just a couple days.

I confess I didn’t feel much like laughing at that. Nor, I’d imagine, would the thousands who almost two centuries ago labored to build Canada’s once proud capital city. Not that Canada’s professional class would care much what their ancestors thought — that past, they’ve come to believe, is a shameful one, defined most saliently by the displacement and marginalization of its indigenous population. Though frankly, I think it’s more shameful that many Canadians are focusing their attention on “land acknowledgements” and contrived scandals aimed at further denigrating the memory of the colonialist boogeyman.

Sadly, it’s not just half-baked Canadian hobos in public parks who find their cultural and political inheritance uninspiring and irrelevant.