French women do get fat

The effortlessly stick-thin Parisienne is a mythical creature 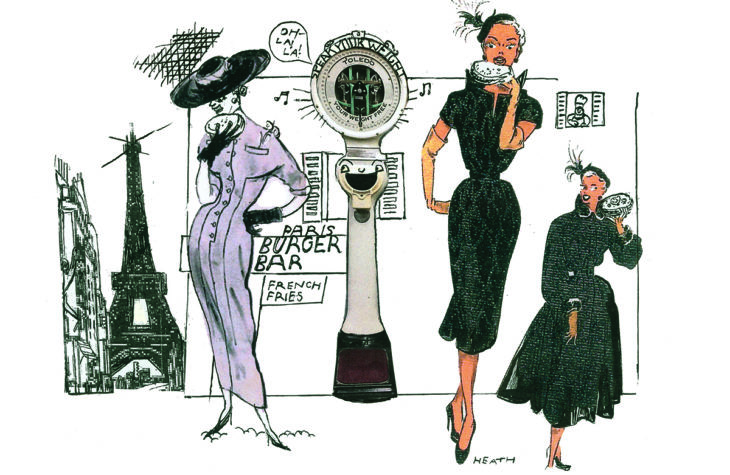 French women do get fat

This article is in The Spectator’s January 2020 US edition. Subscribe here.Paris
‘And please meet Alice, who has brought industrial cheese,’ said our Parisian host as she introduced me to the other dinner guests. Imagine my despair! I had failed her, not to mention her guests, on the sacrosanct fromage. A fate worse than death.

Food is a national obsession for the French. The couple throwing the party presented us with a three-course meal, all made from scratch using seasonal produce from the local market. To think that I almost brought a six-pack of beer.

‘And please meet Alice, who has brought industrial cheese,’ said our Parisian host as she introduced me to the other dinner guests. Imagine my despair! I had failed her, not to mention her guests, on the sacrosanct fromage. A fate worse than death.

Food is a national obsession for the French. The couple throwing the party presented us with a three-course meal, all made from scratch using seasonal produce from the local market. To think that I almost brought a six-pack of beer.

The world — especially its English-speaking parts — is fascinated by how the French eat and, in particular, how French women can seemingly devour whatever they like while remaining toothpick-thin. There is an ample stack of French diet books aimed at Anglo- Saxon women, such as Mireille Guiliano’s French Women Don’t Get Fat and Dr Jean-Michel Cohen’s The Parisian Diet. The big ‘secret’ is that Parisiennes don’t forbid themselves anything, but eat small portions slowly, taking time to appreciate their food. The fashion press calls this ‘eating with your five senses’.

In cinema or fashion, the image of the Parisienne is of an elongated figure dreamily dipping a croissant into a café crème, thoughtfully breaking off the tip of her baguette or wafting through a farmer’s market. She calls the local fishmonger by his first name (bien évidemment), knows how to whip up a bœuf bourguignon — and, should she be in a hurry, she’ll gracefully settle for a slice of fresh bread and (non-industrial) cheese. Her thoughtful eating is the foundation of her knowledge and sophistication.

How much of this is true? In France, meals tend to be served religiously three times a day at fixed hours and are shared with the whole family. Most offices provide their employees with meal vouchers and allow them a full hour for lunch (an hour and a half if you are lucky). Lunch frequently involves a glass of wine. Carbs are served with every meal.

This is not a diet to keep you as slim as the mythical Parisienne. Despite their carefully curated insouciance, French women strategize and watch their weight in secret. Fries and bread are consumed in toddler-sized portions. Apéritifs dînatoires (‘dining drinks’) often replace dinner: a handful of peanuts, a slice of cheese and plenty of cigarettes — a popular way to cut one’s appetite, and also très sexy.

To every occasion, a tactic. A French colleague told me that she ‘prepared’ for heavier meals with her boyfriend by barely eating on the day of the meal itself and abstaining the next day too. Asked about her diet, first lady Brigitte Macron said she never finishes her glass of wine.

In France, strict etiquette surrounds food. In upper-class circles it is rude to say ‘bon appétit’ because one shouldn’t eat out of hunger but for pleasure. Champagne glasses are held by the stem, in order to look elegant and also avoid the contents warming up too fast. The rules are dictated by a privileged minority who look down on those who eat out of necessity rather than for pleasure.

The idealized French woman is therefore someone who is wealthy, upper-class and white. She eats — and doesn’t eat — when she pleases. But most French women do not fit into this category and are tired of being portrayed as stick-thin gourmets. Many can’t get through the day on minuscule portions. A recent study found that 38 percent of the population snack between meals — something traditionally frowned upon.

Alice Litscher, a born-and-bred Parisienne, wears medium-sized clothes but says she grew up feeling fat. ‘Food was always treated as a devious source of temptation, something I should be treating as fuel rather than a form of pleasure,’ she says, in stark contradiction of the fantasies perpetuated about how French women eat. She was encouraged to secretly count all her calories, and Gallic men would also keep an eye on what she was eating: ‘I remember being scolded by a waiter for ordering a second serving of chips. “It’ll end up on your hips, mademoiselle,” he said.’

Gabrielle Deydier, a French writer and body-positivity activist, has heard the most brutal comments from strangers for being curvy: ‘People sneer when I order two croissants at the bakery. I am called nicknames and pointed at by strangers in the street or at the supermarket. Being fat is treated like a personal fault, a mistake and never accepted as a different body type.’ Deydier says that her weight is treated like a sin, a form of carelessness. Strangers therefore feel entitled to comment.

The truth — which the French would rather not acknowledge — is that French women do get fat. But being overweight is still considered a faux pas, like bringing the wrong cheese to dinner.