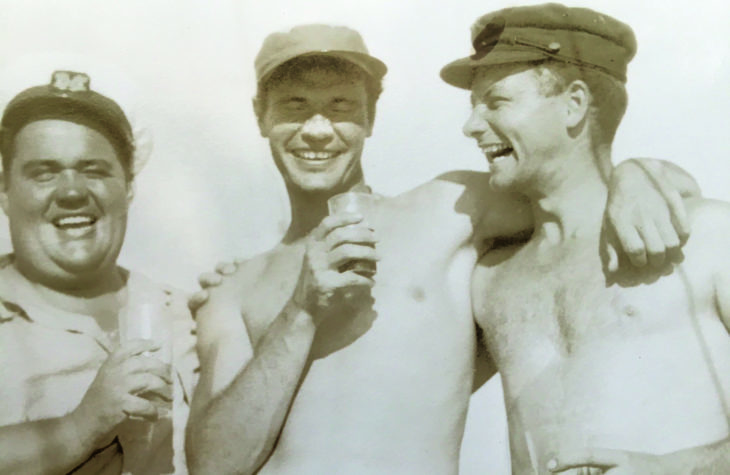 Captain Joe Oliver and Bob (right) celebrating with crew member ‘the catch of the day’, Provincetown, 1933 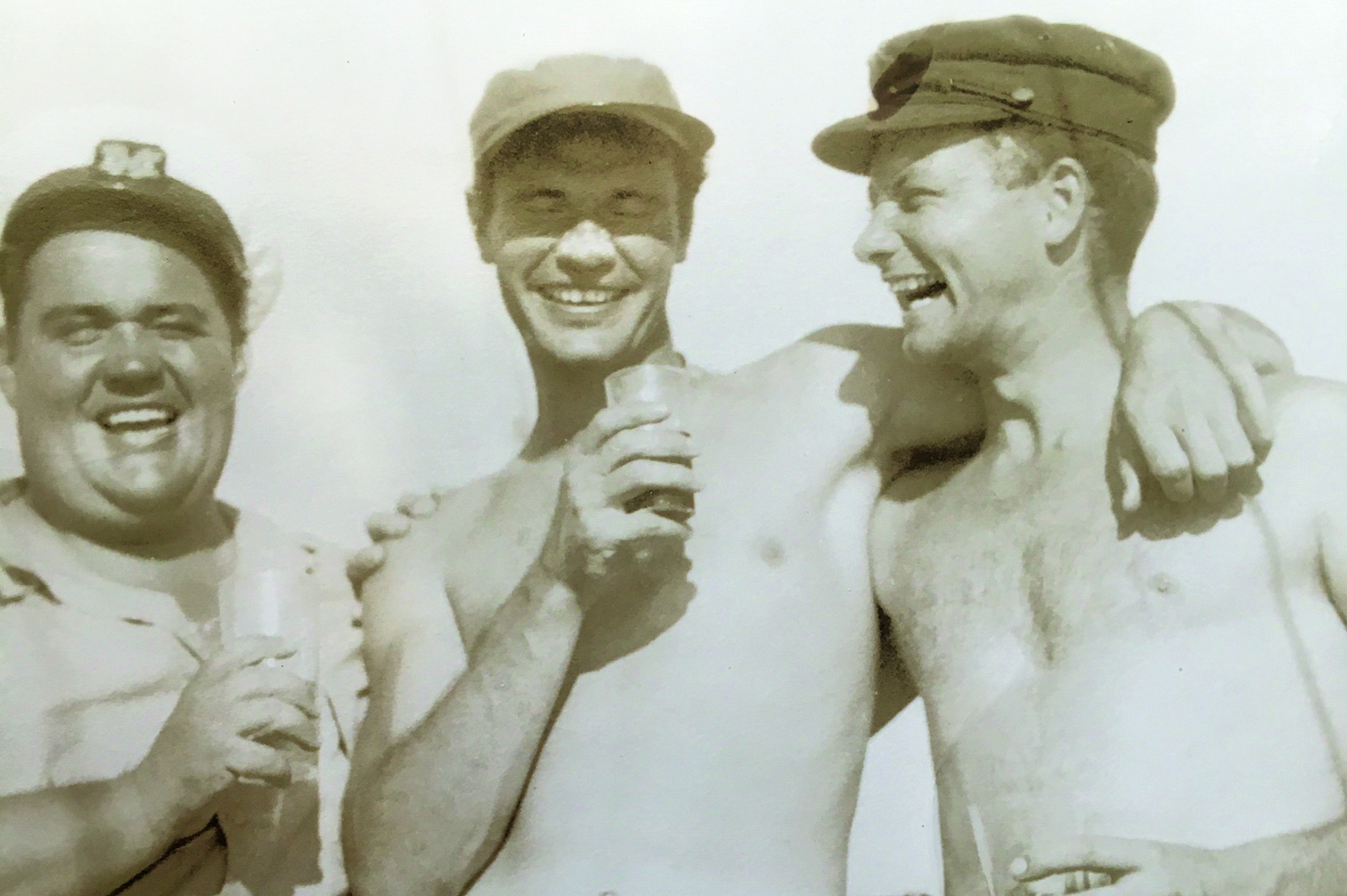 Cape Cod winters are brutal: they are long, freezing cold and windy. Cape Codders don’t know what spring is. The Pilgrims, having first touched terra firma in Chatham after months at sea, headed across Massachusetts Bay for Plymouth to more shelter. Days jump from those when Cape Codders think that Old Man Winter has played a nasty trick on them once again, to days of suddenly delicious warm sun which breaks through feathery skies, filled with what my father Bob called ‘unused air’.

One of my dearest memories of spending a winter living in Chatham’s Old...

Cape Cod winters are brutal: they are long, freezing cold and windy. Cape Codders don’t know what spring is. The Pilgrims, having first touched terra firma in Chatham after months at sea, headed across Massachusetts Bay for Plymouth to more shelter. Days jump from those when Cape Codders think that Old Man Winter has played a nasty trick on them once again, to days of suddenly delicious warm sun which breaks through feathery skies, filled with what my father Bob called ‘unused air’.

One of my dearest memories of spending a winter living in Chatham’s Old Village is of my father, Bob, in mid-May, appearing in his 10-foot skiff putt-putting out of the Mill Pond past our house, wearing his salt-laden floppy hat, heading for Stage Harbor to do some clamming. That night we would have clam chowder, or as native Cape Codders would say, ‘chowdah’.

My father was not a native. Born in Detroit, he had spent youthful summers on the Upper Peninsula of Michigan and as a teenager would go west for six weeks with his father Ezra, a successful realtor, and Ezra Junior, his elder brother by two years. My grandfather was a keen fisherman and hunter. He wanted to instill in his sons the joys of backpacking in the wild West, cooking what they caught, shot or picked.

The father and sons, tired, sunburned and dirty after the six weeks, would finish up the summer adventure at Brown’s Hotel in Denver for a few days and nights of high pampering before the boys went back to the Hill School in Pottstown, Pennsylvania. My grandfather understood the value of living off the land, and also the value of land when you’re living in a world of privilege. He wanted his boys to experience both uniquely American worlds.

His theory on upbringing paid off. My uncle Ezra became a successful insurance broker in Buffalo, Wyoming, got his pilot’s license and sold policies to isolated sheep and cattle ranchers in the wilds of Wyoming, Montana and Colorado. My father, who graduated from the Hill School in June 1929, entered Yale to study architecture. But in early October his father told him he couldn’t afford the $300 yearly tuition, having lost in the Crash his real estate fortune, which was mostly invested in Florida.

My father took the train from New Haven to Manhattan and enrolled in the Art Students League at night, which his father could afford. During the day, he sorted mail in a fledgling advertising agency. In 1931 he put his easel and paints in the rumble seat of a borrowed Model A and headed for Charles Hawthorne’s school of art in Provincetown, Massachusetts, where for three years he studied painting during the day. At night, he worked as a bartender. When dawn came, he worked with a Portuguese fishing crew and would haul nets laid the previous day. Joe Oliver, the captain of the fishing boat, took a shine to my father and taught him how and where to dig for clams at low tide and then how to make New England clam chowdah.

My children were given lessons on clam identification by their grandfather: there are quahogs (the size of a fist and cheapest) cherrystones (less than three inches) and littlenecks. Cherrystones are sweeter and more tender than quahogs; they average between three and five per pound. Littlenecks, the smallest hard-shell clam, also known for being sweet, are 10 to 12 clams in a pound. They measure about one to two inches across and are the more expensive of the two types. They are usually served on the half-shell with cocktail sauce and lemon juice.

Chatham friends and family would often join my parents on Sunday nights for my father’s rib-sticking chowder, a luscious concoction of bacon, potatoes and chopped clams. Anyone who was interested in learning how to make real clam chowder was welcome to observe the chef making Joe Oliver’s original recipe from those long-gone days in Provincetown. I can hear my father now reminiscing as he chops ingredients, denouncing Manhattan clam chowder, which is made with tomatoes: ‘It’s heresy — not chowdah! It’s vegetable stew!’

In a Dutch oven or large pot over medium heat, add bacon and cook until crisp, about five minutes. Remove bacon from pot, drain on paper towels and crumble. Set aside. To the bacon fat, add onion and celery and cook until softened, about five minutes. Stir in garlic and thyme until fragrant, about 30 seconds. Stir in potatoes, and bouillon cube dissolved in boiling water. Bring to boil, reduce heat and simmer uncovered until potatoes are tender, about 15 to 20 minutes.

In a small bowl, whisk together 1 cup half-and-half or evaporated milk and flour until smooth. Gradually stir into soup, return to a simmer and cook until thickened, about one to two minutes longer. Season to taste with salt and pepper (I like one teaspoon salt and ½ teaspoon pepper).

Add clams and their juice and remaining one cup half-and-half or evaporated milk and stir until heated through, about 1 minute. Garnish each serving with bacon and oyster crackers.

Potatoes: waxy potatoes like baby red potatoes, or semi-waxy like Yukon Golds, hold their shape in this soup.

Canned chopped clams: if you like it extra clammy, double up on the clams.

Make it your own: add diced carrots with the potatoes. Or stir in a bay leaf or some fresh herbs like parsley. A drizzle of sherry on top is traditional for seafood soups and chowders.

Too hot: like all creamy soups and stews, the soup could scorch if cooked at too high a temperature.

Storage: leftover clam chowder will keep in the refrigerator for up to four days.