The glory that was the Low Countries, the disaster that is the European Union 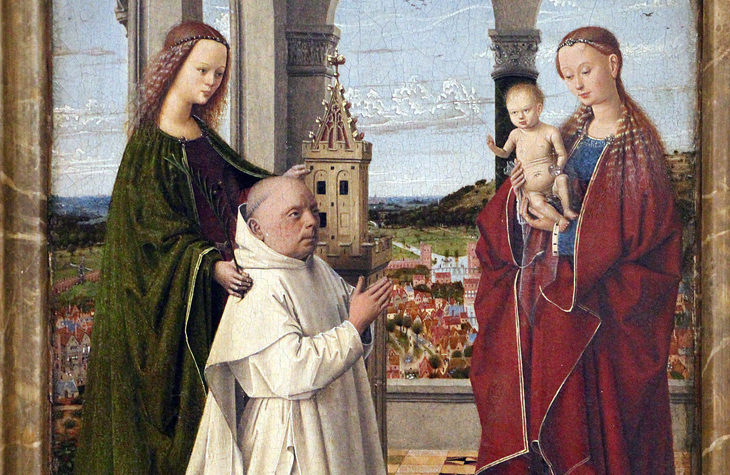 The glory that was the Low Countries, the disaster that is the European Union

In 1983, ten European heads of state, signing the Solemn Declaration on European Union, declared a goal of ‘ever closer union’ — something Belgium, in its role as home-nation to the EU, has been abetting ever since, but which the democratic publics of the EU’s constituent nations keep blocking at the ballot box. Since 1954, visitors to the Frick Collection have been attempting an ever closer union with the Flemish master Jan van Eyck’s Virgin and Child, with Saints and Donor (c. 1441–43), but have been blocked by a forbidding console table, which guards and obscures...

In 1983, ten European heads of state, signing the Solemn Declaration on European Union, declared a goal of ‘ever closer union’ — something Belgium, in its role as home-nation to the EU, has been abetting ever since, but which the democratic publics of the EU’s constituent nations keep blocking at the ballot box. Since 1954, visitors to the Frick Collection have been attempting an ever closer union with the Flemish master Jan van Eyck’s Virgin and Child, with Saints and Donor (c. 1441–43), but have been blocked by a forbidding console table, which guards and obscures van Eyck’s work in the Boucher ante-room.

Europe’s ‘ever closer union’ has been a disaster for democracy. But the proximity granted to the Frick Virgin and Child by its move to the Cabinet Gallery, for its new exhibition, The Charterhouse of Bruges: Jan van Eyck, Petrus Christus, and Jan Vos, is a popular triumph. And whereas a closer look into the innards of the European Union yields only dyspepsia, a closer look at the details of van Eyck’s painting, and the other artworks on display here, is pure ambrosia. Jean-Claude Juncker, the EU panjandrum who is said to enjoy a restorative glass, should take note.

What’s more, the Frick has taken the extraordinary step of providing magnifying glasses so that visitors may get closer to the nine worthy objects shown here. Seeing a van Eyck in the flesh is a rare enough occurrence. Only 20 paintings with sure attributions survive and they’re scattered: not just in the Belgian cities of Ghent, Bruges, and Brussels — as expected for a man from nearby Liège — but also Washington, Dresden, Berlin, Paris. London has two of the best: the so-called ‘Arnolfini Wedding’ portrait (1434) and an alleged self-portrait. New York has two of lesser repute: a c. 1440–41 ‘Crucifixion/Last Judgement’ diptych at the Met and the Frick ‘Virgin’.

The Frick’s work has been catalogued as by the hand of ‘Jan van Eyck and Workshop’, but as the curator of the Charterhouse exhibition, Emma Capron, said to me, van Eyck’s workshop was notably skilled, arguably the best in the world. It shows. The extent to which van Eyck himself participated in the painting remains uncertain. The two dominant scholars of early Netherlandish art in the 20th century, Max J. Friedländer and Erwin Panofsky — whose prodigious and fanciful iconological reading of the ‘Arnolfini Wedding’ will be familiar to anyone who took an undergraduate history of art survey — held opposing views of the extent of the master’s hand. Friedländer granted that the painting was not van Eyck’s finest, the ‘spontaneity and enchantment’ having been allowed to ‘congeal ever so slightly into routine’, but it was still his. Panofsky thought the work was compositionally van Eyck’s, with the details filled in by his most promising pupil, Petrus Christus, who receives second billing in the Frick’s exhibition title.

With such a remarkable object, does it matter whose hand laid the final brushstrokes? Regardless of who painted the principal figures or the details of the Frick ‘Virgin’, the object justifies the magnifying glasses. How else could you perceive the classical bronze sculpture of Mars, imprisoned in a three-windowed tower that identifies Saint Barbara, as she clasps the shoulder of Jan Vos, the kneeling monk who commissioned the painting? Or the red-turbaned man hiding in the bushes behind Vos? Or the horseman at far left out for a stroll in his pinks?

One doesn’t have to be a Panofskian iconologist to revel in the details of the work. But what of the greater composition, that which is supposedly van Eyck’s sole contribution to the work? In many ways, it’s a familiar van Eyck setting. Our figures are in an arcaded loggia, a generic city- and country-scape behind. The central actor is a draped Mary, standing on a patterned carpet under an intricately brocaded baldachin with lilies whose stems bear the abbreviation of the Ave Maria prayer. She holds a characteristic van Eyck Christ child, nude, his right hand in a blessing, his left holding a jeweled orb. St Elizabeth stands on the right, holding her three crowns, meeting the gaze of the supplicant Carthusian. So far, so van Eyck.

But 20th century viewers were aware that something was off. The drapery, for which van Eyck is justly famous, is blockily rendered; light is not used in revelatory fashion, as it is in the National Gallery’s ‘Annunciation’ (c. 1434/36). Even when Helen Clay Frick, the daughter of the Frick’s steel baron founder, acquired the painting in 1954, she noted, after Panofsky, that it was a ‘beautiful and important painting by Jan van Eyck and his pupil Petrus Christus’. The existence of a later, exceedingly similar painting by Christus, now known as the ‘Exeter Madonna’ (c. 1450), seemed to confirm that it was Christus who had filled in the details of van Eyck’s original composition.The Frick invites us to consider that possibility by bringing together the ‘Exeter Madonna’ and its own ‘Virgin’ for only the second time, the former on loan from the Gemäldegalerie in Berlin.

The side-by-side hanging is a head fake, a deliberate misdirection. As new research by Maryan W. Ainsworth has shown, Christus couldn’t have been the assistant in van Eyck’s workshop who completed the Frick Virgin, because he wasn’t there. Christus only arrived in Bruges three years after van Eyck’s death, three years after the painting’s consecration at the Genadedal Charterhouse, where Jan Vos was the prior. The existence of the ‘Exeter Madonna’, bearing Jan Vos and Saint Barbara, the Virgin and child (but not Saint Elizabeth), is not proof that Christus had treated the subject before: it’s proof that the man who commissioned both paintings had merely given him a similar brief.

And Christus did his homework, not merely transcribing the Frick ‘Virgin’, but also seeking out other van Eyck commissions as sources. The now-lost ‘Madonna of Nicolas van Maelbeke’ (early 1440s), after which Christus made two silverpoint drawings, one of which is on view at the Frick, provided him with clues toward how to render Mary’s demure, receding face and how to situate her in a turned position — an improvement over the frontal one accorded Mary by van Eyck in the Frick picture. Viewing the ‘Exeter Madonna’ next to the Frick ‘Virgin’ shows Christus to be not merely a follower of van Eyck, but, in some cases, a refiner. 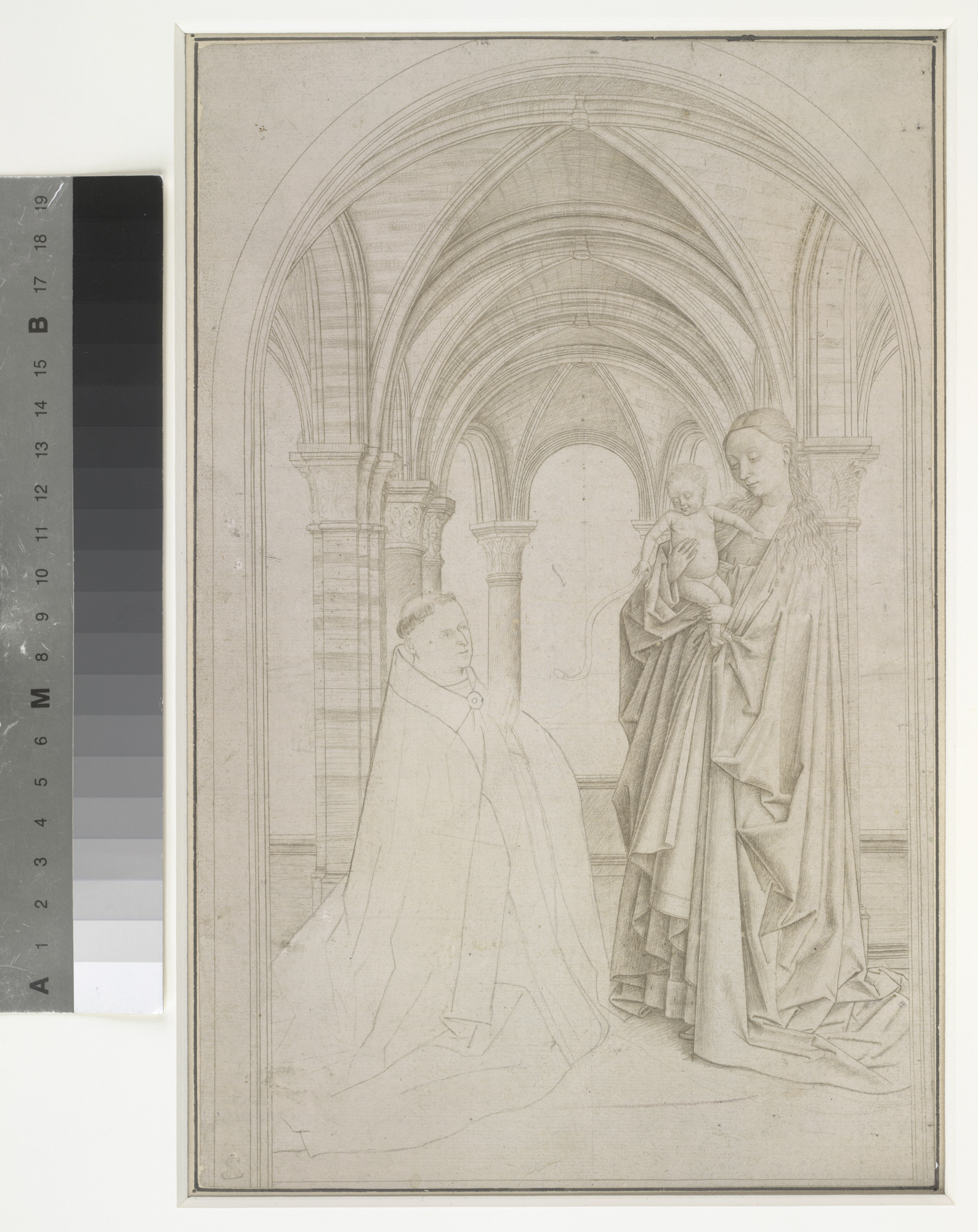 Rounding out the exhibition are a van Eyck workshop ‘Virgin and Child’ (c. 1440), which mostly attests to the skill found in that atelier; and a set of objects that convey the devotional practices of medieval Carthusian monasteries. There is a Petrus Christus portrait of a Carthusian lay brother (c. 1446), perhaps commissioned as a remembrance by the family of the man who has chosen life on the inside. A relief panel in pipe clay shows the importance of Marian devotion in the Charterhouse and two marble sculptures of kneeling monks give us the ur-image of devoted monasticism. They would make particularly good bookends. 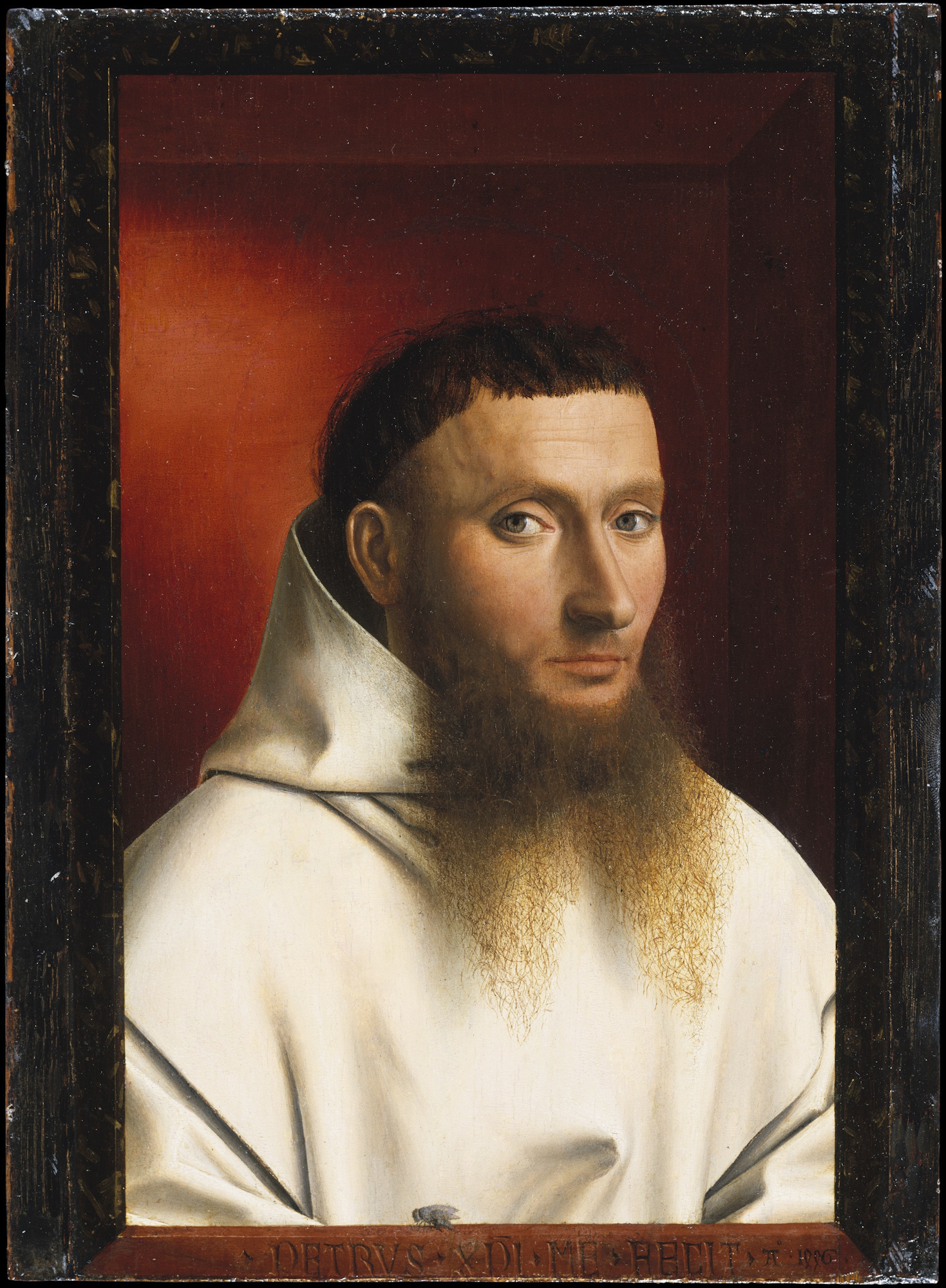 A Carthusian laybrother by Petrus Christus 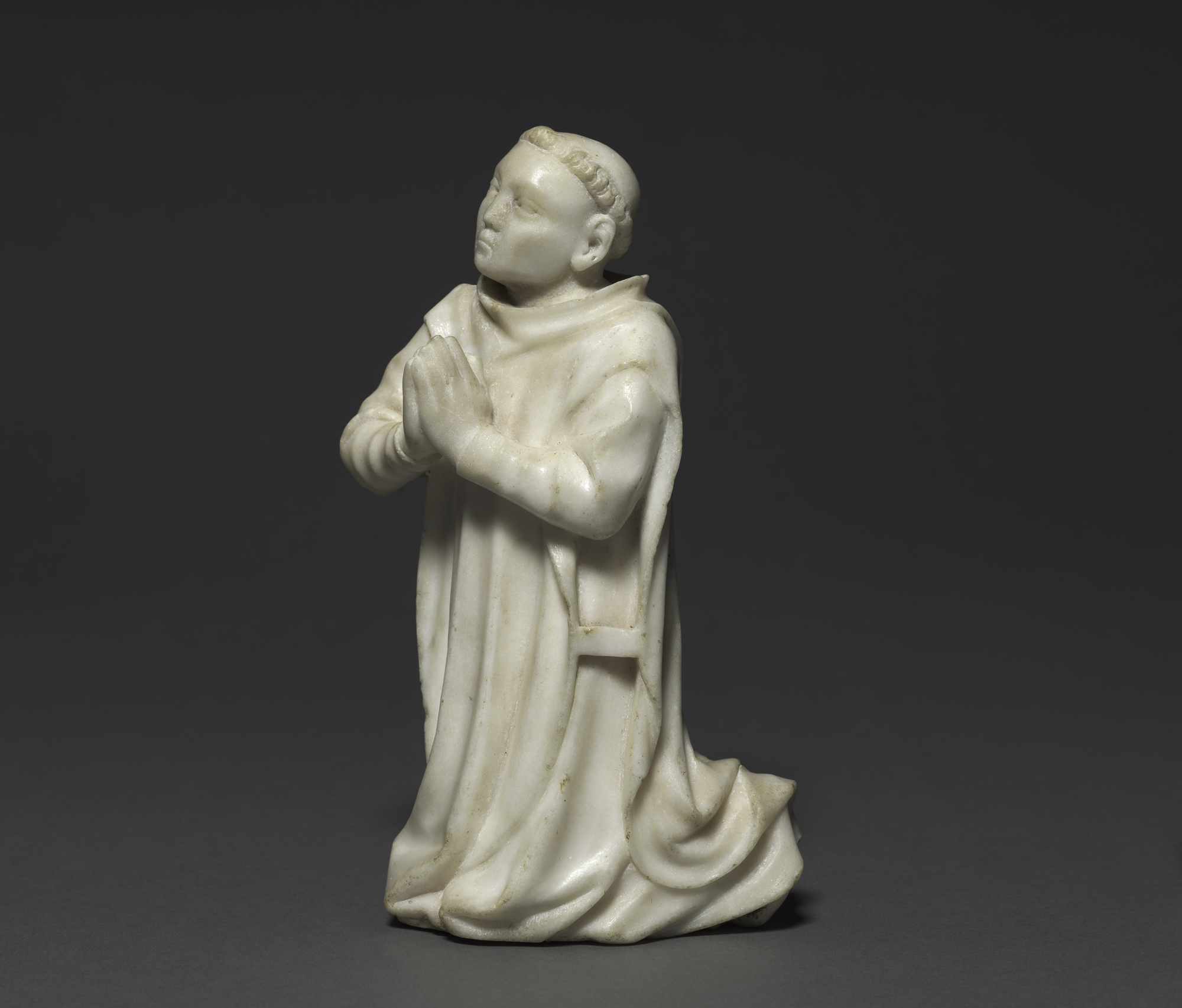 A 14th-century songbook from Vos’s monastery is here to show the stylistic progression of religious objects in a mere century, but I couldn’t stop looking at the jokey jousting match, presided over by a hare blowing a horn, that some wag had doodled at bottom. A delicately carved prayer nut, a sort of hinged rosary, manages to tell the story of the founding of the Carthusian order in a mere two inches of diameter. 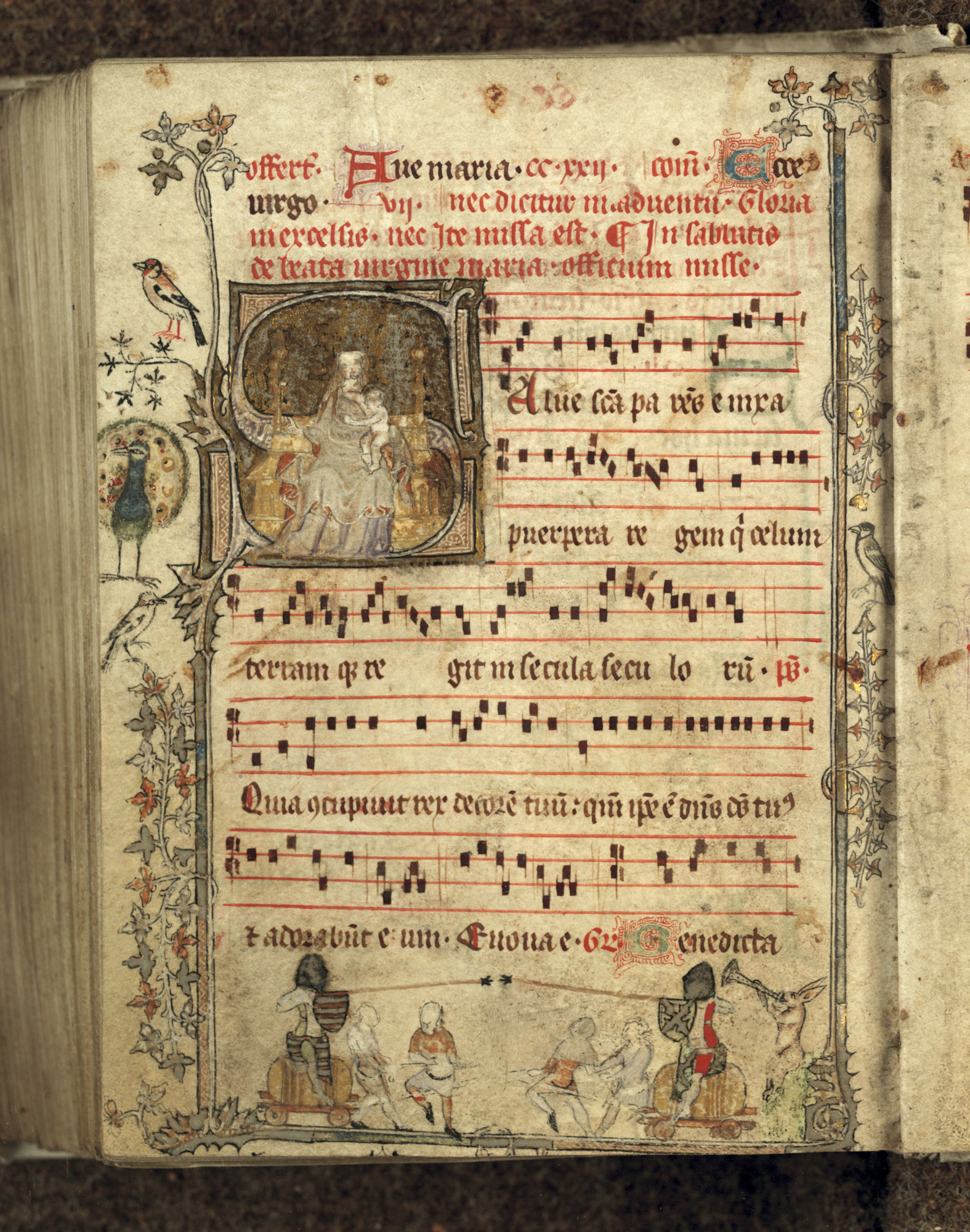 Unlike some things that come out of Belgium, these objects repay close study. The Frick has managed to turn nine small works of art into a delightful afternoon in a Belgian monastery. I wouldn’t want to stay the night, the solitary nature of the Carthusian order being too much for this modern man to bear. But a few hours in The Charterhouse of Bruges is almost enough to make one forget all about the European Union.

The Charterhouse of Bruges: Jan van Eyck, Petrus Christus, and Jan Vos opened at the Frick Collection, New York on 18 September 2018 and remains on view through 13 January 2019.

Benjamin Riley is associate editor of The New Criterion.