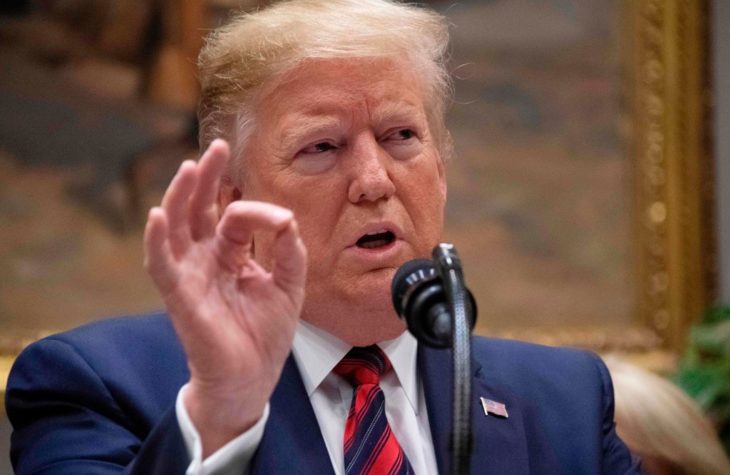 US President Donald Trump (C) speaks during event on ending surprise medical billing at the White House in Washington, DC, on May 9, 2019. – Trump said Thursday he received a “beautiful letter” from his Chinese counterpart Xi Jinping and there is still a chance to salvage trade negotiations to resolve a year-long dispute. (Photo by Jim WATSON / AFP) (Photo credit should read JIM WATSON/AFP/Getty Images)

Donald Trump is Satan. The Satan in question is perhaps the greatest literary character in the finest epic poem in the English language, John Milton’s Paradise Lost. That makes Washington Republicans the other fallen angels.

In 2016, Republicans made a deal with the devil. Like Dr Faustus, they sold their souls for power. Now they stifle their consciences, never speak ill of President Trump, hug him closely, fearing the wrath of his base. The same Lindsey Graham who in 2016 wrote, ‘If we nominate Trump, we will get destroyed … and we will deserve it,’ recently said,...

Donald Trump is Satan. The Satan in question is perhaps the greatest literary character in the finest epic poem in the English language, John Milton’s Paradise Lost. That makes Washington Republicans the other fallen angels.

In 2016, Republicans made a deal with the devil. Like Dr Faustus, they sold their souls for power. Now they stifle their consciences, never speak ill of President Trump, hug him closely, fearing the wrath of his base. The same Lindsey Graham who in 2016 wrote, ‘If we nominate Trump, we will get destroyed … and we will deserve it,’ recently said, ‘To every Republican, if you don’t stand behind this president, we’re not going to stand behind you.’ Meanwhile, Trump skulks in the White House, mired in ‘the swamp.’

The first epic simile in Paradise Lost introduces Satan awash in a swamp of his own, ‘prone on the Flood’, having fallen from heaven to hell. As massive as ‘that Sea-beast Leviathan,’ Satan hulks so big from the sea that the pilot of ‘some small night-founder’d skiff’ might mistake him for an island, and seek to pass the night in safety ‘with fixed anchor in his scaly rind.’ It’s an old Norwegian seafarer’s fable. When the beast wakes, it dives into the depths of the ocean. The anchored skiff is dragged along. The sailor is pulled to his watery grave. Similarly, Republicans who have anchored their boat to Trump, thinking he’s an island providing protection from the sea, risk being dragged down to their demise when, like a whale startled from sleep, he goes plunging.

Trump as Satan: you might think it’s absurdly over-the-top, or want to celebrate it as a (literally) epic takedown, but this is not a political statement hurling invective. It’s an analytical statement describing what is happening – what will happen – and why, aided by the Miltonic intervention. Great literature helps us understand the world. Both politicians and literary critics do their jobs best when they’re willing to use literature to think about life.

Published in London in 1667, Paradise Lost is a Christian humanist epic about the war in Heaven and the fall of humankind in the Garden of Eden. Though he’s the ‘author of evil,’ Satan is shockingly an attractive character. He charms us with his energy. When God the Father anoints his Son king over the other angels, Satan, ‘Great in power’, doesn’t think it’s fair. The system was rigged. Milton – one of the fathers of modern liberalism, active in the Puritan rebellion against the royal absolutism of Charles I – lent Satan his own freedom-loving, tyrant-hating language, the outraged angel mounting a rebellion ‘to cast off this Yoke.’ A powerful orator, but loose with the truth, Satan secures a base of support, ‘and with lyes drew after him the third part of Heav’ns Host.’ This third of the angels back Satan to the bitter end, no matter what.

Satan’s opponents see his rhetoric as ‘calumnious art of counterfeited truth’ and ‘argument blasphemous, false and proud.’ The first Never Satan-er to stand up is an angel named Abdiel, earning God’s admiration:

‘Servant of God, well done, well hast thou fought
The better fight, who single hast maintaind
Against revolted multitudes the Cause
Of Truth’

War in Heaven erupts, angel against angel, the apostate against the faithful. After three days, God sends the Son to end it. The mere sight of the Son’s flaming chariot thundering toward them turns the apostate on their heels. They sprint away in retreat. The gates of Heaven open for them:

‘Headlong themselves they threw
Down from the verge of Heav’n, Eternal wrauth
Burnt after them to the bottomless pit.’

Trump’s minions won’t fall so willingly. Resistance to Trump hardly thunders with God’s wrath. Republicans are more likely to fall like the stars in the Book of Revelation, Milton’s source: ‘His tail swept down a third of the stars of heaven and threw them to the earth.’ That image of a falling Satan’s tail whipping out behind him, snagging the third of the angels that backed him, pulling them down, is what Milton invoked in the poem’s first epic simile. After crashing down in Hell, Satan lies belly-down in the swamp, a slumbering Leviathan.

The Leviathan is a massive sea monster from the book of Job. But Leviathan was also the name of a 1651 book by Milton’s contemporary, the monarchist Thomas Hobbes. He argued a king is, like the Leviathan, a massive figure with limitless power, one to be feared and respected, or else. Milton opposed Hobbes in the debate about monarchy, insisting kings should be subject to laws.

Trump wants to be Hobbes’s Leviathan. Republicans will find he is Milton’s Leviathan. Paradise Lost doesn’t say what happens when the beast awakens. Milton leaves us in suspense. Similarly, Trump is still afloat, but he’s going down, and not just in his willingness to take a fight into the gutter. Whether through impeachment, resignation, or democratic vote, his time is short. And then he will go down as one of the worst presidents in history.

When he goes down, Trump will drag along those tethered to him. For decades, Americans will decline to forgive the Republicans of the Trump era. As sleeping pilots on a dangerously anchored boat, Washington Republicans have a choice. Wake up and cast off from Trump — speak your conscience, your faith, and your family values — or get dragged down into the abyss, never to be heard from again.