An excerpt from Irreversible Damage 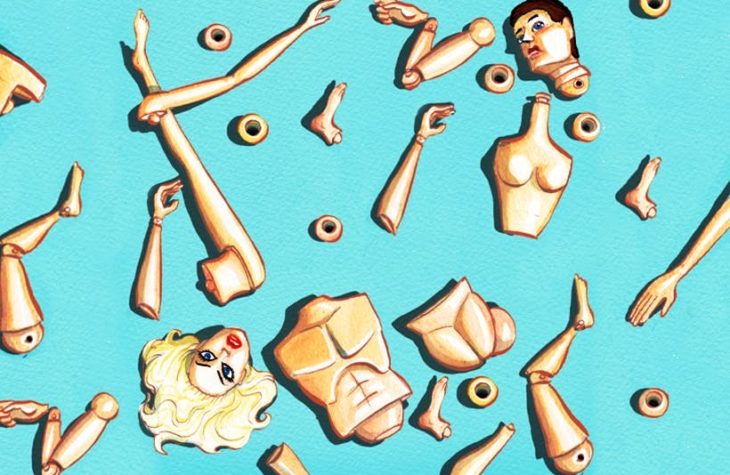 Lucy had always been a ‘girly girl’, her mother swore. As a child, she would climb into high heels and frilly dresses to do her chores, retiring to a bedroom packed with Beanie Babies and an expansive array of pets she tended — rabbits, gerbils, parakeets. Dress-up was a favorite game, and she had a trunk full of gowns and wigs she would dip into, inhabiting an assortment of characters — every one of them female. She embraced the girlhood of the late 1990s, adoring the Disney princess movies, especially The Little Mermaid, and later, Twilight and its...

Lucy had always been a ‘girly girl’, her mother swore. As a child, she would climb into high heels and frilly dresses to do her chores, retiring to a bedroom packed with Beanie Babies and an expansive array of pets she tended — rabbits, gerbils, parakeets. Dress-up was a favorite game, and she had a trunk full of gowns and wigs she would dip into, inhabiting an assortment of characters — every one of them female. She embraced the girlhood of the late 1990s, adoring the Disney princess movies, especially The Little Mermaid, and later, Twilight and its sequels.

Lucy was precocious. At five, she read at a fourth-grade level and showed early artistic promise, for which she would later win a district-wide prize. But as she reached middle school, her anxiety spiked. The waters of depression rushed in. Her affluent parents — mom was a prominent Southern attorney — took her to psychiatrists and therapists for treatment and medication, but no amount of talk therapy or drugs leveled her social obstacles: the cliques that didn’t want her, her nervous tendency to flub social tests casually administered by other girls.

Boys gave her less trouble, and she had male friends and boyfriends throughout high school. Home life wasn’t easy; her older sister fell into a drug addiction that tore through the family like a hurricane, consuming both parents’ attention. Lucy’s ups and downs eventually resolved in a bipolar II diagnosis. But making and keeping female friends proved a trial that never concluded in her favor nor ever really let up.

Liberal arts college in the Northeast began, as it so often does these days, with an invitation to state her name, sexual orientation, and gender pronouns. Lucy registered the new chance at social acceptance, a first whiff of belonging. When her anxiety flared later that autumn, she decided, with several of her friends, that their angst had a fashionable cause: ‘gender dysphoria’. Within a year, Lucy had begun a course of testosterone. But her real drug — the one that hooked her — was the promise of a new identity. A shaved head, boys’ clothes, and a new name formed the baptismal waters of a female-to-male rebirth.

The next step — if she took it — would be ‘top surgery’, a euphemism for a voluntary double mastectomy.

‘How do you know this wasn’t gender dysphoria?’ I asked her mother.

‘Because she’d never shown anything like that. I never heard her ever express any discomfort over her body. She got her period when she was in the fourth grade, and that was super embarrassing for her because it was so early, but I never heard her complain about her body.’

Her mother paused as she searched for an apt memory. ‘I made her get a pixie haircut when she was five and she just cried buckets over it because she thought she looked like a boy. She hated it.’ And then, ‘She’d dated boys. She’d always dated boys.’

Under the influence of testosterone and the spell of transgression, her mother said, Lucy became churlish and aggressive, refusing to explain this new identity or answer any questions about it. She accused her mother of being a ‘gatekeeper’ and a ‘transphobe’. Lucy’s manufactured story of having ‘always known she was different’ and having ‘always been trans’, her mother later discovered, had been lifted verbatim from the internet.

In her new, highly combustible state, Lucy would fly into rage if her parents used her legal name — the one they had given her — or failed to use her new pronouns. In short order, her parents hardly recognized her. They became alarmed by Lucy’s sudden thrall to a gender ideology that seemed, well, a lot of mumbo jumbo, biologically speaking. Her mother said it seemed as though Lucy had joined a cult; she feared it might never release her daughter.

I liked Lucy’s mother, the Southern lawyer, and fell readily into the story she told, but I was an opinion writer, not an investigative reporter. I passed her story on to another journalist and assured Lucy’s mother she was in good hands. Long after I had moved on to other topics for the Wall Street Journal and the lawyer was swept from my inbox, her story remained stubbornly lodged in my brain.

Three months later, I got back in touch with Lucy’s mother and all the contacts she had initially sent. I spoke with physicians — endocrinologists, psychiatrists, those plastic surgeons who perform gender surgery, and those who refuse to. I spoke with world-renowned psychologists specializing in gender dysphoria. I spoke with gender affirming psychotherapists and those psychotherapists who believe gender affirmation is not valid psychotherapy at all. I spoke with more than four dozen parents of suddenly-identifying transgender adolescents. I spoke with the adolescents themselves and transgender adults to gain a glimpse of the interiority of their experience, the liberating tug of cross-sex identification. I also spoke with ‘desisters’, those who once identified as transgender and later stopped, and with ‘detransitioners’, those who had undergone medical procedures to alter their appearances, only to arrive at regret and scramble to reverse course. I conducted nearly 200 interviews.

It turned out, Lucy’s mother was far from alone. In the last decade, across the West, gender dysphoria — severe discomfort in one’s biological sex — has spiked by 1,000 percent in the US and 4,000 percent in the UK. And while for the nearly 100-year diagnostic history of gender dysphoria, the disorder typically presented in early childhood (ages two to four) and overwhelmingly afflicted boys and men, the demographic driving the recent surge is utterly different. It is adolescent girls who had no history of childhood dysphoria at all. The more I learned about the adolescents who suddenly identify as transgender, the more haunted I became by one question: what’s ailing these girls?

In January 2019, the Wall Street Journal ran my piece, ‘When Your Daughter Defies Biology’. It provoked nearly a thousand comments, and hundreds of responses to those comments. A transgender writer, Jennifer Finney Boylan, quickly wrote a rebuttal in an op-ed that appeared two days later in the New York Times. Her op-ed garnered hundreds of comments and hundreds more reactions to those comments. All of a sudden, I was flooded with emails from readers who had experienced with their own children the phenomenon I had described or had witnessed its occurrence at their kids’ schools — clusters of adolescents in a single grade, suddenly discovering transgender identities together, begging for hormones, desperate for surgery.

This is a story Americans need to hear. Whether or not you have an adolescent daughter, whether or not your child has fallen for this transgender craze, America has become fertile ground for this mass enthusiasm for reasons that have everything to do with our cultural frailty: parents are undermined; experts are over–relied upon; dissenters in science and medicine are intimidated; free speech truckles under renewed attack; government healthcare laws harbor hidden consequences; and an intersectional era has arisen in which the desire to escape a dominant identity encourages individuals to take cover in victim groups.

Transgender success stories are everywhere told and celebrated. They march under the banner of civil rights. They promise to breach the next cultural frontier, to shatter one more basis of human division.

But the phenomenon sweeping teenage girls is different. It originates not in traditional gender dysphoria but in videos found on the internet. It represents mimicry inspired by internet gurus, a pledge taken with girlfriends — hands and breath held, eyes squeezed shut. For these girls, trans identification offers freedom from anxiety’s relentless pursuit; it satisfies the deepest need for acceptance, the thrill of transgression, the seductive lilt of belonging.

As one transgender adolescent, ‘Kyle’, put it to me: ‘Arguably, the internet is half the reason I had the courage to come out. Chase Ross — a YouTuber. I was 12. I followed him religiously.’ Chase Ross was kind enough to speak to me for my book, to help me understand what’s in the sauce.