The Man in the Red Coat by Julian Barnes reviewed 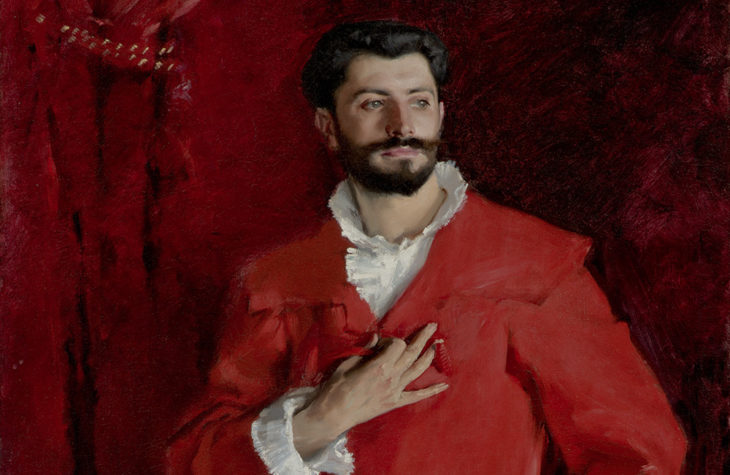 Do not Google Samuel Jean Pozzi. If you want to enjoy Julian Barnes’s The Man in the Red Coat — and believe me, it’s teeming with delights — trust the author to tell the story his own way.

Just to get you started: Pozzi (1846–1918), the man John Singer Sargent painted in sumptuous red, was France’s first professor of gynecology, a prominent, pioneering doctor in Belle Époque Paris, and a charming, ubiquitous, infallibly seductive socialite. ‘Disgustingly handsome’ is how the Princess of Monaco described him. He was...

Do not Google Samuel Jean Pozzi. If you want to enjoy Julian Barnes’s The Man in the Red Coat — and believe me, it’s teeming with delights — trust the author to tell the story his own way.

Just to get you started: Pozzi (1846–1918), the man John Singer Sargent painted in sumptuous red, was France’s first professor of gynecology, a prominent, pioneering doctor in Belle Époque Paris, and a charming, ubiquitous, infallibly seductive socialite. ‘Disgustingly handsome’ is how the Princess of Monaco described him. He was Sarah Bernhardt’s doctor and also her lover; she called him ‘Docteur Dieu’. His other nickname was ‘L’Amour médecin’, which Barnes translates winningly as Dr Love.

‘Chauvinism is one of the forms of ignorance,’ Pozzi wrote in the introduction to his ground-breaking two-volume treatise on gynecology. Conscience, he declared, must be ‘the first characteristic of a doctor, especially one who wields a knife’. He had his human failings in the family way: he was not a good husband to his rich wife and was a flop as father to his unhappy, high-minded and highly strung daughter. And yet — enlightened and amusing, engaged and engaging — Docteur Dieu is an undiscovered hero.

If that’s not enough, here’s Barnes’s hook: in June 1885, Pozzi accompanied Prince Edmond de Polignac and Count Robert de Montesquiou on a trip to London for what Montesquiou described as some ‘intellectual and decorative shopping’. The trio arrived armed with a letter of introduction from Sargent to Henry James. The novelist steered his French visitors from concert hall to gallery to bookshop, to Liberty’s department store and Bond Street tailors, and to encounters with Burne-Jones, Rossetti, Alma-Tadema and Whistler.

Who were Pozzi’s aristocratic pals? Polignac was a musician, a gentle, retiring soul, sweet and consequently somewhat less interesting than the others. He plays a relatively minor part in the story, serving chiefly to illustrate a Jamesian theme: dead-broke European noblemen marrying vastly rich American heiresses, in this case Winnaretta Singer (think Singer sewing machines). It was a happy match. ‘Polignac all his life had been a discreet but known homosexual,’ Barnes writes. ‘Yet far from being an impediment, this proved to be his unique selling point, because Singer, in her turn, was a discreet but known lesbian.’

Montesquiou was a poet and a dandy. Proust admired him as ‘the Professor of Beauty’; Sargent called him ‘unique and extra-human’. A deliciously displeasing individual, he possessed a toxic yet alluring blend of arrogance, snobbery, ruthlessness, wit and style. His name is inextricably linked with the fictional character he inspired: Des Esseintes, the dissolute protagonist of Huysmans’s 1884 novel À Rebours (Against Nature). After reading the novel on his honeymoon in Paris that year, Oscar Wilde called it ‘one of the best I’ve ever seen’ — a weighty endorsement given Wilde’s allergy to seriousness.

The icing on this high-culture confection is that all three French tourists were ‘partially, refractedly’ turned by Proust into characters in À la recherche du temps perdu. Why didn’t Barnes do the same? He could have made Samuel Pozzi the protagonist of a spectacular historical novel, just as 15 years ago he borrowed Arthur Conan Doyle and George Edalji for his copiously researched Arthur & George. Or he could have stitched a spool of facts about Pozzi into a fictional tapestry, as he did 35 years ago in Flaubert’s Parrot.

But no. Barnes has chosen to produce a scrupulously non-fictional portrait of Pozzi, a life-and-times biography, only dismantled and disordered. It’s a modernist approach — you could call it Cubist. Crowded with colorful Belle Époque characters, the narrative cheerfully digresses here and there. Barnes pops up occasionally to comment on his own methods. On the loathsome journalist Jean Lorrain: ‘He is someone you half want to keep out of your book, for fear he might take over too much of it,’ which almost sounds like praise. Barnes as tour guide is humorous, occasionally crotchety and always prudishly skeptical:

‘Everyone knows — or rather “everyone knows” — that Count Robert de Montesquiou owned a pet tortoise, whose shell was painted gold and studded with precious stones.’

The scare quotes separate Barnes’s method from Huysmans’s: in À Rebours, Des Esseintes has such a pet; Montesquiou, perhaps not in ‘real life’. Part of the novelist’s job, Barnes explains, is ‘to turn a slight, even false rumor into a glitteringly certain reality.’ Part of the biographer’s job is to separate what we know from what we don’t: ‘We cannot know, but we can certainly doubt.’

‘We cannot know’ becomes Barnes’s proud refrain, first deployed regarding the genesis and duration of the Pozzi-Bernhardt affair. Later he calls it ‘one of the strongest phrases in the biographer’s language’:

‘It reminds us that the suave study-of-a-life we are reading, for all its detail, length and footnotes, for all its factual certainties and confident hypotheses, can only be a public version of a public life, and a partial version of a private life. Biography is a collection of holes tied together with string, and nowhere more so than with the sexual and amatory life.’

Barnes wants to do justice to Pozzi, to spare him both the glittering certainties of fiction and the pompous, false authority of conventional biography. (The clever line about biography being a collection of holes is recycled material, originally from Flaubert’s Parrot.) But what is it about Pozzi, an early and ardent champion of Joseph Lister’s lifesaving antiseptic procedures, that he requires such sanitized treatment?

Barnes tells us that one of the first things he read about Pozzi was that Docteur Dieu was ‘not only the father of French gynecology but also a confirmed sex addict who routinely attempted to seduce his female patients’. This casual smear clearly outraged Barnes, who is nonetheless cautious and open- minded — ‘we cannot know’ — in defense of his hero. He finds not ‘a single recorded note of female complaint’ against Pozzi, and hardly a whisper of gossip in a time and place where scandal was a national pursuit.

Barnes wisely observes that this silence could be ‘just another aspect of the way male power played out’. Calmly, though, and convincingly, he argues that Pozzi’s affairs were consensual and that he was not a ‘ruthless libertine’, let alone a ‘sex addict’. The accusation, Barnes concludes, can only stem from ‘a 21st-century coarsening of language and memory’.

The Man in the Red Coat has larger ambitions than defending Pozzi’s ‘sexual and amatory life’. Barnes has a sharp eye for how art and life interact, a mimetic ebb and flow nowhere near as predictable as the tides. Weighing up the differences between the French and the English is an old Barnes habit, unbroken by Brexit, Britain’s ‘deluded, masochistic departure from the European Union’. So is musing on past and present, and the distortions involved in looking forward or back — or even into the mirror: ‘No one in Paris ever said to one another, in 1895 or 1900, “We’re living in the Belle Époque, better make the most of it.”’

Barnes has great fun introducing us to Pozzi’s sophisticated world and letting his extravagant cast of dandies, aesthetes and artists prance across the stage, but he doesn’t neglect the darker side. In an ‘an age of neurotic, even hysterical national anxiety’, he punctuates his story with senseless duels and cold-blooded assassinations.

In Levels of Life (2013), another brilliant, defiantly unconventional book, Barnes issued a miniature manifesto: ‘Writers believe in the patterns their words make, which they hope and trust add up to ideas, to stories, to truths.’ The truth he’s aiming at here, which emerges gradually from the artful jumble of anecdote and digression, is Flaubertian. Accurate description performs a corrective function by showing us how things truly are — and aren’t. Here is Samuel Pozzi, says Barnes: an extraordinary though not ‘extra-human’ Frenchman who died 100 years ago after living an implausibly rich and worthy life. There is of course much we cannot know — but here he is.