An American debut, only a century late 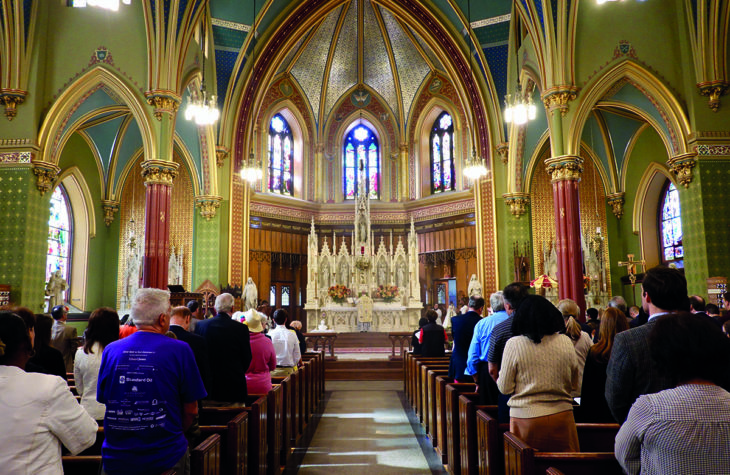 The interior of St John the Evangelist, Stamford, Connecticut

The exterior of the basilica of St John the Evangelist in Stamford, Connecticut, looms large and gray. Built in 1875 by Irish immigrants who mined and hauled rocks from a nearby quarry, its interior bursts with greens, reds and golds. The saintly lives in its stained-glass windows are said to comprise one of the largest collections of its kind on the East Coast.

I was one of 12 singers to perform here at the American premiere of the Mass in G Major by the Dublin-born composer Sir...

The exterior of the basilica of St John the Evangelist in Stamford, Connecticut, looms large and gray. Built in 1875 by Irish immigrants who mined and hauled rocks from a nearby quarry, its interior bursts with greens, reds and golds. The saintly lives in its stained-glass windows are said to comprise one of the largest collections of its kind on the East Coast.

I was one of 12 singers to perform here at the American premiere of the Mass in G Major by the Dublin-born composer Sir Charles Villiers Stanford (1852-1924). Stanford’s Mass was first performed at London’s Brompton Oratory in 1893, but, like The Spectator, it took its time coming to America. Though many Masses survive in the western canon — Mozart’s Requiem, Mendelssohn’s Mass for Double Choir — they are seldom performed in the context for which they were written. Our performance, however, was a rare religious experience.

The occasion was a Mass celebrating the canonization of the English cardinal, theologian and philosopher John Henry Newman (1801-90). Newman also had a connection to Ireland. He gave his lectures, The Idea of the University, in Dublin while serving as rector of the Catholic University of Ireland. Newman was a controversial figure: too liberal for conservatives, too conservative for liberals; too Anglican for the Catholics when he opposed Catholic emancipation and, ultimately, too Catholic for the Anglicans. He had converted to Catholicism in 1845, a move he described as ‘like coming into port after a rough sea’.

We, the choir and orchestra, were under the baton of the basilica’s young and energetic musical director, Nick Botkins. The soloists were drawn fresh from Yale’s opera program. ‘All beauty and no brains,’ one instrumentalist muttered, using musician’s shorthand for ‘can neither read nor count’.

Botkins is also a convert to Catholicism and, like all the best American church musicians, an Anglophile. ‘The [Mass] parts had been locked in the London Oratory since its composition date in 1892,’ he told me. After visiting the Oratory five years ago, he became determined to revive Stanford’s Mass in America. A librarian at the Royal College of Music, Josephine Lappin, copied out the score by hand. ‘Hers was a labor of love,’ he said.

I can see why he likes the piece so much. For one thing, it’s a very pleasant sing: triumphant fanfares, elegant phrasing — all very buoyant and tuneful. Nevertheless, there does exist in English choral music a peculiar and unavoidable tension in regard to the Catholic liturgy. While Protestants have their hymns and sermons, Catholics have only repetition and dry Latin or Greek phrases: ‘Kyrie eleison, Christe eleison, Kyrie eleison.’ In place of poetry, Catholics have more basic elements: bells, chest-beating, the continual standup-sit-down and the outrageous claim that bread is transformed into the literal flesh of Jesus Christ. Catholicism, you might say — and Oscar Wilde once did say — is not a religion for respectable people.

For those who understand what it’s about, then, the Mass needs no additional drama or music to make it more interesting. But there are many who do not understand it all. As Robert Bolt wrote in his play A Man for All Seasons, about the martyrdom of St Thomas More, ‘The nobility of England would have snored through the Sermon on the Mount.’ More’s execution and Henry VIII’s separation from Rome were, of course, the beginning of the end for the Catholic Church in England. That was also, not by coincidence, when Catholic music began to sour, leading eventually to the modern age of guitars in church (an abomination) and renditions of ‘You’re oh so lovely, oh so wonderful’, borrowed from the Evangelicals.

‘The fall of western civilization,’ Botkins tells me somberly, ‘corresponds with the fall of the Mass.’ But he remains confident that the Mass will be revived. Though concert hall performances are a ‘completely different experience’, he argues that Catholics ought not to ‘pooh-pooh’ them, as they ‘kept this music alive’.

Reviewing Stanford’s Irish Symphony for the World newspaper in 1893, George Bernard Shaw detected deep-rooted insecurity and declared it ‘insufferable’ in the way of Irish nationalism:

‘Far from being a respectable oratorio-manufacturing talent, it is, when it gets loose, eccentric, violent, romantic, patriotic, and held in check only by a mortal fear of being found deficient in what are called ‘the manners and tone of good society’. This fear, too, is Irish: it is, possibly, the racial consciousness of having missed that four hundred years of Roman civilization which gave England a sort of university education when Ireland was in the hedge school.’

I ask Botkins whether Stanford makes a similar mistake in his Mass with regard to Catholicism. Does his high Romanticism undermine the point of it all? ‘No,’ Botkins insists. But is the Mass really the best musical means of keeping Christianity and our western inheritance alive? What about, for instance, revivals through popular music, like Kanye West’s recent album, Jesus is King?

‘Oh, but have you heard his fugues?’ Botkins replies. ‘They’re not very good.’

Madeleine Kearns is a staff writer at National Review and a visiting fellow at the Independent Women’s Forum.