A House in the Mountains: The Women Who Liberated Italy from Fascism by Caroline Moorehead reviewed 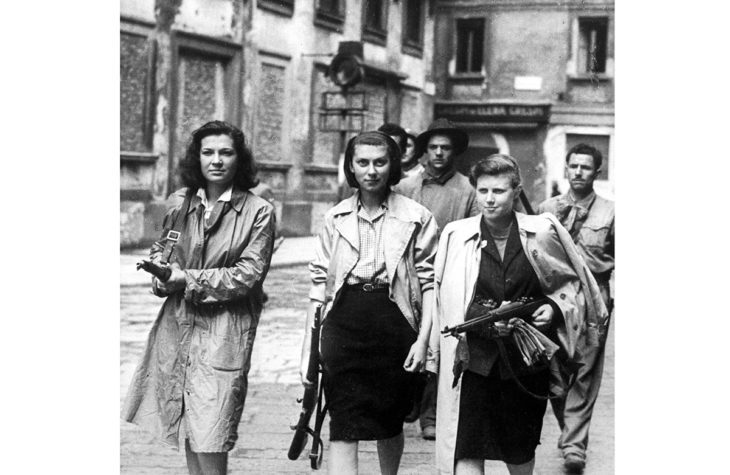 ‘I am a woman,’ Ada Gobetti wrote in a clandestine Piedmont newsletter in 1943. ‘An insignificant little woman, who has revolutionized her private life — a traditionally female one, with the needle and the broom as her emblems — to transform herself into a bandit...I am not alone.’

Ada, one of four female partisans whose interconnected stories weave through this history, knew what few Germans or Italian fascists yet suspected. All across Nazi-occupied northern and central Italy, thousands of women had started to resist. Factory workers subtly...

‘I am a woman,’ Ada Gobetti wrote in a clandestine Piedmont newsletter in 1943. ‘An insignificant little woman, who has revolutionized her private life — a traditionally female one, with the needle and the broom as her emblems — to transform herself into a bandit…I am not alone.’

Ada, one of four female partisans whose interconnected stories weave through this history, knew what few Germans or Italian fascists yet suspected. All across Nazi-occupied northern and central Italy, thousands of women had started to resist. Factory workers subtly sabotaged the products of their forced labor. Village women whisked men into the hills, feeding and sheltering them as they organized into guerrilla units. Others, many still teenagers ‘with pigtails and white socks’, served as staffette — acting as lookouts, liaising between the fledgling partisan groups, transporting messages and weapons, preparing and distributing clandestine literature, and identifying and sometimes collecting the bodies of executed men.

A significant number also trained in the use of firearms before specializing in rescues, hostage-taking and sabotage attacks, fighting as equals alongside their male comrades. Yet this is a history little remembered and even less understood today.

A House in the Mountains, the final volume in Moorehead’s acclaimed Resistance Quartet — about women who fought fascism in occupied Europe — opens in the sultry summer of 1943. After 21 years of dictatorship and three of war, Mussolini was about to be deposed by his own Grand Council. A key part of his credo had been that men and women are inherently different. After his initial downfall, women of both fascist and antifascist persuasions felt inspired to defend family and country.

While Moorehead recognizes the role of the Fasci Femminili, the fascist women’s league, her focus is on the resourceful female partisans. As Italy lurched from the energy of revolution to the chaos and horror of civil war, these impressive women gained a taste for previously unknown freedom, activity, camaraderie and respect. Their fight became for the liberation of Italy not only from German occupation but also from homegrown fascism; their allegiance was to a new Italy in which they would have equal voices, opportunities and rights.

One reason women were so invaluable in resistance movements across Europe was that their sex made them less suspicious. In Italy, it took time for Nazis and fascists to recognize the role the women played. As Moorehead’s meticulous research and eye for human detail make evident, male partisans were also often surprised by the staffette’s attitudes and abilities. ‘I am not a donnetta,’ one coolly responded to the thanks of her commander, after the ‘little girl’ had brought a message across enemy lines where the two male couriers before her had been killed. ‘I am a donna.’

The book is packed with such stories, but inevitably there is also much that makes difficult reading. Many staffette were suspected by their own side, and when the occupying Germans started to realize what the laughing girls whose heavy bags they helped to carry and the old ladies to whom they offered their seats on the tram were actually up to, their response was brutal.

This is a rich telling of complex but fascinating history, not solely addressing the female story, but including it within the whole. Striking themes include the uneasy relations between the Italian partisans and the Allies, particularly the British, and the implicit parallels and differences between resistance movements in Italy and in countries such as France and Poland, which also hoped to welcome Allied forces as equals rather than liberators.

It is, however, Moorehead’s sensitive use of the inspiring if sometimes harrowing stories of Ada and her comrades Frida Malan, Silvia Pons and Bianca Serra, and the Jewish and partisan circles around them, including that of Primo Levi, which really brings new insight to her account of the liberation of Italy. A useful chronology and list of the principal characters, of whom there are many, helps readers to keep track.

After the war, the vital role played by Italian female partisans was belittled as resistenza passiva, as opposed to the resistenza armata of their male comrades. Most staffette were excluded from victory parades, and the few who were allowed to march at the back heard themselves abused as ‘whores’. The equal opportunities for which the women had fought would take decades to emerge. This brilliant book restores women to the heart of the Italian resistance story, making clear that they performed all the same activities as the men while facing precisely the same dangers, if with supplementary goals.

‘I hate neutrality in all its forms,’ Gobetti, who had a postwar political career, later wrote. ‘You have to believe in something and then fight for it, not impersonally but with the greatest passion.’ Between 1943 and 1945, many other Italian women discovered that they, too, hated neutrality. This, at last, is their powerful story.