America must teach immigrants how to be Americans 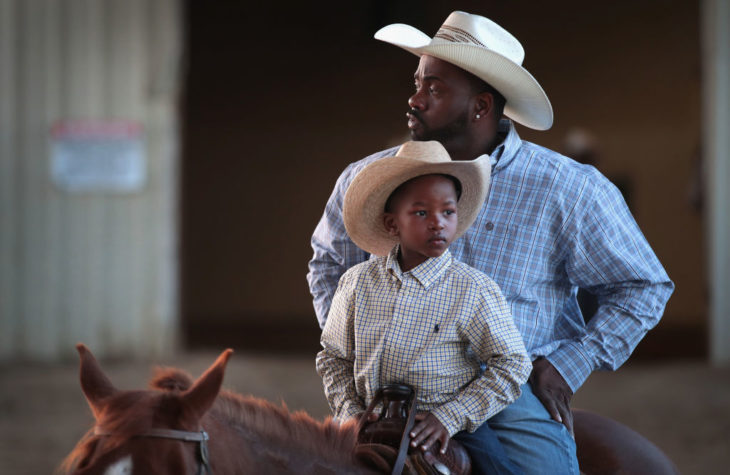 MEMPHIS, TN – APRIL 01: Jamil Hunt shares a saddle with his six-year-old son Jamil Hunt Jr. as they prepare to ride into the arena for the start of competition at the Bill Pickett Invitational Rodeo on April 1, 2017 in Memphis, Tennessee. The Bill Pickett Rodeo is the nation’s only touring black rodeo competition. The rodeo celebrates western heritage and the contributions that black cowboys and cowgirls have made to the sport of rodeo. (Photo by Scott Olson/Getty Images)

Americans have long thought that they are no different from other people, only freer and more fortunate. We pride ourselves on living independent lives in which we work out our personal destiny. We wish that everyone had these opportunities. But that individualist style of life is far less universal than most people think, and today it has come into question both at home and abroad. To recognize and address the reality of cultural difference is the leading challenge of our time.

Individualism means daring to pursue our own goals and values. That culture is unique to the Western world:...

Americans have long thought that they are no different from other people, only freer and more fortunate. We pride ourselves on living independent lives in which we work out our personal destiny. We wish that everyone had these opportunities. But that individualist style of life is far less universal than most people think, and today it has come into question both at home and abroad. To recognize and address the reality of cultural difference is the leading challenge of our time.

Individualism means daring to pursue our own goals and values. That culture is unique to the Western world: Europe and its offshoots, including America. It made Europe and then the United States unusually rich and powerful, so that they came to lead the world. Most Americans descend from that assertive tradition. But important parts of our society came from other regions — Africa, Asia, or Latin America — where most people cautiously adjust to the outside world, rather than seeking change.

All of America’s toughest tests today involve tensions between these different ways of life. Within the United States, individualism is fading among low-income Americans and the lower-skilled working class, who are less able than they once were to take responsibility for themselves.  Immigrants, too, are less individualist today than they were a century ago, because they chiefly come from Asia or Latin America rather than Europe. So adjusting to America’s individualist culture is harder for them than for earlier newcomers. Abroad, America must deal with poor countries much worse governed than ourselves. We also face Asian challengers for world leadership, particularly China, who are also not individualist.

Since non-Western groups and nations are mostly non-white, we traditionally view these differences as racial. That is why our establishment has suppressed all discussions of culture, fearing racism. We say we have a multicultural society, but to discuss group differences is forbidden. That has been a tragic mistake. My new book, Burdens of Freedom, rejects both sameness and racism. The differences that matter are cultural, in what people think life is about, in what they seek to do or be.  We need to address those divisions and not be deterred by race.

Scholars of world cultures agree that the difference between West and non-West is large and important. How that difference arose is unclear, lost in history, but is not clearly connected to race. Yet expert discussions of public policy have paid almost no attention to cultural difference, in either domestic or foreign affairs. We persist in thinking that all peoples, and all countries, are individualist, when, on average, they are not.

A focus on cultural difference lets us appraise our challenges more realistically. The main reason we have serious poverty in America, for instance, isn’t that economic opportunities are lacking, but that most poor adults descend from non-Western cultures and thus do not seize opportunity as strongly as the better-off. The answer is not to give them more benefits, but to promote work as essential to making it in America. Similarly, our immigration problem is not fundamentally that many migrants come here illegally or go on welfare. It’s that most of them lack an individualist style, and that assimilation has broken down. Migrant numbers need to be reduced, so that the schools have a better chance to teach immigrant children the American way of achievement.

Over 50 years after the Civil Rights Act, minorities’ main problem is no longer that society denies the chance to compete fairly against whites. It’s rather that equal opportunity takes an individualist temperament for granted — and the non-Western groups have to learn that after they get here. We seek a multicultural society that accepts group differences but where all groups also pursue personal goals. It is time to abandon the more passive and reactive non-Western style. The main goal of social policy should be to promote a more forward-looking style.

In this, black Americans are exemplars. Most of them came originally from Africa, the least individualist of all world regions. Yet they have made prodigious contributions to American life. And over time, a substantial share of the group has become individualist. Blacks now regularly appear as leaders in every realm of national life because they pursue advancement just like other groups. This fusion of group and national style is a model for the nation. The black middle class shows everyone the way forward.

Americans may lead the world, yet we are few in number. Students from all over the world flow to our world-leading universities, which exemplify our assertive and optimistic way of life. And given war and chaos in poor countries, migrants by the millions inevitably seek escape to the West. America must continue to lead that world — or be overwhelmed by it.

Lawrence M. Mead is Professor of Politics and Public Policy at New York University. This excerpt is from his new book Burdens of Freedom: Cultural Difference and American Power (Encounter).