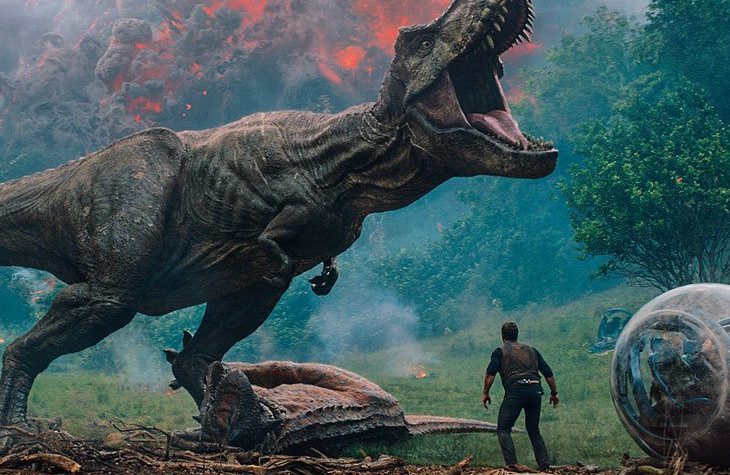 Back in the mists of prehistory, when I was eight, dinosaur films followed a set pattern. The dinosaurs themselves would be cheerfully unpalaeontological; women would wear improbable outfits; volcanoes would explode. Then, in 1993, courtesy of Steven Spielberg, came a sea-change. Jurassic Park was that cinematic rarity: a science fiction film that succeeded in influencing the science it was fictionalising. The story of a theme park populated by resurrected dinosaurs, it offered a portrayal of Mesozoic fauna that was as close to authentic as could then plausibly be achieved. For the first time, computer-generated imagery...

Back in the mists of prehistory, when I was eight, dinosaur films followed a set pattern. The dinosaurs themselves would be cheerfully unpalaeontological; women would wear improbable outfits; volcanoes would explode. Then, in 1993, courtesy of Steven Spielberg, came a sea-change. Jurassic Park was that cinematic rarity: a science fiction film that succeeded in influencing the science it was fictionalising. The story of a theme park populated by resurrected dinosaurs, it offered a portrayal of Mesozoic fauna that was as close to authentic as could then plausibly be achieved. For the first time, computer-generated imagery was used to portray dinosaurs as scientists had come to envisage them: agile, bird-like, smart. The impact was profound. A whole generation of palaeontologists who were inspired by Jurassic Park as children has now come of age. The result has been a golden age of dinosaur discoveries. That our understanding of how these long-extinct creatures looked and functioned has changed considerably since Jurassic Park is — at least in part — a tribute to its original impact.

It is unlikely that Jurassic World: Fallen Kingdom will inspire a similar palaeontological boom. It is, much like the genetically enhanced dinosaur that stalks and skitters its way around the central section of the plot, a hybrid. In certain ways, it is true to the inheritance of Jurassic Park. The special effects are predictably competent; a species never before seen in the franchise, the dome-head Pachycephalosaurus, is introduced to delightful effect; a brachiosaur perishes in a scene of unexpected pathos. In other ways, though, it is all frustratingly retro. Velociraptor, so chic and abreast of scientific fashion back in 1993, is now frumpishly out of date, since she lacks the feathers that are the signature of the great revolution that has taken place in our understanding of dinosaurs since Jurassic Park. Bryce Dallas Howard — whose stilettos in the first incarnation of Jurassic World rivalled Raquel Welch’s fur bikini as the most impractical items of clothing ever worn by an actress tasked with escaping a dinosaur — screams a lot, and depends on a hunk to rescue her.

There’s even a volcano. But, in a break with the tradition established by One Million Years B.C., its explosion comes, not at the end of the film, but midway through. The island to which the dinosaurs have largely been confined for the duration of the franchise is incinerated, and only those which have been transferred to the hold of a giant cargo ship survive. The result is certainly to broaden the range of locations in which they can go on the rampage. All of us who have watched Downton Abbey, and wondered how it might have looked with the addition of a hungry theropod, finally have our question answered. In other ways, though, the transfer of the dinosaurs to a stately home does little to diversify the plot. Elements that have been an unfailing feature of the franchise since its very first iteration are all present and correct. Dodgy bio-engineers; greedy capitalists; an adorable moppet: nothing has really changed.

‘A rescue op to save the dinosaurs from an island that’s about to explode — what could go wrong?’ Less a postmodern joke than a weary acknowledgement that originality has ceased to be even an aspiration, this is dialogue befitting a film that, much like its villains, is cynical, one-dimensional and oddly colourless. Despite moments of visual spectacle that would have made John Martin gasp, it is ultimately a depressing betrayal of everything that made Jurassic Park so ground-breaking. ‘Do you remember the first time you saw a dinosaur?’ asks Howard’s character as she gazes up at a brachiosaur. ‘We don’t really believe it. It’s like a miracle.’ The scene is a homage to — or a plagiarism of — the moment in Jurassic Park when Spielberg gave his audience what was, for most of us, our first ever view of a computer-generated dinosaur. The comparison does not do Fallen Kingdom any favours. The sense of wonder that such creatures as dinosaurs once walked the same planet as we now walk, which Spielberg channelled to such potent and lucrative effect, is gone.

Fallen Kingdom will no doubt make quite as much money as Jurassic Park did — and no doubt, when the next film in the series comes lumbering along, I will go and see that as well, because I love dinosaurs, and will always watch anything that features them. But I will know, as I do so, that I am being ripped off.