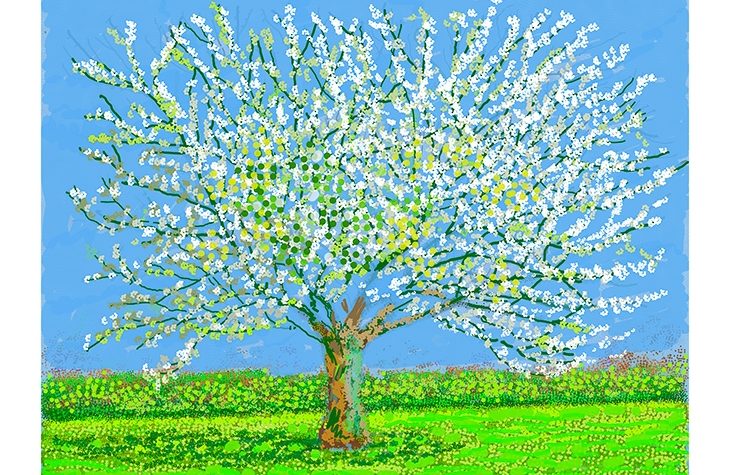 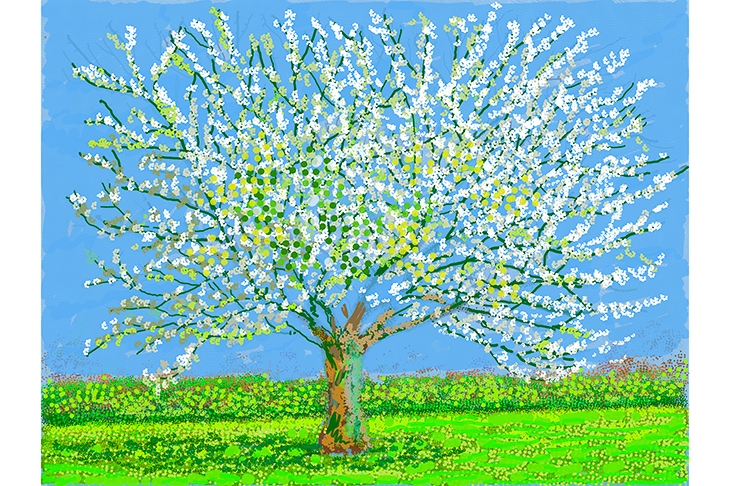 In 2018 David Hockney went to Normandy to look at the Bayeux Tapestry, which he had not seen for more than 40 years. He liked its great panoramic length and the absence of shadows. But while there he found himself seduced by the scenery of Normandy, its winding lanes and orchards of blossom trees. He decided he would like to paint the arrival of spring there, as he had in Woldgate, East Yorkshire, a decade earlier.

He asked his long-standing assistant, Jean-Pierre Goncalves de Lima, known as J-P, to look into the possibility of renting a...

In 2018 David Hockney went to Normandy to look at the Bayeux Tapestry, which he had not seen for more than 40 years. He liked its great panoramic length and the absence of shadows. But while there he found himself seduced by the scenery of Normandy, its winding lanes and orchards of blossom trees. He decided he would like to paint the arrival of spring there, as he had in Woldgate, East Yorkshire, a decade earlier.

He asked his long-standing assistant, Jean-Pierre Goncalves de Lima, known as J-P, to look into the possibility of renting a house. He was so delighted with the first one J-P showed him, La Grande Cour, that he exclaimed: ‘Let’s buy it!’ It was a rambling farmhouse, all higgledly-piggledy, with many wooden beams and no straight lines — ‘even the corners have no straight lines!’—set in four acres of fields and orchards. His one fear was that the house might be cold, but J-P assured him that he would make it warm. J-P went out to supervise the restoration work in January 2019 and Hockney moved in three months later.

Almost as soon as he arrived, he started sending a stream of emails and iPad drawings to his friend, the art critic Martin Gayford. He and Gayford had known each other for years and collaborated on a book, A History of Pictures, in 2016, so Gayford was naturally keen to hear about Hockney’s new project, and went out to visit La Grande Cour that summer. Their conversations and email exchanges, with Hockney’s iPad drawings, form the basis of this book.

Hockney explains that he moved to France because he wanted somewhere very quiet, cut off, where he wouldn’t be ‘nattered’ to by visitors as he was in Los Angeles or London. Although he retained his London base in Pembroke Studios, he had no desire to live there, and was very happy to spend lockdown in Normandy. He had lived in Paris from 1973-5 so he spoke the language, liked the food, and also knew that the French were more kindly disposed towards smokers than Brits or Americans. (Hockney’s devotion to smoking runs a close second to his devotion to art.)

But also, at La Grande Cour, he could paint all day, every day, from sunrise to bedtime at 9:30 p.m., except on full-moon nights, when he would go out to paint the moon. At 82, far from slowing down, he seems to be speeding up, producing at least one and sometimes two iPad drawings a day. And best of all: ‘Everything is here! Every kind of tree — apple, pear, plum — and you see the sky all around you… I’m living in the middle of my subject here.’

Hockney and Gayford’s exchanges are infused with their deep knowledge of the history of art. Hockney says that Rembrandt told his students not to travel, even to Italy; Gayford says that Constable’s favorite subjects included ‘willows, old, rotten planks, slimy posts and brickwork’. Hockney talks a lot about color. He thinks that British painting got lighter and brighter from the 1960s onwards; when he was growing up, it was all dark brown.

He is always attentive to pigments. Most paintings, he says, darken with age, though he reckons his have stood up well for half a century or more. But he thinks Warhol’s screen prints have darkened. Nineteenth-century artists were wary of green because it was fugitive and often turned brown. Constable shocked the Academy by using so much of it, but Turner avoided it. The most expensive paint has always been lapis lazuli blue. Renaissance artists liked to use it for the Virgin’s dress, but would charge extra for it. Hockney bought a tube of lapis a few years ago, but was disappointed. It wasn’t blue enough — it wasn’t Hockney blue.

Most of Hockney’s early Normandy paintings are of trees and hedgerows and seem like a natural continuation of his Yorkshire paintings. But he gradually adds other subjects — most interestingly and successfully, the stream at the bottom of his garden. The last painting in the book is of the stream in November last year and is so vigorous and detailed you feel you could fish in it. With his California swimming pool pictures, he was interested in the reflections and the splash; now he’s interested in the flow of water, the ripples and eddies as it runs against obstacles.

At the end of last year, he announces that he will stay another year — and J-P, who knows him well, mutters: ‘Don’t listen to him. He’s going to do the next 10 years!’ I hope so. Perhaps his stream in Normandy will become as celebrated as Monet’s lily-pond. This is a charming book, and ideal for lockdown because it teaches you to look harder at the things around you.