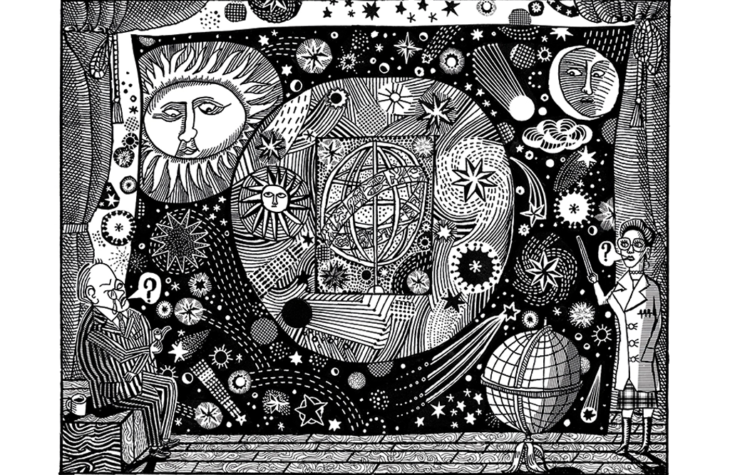 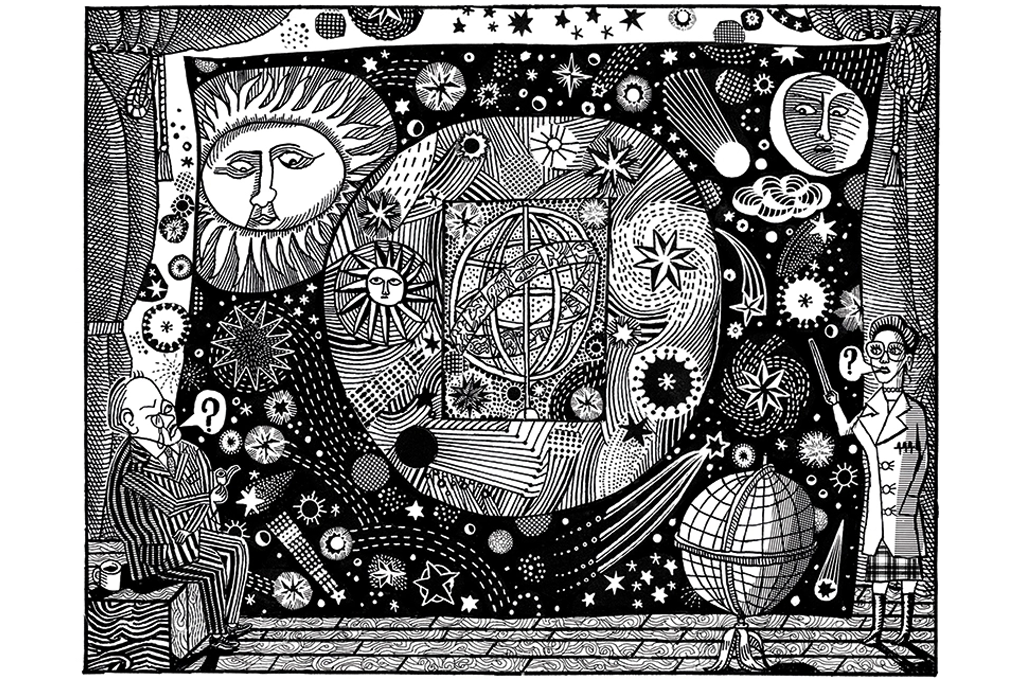 When NASA launched the James Webb Space telescope on Christmas Day in 2021 its goal was to shed light on the wonders of the universe. It’s delivering on that promise: since the summer we’ve had a steady stream of stunning images of dying stars, distant planets and colliding galaxies.

Researchers expected the telescope’s data would support the Big Bang theory. But it has captured images so far back in time, revealing the existence of galaxies so old, that the very origins of the universe have instead been called into question.

"I find myself lying awake at three...

When NASA launched the James Webb Space telescope on Christmas Day in 2021 its goal was to shed light on the wonders of the universe. It’s delivering on that promise: since the summer we’ve had a steady stream of stunning images of dying stars, distant planets and colliding galaxies.

Researchers expected the telescope’s data would support the Big Bang theory. But it has captured images so far back in time, revealing the existence of galaxies so old, that the very origins of the universe have instead been called into question.

“I find myself lying awake at three in the morning wondering if everything I’ve ever done is wrong,” said Allison Kirkpatrick, an astronomer at the University of Kansas, after seeing the first images from the James Webb telescope. She isn’t alone. Similar sentiments have been picked up by folk with an ax to grind about the Big Bang theory. In particular, the “independent scientist” Eric Lerner, who has long advocated for an alternative model of cosmology, in August wrote an article titled “The Big Bang didn’t happen.” His piece went viral. 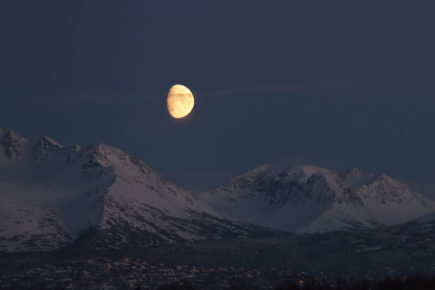 Among other things, Lerner claims that the galaxies captured by the James Webb telescope are too old and too numerous to be compatible with the Big Bang hypothesis on the grounds that it is impossible for galaxies as large as the Milky Way to form in just a few hundred million years. The evidence, he says, points to a non-expanding universe, not an expanding one.

That would mean big trouble for the Big Bang theory if it were true, but the truth is more interesting than the hype. The Big Bang (which took place almost 13.8 billion years ago) has not been disproven by the James Webb telescope. Instead, its images have given scientists a chance to rethink how the cosmos has evolved.

One of the most common misconceptions of the Big Bang theory pertains to its very definition. Rather than being a theory of the universe’s origin, it’s a theory of what happens after the moment of creation (if indeed there was one).

The dawn of modern astronomy came and went. Though beliefs around the movement of stars changed, and it was understood that local details might get altered in any random corner of the cosmos, the universe, as a whole, was considered permanently unchanging. Even Albert Einstein assumed that the universe now must look like the universe a trillion years in the past and future.

Then, in 1928, discoveries by an American astronomer caused this surety to waver. Data from Edwin Hubble’s telescope appeared to show that galaxies were, in fact, all rushing apart, avoiding one another as if they had the plague. Jesuit astronomer Georges Lemaître drew a different conclusion from Hubble’s observations. He believed that Einstein’s theory of general relativity could be used to show that the galaxies weren’t moving apart through space. On the contrary, it was space itself that was expanding and the galaxies were simply being carried along with it.

Lemaître noted that the universe may have existed in a pre-expansion state. He described this state of the universe as a “primeval atom,” existing for immeasurable aeons before it was somehow set in motion.

Alternative theories were floated by astronomers keen to resurrect a ‘timeless’ picture of the cosmos. This included a model by Fred Hoyle, a British astronomer, who ridiculed the idea that the universe’s expansion began all at once, in what he deridingly coined “a big bang.”

Then, in 1964, a truly revolutionary discovery was made. Two astronomers, Robert Wilson and Arno Penzias, were using a radio telescope designed to examine satellite communications. They encountered a strange phenomenon: when they directed their telescope at any point in the sky, they found a weirdly persistent microwave signal. There was no point in the sky from which this signal did not emanate.

They began to look closely at the idea that the universe had been very different in the past than it was now. This was implied by Lemaître’s idea and had been picked up in the early 1950s by two physicists, Ralph Alpher and George Gamow. Alpher and Gamow were building a model of cosmic history where the universe began in an incredibly hot, dense state.

Gamow’s models predicted that, approximately 300,000 years after the universe started expanding, space filled with a particular kind of electromagnetic radiation as matter particles cooled and changed their interactions. Not only that, this radiation would persist for ever, a kind of “fossil light.”

And it was this “fossil light” that Wilson and Penzias inadvertently picked up in their radio telescope. All the pieces of the jigsaw were perfectly slotting together. Wilson and Penzias had made an insurmountable breakthrough. The universe did indeed have a history. It had once expanded from a type of “primeval atom,” and it had continued to expand since. In doing so, it had left behind traceable electromagnetic emissions, which silently polluted the sky, invisibly goading desperate researchers, waiting to be found by technology that was advanced enough.

This discovery — known in scientific circles as “Cosmic Microwave Background radiation” — established cosmology as a science, and the Big Bang theory as the foundation for all explorations of cosmic evolution. Since then, observations have further supported its veracity, and more details have bulked out the theory. And with these, the James Webb telescope enters the story.

To be a successful theory of cosmic evolution, the Big Bang must explain all aspects of how we got from back then to now. How did that transition occur? When and how did the cosmos start to form all the structures we see today? When did the first stars form? And when did the first galaxies form? Using ever more powerful supercomputers to simulate cosmic history and ever bigger telescopes to test the results of those simulations, researchers have developed a remarkably complete story.

One of the most important aspects of that story is how stars and black holes began forming before galaxies did. The explanation for this is termed “hierarchical structure formation,” a sub-theory, if you like, of the Big Bang. Smaller structures, like stars, form first, it says, which then collect to form larger structures like galaxies. Many of this sub-theory’s predictions were confirmed by the Hubble Space telescope, which could look back to the era of galaxy formation. But Hubble’s telescope had limitations, and astronomers needed to push back even further in time.

Then this year along came the James Webb telescope, built to see the first generation of stars emerging just a few hundred million years after cosmic expansion began. Excited astronomers watched and waited for the telescope to confirm their predictions. And then it didn’t.

Instead of showing the formation of just a few small stars, which would satisfy the timeline of the hierarchical structure formation theory, the telescope revealed an anomaly. Whole galaxies had existed far before anyone had expected them to. What did this mean for the history of the universe, then?

When Allison Kirkpatrick questioned whether “everything I’ve ever done is wrong” she was referring to this sub-theory, the one of galaxy formation. Somehow the universe is building galaxies earlier and faster than our theories predict. It’s like going to a nursery to visit your newborn and finding a room full of teenagers. Disturbing, to say the least.

But it’s also great news. This is what should happen in science. New data should challenge our theories and force us to confront false assumptions we hadn’t even known we’d made. The James Webb telescope has done that for cosmologists. And, as more data pours in, there are no doubt going to be a lot of happy, sleepless nights as scientists try to understand exactly what the telescope is telling them about the early cosmos.

Does any of this challenge the Big Bang itself? Not even by the tiniest sliver. If we know the Big Bang to mean the idea that the universe started out in a smooth, hot, dense state that was set into expansion which led to evolution of structure, then no, the Big Bang has not been disproven. If anything, it’s proven the most basic feature of the theory: cosmic evolution. The results of the James Webb telescope reinforce the idea that the universe does have a story and, most importantly, we are somehow learning to tell it.