The New York mayor has been in office a year. A sense of unease still pervades the five boroughs 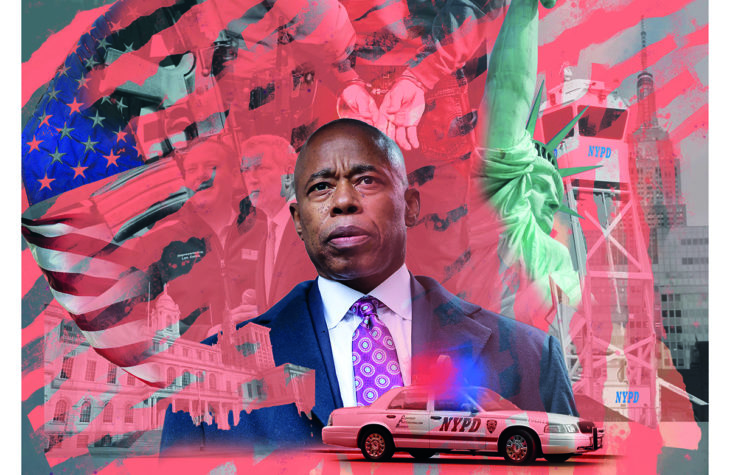 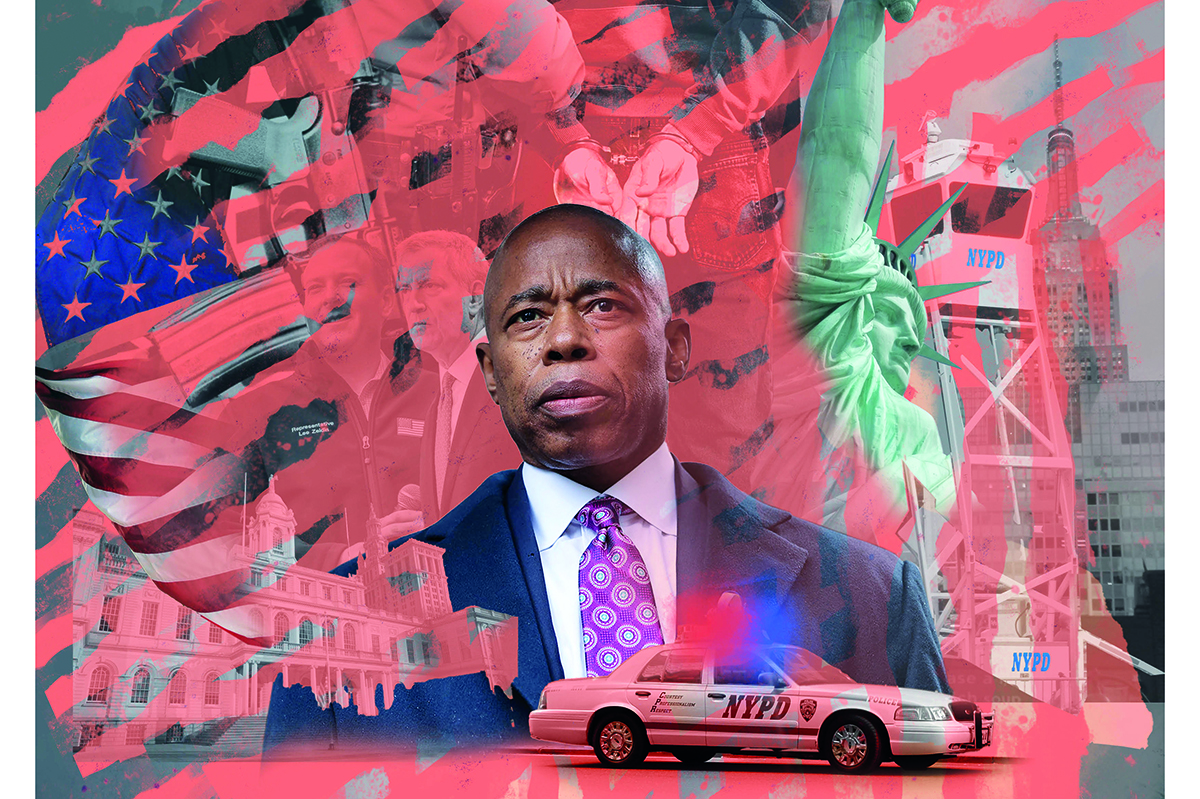 New York City mayor Eric Adams’s first day in office started with a call to the NYPD. Waiting for the J train to take him from Brooklyn to City Hall, Adams spied three men beginning to tussle. When punches began flying, he dialed 911. He didn’t offer a name until the end of the call: “Adams, Mayor Adams.”

The moment, so perfect as to seem choreographed, epitomized Adams’s agenda. Predecessor Bill de Blasio destroyed his credibility with the police department over his eight years in office. Adams, by contrast, was a former NYPD captain who had...

New York City mayor Eric Adams’s first day in office started with a call to the NYPD. Waiting for the J train to take him from Brooklyn to City Hall, Adams spied three men beginning to tussle. When punches began flying, he dialed 911. He didn’t offer a name until the end of the call: “Adams, Mayor Adams.”

The moment, so perfect as to seem choreographed, epitomized Adams’s agenda. Predecessor Bill de Blasio destroyed his credibility with the police department over his eight years in office. Adams, by contrast, was a former NYPD captain who had run on his pedigree, rejected his opponents’ calls to defund the police and promised to revive the plainclothes anti-gun unit disbanded by de Blasio amid the George Floyd protests.

The message worked. Homicides, shootings and car thefts had all spiked in New York City in 2020 and 2021, much as in other major cities. Responding to this, voters said in a poll a month before the 2021 Democratic primary that crime should be the next mayor’s top priority. A plurality picked Adams as the best on the issue. Come primary day — the real election in true-blue NYC — he won big in the neighborhoods where most of New York’s shootings take place, part of a blue-collar coalition that swept him to power. 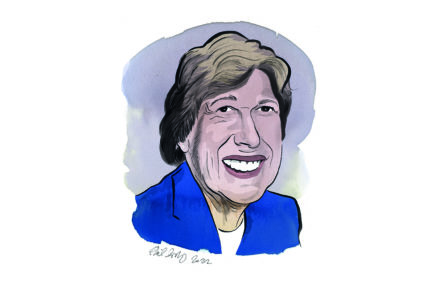 But it’s now been a year since Adams took office — and a sense of unease still pervades the five boroughs. Crime is still up, including the violent offenses that spiked in 2020 and property offenses that were down throughout the pandemic. To critics, this is proof that Adams’s “tough-on-crime” promises were hot air, or that his preferred strategies don’t really work.

The reality is more complicated. Adams really has taken steps toward cutting crime in the city. But the data show that it’s an uphill battle, thanks both to years of “reform” slowing the criminal justice system, and to a police force that’s struggling to be active enough to really bring crime under control.

It’s hard to say that Adams hasn’t stuck by his “tough-on-crime” promises. He restored the plainclothes units, albeit in “modified” uniforms; announced a citywide “crime and quality of life initiative” which deployed officers to more proactively police the streets; and surged NYPD officers in the subway system. The NYPD claimed some success over the last few months of 2022, as shootings and homicides dipped below where they were a year ago.

But they’ve made up only so much lost ground. There were 379 homicides through late November 2022, NYPD statistics show. That’s down 12 percent from the same time last year, but it’s already — with a little more than a month left in the year — 19 percent more than in all of 2019. A similar pattern obtains for shooting victims: 15 percent fewer than last year, but 48 percent more than in all of 2019. Violence is down, but still up since recent lows.

Property crime, meanwhile, is exploding: robberies, burglaries, larcenies and car thefts are all up 25 to 35 percent over last year. Some of that is rebound from the Covid period of 2020 and 2021, when fewer people were out and so opportunities were fewer. But it’s much worse than 2019, with thousands more of all these offenses reported to the NYPD through September of 2022.And the numbers don’t quite capture how New Yorkers are feeling. Businesses are skittish about rising downtown crime. A surge in violent incidents on the subway — including a mass shooting in April — is part of why ridership is still below pre-pandemic norms. And in November, Republican Lee Zeldin’s surprisingly narrow loss in the race for governor was thanks in part to an exceptional showing in the city. Zeldin’s campaign, of course, was all about crime.

This crime increase is, as mentioned, not unique to New York. Lots of cities saw a spike in violence in 2020 and 2021, though the increase in property crimes is rarer. But New York City is usually considered an outlier for safety, once feted for its dramatic crime drop as “the city that became safe.” What’s gone wrong in the Big Apple?

One explanation is the criminal justice reforms that Albany has passed in the past six years. The NYPD and Adams have blamed the state’s infamous bail reform, which prohibited judges from setting cash bail for many offenses, for creating a revolving-door justice system and putting serial offenders back on the street.

Bail reform probably isn’t the whole of the story, though. State data indicate that the probability of post-arraignment rearrest increased substantially following bail reform. But those increases were concentrated upstate, while rearrest rates barely changed in the city. That likely reflects the fact that New York City judges were already fairly lenient before reform. That doesn’t mean that bail reform doesn’t need fixing (it does) but it’s hard to blame it alone.

Bail reform isn’t the only recent change, though. “Raise the Age,” which shifted most sixteen- and seventeen-year-old defendants out of criminal court, drove up young people’s re-arrest rates. Reforms to the criminal discovery process have reportedly hamstrung prosecutors’ offices. And parole reform has emptied Rikers Island of parole violators, including hundreds detained for new violent offenses.

Even absent these reforms, though, the city would likely still have problems. Why? Because despite Adams’s agenda, the NYPD is still way less proactive than it used to be.

In this period, of course, crime fell dramatically. But the ratio of arrests and summonses to crimes (as measured by the number of reports of crimes lodged with the NYPD) fell too. Under Bloomberg, the NYPD reported an average of 1.76 arrests or summonses for every complaint of a crime. Across de Blasio’s whole tenure, the average is 0.92; in 2019, it was just 0.66.

Adams talked like the new Bloomberg, but by these measures he looks worse than de Blasio: in the first nine months of the Adams administration, the NYPD continued to make about as many arrests and summonses as it had been — about 15,000 and 5,000 a month. But because crime spiked, it averaged only 0.47 summonses or arrests per complaint.

In short: the NYPD is still far less active than it was during the Bloomberg era. What’s behind the slowdown?

“The machine gets turned off,” Kenneth Corey, the recently retired chief of department of the NYPD, said. “And it’s easy to turn off. It’s a little harder to start, particularly when you have cops that are wary of potential consequences.”

As Corey tells it, civilian leadership — particularly the City Council — has been explicitly hostile to proactive, quality-of-life enforcement for years (“the message is made clear to police officers that there’s no appetite for them to engage in this type of enforcement”). When the call came to start back up, many on the force were, and are, therefore wary. They worry that city leaders won’t have their backs, or that unsubstantiated allegations will chase them after they leave the force — a particular issue since in 2020 the state legislature repealed the law which kept complaints against public safety officers confidential.

“That’s the big change in policing over the past decade,” Peter Moskos, a professor at CUNY’s John Jay College of Criminal Justice and former Baltimore cop, said. “When I was a cop, you had to screw up. It could be an honest mistake, that’s the thing. But you did have to screw up to get in trouble. And now you can do the right thing and get in trouble.”

The problem is compounded by a shrinking force. The NYPD has about 3,500 fewer officers than it did two years ago, according to Corey. Some of that was expected — the NYPD recruited a historically large class in the early 2000s, many of whom are now retiring. And Corey maintains that the department is not struggling to hire. But a hostile policy environment is exacerbated by other cities poaching NYPD officers, who struggle amid surging inflation and New York City’s sky-high cost of living.

Some activists observe that even as police activity fell in the de Blasio years, crime fell too. Why, they inquire, should we therefore conclude that what’s needed right now is more cops?

New York City’s extraordinary crime decline, it’s true, was sustained for many years not just by aggressive policing, but also by the sort of societal self-control — what criminologists sometimes call “collective efficacy” — that was made possible by that policing. Even with less police presence, New Yorkers still had control of their streets.

But then, of course, came the pandemic and protests. “In the main, the reason why our streets have been so safe is that there is some sense of human connection and obligation,” Elizabeth Glazer, who directed the Mayor’s Office of Criminal Justice under de Blasio, said. “It’s what’s called informal social control. And when that disappears, all rhythms of work and play, I do think it changes how ready people are to break the rules.” The city, in other words, could be safe with far fewer police officers, so long as it still had full streets and subways and a busy business life. Take those away too, and crime runs rampant.

If anything, then, the Adams administration has much work left to do if it wants to “restart the machine.” Returning NYPD activity to even 2019 levels would be a good start, though more activity is probably needed. The City Council could also act to reduce pressure on the PD, for example by amending its chokehold ban. And Albany, hopefully chastened by a strong Republican showing in November, might finally move to fix some of its reforms.

Without more effort, though, New Yorkers will struggle to retain control over their city. Real “tough-on-crime” hasn’t yet been tried: time to see what it can do.