Let’s not hear it for the little guy 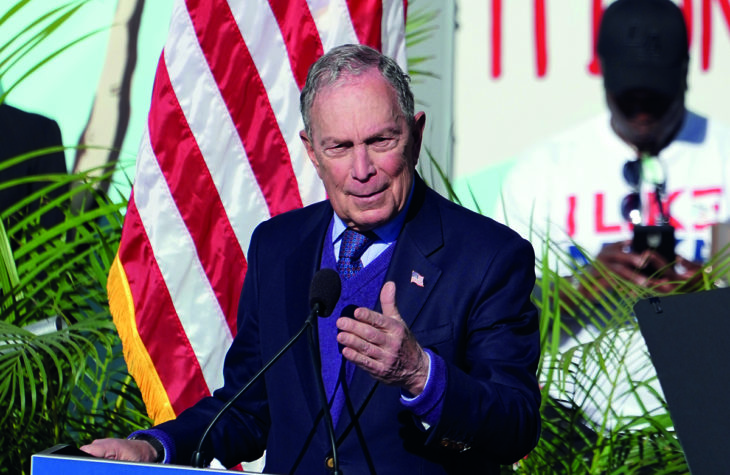 In that great movie Citizen Kane, Orson Welles makes it big as a newspaper owner-publisher and then runs for governor of New York. He fails because of hanky-panky with a singer, and we all know the rest. In John O’Hara’s novel Ten North Frederick, the protagonist has aspirations to be president but he, too, falls short. The characters I’ve just mentioned are, of course, fictitious. Mike Bloomberg is not. Nor are his fifty billion big ones.

Bloomie recently wrote that unlike Trump he did not inherit a...

In that great movie Citizen Kane, Orson Welles makes it big as a newspaper owner-publisher and then runs for governor of New York. He fails because of hanky-panky with a singer, and we all know the rest. In John O’Hara’s novel Ten North Frederick, the protagonist has aspirations to be president but he, too, falls short. The characters I’ve just mentioned are, of course, fictitious. Mike Bloomberg is not. Nor are his fifty billion big ones.

Bloomie recently wrote that unlike Trump he did not inherit a fortune. That he did not. But nor, really, did The Donald. The latter’s father was a comparatively small-time Brooklyn and Queens real-estate developer. The irony is that in 2016, Trump spent $66 million of his money and $277 million in donor funds. Hillary spent nearly $600 million and came in second. Tom Steyer has already spent $140 million of his fortune in order to be bottom of the totem pole in the boring Democratic debates. Bloomberg has spent more than $275 million and plans to lavish up to another $750 million in advertising.

Will one billion big ones become the key to the White House? And if so, does it mean that from now on the richest man — or woman — among us can become the world’s most powerful one? Bloomberg is the first person to think so and put his money where his mouth is, just as he did in New York City, where as a three-time mayor — his third term would have been illegal, if he hadn’t managed to change the rules to fit his agenda — he unabashedly rode Rudy Giuliani’s anti-crime success, claiming it as his own.

The media, needless to say, are very pro-Bloomberg. He’s an old hand at stroking reporters and television executives, and few of them have raised the fact that it was Rudy who inherited a lawless city with crime out of control and over eight years, via his ‘broken windows’ theory, turned Gotham into the safest big city on the planet.

Transforming a Wild West town into a peaceful Swiss village takes a long time — eight years to be exact — and Bloomie was smart and opportunistic enough to keep Rudy’s people and structure in place. And to take full credit for himself. The other major accomplishment of his three administrations was to sell much of the place to real-estate developers, changing the city from a vast congregation of different neighborhoods into a colossus of expensive glass towers owned, but not inhabited, by foreign billionaires.

He has since apologized time and again for following the Giuliani principle of stop and frisk, the chief weapon against crime. By so doing, he has established his credentials with those people at the New York Times whose main enemies are white law-abiding males. Now 78 years of age, Bloomberg was of his time — a lower-middle-class Jewish man who beat the Vietnam draft with flat feet, just as podiatric problems kept The Donald safe back home. Bloomberg was not a popular boss in his business. He was said by some to have been a bit of a bully and to have cracked a lot of jokes that today would land him in deep doo-doo. But he was also smart enough to make things good with those he might have offended. Potential president Mike was a subtle social climber who became a member of one of the most exclusive Wasp clubs by — rumor has it — pushing business towards broken-down Wasp committee members. (He proudly wore the tie and suspenders of said club until he ran for mayor, then he dropped both the club and his suspenders.)

If he wins the Democratic nomination, which I think he will, he will take Mayor Pete or Amy Klobuchar as his running mate, the rest being as old as he is and beginning to look like those creepy Soviet leaders we saw in old newsreels. (Mind you, Mike would have made a perfect Soviet commissar: short, mean and with a deadly stare.)

Bloomberg’s two daughters are not known for their beauty, and I’m told by a couple of people who know them that they’re not as nice as they look. (Georgina, the younger, owns a string of expensive horses, and is a professional equestrienne.) Bloomberg recently wrote that people might call him a traitor to his class because he will raise taxes on corporations and the very wealthy. He then compared himself to Franklin and Theodore Roosevelt. The closest I ever got to the bum was once outside a downtown tavern where I tried to blow smoke in his face. Had I known, I would have simply said to him, ‘Bloomberg, you are no Roosevelt, not even close.’

OK, this writer is no admirer of a man I think is a phony, but I have to give credit where it’s due. His smoking ban was right, but like all people of very short stature and very deep pockets, he has a Napoleon complex. He wants to run our lives, and here’s where we part.

And in any case, Trump will not easily be beaten, the media’s relentless campaign against him notwithstanding. Family incomes are up and 59 percent of Americans think that they are better off now than they were a year ago. Crazy Bernie’s message that the middle class is getting killed is like those crazies announcing the end is nigh. Economic gloom is not on the horizon, so Mike is running on inequality. He should know a thing or two about that.