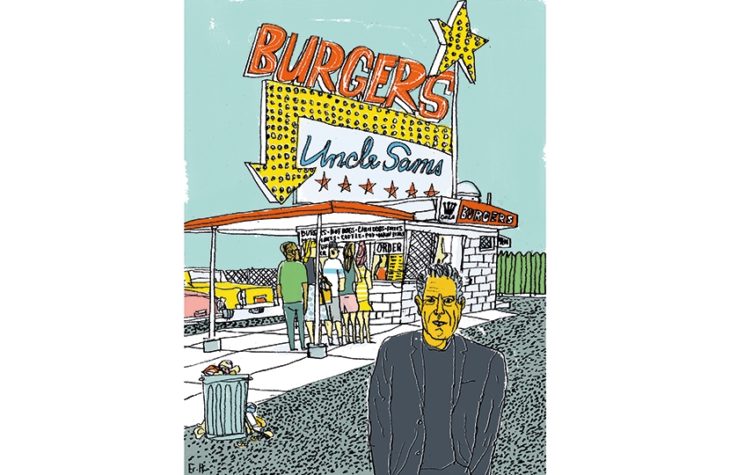 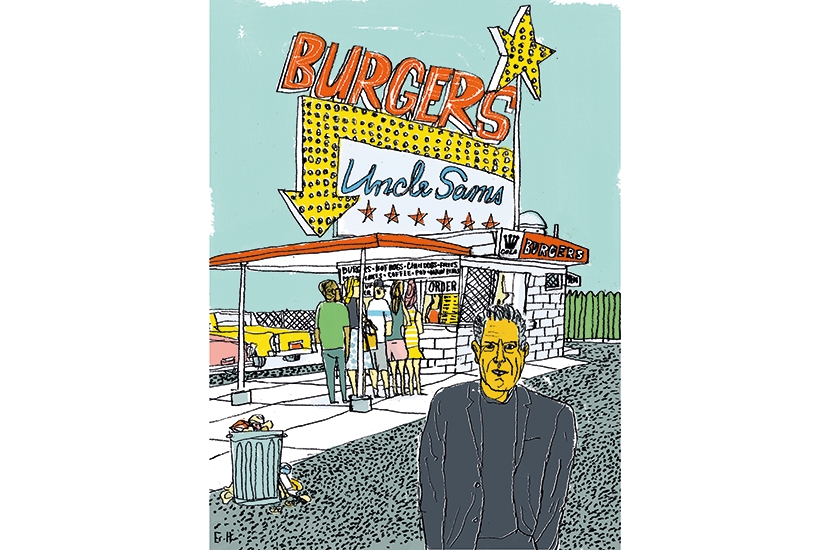 There’s a biopic released this summer, Roadrunner, about the late great chef, writer, bon viveur and TV presenter Anthony Bourdain. It recounts the many invaluable lessons Bourdain taught, such as: never eat the lower colon of a warthog; never order fish in a restaurant on Monday (it will probably be three days old); and, most of all, the American Dream is over.

This last fact may seem jarring. Bourdain was a proudly patriotic American. However, I firmly believe he reveals this truth in the 36th episode of his splendid food-and-travel TV show, No Reservations.

In this particular episode Bourdain...

There’s a biopic released this summer, Roadrunner, about the late great chef, writer, bon viveur and TV presenter Anthony Bourdain. It recounts the many invaluable lessons Bourdain taught, such as: never eat the lower colon of a warthog; never order fish in a restaurant on Monday (it will probably be three days old); and, most of all, the American Dream is over.

This last fact may seem jarring. Bourdain was a proudly patriotic American. However, I firmly believe he reveals this truth in the 36th episode of his splendid food-and-travel TV show, No Reservations.

In this particular episode Bourdain visits Cleveland, Ohio. In his boyish, enthusiastic way, Bourdain tries all manner of nosh. And all goes well until he sits down in a fast-food chain called Skyline and ‘eats’ a popular local delicacy called ‘Cincinnati chili’.

The best way to understand Cincinnati chili is to look at it. Briefly. The second best is to describe it: a splat of overboiled spaghetti, smothered in an eerily thin chili, then suffocated by shredded industrial cheddar, served with a side of three hot dogs, also interred under cheddar. The ingredients in the chili include cinnamon, paprika, Worcestershire sauce, vinegar, cumin and chocolate.

As he tries to down this cosmically disturbing meal, Bourdain doesn’t criticize — he rarely does. He simply murmurs that it is a ‘mutant hybrid’ and is ‘suspiciously orange’. But he has an expressive face. And his face says: ‘Jesus Christ.’ And then it says: ‘This is meant to be a Greek-Italian speciality. If you gave this to an actual Greek they would punch you in the eye.’

And this, I submit, tells a wider truth. OK, yes, we’re supposedly only talking about food here. And Europeans have always known American food can be ‘variable’. (I once went to a Walmart in Natchez, Mississippi, with a mighty dairy aisle full of cheese which, it turned out, had only four varieties: ‘blue’, ‘jack’, ‘sharp jack’ and ‘cheese shaped like characters out of Finding Nemo’.) But Europeans have generally had a love for American food — from burgers to BBQ to fried chicken. And going way beyond food, Europeans have largely revered America, which is why so many of us migrated there.

So this, then, is my question, provoked by Cincinnati chili: would we Europeans emigrate to the USA? Answer: no. Unless you have a brilliant job offer (or a place at Harvard), no sane western European should willingly move to the USA.

Why the discrepancy? Because American average wealth is hugely skewed by the vast incomes of the top 1 percent. Wealthy Americans are enormously richer than their western counterparts — but that, of course, means inequality, a problem in itself.

And it’s not just the money. It’s the lifestyle. Average Americans really have to work to make their marginally-better-than-European-incomes. For instance, Americans are not legally entitled to any paid vacation at all. None. There are 28 million Americans with zero paid vacation. Even if your US employer does allow you a smidgen of salaried holidays, it is that: a smidgen. For most Americans, five to 15 paid days is the best they can expect. Contrast with Germany, Austria, Spain, Italy (and so on) which guarantee 30 days or more.

This lack of downtime may explain why Americans drop dead earlier. Life expectancy in the USA is 78.54 years. In the UK, it is 81.26 years. Australia: 82.75 years. In Italy it is an impressive 83.35 years. Perhaps because the Italians would never consider eating chocolate in their cheesy-chili-pasta-vinegar-hot-dog-cinnamon-thing.

And what about health? Despite America spending more on health than any other country, World Population Review recently estimated that the USA has the 30th best healthcare system in the world, behind medical paragons such as Colombia and Morocco. And we’ve all heard the stories of people being bankrupted by US medical fees: an ambulance ride is $1,000, getting a bone fixed in the ER will cost $10,000. Of course you are meant to be insured, but 26 million Americans have no health insurance at all. Break a bone? Stay home!

Another good reason to stay home, if you’re American, is to avoid being gunned down. In 2020, guns killed nearly 20,000 Americans. In the same year in the UK, guns killed 33 Brits. Sadly, not all Americans have the option of cowering at home, because so many have lost those homes due to opioid addiction. Latest estimates reckon three million Americans are experiencing addiction. In 2019, 70,000 died from an overdose.

I don’t want to be too negative. There are still many wonderful aspects of America, from the glorious national parks to the dynamism of the cities, from the excellent universities to the world-class tech companies. Nonetheless, it is clear that countries which once aspired to an American life no longer do so. What sensible Irishman would move to Illinois? Why would a Norwegian decamp to New Jersey? What tempts an Italian to Cleveland to lunch at Skyline for the rest of her life? Not much.

Indeed, it strikes me that the movement should be the other way — at least politically. That is to say, Americans should be moving towards more ‘humane’ European capitalism, if they actually want better days. Perhaps this would be a sound policy for a future lefty presidential candidate. Give every American a passport (millions don’t have one). Then give them five weeks of paid vacation in Europe, so they can see how average Europeans live much nicer lives than average Americans. These Americans will then come home and vote social democrat for the rest of time, and they might even return with a decent spaghetti recipe.