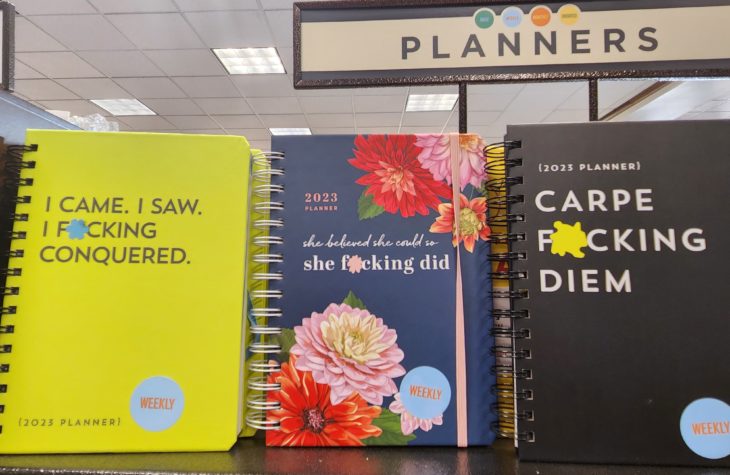 A display of aggressive planners at Barnes & Noble 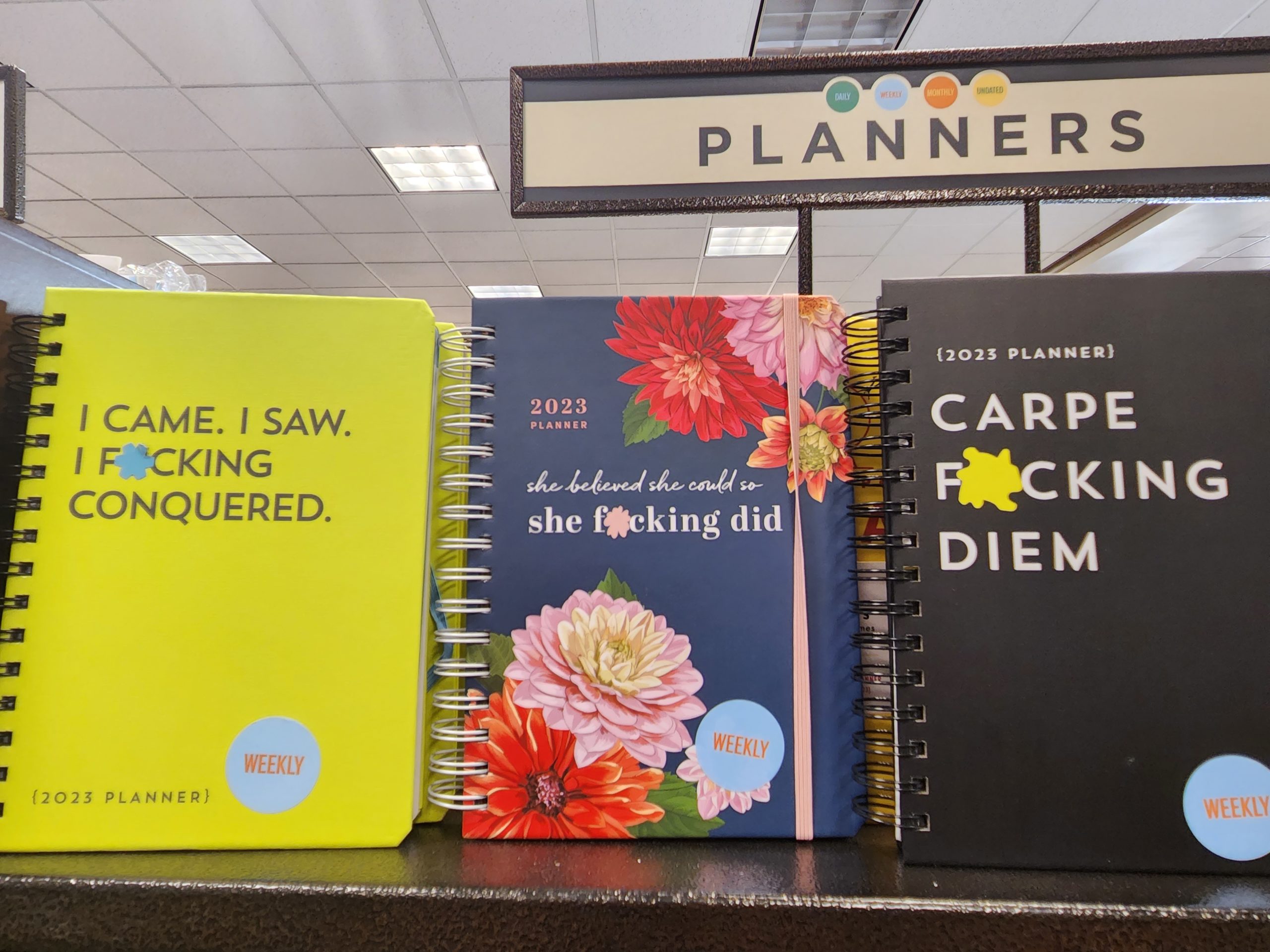 America is enduring a mental health crisis, and you need go no farther than your local Barnes & Noble bookstore to see evidence.

I was an avid journal-keeper for years and love all things paper, so I get a little giddy perusing the “stationery and gifts” section. Last weekend, however, rather than being energized by the prospect of filling one of those gorgeous, gilded, supple leather books with my most brilliant thoughts and sweetest sentimentalities, I was left feeling sad about the message sent by so many of the journals, planners, and gifts for sale. Judging...

America is enduring a mental health crisis, and you need go no farther than your local Barnes & Noble bookstore to see evidence.

I was an avid journal-keeper for years and love all things paper, so I get a little giddy perusing the “stationery and gifts” section. Last weekend, however, rather than being energized by the prospect of filling one of those gorgeous, gilded, supple leather books with my most brilliant thoughts and sweetest sentimentalities, I was left feeling sad about the message sent by so many of the journals, planners, and gifts for sale. Judging from the featured items, you’d be led to believe America is a nation of depressed, exhausted, anxiety-ridden alcoholics. And for the most part, you’d be right.

The first item that caught my eye was an air freshener fashioned after the El Arroyo Tex-Mex restaurant marquee sign in Austin, Texas, famous for its amusing one-liners. Though miniature, this replica sign spoke volumes about our nation’s attitude. It said: “You Is Tired, You Is Broke, You Is Adulting.” LOLcat dialect aside, the message is clear: there isn’t much joy associated with being a grown-up. 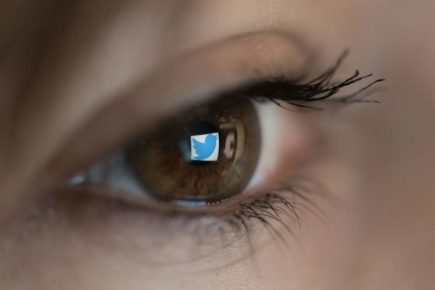 Things got bleaker the next display counter over. A set of Fred brand “Who’s Counting?” wooden countdown blocks gives people the option to count down how many “days since wearing pants.” The sample number presented was 254. The back of the box suggested users also count the “hours until day drinking.” Other possible countdowns include the number of days “since leaving the house” and “showering.”

A pair of socks for sale nearby said, “He sees you when you’re drinking,” and by “he” they meant Santa Claus, not God. Another pair said, “I’m dreaming of a White Christmas,” and by “white” they meant wine, not snow.

I moved on from alcoholism to something slightly less disturbing but still disheartening. The luxe Italian journals and charming notecards covered in vintage wildflower prints and classic Moleskines in every hue were still there to tempt me. But mixed among these delightful standbys were many more self-help-style books than I ever remember seeing. A sample of titles from the “Inner-Truth Journal” series: “I So Totally Got This,” “I’m Kind of Awesome,” “In My Humble Opinion,” “I’m Perfectly Imperfect,” and “I’m Gonna Keep My Heart Open.”

A few of the planners portended less a future of simple tasks and fun to-dos than sheer dread. “Choose Happy,” reminded one, implying that happiness, rather than being something that happens naturally, is a concept to be sought. Another book took what a more practical but much less bright approach with “not today, maybe tomorrow.”

A handful of planners were inexplicably aggressive — defiantly declaring that ambition is something to be angry about? — reading, “Carpe F*cking Diem,” “I Came, I Saw, I F*cking Conquered,” and “she believed she could so she f*cking did.” (I take the arbitrary upper and lowercase lettering as another indication of a manic populace adrift and unsure of itself.)

These and many more products struck me as a sign of where we are as a country: people are struggling mentally and practically. The fact that “adulting” is universally accepted as a state of perpetual poverty and exhaustion is emblematic of a broken system. Worse than that, though, is the bitterness hidden in plain sight at the bookstore. A passerby may not think much of a journal designed for “Self-Helping Myself” or a weekly planner to “Find Your Bliss” or a notebook that proclaims “I am my own muse” or a “be your own reason to smile” journal “dedicated to appreciating, encouraging, and loving yourself.” But there is an underlying layer of darkness. A notebook with a picture of a sharp cactus on it said “Free Hugs.” Why is this our attitude?

Working to overcome your struggles on your own is noble, and I know from personal experience that journaling is great therapy. Yet what my recent trip to Barnes & Noble suggested is that people are seeking more than simple introspection. We are more stressed-out and anxiety-ridden than ever, and rather than finding solace in one another, a social outing, or a good book, we are turning inward, venting to ourselves, staying inside, shower- and pant-less, and drinking ourselves to oblivion without much shame.

A confounding combination of you got this! self-helpery and oh well it’s okay to give up now! messaging shows just how messed up we all are. There are loads of journals encouraging you to “do something luxurious by treating yourself at various intervals,” and to “give yourself a high five by listing your most treasured accomplishments.” Then, at the Fred brand online store, you can buy an artistic puzzle that says “Shitshow” and a set of cross-stitch samples that allow you to “test your skills in needlework” by stitching such uplifting phrases as “I’m over it,” “I do what I want,” and “WTF.”

I’m not sure if our problems are bigger and more numerous now than they’ve ever been, if we’re spending more time dwelling on them or if we’ve just gotten worse at coping with them. It seems to be a combination of the latter two. Scarlet fever, World War II, and bedpans all seem worse than our present-day anxiety. What strikes me now, though, is how people seem to be crying for help, yet insulating themselves with a false pride that presents itself as mean-spirited jadedness toward their fellow man.

It’s sad that gloomy snark has become so pervasive. It’s also sad that rather than turning to their churches, their communities, their families and friends, to social outings, fulfilling careers, or to any of the millions of great books for sale at Barnes & Noble, people feel the need to be their own life coach for basic human functioning.

I moseyed on with a heavy heart from the stationery and gifts section to be cheered at the magazine stand, where The Spectator World print edition was on prominent display. Still, I wondered how we got to this point, and what to do about it. Looking up, I had my sign: a sizable group of customers was lounging in the bookstore café. Not a single person was reading a book or periodical. Nor were any of them interacting with each other.