Trump and the troops 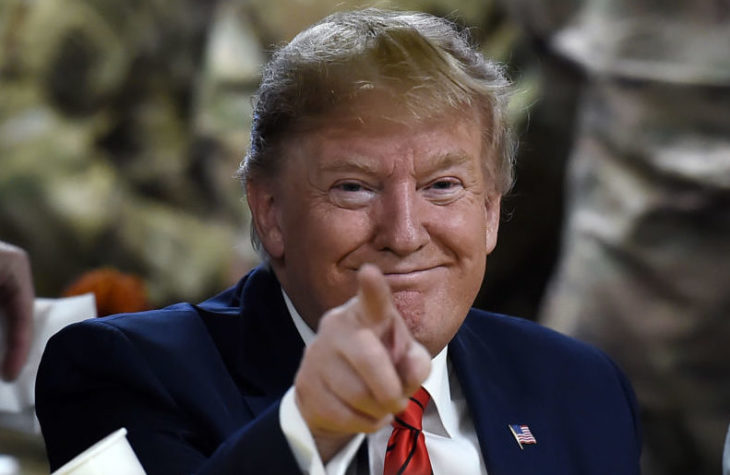 Trump and the troops

Thanksgiving Day, the most American of holidays, found President Trump performing one of the nation’s few remaining civic rites: supporting the troops. When the President secretly flew to Afghanistan to feed and thank servicemen at Bagram Air Base, he got a cheering hangar full of airmen in return.

Those turkey-stuffed troops were a captive audience, of course. Still, enthusiasm for Trump among American servicemen, both active-duty and veteran, seems to be one of the more genuine things about this surreal phase of American politics.

Thanksgiving Day, the most American of holidays, found President Trump performing one of the nation’s few remaining civic rites: supporting the troops. When the President secretly flew to Afghanistan to feed and thank servicemen at Bagram Air Base, he got a cheering hangar full of airmen in return.

Those turkey-stuffed troops were a captive audience, of course. Still, enthusiasm for Trump among American servicemen, both active-duty and veteran, seems to be one of the more genuine things about this surreal phase of American politics.

In polls, support for the president among veterans far outpaces that among Americans at large. Whenever Trump visits the troops, military leaders struggle to rein in the display of unauthorized MAGA paraphernalia. One former US Central Command planner described the support for Trump among much of the military as ‘downright cult-like’.

How is this possible? Trump, unlike the majority of his predecessors in the Oval Office, has never served a day in uniform. He stood out among a crowded field of Republican candidates in 2016 by being almost the only one to acknowledge that the Iraq War was a disaster — yet comfortably won the primary in veteran-heavy South Carolina a few days later. ‘The generals have been reduced to rubble,’ he told one audience later that year. ‘They have been reduced to a point where it’s embarrassing for our country.’

Matters have sprinted downhill since Trump took office. It would take a full volume of this journal to catalog his offenses against American civil-military norms; a few recent examples must suffice. In November alone, the president ordered the pardon of two soldiers convicted of, or awaiting trial for, crimes committed in combat. He intervened when the Navy attempted to take special-operations status from another convicted criminal, SEAL Eddie Gallagher, and lost his secretary of the Navy, Richard V. Spencer, in the process. Trump’s gamble is that the troops will think he always stands up for them, but not all servicemen are comfortable with such bold executive gestures. It doesn’t help that, at the same time, some of the president’s most craven supporters attempted to slander Lt. Col. Alexander Vindman, a decorated, combat-wounded veteran, by insinuating that he was a foreign spy.

The most senior brass, it seems fair to say, don’t love the boss. The end of Obama-era micromanaging and pusillanimity yielded a brief honeymoon for Trump. Early on, the new president had a trio of generals — Kelly, Mattis and McMaster — supposedly all but running the show. A senseless escalation in Afghanistan and the steady annihilation of Isis sustained warm feelings for a while. But all three men have since left the administration, pushed out or frustrated to the point of resignation.

Active-duty officers are, thankfully, still too professional, nonpartisan and fearful of punishment to voice their political opinions openly. The newly retired break ranks more easily. Every few months another one joins the fray and adds his voice to the chorus on cable news and the op-ed pages of the New York Times and Washington Post.

Somehow, as with all things Trump, none of it seems to matter. Even ‘Cadet Bone Spurs’ — a taunt publicizing Trump’s alleged draft-dodging — doesn’t stick. Three of our last four presidents avoided their country’s call during the Vietnam War. The exception, Barack Obama, was too young. The blooded and blue-blooded combat veterans, the Johns Kerry and McCain, fell short of the White House. McCain became both a punchline and a foil for Trump to the grave and even beyond — with no appreciable diminishment of the Donald’s popularity.

How, then, to account for the enduring military support of this thoroughly civilian Caesar?

Geography plays a role. Nearly half of the enlisted military hails from the South, in the Census Bureau’s rather generous definition of that region. A map of military under- and overrepresentation by state bears a strong resemblance to the stunning November 2016 result, albeit with Hillary’s fabled Midwestern ‘blue wall’ still holding firm.

The same is true, to a lesser degree, among the officers. The post-Vietnam flight of Reserve Officer Training Corps (ROTC) programs from the hostile Northeast to more bountiful southern and western fields has yielded an officer corps with relatively similar roots to its enlisted men. Officers as a whole have also become more blue-collar. A century ago, doctors’ and lawyers’ sons flocked to West Point. Today, the children of the upper class prefer picking up a scalpel to a sword, and would much rather sit before a Bloomberg terminal than a drone feed. Though ROTC is making a comeback in the Ivy League, you’ll still find more southerners than Yankees wearing lieutenant bars today.

Trump plays the jingoistic showman with aplomb. He exults in parades and medals. Victories, real or inflated, play well with military audiences. So do the pay raises that he eagerly trumpets to any uniformed crowd he can find. This plutocrat president has an innate and inexplicable grasp of the middle-class military psyche, as he had with Rust Belt voters in 2016. Trump has also kept a few of his promises. Despite moments of hesitation, he is steadily increasing the Defense Department’s budget and has often given military leaders a freer hand operationally, for better or worse.

And President Trump, despite his bluster, has avoided new wars while halfheartedly trying to end old ones. Few in uniform, aside from newly minted Marines raised on Generation Kill, want a new war in the Middle East. American veterans of the post-9/11 wars are admirably unwilling to lie to themselves about the wars they fought. A recent Pew poll found that, though largely proud of their service, 64 percent of veterans now think the war in Iraq was not worth fighting. Fifty-eight percent say the same about the war in Afghanistan.

There is one additional key to Trump’s military popularity: America’s generals, though lionized as never before, are emperors without clothes. As with every institution of American life, the gatekeepers are on life-support.

In 1950, President Harry Truman had to apologize to the Marine Corps for sourly (and rightly) asserting that it had ‘a propaganda machine that is almost equal to Stalin’s’. Four years later, it was Sen. Joseph McCarthy’s confrontation with the Army that finally broke his spell on America. Today, Trump’s defenestrations of his generals have had little impact on his popularity. Even the resignation of James Mattis, who possesses a near-Pattonesque mystique and is genuinely admired by many in the ranks, quickly became old news. Trump can ride roughshod over the institutional military because so many of its leaders symbolize professional and ethical failure.

The divide between the officers and what were once simply ‘the men’ is as old as the Republic. In 1894, at the dawn of the American Century, the US Army Officer’s Guide warned its readers that ‘Enlisted men are stupid, but extremely cunning and sly, and bear considerable watching’. Less official but more numerous were the darts slung back at the ‘perfumed princes’ of the officer corps.

Americans wouldn’t have voted so many generals to the office of president over the past 230 years if the stars hadn’t counted for something. During the past quarter of a century or so, however, our generals and admirals have reflexively defended, contributed to, even embodied America’s unremitting foreign-policy failure.

The United States hasn’t won a real war since 1991 — before the majority of those currently in uniform were born. The men and women who have fought the failed post-9/11 wars are well aware of this bitter truth. A ‘stabbed in the back’ or ‘triumph forsaken’ narrative mostly lands on deaf ears in the ranks. Those who spent a year of their lives trying to save Baghdad or create a functioning Afghan National Army will smile bitterly when the Lindsey Grahams tell them that they won the war but others ‘lost the peace’.

The generals, though, have done just fine. Just one, Marine Lt. Gen. Gregory Newbold, retired in 2002 partly in protest at Donald Rumsfeld’s disastrous plans for Iraq. The rest kept their doubts to themselves. Some went one better and became full-blown propagandists for ‘forever war’, probably through sincere overconsumption of Washington’s deadly conventional wisdom. Many of them still roam the District in business suits and digital watches, castigating the war-weariness of unworthy Americans. Some of the most august of these men have never been shot at.

When the uniforms come off, opportunities abound. There are Rolodexes to be exploited and sinecures to be won in the military-industrial complex. The more cerebral can find think-tank perches and mix business with pleasure. It might not be tech money, but selling planes to your Naval Academy roommate can at least net a winter home on the Gulf Coast and ensure your kids go to Southern Cal instead of Southern Miss.

For the handful of military superstars in winner-take-all America, the rewards are far richer. Airport nonfiction shelves, five- or six-digit speaker’s fees and even private equity jobs await. For these modern nabobs, victory isn’t a prerequisite to cashing in. Robert Clive and his fellow East India Company men at least had to break somebody else’s empire before they could gorge themselves. Our Clives just do a bit of damage to their own before the meal arrives.

Small wonder that while America’s troops must listen to their generals, her veterans increasingly feel no such compunction. The entirely justified storm over Trump’s war crimes pardons may yet change things. Tens of thousands of American veterans will suffer some form of psychological injury for what they did or had to do to the Iraqi and Afghan civilians they fought among.

Theirs are powerful voices against crossing an indelible line and normalizing atrocity. One needn’t be a commander to have a conscience; indeed, the reverse is nearer to the truth. Whether most regular American soldiers will revolt against the impropriety of the pardons or feel the continued lure of Trumpism remains to be seen.

America’s relationship with her military is unique and will remain so. The country was founded in war and has been intermittently run by former captains and generals, yet several Founding Fathers had views on a standing military that wouldn’t be out of place at an anti-war Code Pink rally today. President Trump may survive and endure as the reductio ad absurdum of that most hollow of 21st-century American imperatives: ‘Support the troops.’