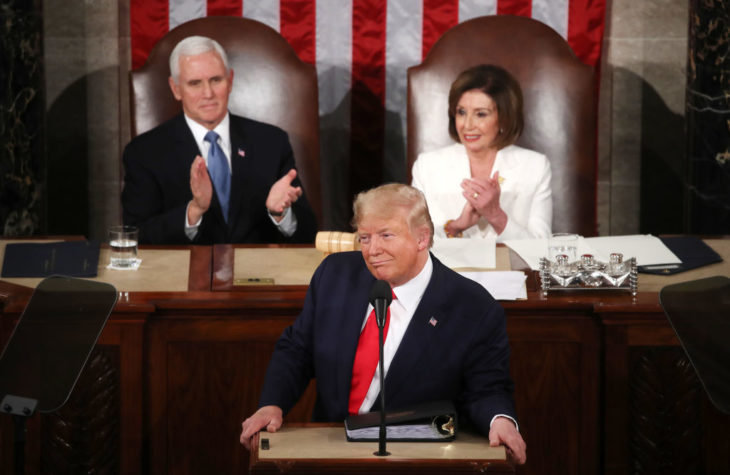 Donald Trump speaks in his fourth State of the Union address

One of the many things that F. Scott Fitzgerald said that sound good but isn’t true is this: 'There are no second acts in American lives.' Consider the life of Donald Trump. Five years ago he was a dubious real estate developer and professional celebrity. Now he is not only president of the United States, but he is, three years into his first term, the most ostentatiously successful president in memory. Donald Trump is a walking refutation of what is perhaps Fitzgerald’s second most quoted line.

Possibly Fitzgerald’s first most quoted line is this: 'The test...

One of the many things that F. Scott Fitzgerald said that sound good but isn’t true is this: ‘There are no second acts in American lives.’ Consider the life of Donald Trump. Five years ago he was a dubious real estate developer and professional celebrity. Now he is not only president of the United States, but he is, three years into his first term, the most ostentatiously successful president in memory. Donald Trump is a walking refutation of what is perhaps Fitzgerald’s second most quoted line.

Possibly Fitzgerald’s first most quoted line is this: ‘The test of a first-rate intelligence is the ability to hold two opposing ideas in mind at the same time and still retain the ability to function.’ That isn’t true, either. On the contrary, espousing or embodying contradictory ideas is generally a mark of pedestrian intelligence, on the one hand, and defective character on the other. In this context, uncharitable people might be inclined to adduce people like Jerry Nadler, Adam Schiff, and Eric Swalwell (remember him?). They spout certain platitudes about the importance of Constitution, the rule of law, etc., but then do things that utterly betray their fine sounding sentiments.

Donald Trump’s State of the Union Address tonight brought both of Fitzgerald’s sayings to mind. The announced theme of the evening was ‘the great American comeback’. And the president indulged in a litany of what that comeback has encompassed. But as in his 2018 and 2019 State of the Union addresses, a major theme of his remarks was unity: the importance of working across the aisle to achieve what is good for the whole country, not just one party. In 2018, in a column called ‘Trump restores the We’, I wrote that a major theme of the evening was the call to put aside ‘the partisan passions that divide us in order to go forward as a people united in the goal of making a better America’.

In 2019, the president sounded a similar note. The choice before us, he said, was between the politics of revenge, resistance, and retribution, on the one hand, and cooperation, compromise, and the common good, on the other. ‘Victory,’ he said ‘is not winning for our party. Victory is winning for our country.’

It goes without saying that the president’s conciliatory words were met with hot, pouting resistance, not only from the Women in White but also from a nearly universally hostile and contemptuous media.

It is a strange situation. The anti-Trump establishment bemoans the bitter partisan divisions that poison our civic discourse. They scream at the sky, invoke Adolf Hitler, and charge that the president was operating ‘concentration camps‘ on our southern border. Meanwhile, Donald Trump enacts policies that have given Americans the best economy in generations, with tax cuts, a booming stock market, record low unemployment, rising wages, especially at the lower end, where wages have risen some 16 percent since Trump took office. We really have seen a ‘blue-collar boom’, as he said tonight, and there is more to come. ‘I keep my promises,’ the president said, ‘We did our job.’

Business owners and entrepreneurs also have much to celebrate. President Trump has engineered a more rational and business-friendly regulatory environment. He has resuscitated the military, which had suffered seriously decline under Barack Obama, pouring billions into its revival. He has made America energy independent: we are now the world’s largest producer of oil and natural gas, free from the blackmail of the Middle East. And he has all but stopped the flow of illegal immigration. ‘The United States should be a sanctuary for law-abiding Americans,’ he said tonight, ‘not criminal aliens’. Hurrah for that.

President Trump’s nearly 200 judicial appointments — to say nothing of his two Supreme Court picks — have gone a long way towards restoring the judiciary as the branch that glories in the Constitution not its power to impose a left-wing agenda by judicial fiat.

How odd that Donald Trump, of all people, the bumptious, thin-skinned outsider should turn out to be the ambassador of both extraordinary prosperity and (speaking of extraordinary) a vision of unity that is at once humble and accommodating.

I know, I know: the word ‘humble’ and the name ‘Trump’ sit uneasily in the same sentence. But read or listen to his State of the Union speeches. Trump proudly retails his achievements. But he also humbly affirms the reality that he is working for and that is much larger than any individual.

The State of the Union address this year was full of touching moments. For me, one of the most touching was the president calling out the great talk show host Rush Limbaugh, who just Monday announced to the world that he had been diagnosed with advanced lung cancer. The president first said that Rush would be receiving the nation’s highest civilian honor — the Presidential medal of Freedom; he then had his wife Melania present the honor on the spot, cinching the pendant around the teary commentator’s neck for all to see.

Donald Trump wasn’t a reality TV host for nothing. He understands drama. So not only did Rush get his Medal of Freedom, but a woman with two young children, whose husband was away in Afghanistan on his fourth deployment, suddenly, unexpectedly got her husband back. The Commander in Chief had ordered the solider returned from Afghanistan. At the agreed upon moment, he came striding down the aisle to embrace his wife and children. Ilhan Omar, who came to the event to represent ‘resistance’ against an ‘illegitimate’ president, just sat there.

Once again, the Democrats were falling over themselves to exhibit their rudeness. One one side of the chamber, people stood up and sat down more often than congregants at a Catholic Mass. Most of the Democrats, however, sat stonily in their seats, snickering or staring at the floor while others around them cheered. Rep. Ayanna Pressley issued a snarling tweet explaining why she would give the State of the Union Address a miss. So did Rep. Maxine Waters. So of course did Rep. Alexandria Ocasio-Cortez. They and many others proudly displayed their lack of common courtesy and rudimentary civil behavior in order to grandstand and wallow in unrequited feelings of hatred and unstoppable pettiness.

There was, of course, a surreal element to the proceedings. For the last several months, the president has been subject to farcical, wholly partisan impeachment proceedings, in outrageous violation of everything the Framers intended in outlining that awesome safeguard. Donald Trump did not utter the word impeachment during his long speech. Nor did he allude to his Lilliputian tormentors. Wednesday, February 5, 2020, is the day that the Senate votes to acquit the president. Nancy Pelosi said that, no matter what happens, the ‘stain’ of impeachment would always be attached to the name of Donald Trump, a malignant ‘asterisk’ declaring his essential failure. I think that she is right that the history books will feature an asterisk about impeachment. But I predict that it will call attention not to Donald Trump’s bad behavior but to the craven, nakedly partisan efforts of an embittered minority to overturn the results of the 2016 election and forestall the outcome of the 2020 election.

One of most difficult things to achieve is an accurate estimation of one’s age while living through it. The many claims of everyday life, to say nothing of the static of received opinion, makes an unclouded assessment exceedingly difficult. Just so, it is difficult for us, I think, to form a just estimation of Donald Trump. His style is often so foreign to our idea of what a president should be. But not always.  A couple of years ago, when President Trump gave his great speech on foreign policy and national identity in Warsaw, I conjectured that his model was Pericles of Athens. Some people made fun of me for that — ‘comparing Donald Trump to Pericles? Are you kidding me?’ In truth I did not so much compare Trump to Pericles as suggest that Thucydides had provided a model in his account of the Pericles’s Funeral Oration in the first year of the Peloponnesian War.

Thinking back on it now, however, I suspect that I was too stingy with my praise. In my view, Trump’s major speeches — and tonight’s was no exception — will go as among the most eloquent and important in the nation’s history, just as his stupendous, world-changing achievements will be hailed as the fulcrum upon which the nation began to turn its back on the agenda of dependency that has hobbled this country at least since LBJ’s malevolent ‘Great Society’ programs created a permanent underclass and a parasitic bureaucracy to nurture it and feed upon it.

The irony, it is now clear, is that despite the endless carping of his opponents in the government, the media, and the corridors of elite power, Donald Trump has emerged from the unremitting ad hominem attacks stronger and more persuasive. Just a day or two back, a Gallup poll revealed the astonishing news that, notwithstanding the saga of impeachment, Trump’s approval ratings were higher than ever. Moreover, that same poll showed that the public’s view of the Republican party as a whole is now 51 percent, the highest it has been since 2005. The approval rating of the Democratic party, meanwhile, is sinking.

The president’s speech tonight was nothing less than magnificent. Notwithstanding the gnat-like creatures that swarm about him, he has continued to accomplish great things for America. ‘This nation is our canvas,’ he said in his peroration, ‘and this country is our masterpiece. We look at tomorrow and see unlimited frontiers just waiting to be explored. Our brightest discoveries are not yet known. Our most thrilling stories are not yet told. Our grandest journeys are not yet made. The American Age, the American Epic, the American Adventure, has only just begun!’