The US must punish Iran for aiding Russia 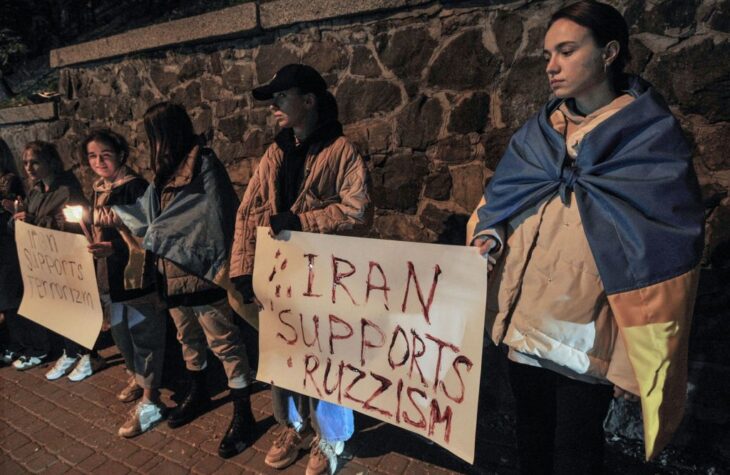 People demonstrate outside the Iranian embassy in Ukraine on October 17, 2022 in Kyiv, after the city was hit by swarms of kamikaze drones sold by Iran to Russia, leaving at least three dead (Getty) 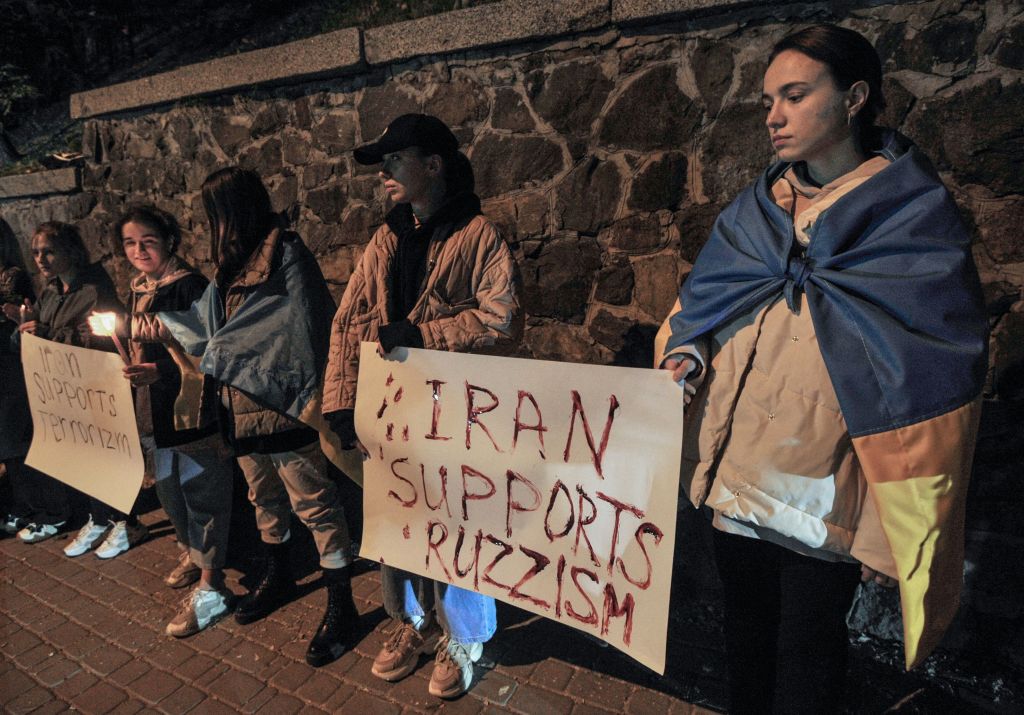 The US must punish Iran for aiding Russia

Russia’s brutal war in Ukraine has been disastrous for Vladimir Putin, but it has been a boon for the Islamic Republic of Iran. Western nations are increasingly concerned about Tehran’s profitable cooperation with Moscow, as Iran leverages Russian desperation to fuel its own ambitions.

So far, Iran has sent hundreds of drones to Russia along with training personnel, and may soon send ballistic missiles. Tehran has continued its malign activities in the Middle East as well, attempting to steal American drones and blind American ships, attacking and endangering American forces and personnel, and supporting destabilizing groups...

Russia’s brutal war in Ukraine has been disastrous for Vladimir Putin, but it has been a boon for the Islamic Republic of Iran. Western nations are increasingly concerned about Tehran’s profitable cooperation with Moscow, as Iran leverages Russian desperation to fuel its own ambitions.

So far, Iran has sent hundreds of drones to Russia along with training personnel, and may soon send ballistic missiles. Tehran has continued its malign activities in the Middle East as well, attempting to steal American drones and blind American ships, attacking and endangering American forces and personnel, and supporting destabilizing groups such as the Houthis in Yemen. Iran has also ruthlessly repressed widespread protests at home.

America needs to respond to Tehran’s provocations and punish it for aiding and abetting Putin’s genocidal conflict. The problem facing policymakers, however, is that there are not many easy options available, as Iran is already heavily sanctioned and has ready partners in both Russia and China. Targeted sanctions have been applied to those providing arms to Moscow, but they’re unlikely to change much given how insulated Iran’s economy is.

Sanctions should still be used when and where they are possible, but there must also be harsher measures. A policy paper from the National Security Institute at George Mason University suggests one option. Though referencing previous protests, the report suggests taking a more proactive role in supporting dissident movements in Iran, not by providing money or covert assistance, but by making sure the Iranian regime cannot succeed in curtailing the use of the internet or information sharing platforms. These have been key to keeping pressure on the regime, as protesters around the country can document and share the abuses of government forces. Unsurprisingly, Tehran has blocked internet access in response.

The same paper also suggests moving to bolster the defense capabilities of the region. Concretely, this would mean making sure allies such as Saudi Arabia and the UAE have the military capacity to thwart Iranian activities, whether it be attacks through proxies or by Iran itself. America would also do well to deploy new assets and maintain its current ones in the region to deter attack; that means not withdrawing forces from Saudi Arabia in retaliation for the next inevitable brouhaha with the regime there.

Iran has bases all over Syria, and both Iranian Revolutionary Guard Corps (IRGC) troops and proxy forces throughout that war-torn country. With Russia’s influence there reduced by the war in Ukraine, Iran’s has only grown. Syria is critical territory for Iran, allowing it access to terrorist groups located near Israel, including Hezbollah, Hamas, and Palestinian Islamic Jihad. Iran’s proxies also provide access to Iraq, which gives Tehran a direct line from the Islamic Republic to Lebanon, known as the “Shiite Crescent.” All of this is vulnerable to American forces, which are already present in the region, including about 900 in Syria.

The United States could give Iran an ultimatum: if it continues to provide weapons to Russia — particularly if it begins supplying ballistic missiles — its bases, ammunition dumps, and supply lines in and around Syria will be threatened. This can be done through air power alone, because the aim is not to kick out Iranian forces, but rather to inflict pain for its continued presence. Strikes should be targeted and carefully planned to minimize casualties, and should also be calibrated to Iranian actions, becoming progressively more severe as Tehran supplies weapons to Russia.

The idea is to teach Iran a lesson and induce it to back down. Solidarity and communication with America’s regional allies would be key, because Iran will undoubtedly escalate to some degree. Any strikes should be done only after ensuring that allies both understand and are equipped to deal with the potential consequences. Many of those allies, which would like a more energetic US presence, would likely appreciate a shift to offensive deterrence, particularly if an ancillary effect is to deter Iran’s nuclear ambitions. Under Biden, America’s regional presence has been largely reactive, which does not provide the deterrence necessary to rein in Iran. Israel, which is already hitting Iranian forces in Syria, may even be a willing partner in strikes.

This would not mean another intervention in the Middle East. It means a limited putative action in response to a threat to the American-led global system. The less support Moscow gets from third parties, the faster its stocks of weapons and ammunition will empty, and the sooner Ukraine will be able to win the war. Otherwise, this conflict will drag on, imposing more suffering and death on Ukraine, and further harming economies around the world. And Iran will only become bolder and more threatening to America’s security.