The radical alternative to a hospital birth 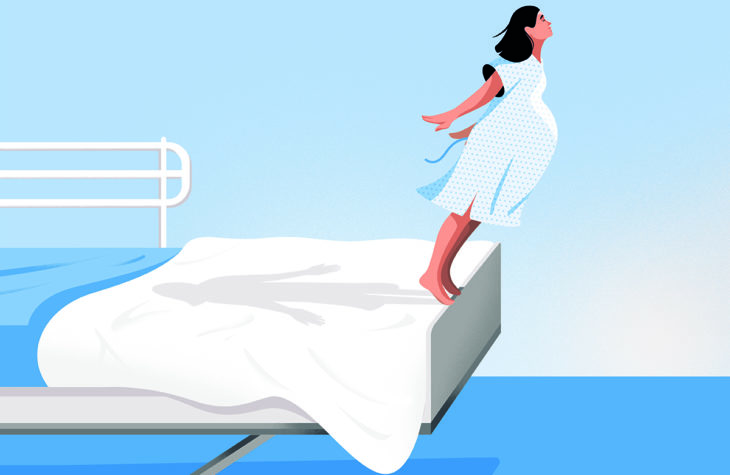 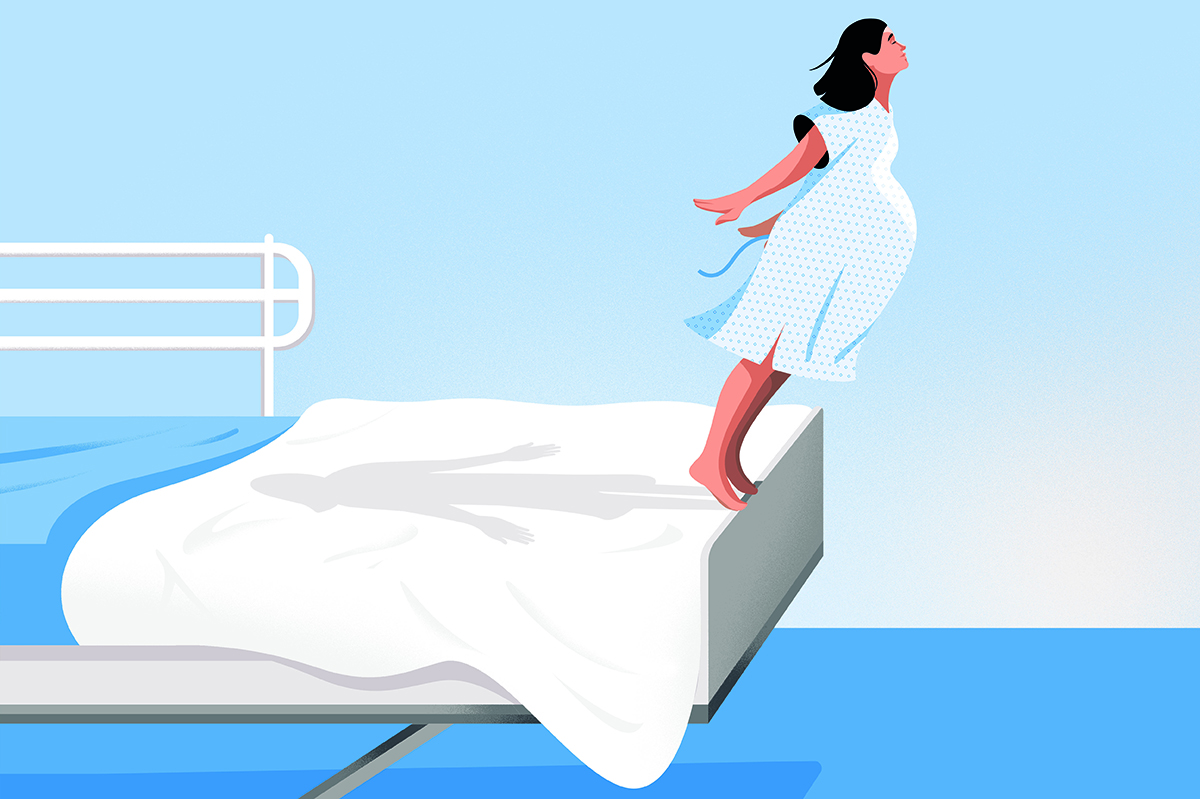 The radical alternative to a hospital birth

Giving birth hurts. A lot. Like any other major physical feat, it’s risky, but it’s not the inherently dangerous medical event some have come to believe. Plenty of women know this. Many are skeptical of the need to give birth in a hospital. But some are taking things further, deciding to forgo medical care entirely and give birth at home totally unassisted.

Free birth, or unassisted birth as it’s called by most birth workers, is an intentionally unassisted birth: no professional, no midwife, no nurse, no doctor. For hardcore freebirthers, even having a doula present for your...

Giving birth hurts. A lot. Like any other major physical feat, it’s risky, but it’s not the inherently dangerous medical event some have come to believe. Plenty of women know this. Many are skeptical of the need to give birth in a hospital. But some are taking things further, deciding to forgo medical care entirely and give birth at home totally unassisted.

Free birth, or unassisted birth as it’s called by most birth workers, is an intentionally unassisted birth: no professional, no midwife, no nurse, no doctor. For hardcore freebirthers, even having a doula present for your birth means you’re not doing it properly. Thanks to Instagram and one very compelling podcast called The Free Birth Society, the movement is growing.

On the podcast, women are interviewed about their unassisted births at home (or out in the woods, in the mountains, on the beach, in a snowed-in yurt). Although unassisted birth is not illegal, it is scorned by almost everyone outside the free birth community. Families who choose to have their babies without the assistance of midwives or doctors are vilified as irresponsible, reckless psychos who put their babies at risk for no good reason. 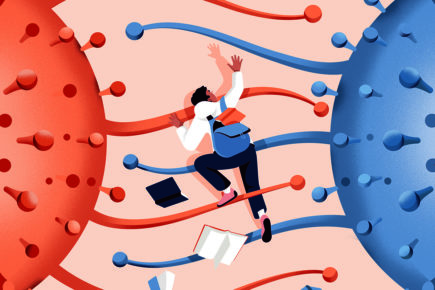 The lost boys of Covid

Is that a fair characterization of the freebirthers? I’m studying to be a home-birth midwife and even I don’t blame these women for wanting to birth unassisted. Nor will I shame or judge them the way most people have. But the fascinating thing, whatever one’s view, is the way that this once fringe, largely unknown group of unassisted birthers has bloomed into both a massive online community and even a highly profitable cottage industry.

When I first stumbled across the freebirthers, I expected all the mothers to be of a very particular, New-Age bent. Listening to the Free Birth Society podcast or scrolling its Instagram, I found some of the freebirth women were exactly as I expected: gregarious Burning Man-goers who downloaded their birthing plans during ayahuasca journeys with their shaman baby-daddies. There are Vegan-American expat yoga-teachers in Costa Rica. Some of them name their babies Aya and Ganja. On the FBS website these women can buy birth affirmation cards, $75 tickets to a virtual “Matriarch Rising” festival, or exclusive access to a freebirth forum with other like-minded mothers for $500 annually. (I can’t actually say whether these things are good or bad; I am blocked by a paywall.) It is clear, though, that this content is inspiring a lot of people one would think unlikely to choose unassisted birth.

Because many freebirthers don’t fit the stereotype. Some of the women interviewed on the podcast are straitlaced military wives on army bases who want to avoid another unnecessarily traumatic birth with a despotic doctor on call. Others are labor and delivery nurses who wish to avoid hospitals at any cost after they witness firsthand the cascade of unnecessary interventions that most mothers face in labor wards. There are incredible stories and videos of very earnest, normal women birthing surprise twins safely in their bathrooms. As these accounts demonstrate, in the case of most uncomplicated, low-risk deliveries, birth works, regardless of someone’s spiritual belief system. Some of the stories are genuinely inspiring.

The podcast host, Emilee Saldaya, is ferocious in her indictments of hospital birth and has no problem interjecting loudly during her interviews with women who testify to the trauma of their first births. If, for example, a woman was subjected to a dozen painful cervical checks during labor, Saldaya calls it “medical rape.” There is an undeniable cult of personality surrounding her as the “revolutionary” leader: she’s loud, boisterous and an adroit businesswoman.

Saldaya developed her $399 Complete Guide to Freebirth course with Yolande Norris-Clark, a very pretty mother of eight children (six of them born unassisted) with a penchant for going on breathy Instagram rants about everything from mass depopulation agendas (depop) to justifications for the Free Birth Society’s course fees. In some of the videos she radiates serious Patrick Bateman energy: reckless assuredness, genuine vitriol for others, and, of course, vanity.

Saldaya seems more like Guru Jagat, the ill-fated internet-age icon from Los Angeles who started a loud and proud branch of Kundalini Yoga Studios and died tragically of a blood clot after foot surgery only four years after publishing her book Invincible Living. Jagat was absolutely serious about both spirituality and making money, and women flocked to her for guidance and assurance. It’s not hard to see why desperate women would gravitate toward someone similar, who promises to provide the knowledge and freedom to birth “in sovereignty.”

For those unfamiliar with the current state of our industrialized birth world, it’s not exactly a great situation for women having babies (or, as some people now call them, “birthing people”). If you spent just five minutes talking to most obstetricians or even the majority of parents in America, you’d think childbirth might be the most dangerous evolutionary catastrophe on earth. More than 32 percent of all births in the United States end in major surgery; more than half a million of these surgeries are considered unnecessary by the World Health Organization. Caesarean section has overtaken open-heart surgery as the most routinely performed major operation in America. If women aren’t given C-sections, they can often expect to have their babies vacuumed or pulled out of them, or to have their vaginas cut open to speed up the delivery, which is often slowed significantly by routine use of spinal analgesia and powerful labor-induction drugs. Contrary to popular belief, birth in the hospital is actually becoming more dangerous the more interventions we add, and the infant-mother mortality rate is sky high with no signs of waning.

Laboring women and their babies are heavily surveilled, hooked up to a panoply of wires, urinary catheters, fetal monitors and ultrasound machines, denied food and water, movement, support, or pretty much anything that would ensure a physiologically peaceful birth. One-third of all women birthing in hospital leave with actual psychological (and physical) trauma. Many of these mothers, fed up with Foucauldian levels of biomedical surveillance, flock to midwives practicing in birth centers or home settings. These midwives are heavily regulated and must enforce rules based on our culture’s skewed ideas of medical risk. Their practices subject pregnant women to the same litany of ultrasounds, interventions, and tests the mothers were trying to escape in the first place.

A gracious midwife recently told me that the movement toward unassisted birth was bound to happen as midwives face more and more restrictions and regulations, thanks to the powerful lobbying groups in Big Obstetrics who have successfully pushed more than 96 percent of all births into hospitals. Tensions between traditional midwives and these “medwives” contribute to more women choosing to birth unassisted.

Many midwives working at home-births and freestanding birth centers advocate for more medical intervention, like the right of non-nurse midwives in certain states to access IV drips for out-of-hospital births. Proponents say that this will keep more women out of the hospital, allowing, for example, for IV antibiotics when a mother tests positive for Group-B strep, a potentially dangerous infection that can be transferred to the infant during birth. Other midwives assert that by the time a woman needs an IV for anything, she should be moved to a medical setting.

One of the books freebirthers refer to the most is a cult, fringe work called Unassisted Childbirth by Laura Kaplan Shanley. It contains shimmers of the New Age movement: mind transcends matter and women are told they can manifest the births they want. Shanley, who birthed all four of her children unassisted, claims that the mind is fundamentally responsible for creating our reality. This is especially true during birth, she argues, where a fearful mother in fight-or-flight mode can lead to poorer outcomes — a successful birth usually requires the laboring parent to be relaxed in an environment that she perceives as totally safe. She isn’t necessarily wrong about that. Birth, like sex, is an incredibly intimate and vulnerable situation dependent on psychological wellbeing. Can you imagine trying to have sex in a sterile, fluorescent-lit hospital room with doctors and nurses crowding you with threats to speed it up or get sliced open? Probably not.

Home-birth midwives, at least the really good ones, always respected the sexual and private nature of birth while simultaneously acting as a presence of safety and experience to help the parents if some complication were to arise, and sometimes they do. The most dangerous part of birth is usually the period after birth, when mothers can hemorrhage and even die from blood loss. Midwives keep a sharp eye on this process and carry medications that stop excessive postpartum bleeding. I’ve heard from at least two midwives that when a woman is in a hemorrhage situation, it is, as you might expect, difficult for her to handle by herself. But I’ve also heard that by purchasing the Complete Guide to Freebirth online course from FBS for $399 I can learn everything there is to know about birthing unassisted, even though humans quite obviously evolved to birth with support from other women; even chimps have other females present when they birth. Sometimes the male chimps get jealous and eat the baby, but that’s a different story.