The problem with America is not Donald Trump 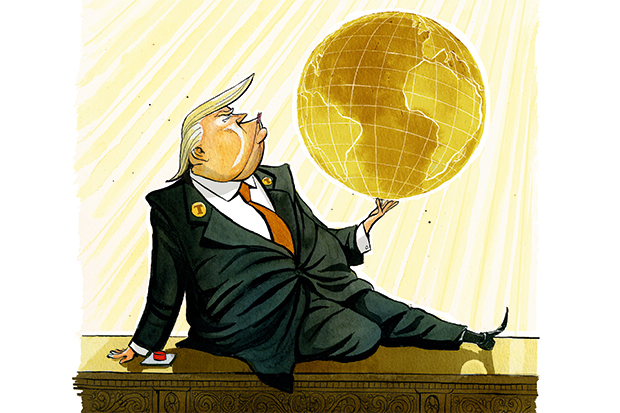 The problem with America is not Donald Trump

Something has gone horribly wrong in America, but it isn’t Donald Trump. The 45th president’s first year has in fact been a very good year for the country. By the time those 12 months were up, the unemployment rate was the lowest the country had seen in 18 years, and the number of new filings for unemployment benefits was at a 45-year record low. Even black Americans were doing better under Trump than they did under the first black president: by the start of 2018 the black unemployment rate was the lowest it had been...

Something has gone horribly wrong in America, but it isn’t Donald Trump. The 45th president’s first year has in fact been a very good year for the country. By the time those 12 months were up, the unemployment rate was the lowest the country had seen in 18 years, and the number of new filings for unemployment benefits was at a 45-year record low. Even black Americans were doing better under Trump than they did under the first black president: by the start of 2018 the black unemployment rate was the lowest it had been since the Bureau of Labor Statistics started keeping count. For all that his enemies insist that Trump’s electoral appeal was really about race, in 2016 Trump made jobs the centrepiece of campaign. And now Americans are working again in numbers not seen since the tail end of the booming 1990s.

Wall Street has also enjoyed a sustained rally since Trump became president. In the wake of the tax reforms passed by the Republican Congress and signed into law by Trump, major corporations that had been sheltering money overseas have announced they are repatriating the profits, with Apple leading the way and bringing home most of the $252 billion the company has been holding overseas. That will generate an immediate windfall to the U.S. Treasury to the tune of $38 billion. And that’s just one company.

Taxes will fall for some 70 percent of Americans once the new law takes effect. Trump has delivered on what the pro-business and anti-tax base of the Republican Party expects, though the country as a whole will benefit as a result. (Trump has not yet, alas cut spending to offset the tax cuts’ impact on the deficit, but these are early days yet.) Conservatives and all Americans who believe in a strict interpretation of the U.S. Constitution can also celebrate victory in the appointment of Neil Gorsuch to the Supreme Court, a wise pick by Trump, whose judicial appointments have almost uniformly been in keeping with the Republican right’s expectations. On the economy and on judges, this is the most success conservatives have had since the Reagan era.

Trump has been a stalwart on religious liberty as well, increasing protections for believers (not just Christians) who felt their freedoms being whittled away under the socially progressive—or gradually revolutionary—Obama administration. Yet this does not mean that legal protections for sexual minorities have been compromised. As the libertarian Cato Institute’s Walter Olson has noted, ‘the “assault on LGBTQ equality” predicted by the Huffington Post and many others hasn’t happened’ and while ‘organized gay and anti-gay groups keep their respective bases in a constant state of alarm,’ in fact ‘the actual course being steered is centrist.’

Something similar can be said about foreign policy under Donald Trump. Hawkish neoconservatives who pine for the good old days of the Iraq War lambaste Trump and his administration as ‘isolationists,’ while Obamaphiles claim that Trump and his gang are about to start World War III. Yet here too, Trump has avoided the extremes, by instinct if not by grand design. The campaign against Isis proceeded with focus and firmness, robbing the would-be caliphate of the territory it had infested. The demands of the hawks—the Hillary Clinton types not less than the George W. Bush fan club—for fighting two wars at once in Syria, against Bashar Assad as well as Isis, were largely ignored by Trump and his team. This is not to say that there are not grave risks in the commitment of U.S. troops, even in small numbers, to parts of Syria to underwrite nation-building efforts. In Syria and in Afghanistan, Trump has not yet managed to find a way out of the trap of indefinite military commitments to secure a simulacrum of peace. But in this, Trump is no different from Obama or Bush. Where he is different is in so far avoiding the temptations of ‘regime change’ of the sort that Bush carried out in Iraq and Obama in Libya. Although such misadventures are often undertaken in the name of ‘promoting democracy,’ what they actually amount to is promoting Islamist radicalism.

North Korea remains a nuclear nuisance, as it has been for decades. Trump’s personal approach to dealing with Kim Jong-un, via Twitter, is unorthodox, to say the least. But orthodox efforts by the U.S. foreign policy establishment to prevent North Korea from further developing its missiles and nuclear weapons have proven unsuccessful. The challenge calls for creativity—which is not to say that Twitter diplomacy is the way to go. But the rethinking that must take place about U.S. policy toward North Korea, and in East Asia more generally, must be institutional, and it must be profound: not the president, but strategists at all levels of government, and outside of it, have to look with new eyes upon the most populous and potentially hazardous region of the world.

Trump’s domestic record is superb, and in foreign policy he has yet to repeat the follies of his predecessors, though the task of reorienting American strategy—away from hegemonism and delusions of global policing—of necessity proceeds at a painfully slow pace.

Similarly slow is the pace of changing other politicians’ minds about infrastructure and industrial policy. Trump understands the need for greater investment in infrastructure, and the sheer insanity of the United States attempting ‘nation building’ abroad while roads, bridges, and schools fall to pieces at home was one of Trump’s most effective themes on the campaign trail. Trump likewise knows better than the lifelong politicians in both parties that American workers suffer as a result of being abandoned by their government while other countries practice open or covert economic nationalism. Yet very little will happen on either of these fronts until Republican politicians in Congress and the states wise up. Donald Trump is only the beginning of a populist retrenchment, one that faces great adversity from a well-entrenched globalist political class.

And that, rather than anything to do with Trump’s presidency, is what has gone horribly wrong in America. The broader ruling class in the country, the wealthy and politically connected, the best educated and most widely heard, have abandoned their countrymen. The very concept of citizenship, to say nothing of placing one’s fellow citizens above those whose loyalties are to other states and cultures, has fallen out of vogue among America’s most privileged. The nation and the citizen have been the core of Donald Trump’s appeal-the common denominator in his emphasis on immigration, jobs, industry, and America First in foreign policy—yet even within his own party, the globalist ideology of the 1990s staggers on. This, and not Donald Trump’s temperament or tweets, is the real menace to the country: an elite that has lost the trust of the people because the people knows what the elite will not admit—namely, that it despises them.

Daniel McCarthy is editor of Modern Age: A Conservative Review.