We need to talk about Kevin

Is the GOP House leader’s relationships-first style of politics a vital asset or a fatal flaw? 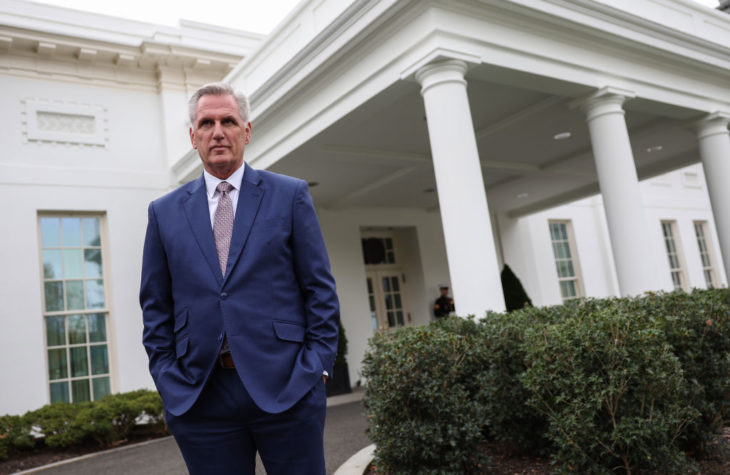 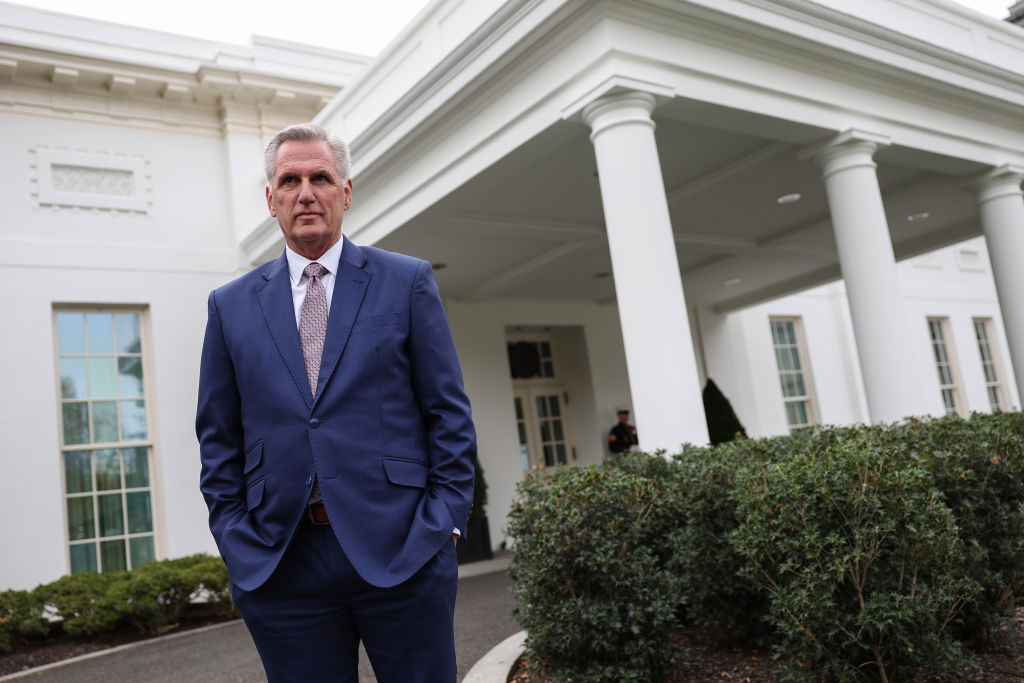 We need to talk about Kevin

Even doomed political campaigns throw victory parties — or pretend to. No-hope candidates have to keep up the pretense that they’re in with a chance — right down to the election-night canapés. On election night last month, a gathering of Republicans at a hotel in downtown Washington was set to be the real deal. To the assembled RNC employees, Hill staffers and assorted hangers-on, winning was a certainty and they were ready to celebrate. “Take back the house,” read the banners on the ballroom wall. The anticipatory chatter was of the margin of victory. All...

Even doomed political campaigns throw victory parties — or pretend to. No-hope candidates have to keep up the pretense that they’re in with a chance — right down to the election-night canapés. On election night last month, a gathering of Republicans at a hotel in downtown Washington was set to be the real deal. To the assembled RNC employees, Hill staffers and assorted hangers-on, winning was a certainty and they were ready to celebrate. “Take back the house,” read the banners on the ballroom wall. The anticipatory chatter was of the margin of victory. All of which is to say, the crowd was confident. None more so than the party’s host.

For Kevin McCarthy, November 8 was set to be more than just a very good night for his party. Sixteen years after he arrived in Washington, the Californian leader of Republicans in the House — a relentlessly industrious and shamelessly ambitious politician — was ready for the culmination of his political career. McCarthy would be speaking before midnight, his team advised. It would be a declaration of victory from the man set to take the gavel from Nancy Pelosi, becoming the highest ranking Republican in Washington and second in the presidential line of succession.

Then the vote counting started. Red-wave watchers struggled to spot anything outside Florida. At McCarthy’s do, optimism turned to nervousness, then nervousness turned to disappointment. As of midnight, the House GOP leader was nowhere to be seen. When McCarthy finally addressed a thinning crowd at 2 a.m., hours after the party was supposed to have wrapped, he did his best to feign enthusiasm: “When you wake up tomorrow, we will be in the majority and Nancy Pelosi will be in the minority,” he predicted.

It would be another week before the networks called the House for the Republicans. The result — a majority of 222 to 212 — was a disappointment for the party. For McCarthy, it has become a career-defining headache. Rather than the smooth accession to the speakership with which he thought he’d close out 2022, McCarthy is locked in a desperate fight for survival in which he can only afford to lose a handful votes between November and the all-important early-January House-wide vote. On this fraught journey, McCarthy had some early success, winning a mid-November vote to secure his party’s nomination for speaker. But with five Republicans — all of them members of the hardline Freedom Caucus — having gone public with their refusal to back McCarthy, the margins could hardly be tighter. And while a viable alternative remains elusive, McCarthy has a long holiday period ahead.

The fight is now about more than who holds the gavel come January; it’s become a GOP proxy war in which boisterous factions throw their weight around. Whether McCarthy survives or not depends on whether his ideologically flexible, relationships-first style of politics is a vital asset or a fatal flaw. Does it make him the man who can bridge his party’s yawning divides, playing all sides to make it to the top — or does it leave him caught in the middle, no one’s enemy, but without enough true friends?

Kevin McCarthy was born in Bakersfield, in California’s central valley, in 1965. McCarthy grew up in a blue-collar family in this blue-collar city. The son of a firefighter, McCarthy married his high school sweetheart and, aged nineteen, dropped out of college when he won the lottery.

“I scratched off my first ticket, all three. The most money you could win was $5,000. I scratch three of them and all three of them say $5,000. And I had never played the game before so I go back up to the checker and say, ‘You know, as I read this: did I win?’ I was one of the first winners in California,” he explained to high-school students in 2005. With the winnings, he set up a deli in his hometown. The deli would become his political origin story: radicalized by the owners regulations he faced as a small-business owner, he would later claim, he sold up and went into politics. That started with an apprenticeship under Bill Thomas, his local congressman and a stint in the State Assembly, before running for his old boss’s seat after he retired, in 2006.

McCarthy still conducts himself in a way you might expect a son of Bakersfield: he comes across as an easy-going and upbeat Californian proud of his fairly hardscrabble central-valley roots. When he arrived in Washington, he made much of the fact that he lived in his Hill office, folding out a camp bed after a long day’s work, a continent away from his family

In 2011, after a red wave really did sweep a large group of Republican freshmen into Congress, McCarthy, who himself had only been in Washington for four years, became majority whip and fashioned himself a mentor to green-behind-the-ears Tea Party insurgents. In When the Tea Party Comes to Town, the journalist Robert Draper describes McCarthy’s office during that time as “the freshman class’s unofficial flophouse, where they would go to filch a granola bar, have an evening glass of wine, or duck away momentarily from the demands of their own offices across the street.”

McCarthy has never been mistaken for an ideologically motivated lawmaker. An old-school politician in the backslapper mold, he has always put relationships ahead of principles. That means bonding with some of his most outlandish GOP colleagues. It also means doing Solidcore with Kyrsten Sinema. As majority whip, McCarthy had a mantra that summed up his approach neatly. “You can’t have too many friends,” he was reportedly fond of saying back then.

“His biggest strength is his personal relationships,” says a former House leadership aide. “His ability to know the needs of every member of his conference. He’s not a Newt Gingrich; he’s not a policy ideas maven. Nor is he someone like Paul Ryan or John Boehner, who each had a big overwhelming policy goal and worked through Congress in order to accomplish those goals. I don’t see any evidence that Mr. McCarthy has some grand policy or ideological goal, but I think in some ways that makes him the right manager of the team for the moment.”

In 2015, McCarthy would be reminded of the truth of his own motto. When then-speaker John Boehner announced his retirement, McCarthy was the frontrunner to replace him. But he withdrew his candidacy after failing to garner enough support. Two things torpedoed that effort: the first was an on-air gaffe in which McCarthy suggested that Republicans were only interested in investigating the Benghazi debacle to land blows on then-presidential candidate Hillary Clinton. The second was an unconfirmed (and now largely unmentioned) rumor that he’d had an affair with a fellow Republican representative. Behind both these explanations, though, was a bigger problem for McCarthy: that support for him among his colleagues just wasn’t as strong as he had thought. Since then, McCarthy has doubled down on his approach, determined to solidify the relationships he needs to succeed were he failed seven years ago.

The years since Trump transformed the GOP have tested McCarthy’s that relationships-first approach like nothing else before. Throughout it he has been a canny relationship builder, forging close ties with firebrand Georgia congresswoman Marjorie Taylor Greene, while also managing to keep the moderates onside, for example. That requires charm and savvy, but also a level of degree of shamelessness not uncommon at the top of politics.

When it comes to McCarthy’s relationship with Trump himself, things have been up and down. Early in the Trump presidency, as House Majority Leader, McCarthy became an effective go-between for the White House and Republicans on the Hill. Trump took to calling him “my Kevin” and once said “Kevin would call me in the heat of battle… Kevin during the heat was there for us and I appreciate it.” After Trump supporters rioted at the US Capitol on January 6, 2021, McCarthy said Trump bore “responsibility” for the attack, but later that month paid a visit to Mar-a-Lago to patch things up with the former president. This year, the New York Times released audio of McCarthy on a conference call with House colleagues in which he said he’d “had it with this guy.”

McCarthy has survived his multiple about-turns on Trump in the first few weeks of 2021, once again proving that a lack of embarrassment is something that will serve you well in politics. He close enough to being in the former president’s good graces to avoid the sort of vitriol aimed at his counterpart in the Senate, Mitch McConnell.

The absence of outright opposition to McCarthy from Trump is one of the biggest obstacles to the Freedom Caucus campaign to stop him. A flurry of public declarations of opposition from the likes of Matt Gaetz and Andy Biggs last month has not snowballed into a movement big enough to topple McCarthy. And in the weeks after November’s disappointing results, McCarthy worked overtime to prove his conservative bona fides. He flew to the southern border and threatened the impeachment of Homeland Security secretary Alejandro Mayorkas. He has talked up plans to investigate the Biden administration. And he has taken a hardline in year-end negotiations over government funding.

An even bigger obstacle — and the thing that may ultimately prove the decisive factor if McCarthy secures the speakership — is the conspicuous absence of a viable alternative. Biggs, the leader of the anti-McCarthy effort, ran for the party nomination last month and secured just thirty-one votes. This week he announced he once again hoping to derail McCarthy by running for speaker ahead of next month’s House vote. “I’m running for Speaker to break the establishment. Kevin McCarthy was created by, elevated by and maintained by the establishment,” Biggs tweeted.

But Biggs and his merry band of pranksters can only get so far with their wrecking-ball approach. Or that, at least, appears to be McCarthy’s bet. In a cable-news interview on Monday, McCarthy warned against “playing games” and suggested that a chaotic showdown on the House floor could end with a Democratic speaker.

Meanwhile, the moderate Main Street House GOP caucus has backed McCarthy. In a letter aimed at wavering conservatives, they urged “all our colleagues in the People’s House to join us so that we can immediately begin delivering the common-sense, impactful, and conservative agenda Americans expect and deserve.” Nebraska congressman Don Bacon warned: “We’re not going to be held hostage.” Other McCarthy supporters deny the opposition is a serious threat. “It’s a done deal. I think this is all theatrics,” Texas lawmaker Tony Gonzales told the Hill. “Imagine a place like this having theatrics right before a major vote.”

Whether or not he succeeds, McCarthy’s scramble for the speakership is his bridge-building, relationships-first career in microcosm, and the January vote will be a reminder — maybe sweet, maybe bitter — that you really can’t have too many friends.