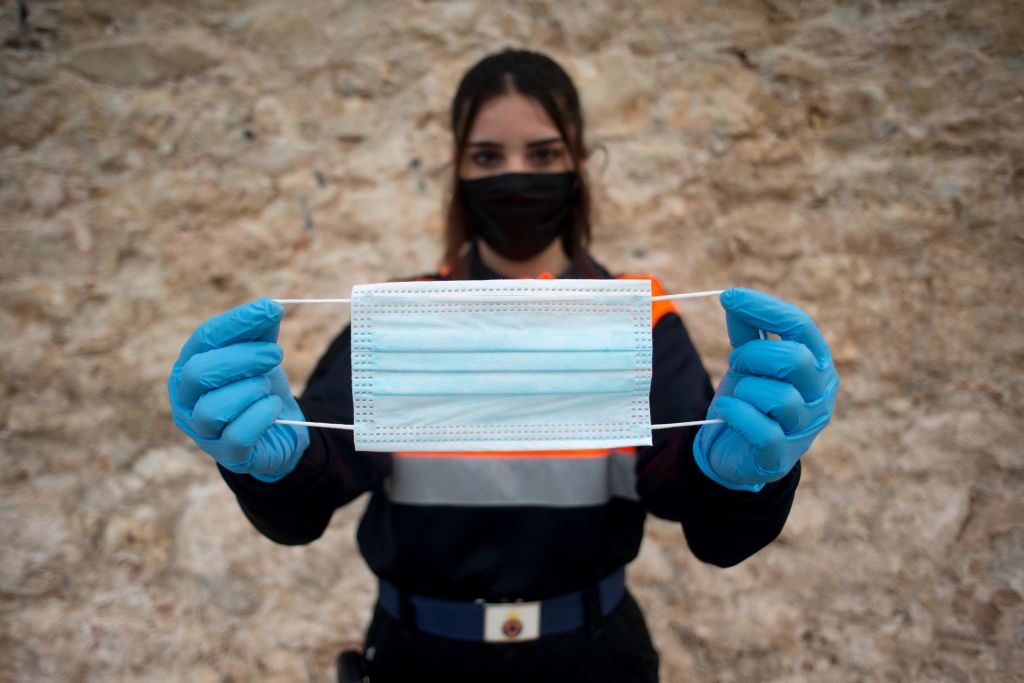 Spain has a reputation for having some of the strictest policies on masks in Europe, with the public even encouraged to wear face-coverings outside. Yet on Saturday, Spain’s Health Ministry announced that the number of coronavirus cases has continued to rise, with 9,848 cases counted over the past two days — prompting those who live in Spain to question, yet again, the efficacy of mask-wearing regulations.These uncomfortable, claustrophobic pieces of cloth are often described as being compulsory in public in Spain, which perhaps implies that they have to be worn from the moment you leave...

Spain has a reputation for having some of the strictest policies on masks in Europe, with the public even encouraged to wear face-coverings outside. Yet on Saturday, Spain’s Health Ministry announced that the number of coronavirus cases has continued to rise, with 9,848 cases counted over the past two days — prompting those who live in Spain to question, yet again, the efficacy of mask-wearing regulations.

These uncomfortable, claustrophobic pieces of cloth are often described as being compulsory in public in Spain, which perhaps implies that they have to be worn from the moment you leave your house to the moment you return, whatever the purpose of your excursion. But due to the glaring inconsistencies of the Socialist government’s preventative measures, this is far from the case.

You can sit on Spain’s glorious beaches without having to wear a mask, as social distancing is supposedly in place — although understandably it’s harder to observe, and therefore frequently flouted, in the sea. Spaniards are inveterate socializers, so the country’s bars and restaurants are packed once again after a stultifying lockdown, but customers need not wear masks inside. Tables are supposed to be the magic distance of 1.5 meters (five feet) apart, but it’s virtually impossible to maintain that gap at all times in a busy bar, especially in Spain. Waiting staff are required to wear masks but often drop them or take them off entirely to talk to friends who drop in for a drink while they’re working. And why not? It must be suffocating to wear one throughout a demanding shift on a sun-drenched terrace.

For a few weeks after lockdown ended, buses and trains were running at half capacity and you needed to wear a mask, raising the question of which safety measure was considered insufficiently protective in itself, and why. Social distancing has now been abolished on public transport but mask wearing has not. But why were masks compulsory when social distancing was also in place?

The same question arises when you consider the rules at concerts and cultural events, where seating plans are rearranged to accommodate social distancing but face masks are also required. At a flamenco recital I attended recently, a security guard roamed the widely-dispersed audience to check everyone had their safety gear on, walking up and down aisles separating two-seat ‘pods’. But if both measures are required to really minimize the risk of mixing with strangers in large groups, why are masks not required in bars and restaurants, and why isn’t some form of social distancing still compulsory on public transport?

According to the most risible rule of all, you can now be fined for not wearing a face mask when you’re walking down the street, regardless of how many other people are around or how close they are to you. Juxtaposed with the lax regulations in bars and restaurants, this results in some truly surreal situations. To take just one: my girlfriend lives above a bar that’s packed, inside and out, most nights of the week. When we head down for a few tapas at the weekends, we’re legally obliged to don a mask to cross the two-meter (six-and-a-half feet) patch of pavement that separates her apartment building from the bar. But once seated on the crowded terrace, surrounded by unmasked strangers, we can take them off. Whichever way you look at this combination of severity and laxity, it’s senseless.

Santiago Moreno, head of infectious diseases at Madrid’s Ramon y Cajal hospital, recently told Spanish daily El País why he was in favor of mandatory face masks at all times, even when social distancing can be observed — something the paper described as a ‘conceptual necessity’: ‘By being so strict, those who don’t meet [the rules] will feel like they are breaking the law’, said Moreno.

It’s hard to think of a more succinct or enthusiastic endorsement of Spain’s oppressive mask culture. Because the rules governing their usage are so inconsistent, and their efficacy far from obvious, the only decent reason to wear them now is to avoid a hefty fine by the over-empowered police. People who exercise a little situational logic and take their safety gear off on a street when there’s no one around won’t just feel like they’re breaking the law, they will be breaking the law. The threat of punishment, rather than a last-resort reinforcement measure, has become the sole good reason for wearing a mask in Spain. This is, without doubt, the weirdest and most lamentable aspect of the ‘new normal’ in which we live.