Putin’s version of history is neither original nor uncommon. On the contrary, it is shared by very many Russians 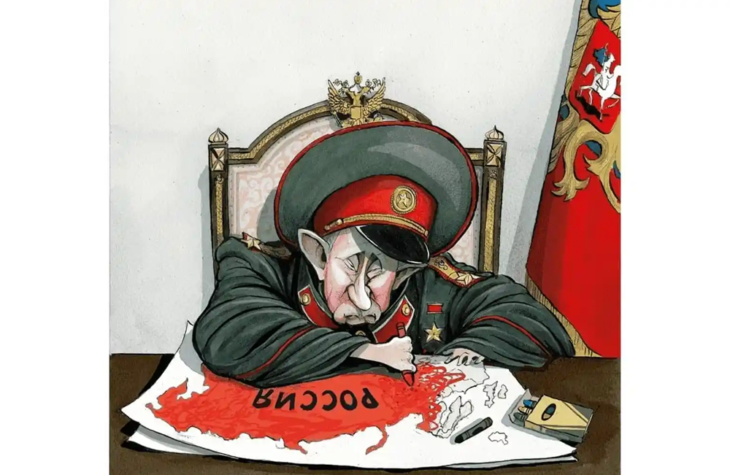 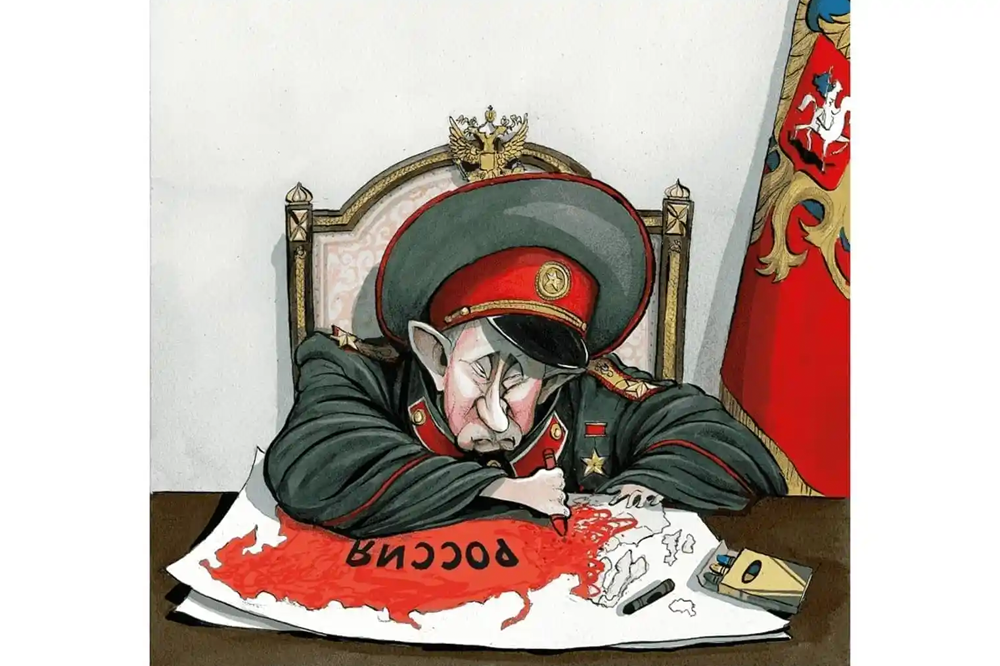 One hundred years ago this December, delegations from the core nations of the East Slavs, Russia, Ukraine and Belarus signed the "Declaration and Treaty on the Formation of the Union of Soviet Socialist Republics." They had with them representatives of the "Transcaucasian Soviet Socialist Republic" artificially constructed by the communists who had just won a horrifically bloody civil war. In theory it was a free association of states. In practice Stalin quickly imposed even more ruthless centralization than before. By the end of World War Two he had recovered all the territories of Imperial Russia,...

One hundred years ago this December, delegations from the core nations of the East Slavs, Russia, Ukraine and Belarus signed the “Declaration and Treaty on the Formation of the Union of Soviet Socialist Republics.” They had with them representatives of the “Transcaucasian Soviet Socialist Republic” artificially constructed by the communists who had just won a horrifically bloody civil war. In theory it was a free association of states. In practice Stalin quickly imposed even more ruthless centralization than before. By the end of World War Two he had recovered all the territories of Imperial Russia, and achieved domination of almost the whole of Eastern Europe.

On December 8, 1991, the Soviet Union was abolished by Russia’s president, Boris Yeltsin, and his colleagues from Ukraine and Belarus. This time there were only the three of them: they had intended, but forgotten, to invite the president of Kazakhstan.

And so, after less than seventy years the Soviet Union ignominiously ended. It had been little more than a bloody interlude in the long and tortured sweep of Russian history.

The length of this history is a matter of bitter controversy. For Russians it is obvious that their country is the direct descendant of the ramshackle state centered on Kyiv which was put together by a mixture of Swedish Vikings, Slavs and Finns early in the ninth century. From then until 1917 Russia was ruled by only two dynasties, the Ryuriks and the Romanovs: a sufficient demonstration, Russians think, of the essential continuity of the Russian state.

That is a proposition with which Ukrainians, Poles and many others strongly disagree. For them the history of the “Muscovites,” as they disdainfully call them, doesn’t start until the departure of the all-conquering Mongols in the sixteenth century. As Apollo Korzeniowski, the father of the Anglo-Polish novelist Joseph Conrad, who was imprisoned and exiled by the Russian imperial authorities, declared: ‘We Poles have suffered slaughter, conflagration, robbery, rape and torture in the hands of Muscovy. The whole of Muscovy is a prison… corrupted and infested with vermin.”

Russian scholars, journalists and politicians responded in kind. When the Poles rebelled in 1863, Fyodor Dostoevsky called it “the beginning of war between Russian Orthodox Christianity and Catholicism, between the Russian genius and European civilization.” In the 1930s the philosopher Ilya Ilyin — a Putin favorite — accused foreign supporters of Ukrainian separatism of “declaring an unending war against Russia.” That same thinking continued: in 1998 a Russian historian roundly announced that the Ukrainians “are unknown to history.” Such emotional interpretations of history provide much of the driving force behind Putin’s war in Ukraine today.

Poland was brutally erased from the map of Europe at the end of the eighteenth century by the emperors of Prussia, Austria and Russia. When all three empires were defeated in 1918 Joseph Piłsudski, Poland’s new leader, took the opportunity to assert his reborn country’s control over the territory. Polish armies captured Galicia in Ukraine and much of newly independent Lithuania: the capitals of both, Lvov (now Lviv) and Vilnius, had large Polish minorities. In May 1920 they captured Kyiv itself. A Russian counter-attack drove them back to the gates of Warsaw. There they rallied, resumed their advance, and forced the Russians to accept a peace which moved the Polish frontier 200 kilometers to the east.

The Ukrainians were less successful. Their state had been erased much earlier, when the Mongols destroyed Kyiv in 1240. Much later a shadowy substitute, the Cossack free state known as the hetmanate, flourished on Ukrainian lands in enthusiastic opposition to Poles, Russians, Swedes, Hungarians, Turks and Tatars. But in the eighteenth century the hetmanate was emasculated by Peter the Great and then abolished by Catherine the Great. In 1918 the Ukrainians managed to recreate a fragile state based on Kyiv. But the Poles and Russians moved back in, and Ukraine was divided once again. Western Ukraine became an underprivileged part of Poland. Kyiv and the rest of Ukraine remained in Soviet hands.

Before 1917 Lenin had spent most of his life in exile, maneuvering to achieve absolute power over a mere faction of his party. When he wasn’t intriguing against his colleagues, he spent his time writing turgid theoretical articles. One of these was “The Right of Nations to Self-Determination’ (1914). His argument was that the Czarist empire was “the prison of nations.” Russia could not become free to build socialism unless it ceased to be an imperial power.

Lenin came to power innocent of any government experience and — as it turned out — ruthlessly indifferent to the shedding of blood. But he said, and perhaps believed, that non-Russians needed protection against what he called “that really Russian man, the Great-Russian chauvinist, in substance a rascal and a tyrant.” He declared that his new revolutionary state was “established on the principle of a free union of free nations.”

Although the 1922 treaty which founded the Soviet Union was an unambiguously centralizing document, in which all policy of substance was firmly controlled by Moscow, it did provide the constituent republics with many of the formal institutions of government: foreign ministries, home ministries, defense ministries, economic ministries. It gave them the freedom to develop their national culture and languages which had so often been denied by the Czars. And its final paragraph explicitly stated that “each of the Union Republics retains the right to leave the Union freely.”

By the time the civil war stopped in 1922, the Bolsheviks had restored Russia’s imperial boundaries except in Poland and along the Baltic. Lenin’s policy of letting the captive nations go their own way was already being undermined by Stalin, the boringly effective administrator whom he had injudiciously put in charge of nationalities policy. As soon as Stalin had consolidated his power as Lenin’s successor, he cracked down with the utmost ferocity on those he considered guilty of “bourgeois nationalism” wherever he found them. He wiped out perhaps 80 percent of Ukraine’s creative writers and destroyed some four million inconveniently obstreperous Ukrainian peasants in the course of his disastrous collectivization of Soviet agriculture.

Stalin’s policies of ruthless centralization were continued by his successors, though they shed less blood. A ghostly trace of the right to secede nevertheless remained in Stalin’s Constitution of 1936 and its successor of 1977. But it was empty of legal reality until Gorbachev brought in a cumbersome but genuine secession law in 1990.

When Putin notoriously told the Russian parliament in 2005 that the collapse of the Soviet Union was the major geopolitical disaster of the twentieth century, he was not lamenting the end of communism. He told the New York Times: “Anyone who doesn’t regret the passing of the Soviet Union has no heart. Anyone who wants it restored has no brains.” He still roundly blames the Communists for the disintegration of an age-old state, and the reduction of Russia to a rump version of its former self, with tens of millions of Russians stranded in places that had formerly been part of the empire.

Last year he infamously published a long historical piece about Russia and Ukraine in which he railed against the way the Bolsheviks had casually redistributed large chunks of ancient territory belonging to what he called the “triune” Russian nation in which Russians, Belarusians and Ukrainians were inextricably mixed. The Bolsheviks’ constitutional provision for secession was, he said, “a most dangerous time bomb placed in the foundation of our statehood.”

The bomb exploded as soon as the Soviet Union collapsed. The Communists, like the Czars, had kept the empire together by bribery, repression and by as much force as was needed to do the job. Now, much to Putin’s disgust, the fake organs of government that Stalin had given the former Soviet republics provided the framework they needed to create the institutions of a real state.

Putin’s version of history is neither original nor uncommon. On the contrary, it is shared by very many Russians. My liberal Russian friends were deeply distressed when Ukraine became independent in 1991. Gorbachev’s judicious diplomatic advisor warned me that Moscow would have no choice but to use force if the Ukrainians tried to alter borders or change the status of Crimea. By January 1992 I could imagine the two countries going to war.

But for the next decade Moscow and Kyiv managed their difficult relationship prudently enough, reaching an agreement over the stationing of the Russian Black Sea Fleet in Crimea similar to the agreement on British sovereign bases in Cyprus. All was upset by Putin, who weaponized his view of history to justify his seizure of Crimea in 2014 and his all-out war against Ukraine this year.

History does not move in straight lines. Between 1870 and 1945 the French and the Germans fought three bloody wars to determine the frontier between them. They then chose the path of peaceful agreement. It is hard to imagine that either will ever challenge the border again.

Other European nations concluded after 1945 that the price of empire was too high. They found that extricating themselves was a slow, painful, and bloody business. When the Soviet empire flew apart remarkably quickly and with comparatively little bloodshed, I thought that the Russians were well on the way to recovering from their imperial itch. I was spectacularly wrong.

But the war with Ukraine will eventually end and Putin will go. The Russians will then have to work out why yet another attempt to hang on to empire has got them into such a mess, and what they should do about it. Perhaps they will try once more to transform themselves into the “normal” nation — prosperous, free, on reasonable terms with its neighbors — for which so many of them yearned in the last years of the Soviet Union.

That may be a dream too far: people are rarely that sensible. But it would be the best outcome both for the Russians and for the rest of us, who will have to live on the same continent with them for the foreseeable future.