Has Ben Sasse won it for Joe Biden? 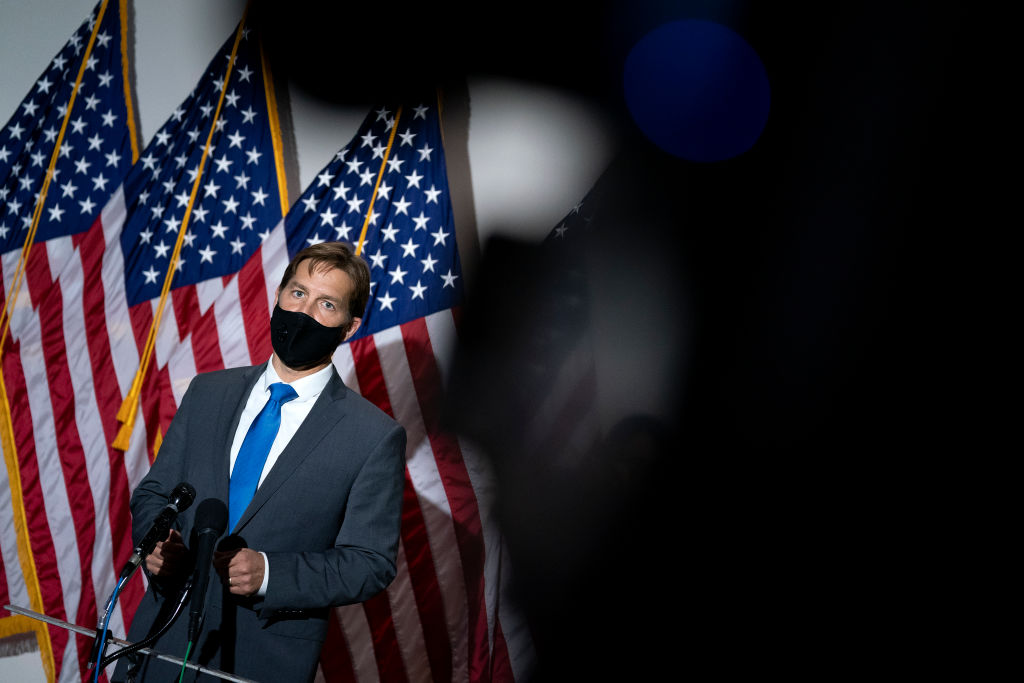 Has Ben Sasse won it for Joe Biden?

Will a Republican senator from Nebraska be the man who hands Joe Biden the White House? Ben Sasse has tried his best to do that.

Sasse easily won reelection in the safe red state of Nebraska on Tuesday, leading his Democratic opponent by nearly 30 points with 85 percent of the vote in. But President Trump has not fared so well; in fact, he lost the vote in Nebraska’s Second Congressional district. Since Nebraska, like Maine, divides its Electoral College votes by district, that means Joe Biden gets an elector from Nebraska. And for that, Biden...

Will a Republican senator from Nebraska be the man who hands Joe Biden the White House? Ben Sasse has tried his best to do that.

Sasse easily won reelection in the safe red state of Nebraska on Tuesday, leading his Democratic opponent by nearly 30 points with 85 percent of the vote in. But President Trump has not fared so well; in fact, he lost the vote in Nebraska’s Second Congressional district. Since Nebraska, like Maine, divides its Electoral College votes by district, that means Joe Biden gets an elector from Nebraska. And for that, Biden can thank Sasse, who next to Mitt Romney is the sitting Republican senator who has been most outspokenly critical of President Trump. Such criticisms have no impact nationally, but in Sasse’s home state, where he’s popular enough to win with two-thirds of the vote, his complaints about Trump matter. They matter enough to help Biden win an elector.

The Biden camp sees several possible paths to the White House after the former vice president’s disappointing performance on Tuesday. Most begin with winning Wisconsin, where the President’s lead on election night was slender. After that, any one of four states can give Biden enough electors to become president.

Michigan or Pennsylvania would do it, as would Georgia, if late-counted votes in the Atlanta area flip a state that was red on election night. Georgia is worth the same number of Electoral College votes as Michigan: 16. But one last way to win even if Biden can’t turn Michigan, Pennsylvania, or Georgia lies with North Carolina, where the President’s lead on election night, with 94 percent of precincts reporting, was under 2 percent. North Carolina is worth 15 electoral votes. Add those votes to Wisconsin’s 10 and Biden would be just one vote short of becoming president — without that Nebraska elector, that is. With the elector he won in Nebraska, Biden would have the 270 electoral votes to become president. And he’d owe a thank-you letter to Sen. Sasse.

There are likelier scenarios for Biden to prevail. But the Wisconsin-North Carolina-Nebraska possibility is a reminder that Republican infighting matters. So does Republican mediocrity. The GOP made a lethal mistake when it appointed Martha McSally to the US Senate from Arizona after she had just lost an election for Arizona’s other Senate seat in the 2018 midterm election.

Voters said ‘no’, but the GOP establishment said ‘Yes’. What happened next was predictable: on Election Day 2020, voters had the last word and they once again rejected McSally. They also apparently rejected President Trump, who trailed Biden by about 5 percent with 80 percent of the vote counted on election night. The president performed slightly better than McSally, who was probably a drag on Republican enthusiasm and turnout — a stronger senator, even one who was not perfectly in tune with the President, could have helped him. A more coherent Republican party overall could only have benefited Trump, but instead the GOP is still in many respects living in the pre-Trump era, where congressional candidates are concerned. The revolution in Republican thought and feeling that Trump embodied at the presidential level has not yet come to Congress. And there may be some in Congress who hope that Biden will prevail, precisely to stop Trump-style populism from disturbing their own tranquility.

American politics is full of irony as a result of the separation of powers. The two parties in Congress usually really do want their man to win the White House, too. But winning the White House is typically followed by losing seats in Congress in the next midterm elections. The quickest way for Republicans to retake the House of Representatives is probably under an unpopular Biden administration, and the best chance the Democrats have to take the Senate may be in the next midterms under President Trump. While most Republicans in Congress support President Trump anyway, the fact that the GOP is two rather different parties in one — a congressional party with a still somewhat pre-Trump ideology and the presidential party of Trump and populism — means that activists and intellectuals who sympathize with different tendencies in the GOP place a different priority on the electoral success of the presidential or congressional aspects of the party. Some movement conservatives are happiest with the government in Washington divided between a Democratic president and a Republican Congress (or at least, as now, a GOP Senate). To some, it looks like the optimum configuration for limiting the growth of government and advancing a libertarian-leaning conservatism.

The trouble is that this kind of conservatism amounts to slow-motion suicide. It produces a party suitable for opposition and critique but incapable of governing or winning presidential elections — which would be a bad thing anyway, from the point of view of those who really want divided government.

But government is not, in fact, divided simply because the president and a congressional majority are of different parties — after all, the regulatory powers that Congress has ceded to the executive branch are in effect legislative powers, and Congress has long since given up most of its share of responsibility for foreign policy as well.

Instead of acting as a check on presidential overreach in foreign policy, Congress often incites such overreach by passing moralistic resolutions demanding that the president pursue regime change in one foreign land or another. The result of a pseudo-libertarian, pro-Congress Republican party ideology is just a steady drift toward left-wing administrative statism and global interventionism, both of which hasten the decline of American self-government, the former in a direct manner, the latter by shifting the concern of elected officials to the rule of faraway peoples without representation. (A shift with certain implications for the way our own people are treated by our ruling class — if Washington can administer Iraq or Afghanistan or Libya, why can’t Washington administer America as well, without the hassle of popular consent?)

America has, in the Democrats, a troubled left-liberal party but one that is fully prepared to use the power of government. An opposition Republican Congress is a nuisance but not a threat; it can only postpone the inevitable. A populist Republican president, on the other hand, actually can change the direction as well as the magnitude of policy. Voters instinctively know this, and it’s why they support Donald Trump, a figure who, they believe, fights for them and can make a difference, as no Republican Congress (alone) can.

What advocates of conservatism and even right-leaning libertarianism want to achieve can only be accomplished by an active, presidential Republican party. President Trump has reminded them of that. But vanity, mediocrity, and complacency in the congressional party has threatened to derail Trump’s re-election, and if it is not checked it will derail the right’s hopes for 2024 as well.