A pathetic exhibition of virtue-signaling in Miami

‘Does she know about a thing called money?’, said my 11-year-old daughter 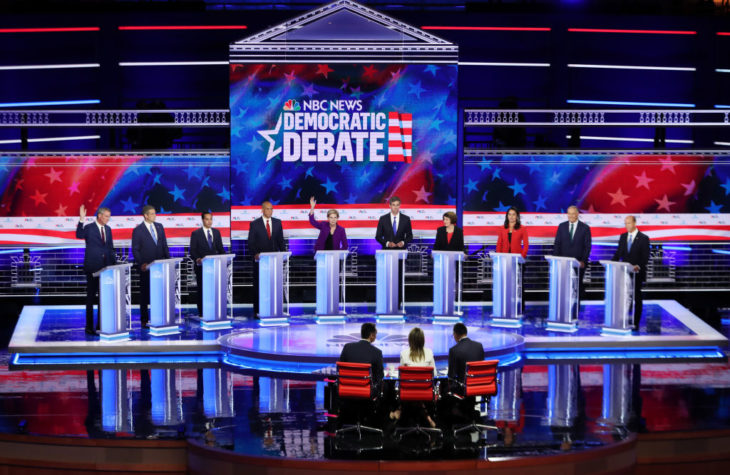 A pathetic exhibition of virtue-signaling in Miami

Aristotle explains all this in the Nicomachean Ethics. Knowing this, I felt badly watching the 'debate' among the first tranche of 10 Democratic aspirants to be their party’s nominee for president in 2020. I felt, I must admit, an immoderate excess of schadenfreude — tinged with revulsion, it is true, but the element of pleasing disdain...

Aristotle explains all this in the Nicomachean Ethics. Knowing this, I felt badly watching the ‘debate’ among the first tranche of 10 Democratic aspirants to be their party’s nominee for president in 2020. I felt, I must admit, an immoderate excess of schadenfreude — tinged with revulsion, it is true, but the element of pleasing disdain predominated. I am not proud of it. I merely record the fact.

But consider my provocation. Put your hand on your heart and tell me you do not smile when I tell you that tonight’s debaters were Sen. Cory ‘Spartacus’ Booker, Mayor Bill de Blasio (né Warren Wilhelm, Jr.), Rep. Robert Francis ‘Beto’ O’Rourke, Sen. Elizabeth ‘Fauxcohontas’ Warren, and six other candidates most of whom I am willing to wager you have never heard of:

Julián Castro, John Delaney, Tulsi Gabbard, Jay Inslee, Amy Klobuchar, and Tim Ryan, a truly special person who thinks we Americans are in the grip of a ‘climate crisis.’ (Or was that Jay Inslee? Who cares at this point?)

The second 10 candidates, God help them, are up tomorrow night. I shall be elsewhere, but do tune in if you wish to hear Joe Biden or Michael Bennet (who?) Pete Buttigieg, Kirsten Gillibrand, Kamala Harris, John Hickenlooper, Bernie Sanders, Eric Swalwell, Marianne Williamson, and Andrew Yang speak really quickly and non-consecutively in 60-second bursts.

Attentive readers will note that I put the word ‘debate’ in scare quotes. Why? Because the entertainment that was beamed out tonight from NBC was not a debate. It had nothing to do with debate. It was an exhibition — partly pathetic, partly amusing in a surreal sort of way — of sclerotic virtue-signaling.

This is where the bit from Aristotle comes in. Stepping back from the two-hour embarrassment to which the people of the United States were just subjected, I understand that the candidates had a tough assignment. Here they were, competing not only against themselves, but also against the most ostentatiously successful president in…well, maybe ever. Look at the white hot economy, the historically low unemployment figures, especially among blacks and other minorities. Look at the rising wages of the working class, the renaissance of manufacturing, the rekindled spirit of national self-confidence.

Love him or hate him, Donald Trump has presided over one of the most — I think it is probably the single most — successful opening years of any president ever. That’s a difficult record to run against. So what tonight’s 10 candidates did — and I am certain that tomorrow’s will as well — was to deny reality and pretend that they were running against the Donald Trump of their dreams: a dark figure whose policies hurt instead of helped average Americans, who was anti-black, anti-woman, anti-immigrant.

They skirled about the environment. About working families that were having trouble making ends meet. About ‘gun violence.’ About what a good idea it would be to open the borders, to give everyone government paid-for health care, to forgive student debt. Several candidates thought it would be a good idea to revive the ‘deal’ with Iran hammered out by the Obama administration: you know the ‘deal’ where we shoveled more than a billion dollars, cash, to the world’s largest exporter of terrorism while turning a blind eye on their program to acquire nuclear weapons.

The evening was full of piquant remarks. ‘If billionaires can pay off their yachts,’ Sen. Klobuchar said, ‘students should be able to pay off their student loans.’ OK. But Sen. Booker may have topped that when he said that ‘we do not talk enough about trans-Americans,’ especially ‘African-American trans-Americans.’ Do we talk about anything else?

The best comment I heard tonight came from my 11-year-old daughter. Walking into my study at one point and overhearing something Elizabeth Warren said about ‘corporations’ or ‘Medicare for All,’ she asked ‘does she know about a thing called money?’ We exchanged a meaningful glance because it was clear that neither Sen. Warren nor her Democratic colleagues know the first thing about money, a prerequisite for the job of president of the United States. Which is a major reason why none of them will have that title on their resumes, and thank God for small mercies.